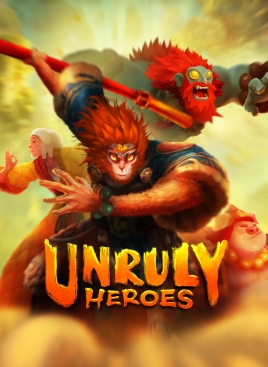 Sometimes, I just scratch my head when it comes to certain video games not getting any attention. Well, we all have those moments. Those times where you’d just like to bust out a megaphone and alert everyone to something that should be vastly more popular. Most recently, this is how I felt about Unruly Heroes, the debut action-platformer from Magic Design Studios. Ever since it was first unveiled, I pondered why this gorgeous, jam-packed, exciting,and cartoonish take on Journey to The West from a group of industry veterans wasn’t getting more attention. Was there something holding it back? Some sort of notable flaw that I couldn’t see for some reason? Was this a game that would be all flash and no substance? I was worried…

And then I finally played the full game. And all the worry disappeared. Yep, Unruly Heroes is an awesome game and y’all are crazy for not giving it more love.

As mentioned earlier, this is a story inspired by the classic tale of Journey to The West. A sacred scroll that keeps harmony throughout the land has been torn up, and our quartet of heroes are tasked by the princess to set out and recover it. It’s a simple story, one that mainly serves as an excuse for our heroes to get up to various shenanigans along the way, battling a series of colorful foes. And our leads are an equally colorful bunch, consisting of Wukong (monkey king), Kihong (voracious pig), Sanzang (narcoleptic monk) and Sandmonk (kind-hearted hulk).

Each one of them has to master their own unique traits and skills, be they gliding, double-jumps, different kinds of attacks, or powers activated by special statues, in order to succeed. And while all four are needed to proceed at certain points (either switching between them as one player or having multiple heroes at once with up to four players), they each play differently, with a nice range of combat and platforming styles that will make you want to check each one out. Whoever you choose, though, combat is fluid, quick and fun. And through their attacks, designs and actions, our main characters expertly display a large amount of personality, with a nice mix of ass-kicking and playful flavors. 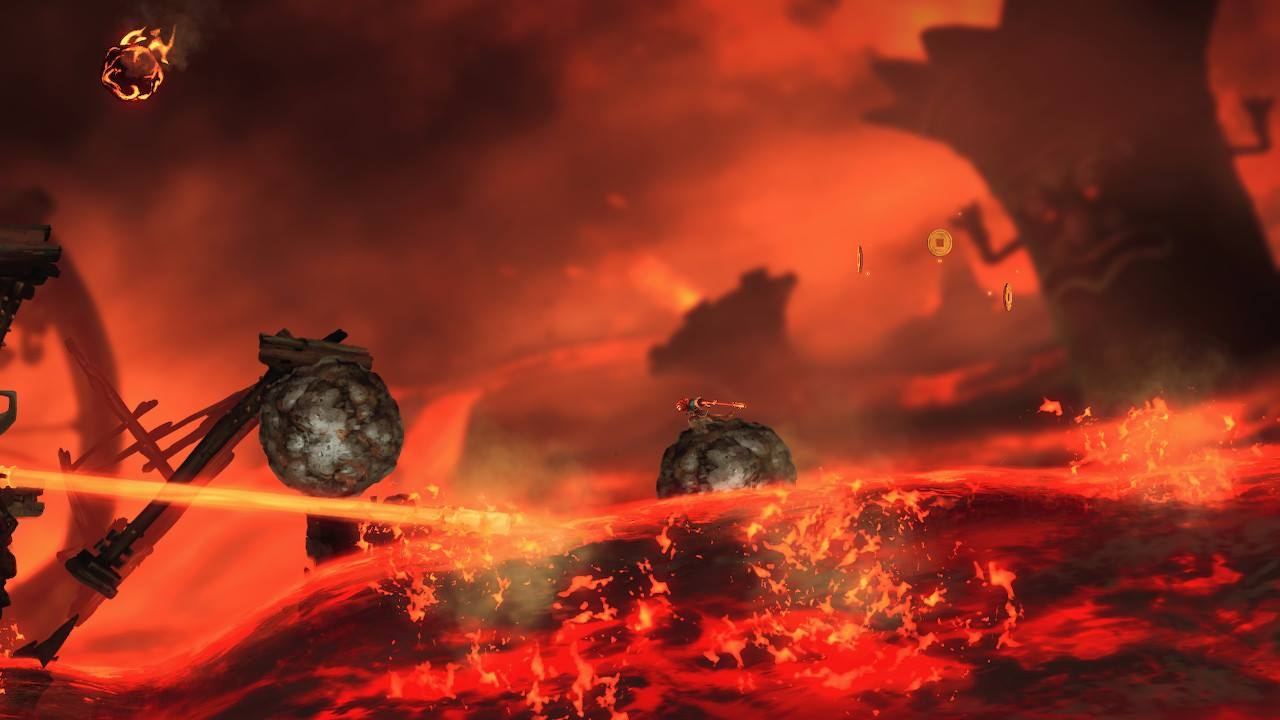 Actually, while Unruly Heroes adopts a more comical tone when approaching its source material, it’s more subtle than one would expect. There is the occasional quip via the dialogue, mainly from the princess, but the humor instead is mostly conveyed through style. The designs actually run the entire gamut from “Saturday morning cartoon” to “wouldn’t be out of place in a From Software RPG,” yet never does it feel like there’s a tonal clash or anything. Instead, the more colorful enemy designs and moments provide a contrast to the more serious, elaborate stuff. The end result just comes off as incredibly charming and highly pleasing, creating a perfect blend of rich, detailed scenery and classic bits of story with more light-hearted tones.

Speaking of style, it isn’t exactly a shocker to learn that one of the game’s biggest strength is its graphics. Unruly Heroes has the luck of having Rayman Legends veterans on its side and their hand-drawn magic clearly comes through here as well. The levels are breathtaking, full of heavy amounts of detail and lush designs all around, from ancient machinery to raging volcanoes and temples full of greenery. Not to mention the animation, especially on our leads, which is nice and full of motion and charm. And then there are the bosses, which fill up entire screens at times and look spectacular. It’s truly eye candy of the highest degree and will easily go down as one of this year’s most beautiful games. 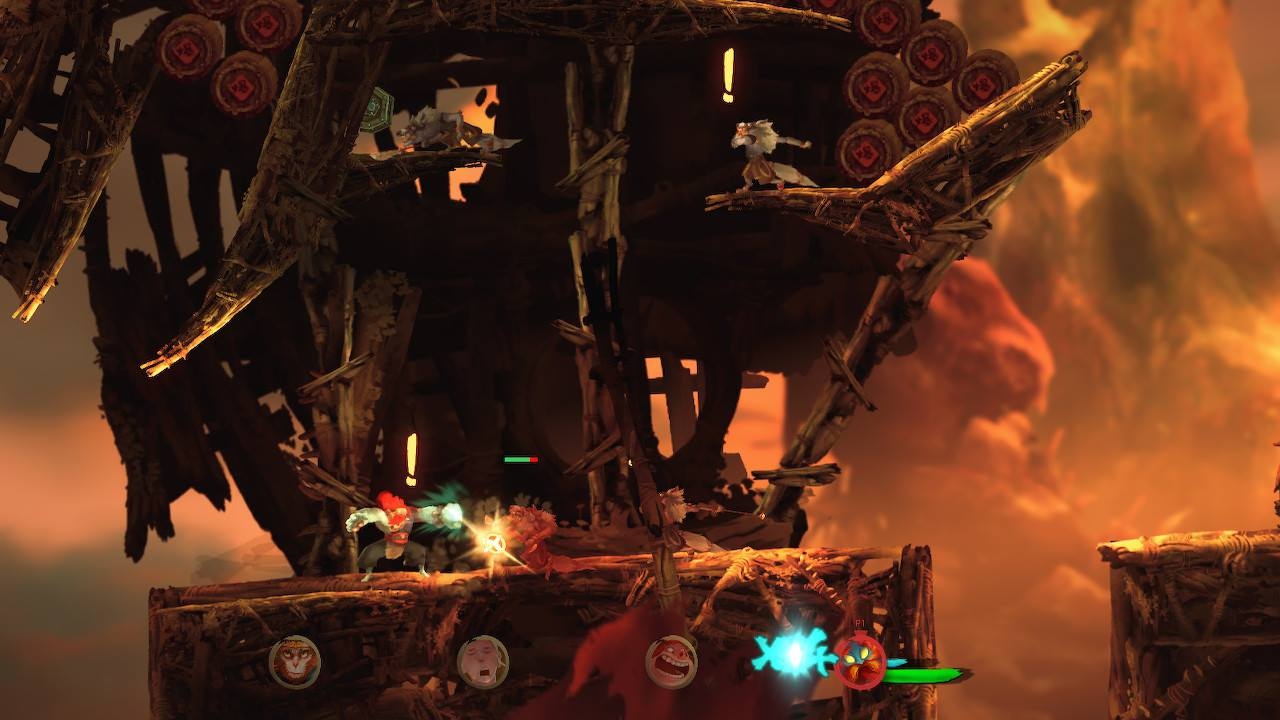 One stretch in particular that stands out in combining style and humor is the Underworld, the third set of the game’s levels. Providing a more stark contrast to the more serious portion of the original story, here the Underworld is imagined as an area where our heroes are reduced to a childlike state, with powers removed as well, and have to venture through the proper channels in order to reclaim their souls and return to the surface.

Aside from the ridiculously adorable chibi kid versions of the main characters (seriously, we had better be getting little plushies or figures of them in the future), the whole world is stylized as what I can only describe as a mix of a carnival fortune teller’s tent (and other parts of a carnival in general), a kid’s bedroom at nighttime with lit-up star designs on the ceiling and the DMV. It’s easily the most creative portion of the game, and between the jovial imagery, the blend of dark and bright colors, and the lost souls that act as enemies, it all hits the perfect tone to act as an effective comedic spark without diminishing anything else. 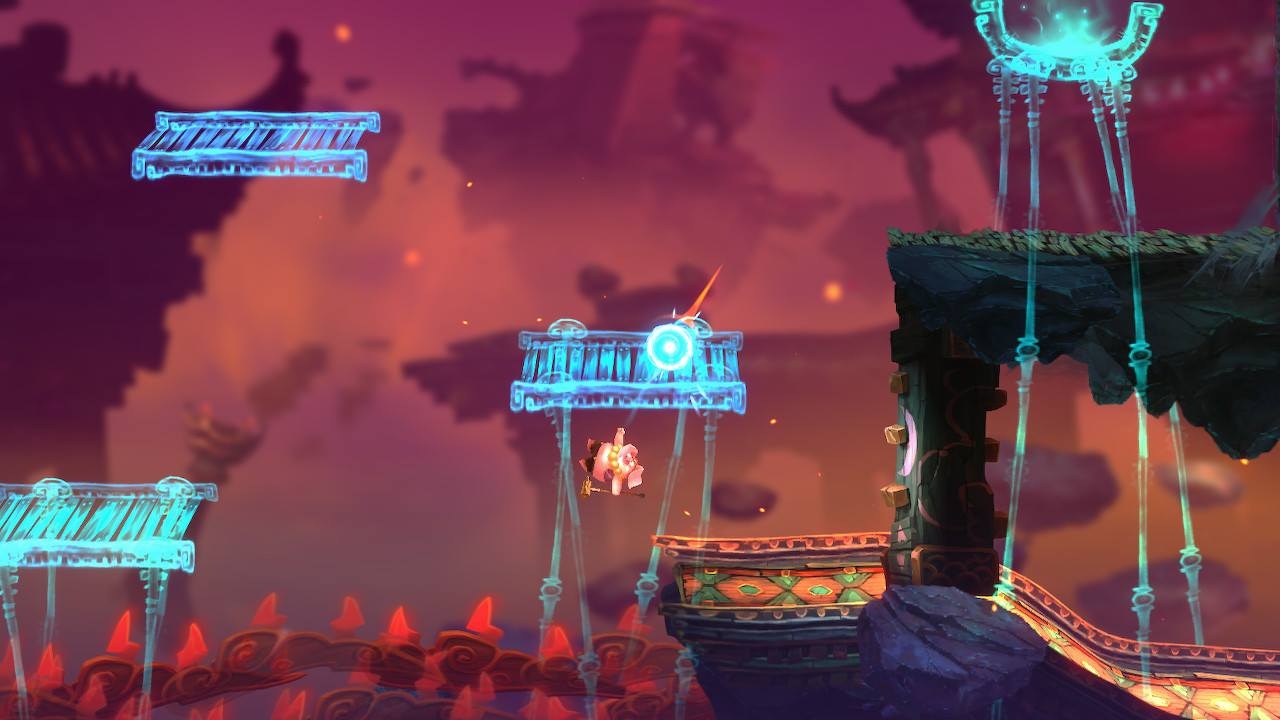 There’s another reason why the Underworld is highlighted here, though, and that’s to demonstrate just how well Unruly Heroes handles variety. The main gameplay consists of both standard platforming mixed it with beat-’em-up-esque combat. Light moves, heavy moves, dashes and dodges, special moves performed after filling a meter through successful hits, et cetera. Simple yet highly effective and fun stuff. For the underworld, though, as previously mentioned, our heroes get stripped of their powers (save for wall jumping). Instead, once they retrieve their soul after a gravity-defying platforming section, they use it as a rapid fire gun, adapting shooter mechanics. Then you have sections where souls can only latch onto certain platforms and die upon hitting others. Then while your character is hanging from your soul on these spiritual ledges, you have to catapult them over obstacles, Angry Birds-style. And then there’s a flying portion at the end as well.

When you write it out like that, it sounds like it should be a mess. In fact, there may actually be at least a little bit more to it as well. And yet, it isn’t a mess. It’s still quite a blast, in fact. This is likely due to the game taking the exact amount of time needed to tutorialize everything and get used to these new abilities. And it never even felt out of place. It was the same mix of action, puzzles and agility-based platforming a before, just taking a new form. It should feel almost like an entirely different game, and yet thanks to rock solid design, it makes up an entire set of levels without ever getting in the way. It’s honestly kind of amazing that they pulled this off. 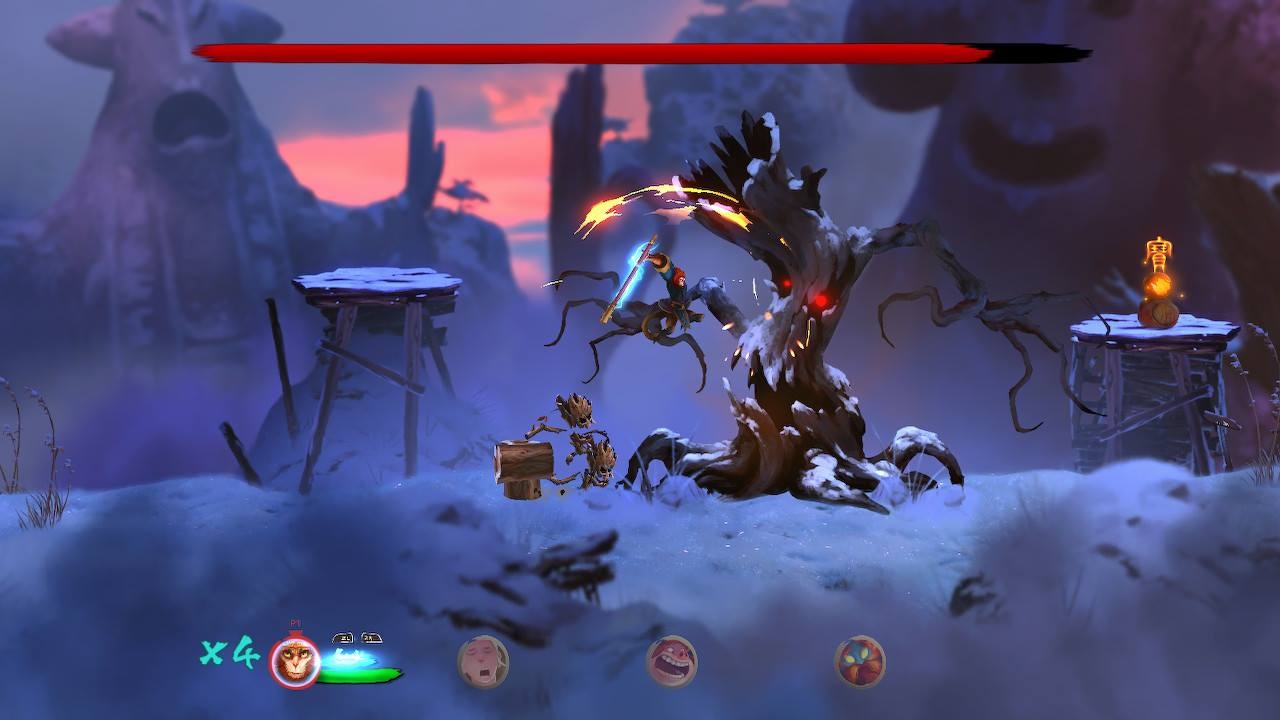 And this extends to other sections of the game as well. At certain points you get to possess enemies, in one case having to control one in the foreground and background at the same time in an amazing visual and clever section. You get a fan that allows you to cool down blocks at just the right time so that you can carve a path. You have to hit a series of lanterns along the way in order to advance in a way that keeps insect swarms away. You need a vacuum that sucks away darkness but also moves platforms around. And that’s still just a portion of the different gameplay twists that pop up. Unruly Heroes knows how to keep things nice and varied, be it with puzzles or combat, always finding new ways to deliver the goods and keep you on your toes.

In fact, I know this is going to sounds like an odd comparison, but in this sense, Unruly Heroes reminded me of What Remains of Edith Finch. No, seriously. One of that game’s biggest strengths was despite every story within it adopting a different style of gameplay (first-person horror, top-down fantasy, camera puzzles and such), every one of them lasted for exactly as long as they needed it to. No part stretched out for too long, yet no moment left me demanding more. It juggled multiple genres, had the perfect length for each one and lasted for the exact amount of time needed in order to hit the exact sweet spot where enjoyability was at a maximum.

And that sums up Unruly Heroes as well, in my opinion. It juggles all of these level ideas and bits of gameplay without ever fumbling, never feeling dull and always providing a great platforming or action-packed experience from the core gameplay to every aspect surrounding it. It was actually at least a good hour or two longer than I expected, with what felt like a perfect level of challenge (although how much of that length is indeed due to my skill is debatable). It helps that there’s a decent chunk of secrets to try and uncover, or medals for speedrunners to shoot for, creating a nice dose of replayability. 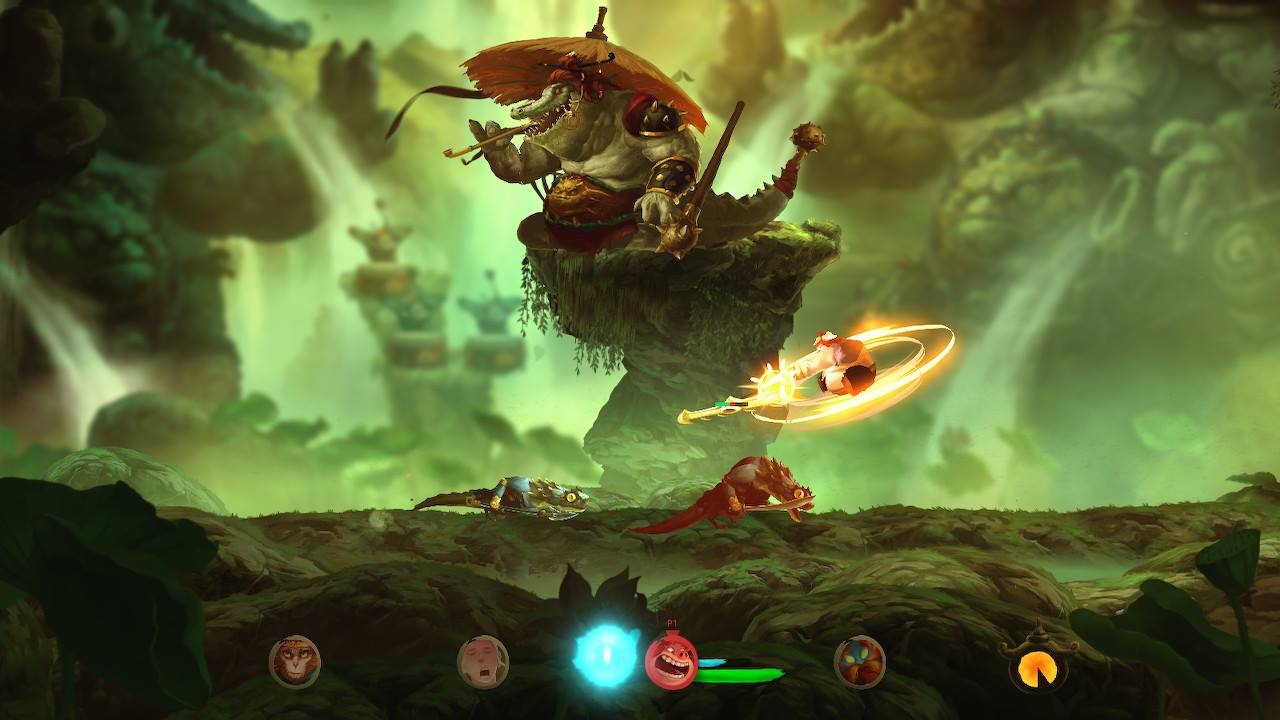 Unruly Heroes isn’t flawless, though. Well, it does have flaws, but each one is relatively minor compared to the highlights of the game. There is the occasional awkward control moment, sometimes a ledge you have trouble grabbing. The unlockable skins that come from collecting coins is a nice touch, but they’re mainly just recolors. Speaking of extras, there’s no way to skip to the piece of your choice in the artwork unlocked via hidden scrolls, so you have to skip through everything before.

The bat enemies can be an occasional pain to reach at times, being some of the more annoying enemies. And speaking of reach, sometimes a fallen colleague’s soul takes a long time to float near to you in order to hit it and revive them, which is a bit troubling during boss battles where they can be destroyed for the battle’s duration with one attack. And speaking of which, compared to the other bosses that put up more of a fair fight, the final boss can be ridiculously cheap. Expect at least one combo of attacks leading to a one-hit kill from them.

The only real notable flaw in Unruly Heroes is that it’s clearly meant with multiplayer for the main gameplay. Not that the game isn’t playable in single player. I mean, after all, literally every compliment that came before this suggests a great single-player game. But it really feels like it would be an even better multiplayer game. The chaotic tandem combat, the scrambles to revive fallen friends, the fighting game versus mode, even the rankings after each stage that show which character accomplished the most…it all suggests a game that really needs to be played with friends. Of course, while it’s great to have both co-op and solo options, we also highly recommend it even without friends, so you’re good either way. 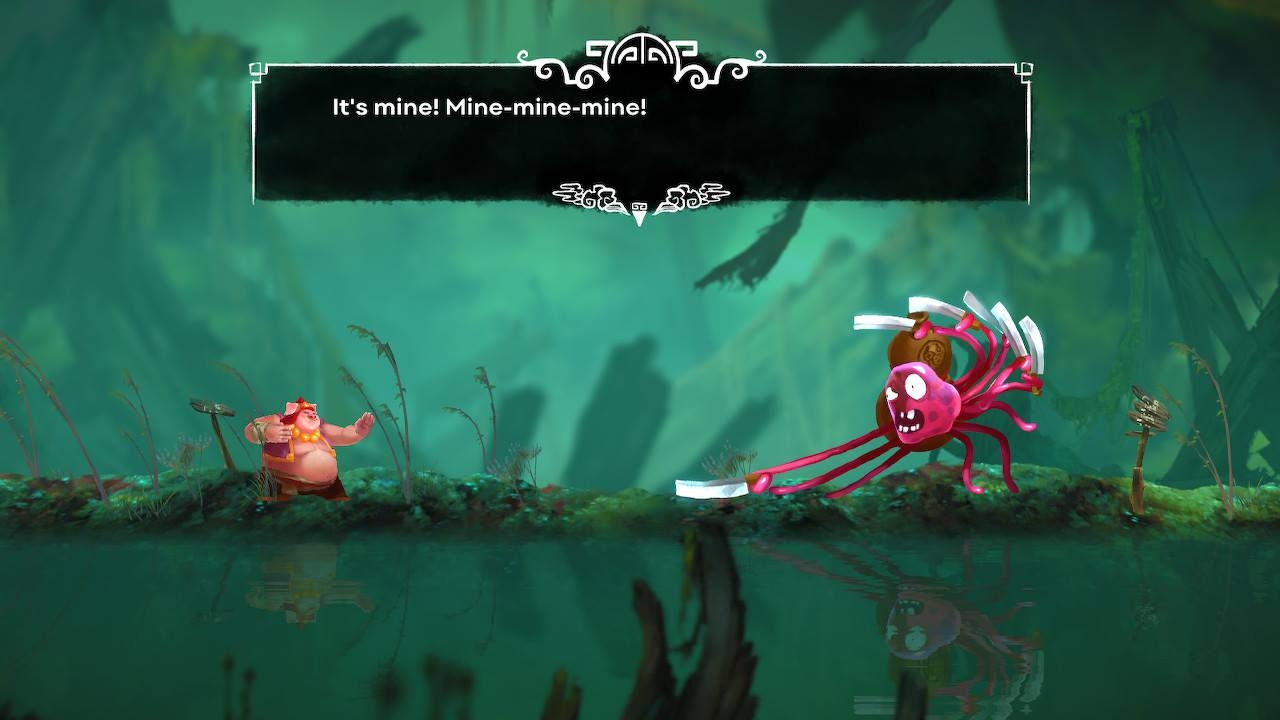 Unruly Heroes is a superb action game destined to go down as one of this year’s sleeper hits. Mind you, in a just world, it would be more than a sleeper. But high profile or not, this is still one expertly-crafted burst of action that surprisingly comes in many flavors. Between the absolutely gorgeous artwork, fun combat and platforming, varied gameplay, and an immense amount of charm that creates an amazing take on a classic legend, this is a title you shouldn’t miss. It truly is a case where our misfit heroes smashed their way to the top and did it with style.