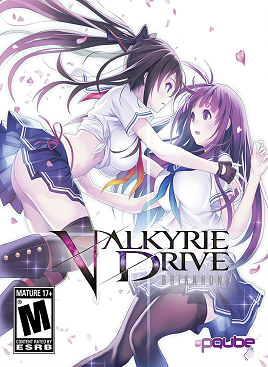 Marvelous, Meteorise and PQube’s Valkyrie Drive- Bhikkhuni is an action title that wears its cheesecake on its sleeve. Jubblies bounce, clothes tear and fly off, and sexual tension between the heroines abound. Considering that their own trailer promotes this title as “Lewder” than its Senran Kagura series predecessors, it’s apparent where their marketing department feels the audience is at. The funny thing is that, underneath the pile of barely concealed nipples, the company has shown a continuously maturing sense of how to create a worthwhile action/battle system. Valkyrie Drive is the current pinnacle of this trend, yielding a highly energetic beat ’em up system that is complex yet easy to use.

The game starts off feeling like a visual novel, with long periods of exposition detailing the story set up. There’s a virus going around that infects young women. Known as the “V-Virus”, it has been proving incredibly hard to cure. To combat the spread, the infected ladies,  referred to as “Valkyries”, are quarantined on various islands to continue schooling and, hopefully, live a healthy life. No one has managed to find a successful cure, with the exception of the Bhikkhuni School. There, they have discovered that forcing the women to battle robots and each other trains them up to have the strength to keep the rather violent disease under control. It goes further: the protagonists of this tale have a more specialized form of the ailment, known as the “VR-virus.” These ladies not only have the violent, difficult to control power granted by the regular V-virus, they have the ability to transform into weapons to be wielded by other VR infected patients. This point was amply confusing to this reviewer, as I thought that the commonly feared VR-virus was known as “pinkeye.” Still, this serves as a good plot reason to build an action game around enhancing character relationships, as pairs that like each other perform better in battle. So much the better if they start making out.

Much like the Senran Kagura titles, this game excels at throwing tons of enemies on screen for players to stylistically dispatch. All the hallmarks of its forebear is present, from air juggles, distance closing dashes, and insanely high combos. There are added wrinkles here, like revenge recoveries and damage boosting phantom combos, to add further layers onto the existing system. It’s all very smart laid out and simple to use. Simpiler than even the developers realized, apparently, as this title starts out with an extremely long set of tutorial stages. Counting story and exploring unlocked stores and gallery options, the opening bits can take between an hour to an hour and a half before the game actually gets going. For an action game like this, that’s simply too long. 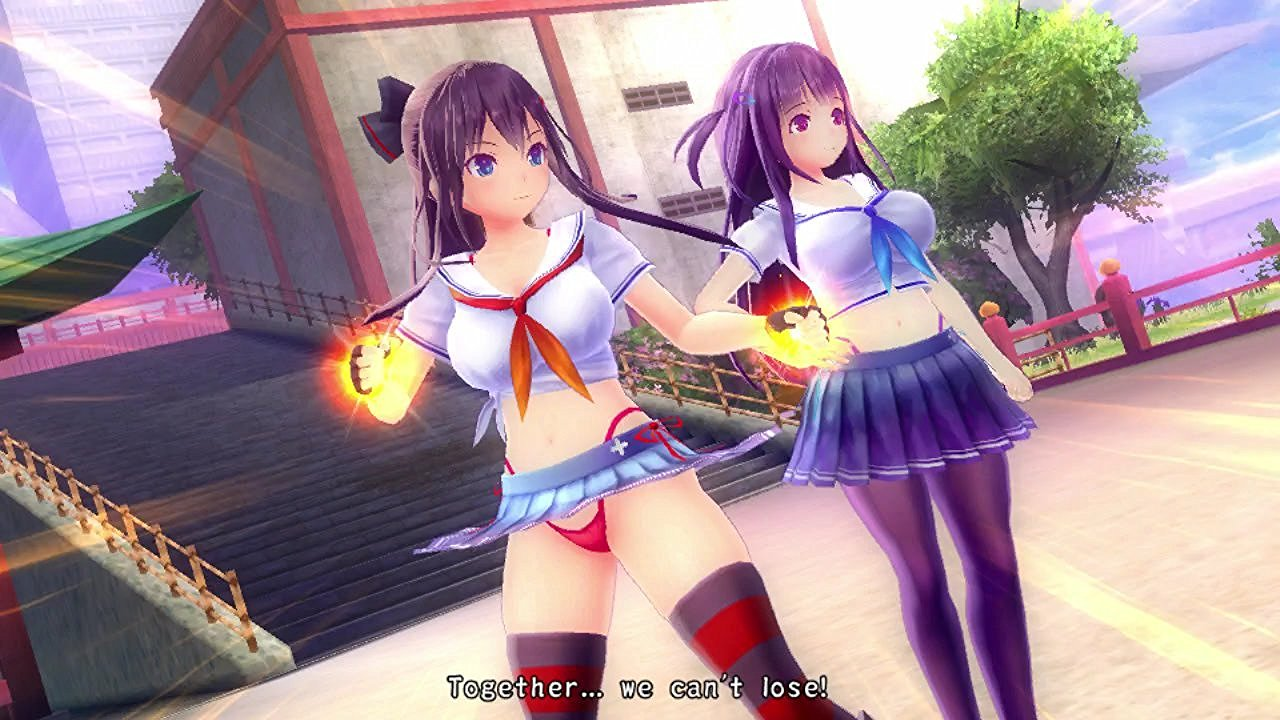 It wouldn’t have felt as long were it not for some redundant dialogue. While it would be foolish to describe previous Senran titles as “smart,” even the longer visual segments kept the pacing up, focusing on set up/pay off structure over repeating plot points ad nauseum. Admittedly, the writing gets much better as the game goes along, but, man, that opening is a slog.

Once it passes this point, though, the fighting becomes a perfectly tuned machine. Valkyrie Drive captures what makes these games so addictive well after the appeal of the fan service wears off. Knocking a support class enemy into the air, chasing after it with a timed button press, defeating her ten feet above the ground, and flying towards the next serves is a basic moment out of a normal stage. Drives, attack cancels, and perfectly timed dodges reward players for paying attention and using every option available. Ever increasing the damage multiplier to clear the hordes of enemies faster and faster managed to become an addiction point, as I would find myself studying the mix of enemies the game decided to throw at me and mentally plot the best path of destruction. Considering the various characters present, each with their own weapons and feel of play, there is plenty of reason to revisit the stages, just to see if it can be finished with a better time. 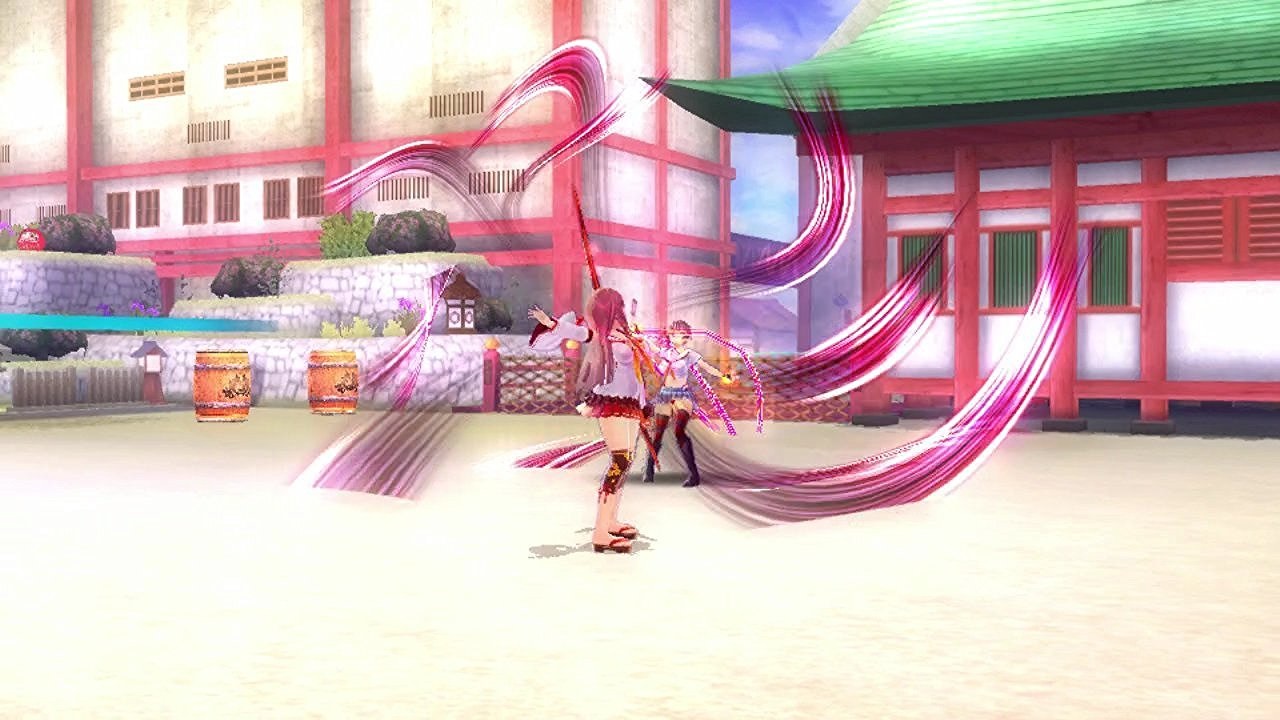 Of course, we haven’t yet really discussed the DD sporting elephant in the room, the fan service. People who have watched the trailer or have played a Senran Kagura title will have a good idea regarding what to expect. Regarding the “lewder” sentiment that is advertised, one could say that this game is less shy about giving players a good look at unclothed anime butts. Nipples and, well, you know, are still a no go. Sorry.

What does seem different here when compared to the Senran titles is the tone of the luridness. All the characters in Senran felt like they were in on the joke, and that aspect was one of the components of their badassitude. Despite protestations to the contrary, each of the heroines there felt like they were honestly enjoying the horseplay. Valkyrie Drive feels different, at least starting off. Characters will introduce themselves with ninja gropes that aren’t taken in good humor. Players will need to upgrade one part of the heroine’s rank by poking them repeatedly in the dressing room (not a euphemism, thank goodness). The protestations during the latter is especially disturbing starting out, as the ladies making it clear that these attentions are unwanted. This is all despite the fact that the game never presents itself as anything to be taken seriously. 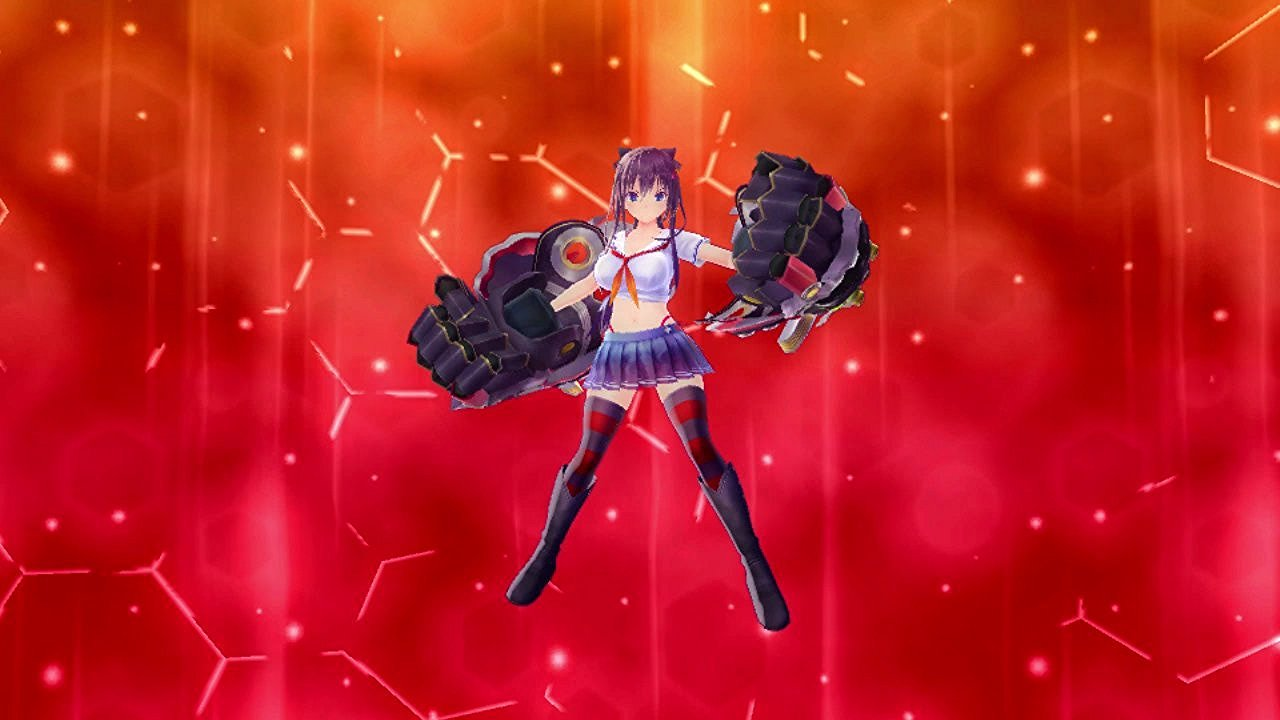 As the characters are fleshed (har har) out during the game’s long story, this becomes less of an issue, and the same aspects, with the same animations, begin to feel less skeezy and becomes more in line with the playful attitude that was intended. The same goes with finding the Chest Guards throughout the levels. These robots feel up the currently played character to determine their (sigh) “Rack Rank.” If said rank is high enough, players can loot a special area for items. Gross at first, but less so as the players learn more about the girls. Truthfully, it is with great hesitation that the entire tone of the fan service is even brought up. However, it seemed proper to mention it only to point out to those that might feel put off that it does get better. In fact, should a sequel be produced, it will almost certainly sidestep this potential concern as the ladies are already introduced and have been shown to be “on board.”

One thing that rears its head throughout the experience are crashes. I came across quite a few during my play time at seemingly random moments. The technical aspects is truly what is holding this title back from greatness. Never knowing whether the next load screen will result in being kicked back to the Vita dashboard was extremely frustrating, and is something that is in desperate need of patching, posthaste. At least there is a generous autosave system, so there is never too much progress lost. With the noticeably long load times, though, these issues teeter close to becoming a complete showstopper. 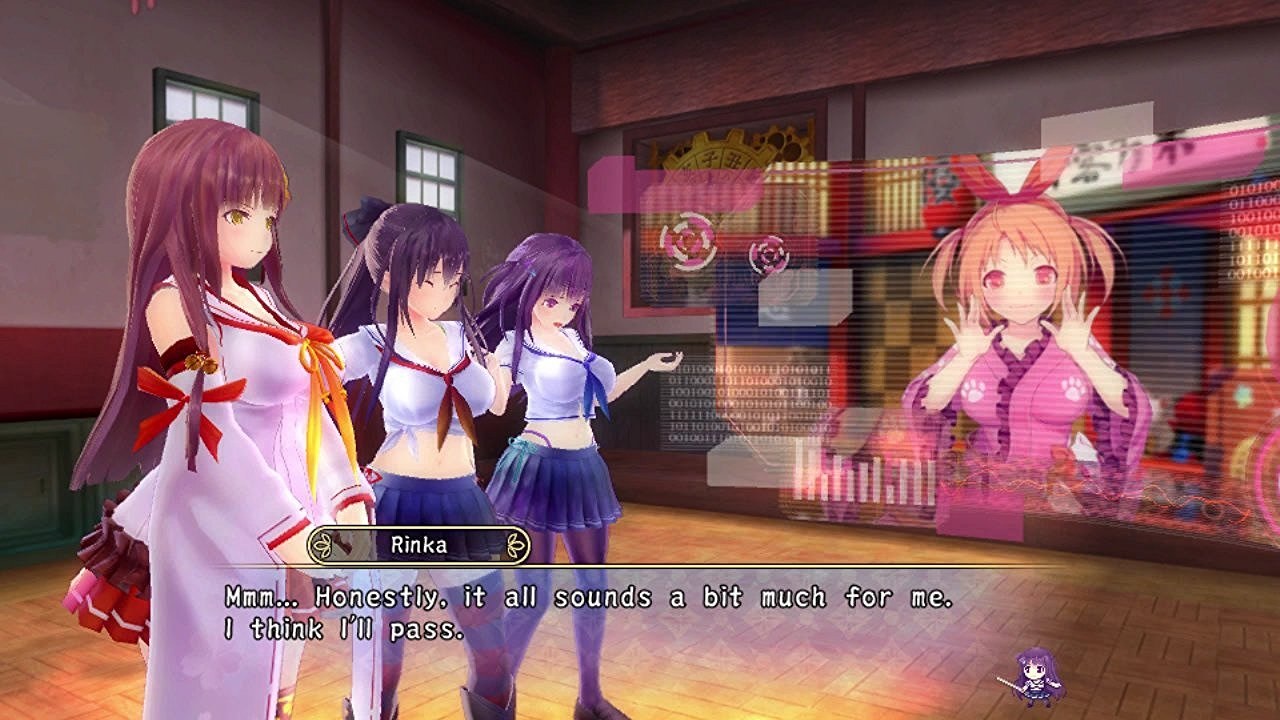 Valkyrie Drive- Bhikkhuni is a one of those titles that takes awhile to get going, something that many folks will not be able to tolerate. From an overlong tutorial to the failure to properly contextualize the fan service before wetly dropping it on the player, it’s almost like it defies its audience to enjoy it anywhere but alone, in the dark at the start. Those who give it time, to set itself up, though, will find themselves enamored with the plot and silliness that goes along with the top-notch fighting. The pacing issues aside, the only thing holding this title back is the technical issues. A glitch here and there is understandable, but averaging a full crash an hour isn’t something to be taken lightly. When it works, it really works. Until a patch becomes available, though, it is advised that a purchase be very carefully considered.