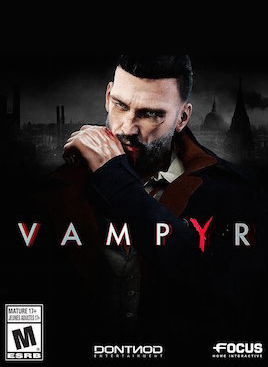 We’re severely lacking in good vampiric fiction. While most media has often taken to this sub-genre with a bit more of a vacuous, trope-ridden romanticizing of one of the more well-known creatures from mythic folklore, there has been the occasional engaging outing. Needless to say, Vampyr — Dontnod’s latest choice-driven, part-adventure, part-Action RPG outing in early 20th century London — could very well spell the end of the quality drought. More than thirty hours after seeing main protagonist Dr. Jonathan Reid wake to find himself one of the newly-anointed members of the undead (or Ekon as they are referred to in-game, one of three classes of Vampire) and needless to say, Dontnod’s less-narcissistic approach to the matter has been well worth the wait.

Vampyr is an odd mix of a game when looking at it on its individual components, but that’s not inherently a bad thing. In fact it’s this odd juxtapose — of Dontnod’s established traits that have so clearly been carried through from Life is Strange and its borrowed ideas in the Action RPG front — that harbors plenty of interesting, segmented moments along the way that while don’t exactly formulate into some ground-breaking “greater than the sum of their parts” whole, do keep the tale being told and the mechanics with which the players are required to master from feeling tired. Given how conflicted these two play-styles are, an adventure one second and an RPG the next, one of the biggest compliments you can give the developer is how its adventure-like, investigative conversing with NPCs and its combat out in the baron city streets compliment one another without ever feeling more prominent than the other.

The latter of which, in a time some may define as the “post-Souls” era, may well be one of the better implemented examples of that one-on-one style of combat. One that, like Bloodborne, prioritizes aggression and speed, but still offers moment of strategy along the way. Deciding whether to focus entirely on inflicting damage or slowly chip away at an enemy’s Guard meter; making smart use of one’s stamina; knowing best when to use/recover blood in order to activate special passive/offensive/defensive skills you unlock throughout your ventures. There’s a surprising amount of variables to consider in and out of battle — particularly when preparing one’s self for the inevitable boss fights along the way — but never does it feel overbearing or complex for the pure sake of it with the many options on display, but a button tap away. Despite the elaborate settings (boss fights and all) and the many ways you can build your character up, never does the RPG side of proceedings feel like they get in the way of the narrative’s more poignant story cues which in themselves make Vampyr a compelling tale to see unfold from start to finish. Rarely does a game’s tale end with the sense that what one has witnessed, on story alone, feels truly complete. I wouldn’t blame Dontnod if we never see a sequel — the story ends on such a perfect note. 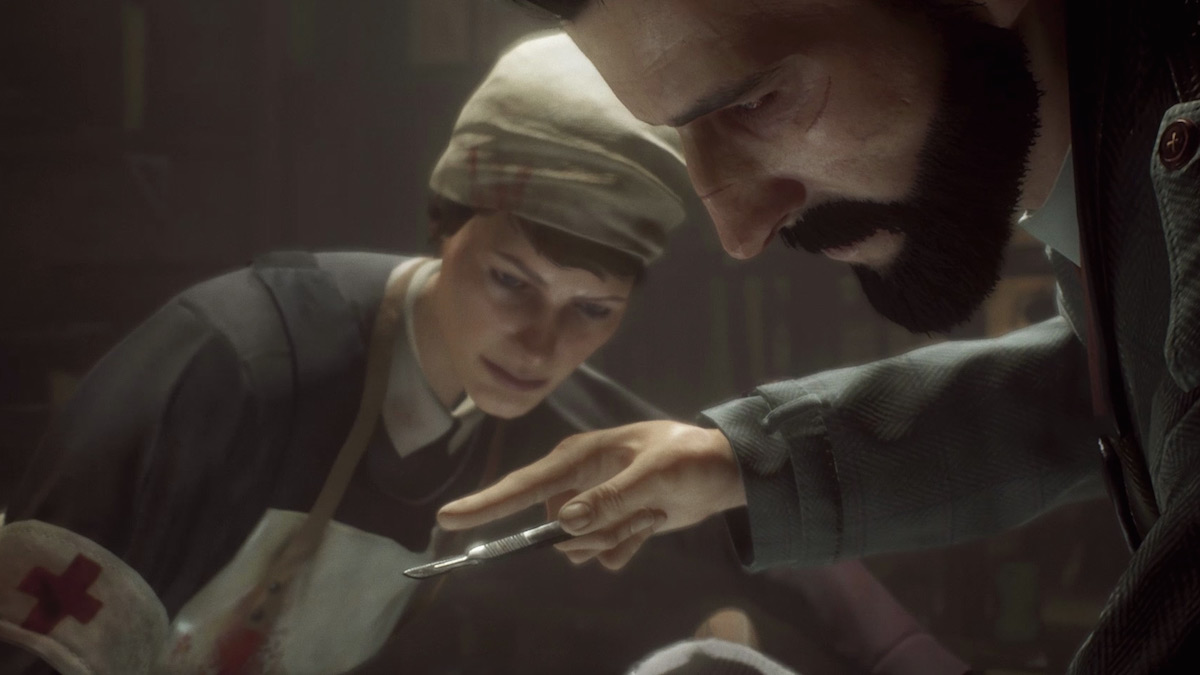 Which of course is where most of the investigative work comes in — the other side to Vampyr’s gameplay. Conversing with NPCs so as to get a better understanding of their background, history and relationship with other NPCs in the city. Doing so unlocks additional dialog options which in turn open up more potential avenues of conversation, even unlocking a side-quest here and there. Vampyr requires patience and plenty of it — some conversations and moments of dialog with an NPC lasting several minutes at a time — but for those willing to take things a touch slower the pay-off is potentially massive. Especially if you’re the type attempting a more pacifist run, trying one’s best to ignore the ample figurative carrots dangling front-and-center via a character’s blood and the (at most) many thousands of XP you can accumulate at a given moment.

The act of leveling up isn’t so much a do-or-die on whether you kill or not, rather it’s best to see this more as a fast-track approach with many of the game’s alternatives more than capable of providing XP (albeit a little at a time) you may want, even need, for that next health boost or increased power or even a fight you just can’t seem to win. Regardless, the temptation seldom wanes; for a game centering primarily on vampires and the pull to drain someone of their blood, it’s a clever integration of the overarching theme into one of the pivotal mechanics. While completing side-quests, filling in dialog wheels and even curing NPCs of their temporal illnesses will get you there eventually, there’s always that temptation to end a life that hangs over wherever you go. Particularly when you eavesdrop (dynamically so, another great, organic approach the game takes as to your stumbling upon new events that unfold in the world) on an NPC whereupon their questionable actions and motivations make the morally grey dilemma afoot even muddier. 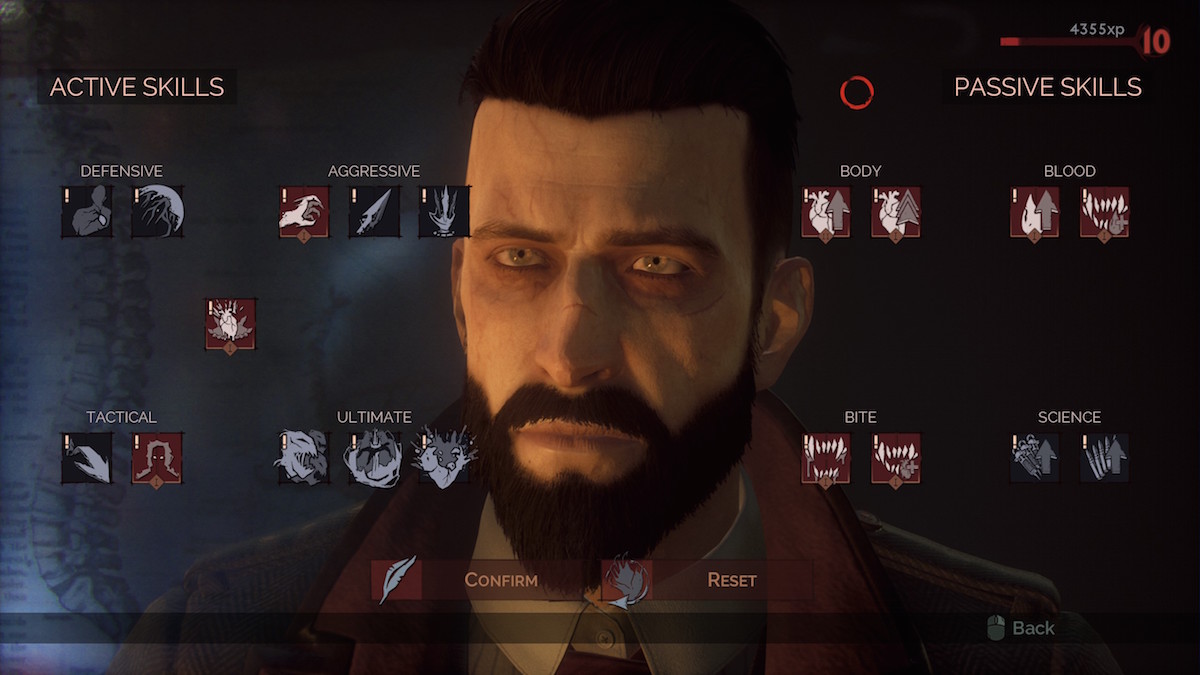 Rarely is there a situation where the game doesn’t remind you that the actions you undertake will have significant ramifications. While the results do vary — ranging from unnoticeable to outright disastrous for a given district — the ominous tone, use of lighting and above all else, the soundtrack almost always gives each and every one of your crucial decisions grueling weight. Particularly when conversing with key NPCs in a given district, the presentation of these moments is delivered in a way that almost always feels like so much is riding on them. Amplified more so when you inevitably return to these districts later on to find your actions either having paid off or end horribly. In some cases, once friendly NPCs turning hostile, even monstrous, should that particular district fall into chaos — the health of its populace also affecting how close that region is to being lost which shifts and changes whenever one levels up. Again, another smart risk:reward benefactor players must always consider.

It can at points feel like an unnecessary diversion, having to keep each citizen in top health, but the consequences — usually an increased presence in enemies, but can also lead to the permanent loss of potentially-useful side-quests and opportunity to gain XP — once again keep it from feeling unwelcome or out of place. But part of the reason why Vampyr’s tone, its dread-laden atmosphere — despite the similarities of its districts and the often repeated Gothic aesthetic of the environment — works, lies in composer Olivier Deriviere’s fantastic rendition of a silent city on the brink of collapse. It’s in Deriviere’s subtle, worming, at times suggestive use of strings, woodwind and even industrial-esque electronic percussion and synthesizers, that adds so much peril and sonic color to London’s often blackened, vacant streets. While it may not be bold or substantial in its melodic output, the dark, experimental ambiance and softening rendition of even some character themes — in tandem with the overall sound design — give the game world an even more anxious and uncertain edge. 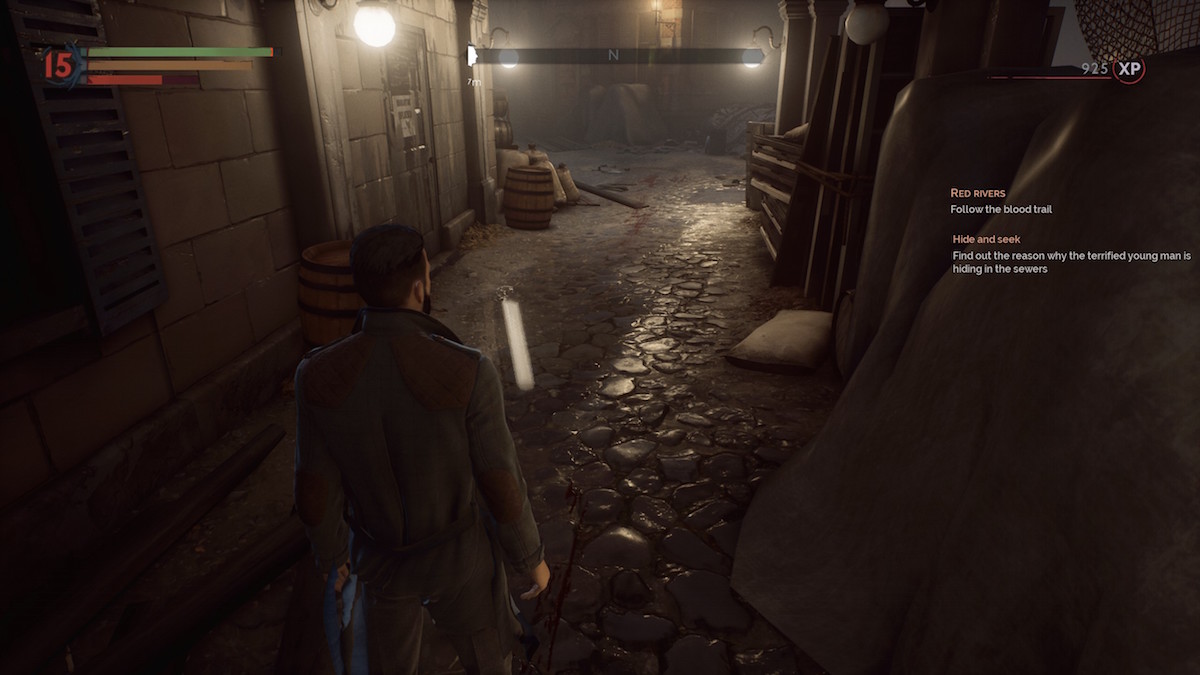 Even without its impressive use of sound, Vampyr is still a modestly good and surprisingly optimized release. Playing on PC, the game runs rather well even when pushing all settings to max. On a [somewhat] dated card such as a GTX 980, Vampyr still manages to dish out higher than a 60FPS frame-rate, beyond even the standard 1080p resolution. Granted, some cutscenes here and there can see the frame-rate drop to around 40-45 frames for a time, but for the most part — from the way light reflects off cobblestones, to the use of fog — Dontnod’s technical implementation of its visual assets only ups the intensity its environments so clearly want to project.

Not all of the developer’s aesthetic choices and technical execution pay off, however, and it’s here sadly where the game does falter for a time. For anyone who’s played Life is Strange (and is well honed with its visual aesthetic especially), you’ll immediately recognize the bold, expressionist-like art-style of some textures and models that make up a portion of the environment. While some building textures for example can be passed off, sadly other moments can feel jarring — semi-realistic rendered textures lying next to low poly-esque objects for example. But the criticisms in the presentation extend beyond its visual choices with NPCs, when in conversation, confined to the same half-dozen rotary moments that at points give them an unflattering animatronic look. More so, the objective quality of facial animations and character models can dip dramatically at points — sticking out far more than the previously-mentioned clash of visual styles. 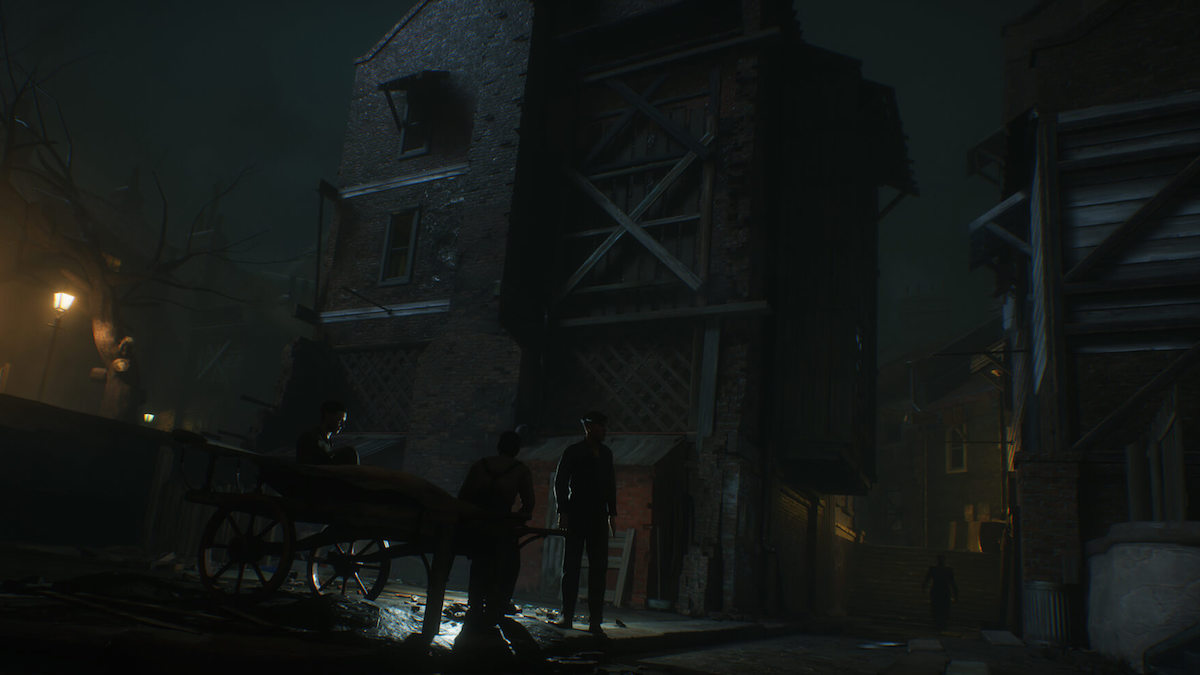 Beyond this, Vampyr can throw up an odd hiccup here and there when exploring the streets, ranging from distant pop-in to hostile enemies giving a sliding T-pose once or twice. And while not as unsavory to the whole experience as it might seem in the moment, some boss fights — of which there are only around five or six mandatory, story-based encounters — can come across as more focused on the large amount of health one has to chip away at, rather than the potential menace and tactics said boss can engage you with. Some fights can be worked out and conquered in as little as three, maybe even two attempts however one boss in particular delivers quite the spike in difficulty and is perhaps the biggest culprit of some ridiculous hitbox detection in a game that can have common enemies hit you despite the impression of having avoided their attack by a fair few inches.

Even so, Vampyr remains a game whose more subtle charms lay in its smaller details and appreciative quality-of-life inclusions. From the way quest-based dialog is highlighted, to the way NPCs have their own little title card with one’s name, health, XP count when navigating the world; the fact you can confirm or otherwise reset your chosen upgrades when leveling up should you change your mind or realize you’ve made a mistake; even the way human enemies cry “NO!” when one of their comrades dies at your hand. It’s these minute and brief moments that only add to, even elevate, the realism of its world but most importantly offer some convenience and ease of use with so many systems at play. 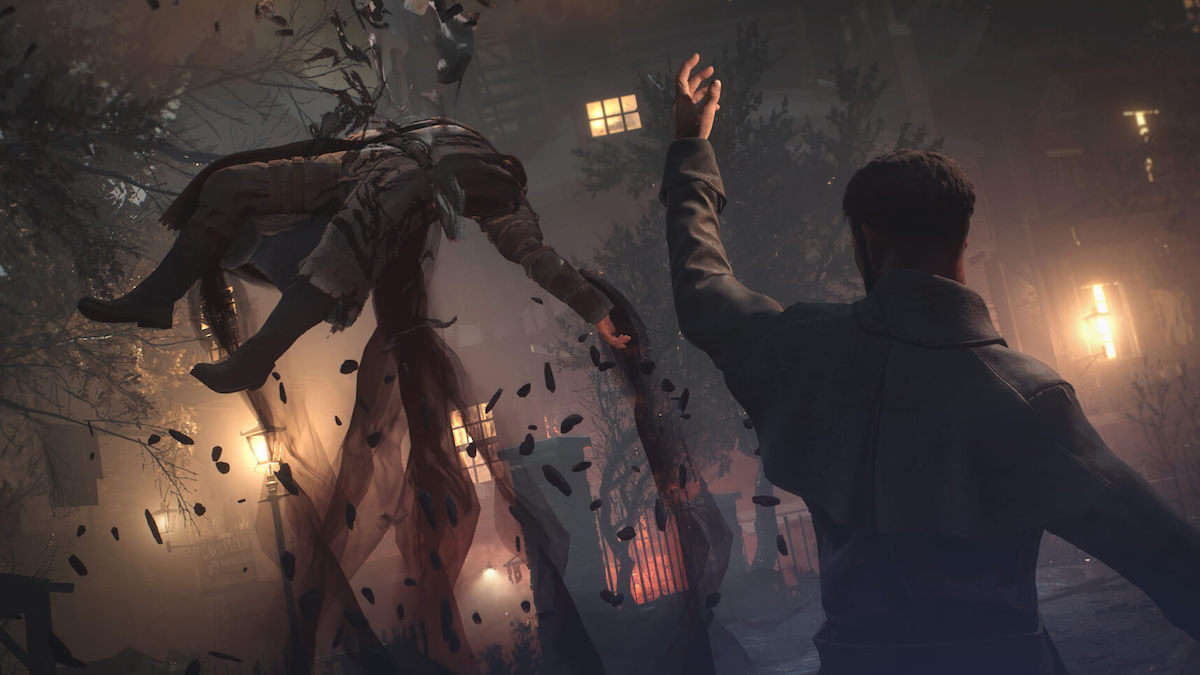 It takes some doing to find a middle-ground between two such conflicting genres, but Dontnod have done a terrific job marrying Adventure and Action RPG elements into a pleasant and modestly cohesive whole. Though some technical blemishes and unconvincing choices in the artistic/aesthetic department do stop the game from achieving excellence, Vampyr‘s vast assortment of stand-alone moments and finer details alike end up making this harrowing journey through an epidemic-plagued London more than a satisfying experience. Vampyr is, in the end, a cleverly orchestrated series of tense uncertainties and genuinely difficult choices, sprinkled all the while by some pleasantly dynamic spots of world-building and opportunities to progress, regardless of play-style. But it’s the moral ambiguity of its choice-based actions that are most resonant — the joy, ironically, lying once again in seeing one’s decisions unfold. With a wide assortment of characters to consider and a brilliantly-integrated soundtrack to match, though some tasks can feel like unwanted busywork, for those patient and willing enough to invest the time and effort, Vampyr is undoubtedly another rewarding and impressive feat of gameplay and narrative fusion that Dontnod have treated us to.