The shoot’em up genre (or shmup) is just about as old video games themselves. As video games have evolved, the genre has fluctuated in popularity and recognition, but it has never gone away. With so many classic shmups available on pretty much every system capable of playing video games, new games typically need something unique to set them apart from all the others in the genre. Velocity, originally released on Playstation Network and now making its way to Steam under the title Velocity Ultra, is a very basic vertical scrolling space shooter with a handful of fairly original gameplay and design elements. 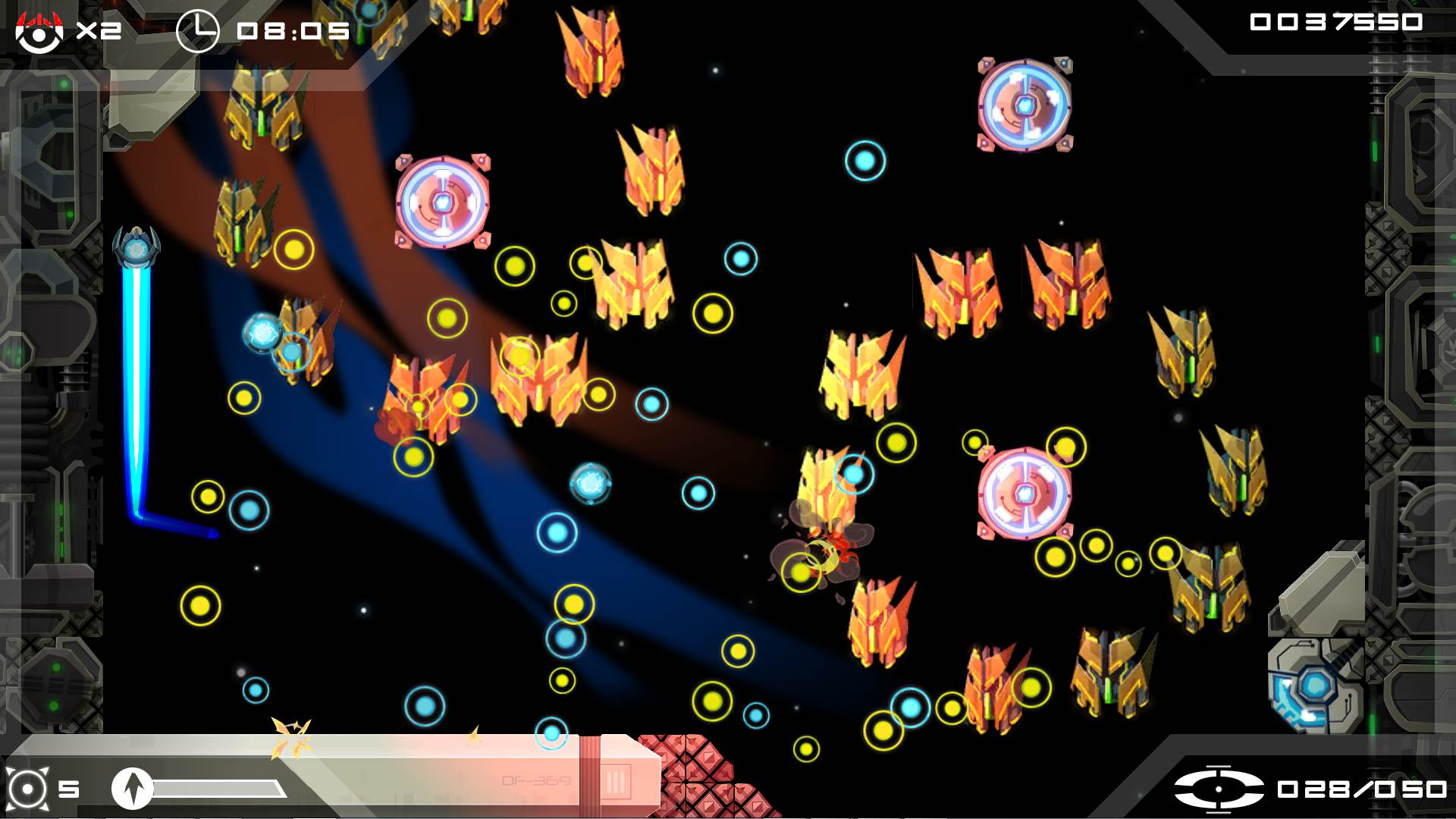 At first glance, Velocity Ultra looks exactly like about a million other games. You control a spaceship on a 2D plane that scrolls vertically and can fire straight forward. You are tasked with piloting around obstacles, collecting power-ups, and shooting enemies as you make your way through each of the 50 levels. You’ve likely played games that look almost exactly like this many times if you have any interest in the genre, but where things get interesting is when you are told you can do more than simply shoot enemies. The first ability you are given, on the very first level, is what the game calls a “scroll boost”. The majority of games like this involve the screen scrolling at a constant rate, but in Velocity you have the ability to control the speed at which the screen scrolls and your ship’s position on the screen independently of each other, and there are instances where this is required to complete levels.

Not long into the game you also gain the ability to teleport at will. Initially this is limited to moving around the screen, but later in the game you can teleport back to previously visited areas of the level. The level design and objectives are both very much built around you using these abilities, and each level has a different focus. Some levels don’t involve enemies at all, and instead present you with a very short time limit and mostly require you to traverse the stage as quickly as possible. These are the clear highlights of the game, as it promotes very quick thinking and skillful use of the unique abilities at your disposal, and are some of the few instances where the game is even remotely challenging. The other types of levels, unfortunately, don’t fare quite as well. 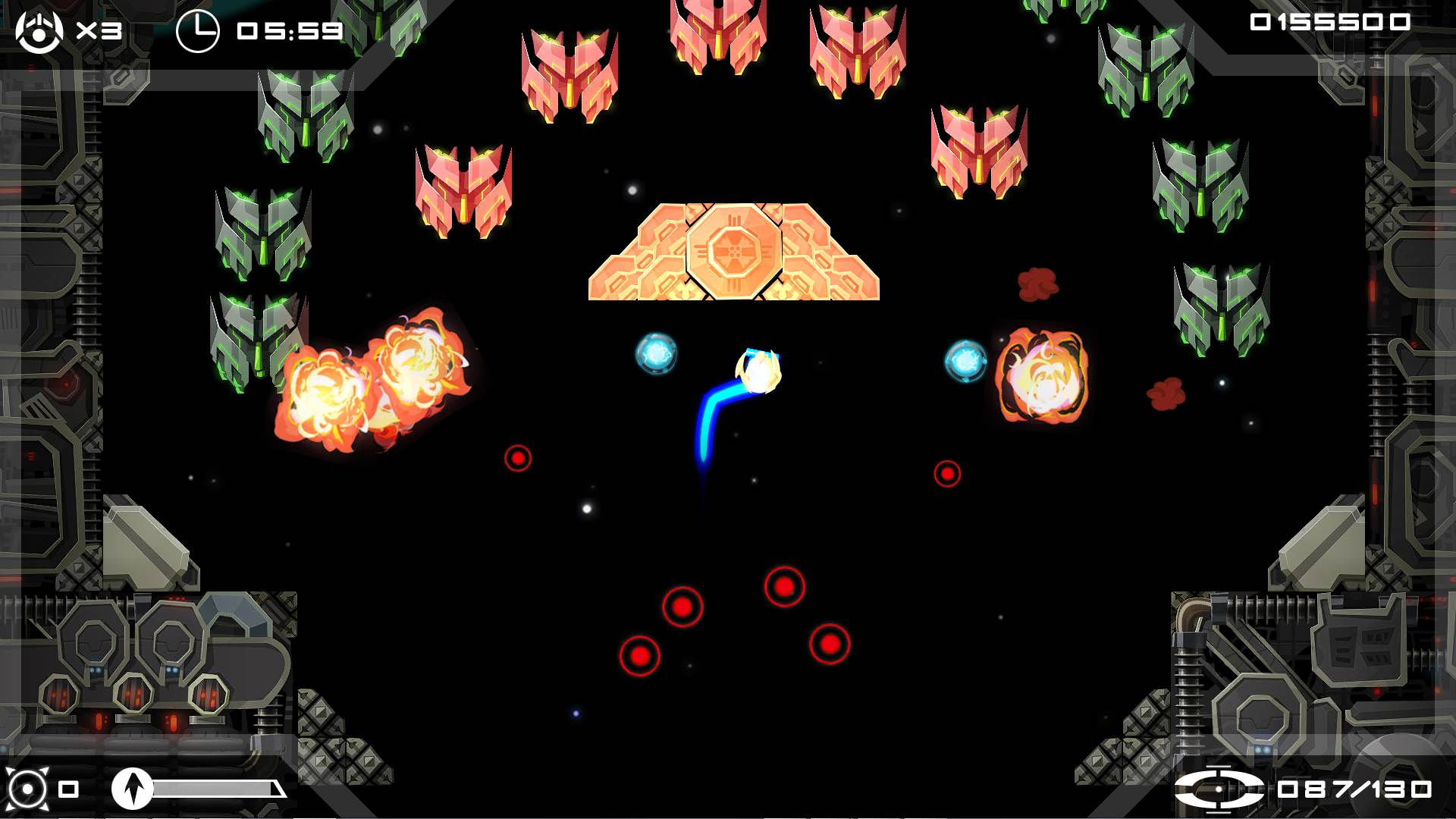 Another type of objective is found on levels that put the emphasis on collecting. In every level there are a set amount of what the game refers to as “escape pods”, but they are essentially coins. Some levels revolve around collecting a certain number of these coins, and the later instances involve lots of hitting switches, finding secret areas, and teleporting back to earlier parts of the stage. These take the longest of all the types of levels, which is a shame because they come off feeling like busy work. Nothing about these levels is at all difficult, there are usually very few or even no enemies and none of the tasks you have to perform get anywhere near being classified as “puzzles”, these stages are simply tedious and unrewarding.

The final variety of level are combat oriented stages, and once again these fall short due mostly to a lack of challenge. These levels make the least use of the unique traversal elements of the game, and that just exposes the fact that without those elements Velocity is an entirely generic space shooter, and a very easy one. The game never even approaches the realm of “bullet hell”, and in fact you don’t even encounter enemies that can both shoot and move until the last handful of levels. Every enemy is either stationary or moves in a clear pattern, and none take very long to defeat. You have a basic attack, which can be upgraded by collecting power-ups, which shoots straight ahead. You also have bombs, which you can fire in four directions, never run out of ammo, have ample area of effect damage, and can kill almost anything in a single hit. Needless to say, you’ll be using bombs almost all the time, and they make the combat easy to a distressingly boring degree.

While far too many of the stages can be classified as a bit on the boring side, you may be somewhat entertained by the decent music the game to offer. That is, of course, until you realize the game only features a handful of tracks and you’ll be hearing the same songs over and over throughout your four or so hour journey to the end of the game. Complementing the good but repetitive nature of the music are visuals that get the job done just fine, but don’t really stand out. 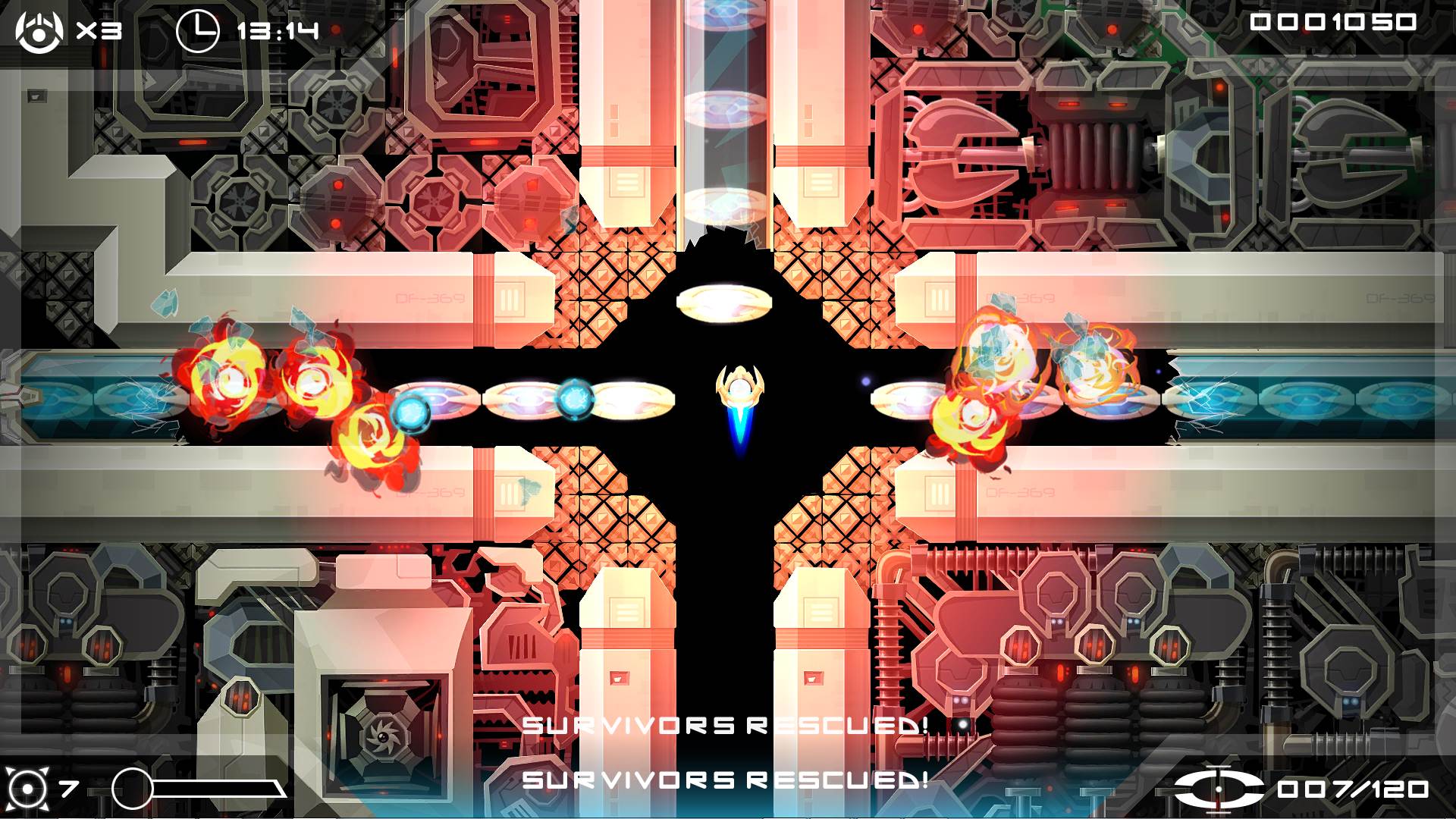 Velocity Ultra is a bog standard vertical scrolling space shooter that is saved from being entirely forgettable by some fairly interesting traversal abilities. The game smartly focuses on these abilities, rather than its by-the-numbers combat, but suffers due to a lack of challenge. The most challenging aspect of Velocity Ultra is a decent version of Minesweeper that is, for some reason, accessible in the main menu. Velocity Ultra is a perfectly functional game with some interesting mechanics, above average music, and serviceable visuals, but is unfortunately less than what it could be due to a general lack of challenge that makes the game more often than not feel like an exercise in tedium rather than a stimulating arcade experience.