One of the most common complaints about the headset birthed from HTC and Valve was focused around the headset strap itself. People found it cumbersome, stating that they felt that the original didn’t distribute the weight well enough to make for a comfortable experience. While I had my share of issues with Vive, this wasn’t one of them for me. There were numerous points of adjustment that can be made, so I never felt completely out of sorts. It was just part of the ritual. At least, that’s what I believed. It turns out that I was wrong. Woefully, horribly wrong. The new Vive Deluxe Audio Strap is such an improvement that it should probably become the standard for HTC’s headset going forward.

Off the bat, though, some time must be spent discussing switching out the old for the strap. It’s actually a simple process that receives a swift kick to the click-clacks by some poor documentation. The thing is, if people are purchasing this product, they need instructions on how to take the old strap off and open up the port so that the audio line can be switched. The included manual assumes that this is already done. Now, there is a page regarding how to reinstall the access cover, so reversing those instructions was simple enough. Not so much for removing the original strap’s buckles on either side of the set. I was set up at the kitchen table while putting this together, so the internet wasn’t convenient, but the manual insisted that I look it up online. So, removing the pile of cats, I tromped over, dug through HTC’s support website and finally found the answer: turn them clockwise and they will pop off. Imagine the money saved on ink by skipping this step in the manual! Why, they could almost afford to buy a Vive for office use when all is said and done! 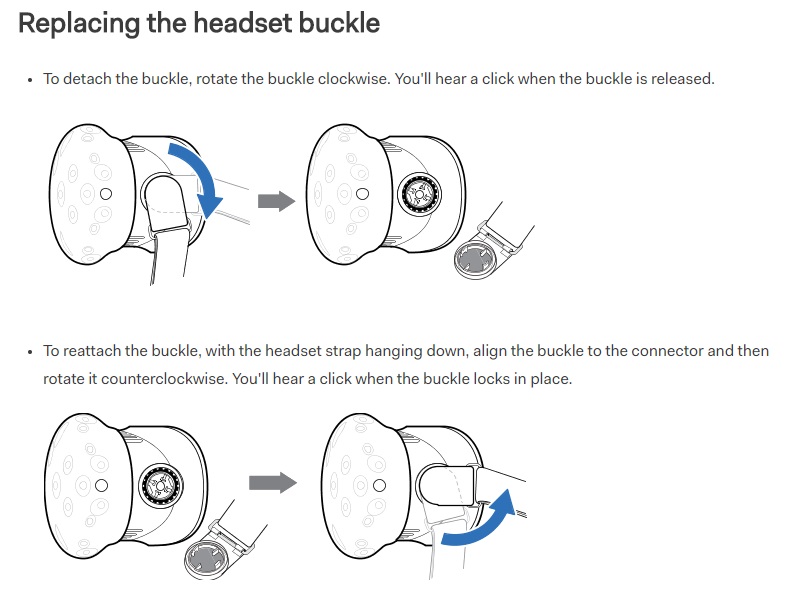 Stole this from the Vive website in case anyone else needs them.

Obviously, this is such a minor problem in the grand scheme of things, especially for an add-on to a hobbyist product that caters to the type of person who likes to mess with the guts of various pieces of technology. The thing is, many of us want clear instructions before operating on $800 pieces of equipment that we had no business being able to afford, but for the luck of the universe. The company is already well known for this type of thing, with various points of adjustment needing to be found online, and other ways to alleviate issues located on message boards. If HTC wrote a driver’s education manual, it would start with how to contact the insurance company after getting in an accident. Their sex ed textbook would just be recipes for placenta.

In the end, though, the short but frustrating process was well worth it. This new strap is designed first and foremost to be absolutely comfortable. When donning the set before, there was a noticeable weight on the nose and check bones. This, I assumed, was the price of VR. Because of how the new strap is cut, the weight is distributed evenly around the head. Previously, I would need to stop to adjust the thing after diving to the floor for cover or spinning rapidly. That is no longer an issue. Were it not for the fogging of the lenses, this new strap would make the Vive a destination for instructional exercise on its own. 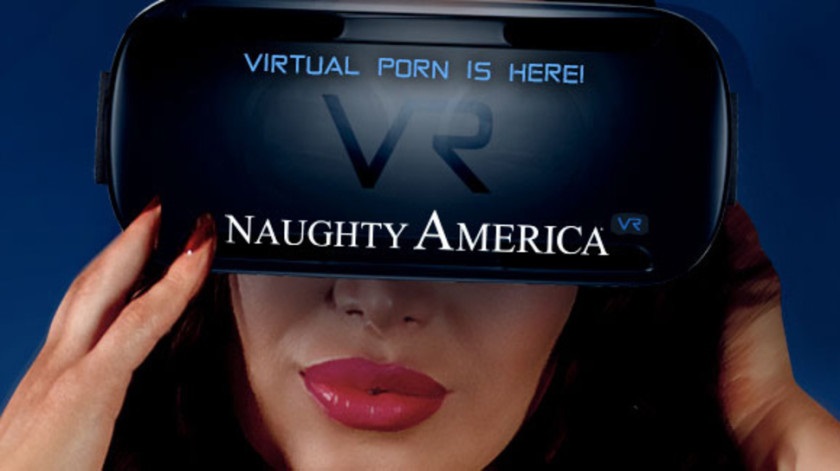 This comfort is coupled with a dramatically reduced time to put the thing on. With the old strap, it was a matter of putting it on, lenses first, then fiddling and resituating the set, finally locking the proper placement in with the tightening and loosening of the myriad straps all over the thing. It never bothered me as it was part of the ritual, but time was spent. Now, it’s a matter of putting it on and turning the dial at the back of the head, tightening it in place. There is still an adjustable Velcro strap at the top for smaller or freakishly large heads, but the need to mess with it is minimal at the very worst.

Considering that this product is called the Vive Deluxe Audio Strap, it seems pertinent to discuss the built in headphones. Preferring to use a pair of higher end, noise cancelling over the ear headphones, this was lower on my list of things that I cared about. Fortunately, the instructions for removing these are clear and understandable. These are instructions that I have not used, though. 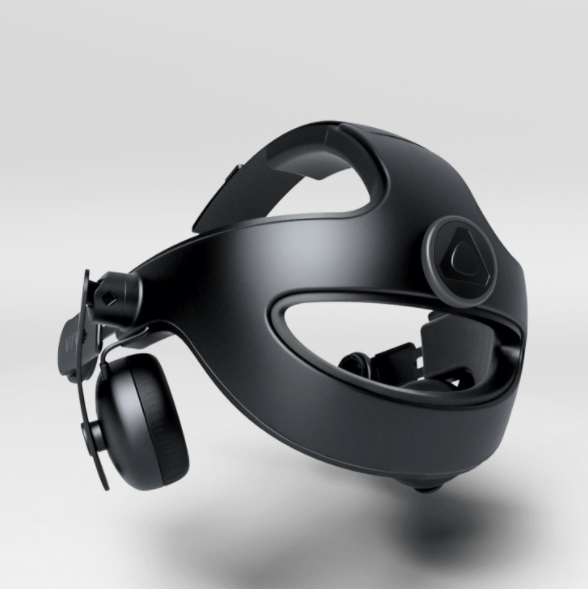 The built in phones are of the soft, on ear variety that are attached on a swivel on either side of the set. Moving with a satisfying series of clicks, these stay securely in place once positioned. Getting them into position is also simple, as there is enough give to fall in place on any head, short of a Ferengi. The idea of not blindly grasping for the headphones after putting on the headset is benefit enough, but it would mean nothing if there was a drastic drop in sound quality. That wasn’t the case here.

During testing, there was a slight drop in bass quality when compared to our ridiculously overpriced sets that we prefer and the range wasn’t as expansive. However, when comparing the quality and comfort to the vast majority of headphones, overpriced or otherwise, that have gained a foothold in the market, these come out ahead. They sound much better than pretty much anything else in the price range.

She’s looking at a VR rendering of her VR headset strap.

As an add on, the Vive Deluxe Audio Strap improves upon the base Vive in remarkable ways. It renders the headset more comfortable and inviting and encourages longer play sessions. Indeed, the actual strap design should become the default, seeing as how it is that much better. What is central to this option, the headphones, certainly wasn’t skimped upon, and managed to convince me to leave them in place. All said, this is absolutely worth the investment for anyone eager to spend more time in the fantastical worlds that virtual reality can offer.