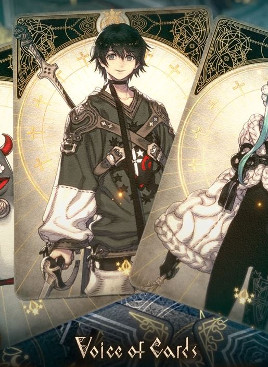 Voice of Cards: The Forsaken Maiden

Voice of Cards: The Isle Dragon Roars was one of the more surprising titles from last year. It was a traditional JRPG where the whole story was told through the medium of cards in the style of a tabletop game. It was an homage to class RPGs with a very accessible, straightforward approach. This unique game seemed like one off but without warning a second game was announced. Voice of Cards: The Forsaken Maiden is the newest venture into the world composed of cards. Neither prequel or sequel, it is its own entity can be played separately from its predecessor.

In a chain of remote islands the hero is working on finishing up construction on his ship. He’s with Laty, a young woman who lost the ability the speak and failed in her destiny to become a maiden. Maidens are essential protectors of the island, and without Laty stepping into the role the island they call home is destined for destruction. Joined by Lac, an apparent stuff animal with magical abilities, the three set off on a journey to learn more about Laty’s past and prevent that prophesized doom by sailing to other islands to acquire the sacred artifacts from other maidens.

Upon looking at the screenshots and name it is easy to assume that Voice of Cards is a deck building game. This would be incorrect. Like its predecessor, Voice of Cards: The Forsaken Maiden is a role-playing game where the use of cards is simply an artistic design choice. The master’s narration, the use of gems and dice in combat are meant to simulate the feel of a tabletop gaming experience. The cards are used for everything: characters, abilities, weapons, monsters etc. but in all other regards this a classic turn-based RPG. 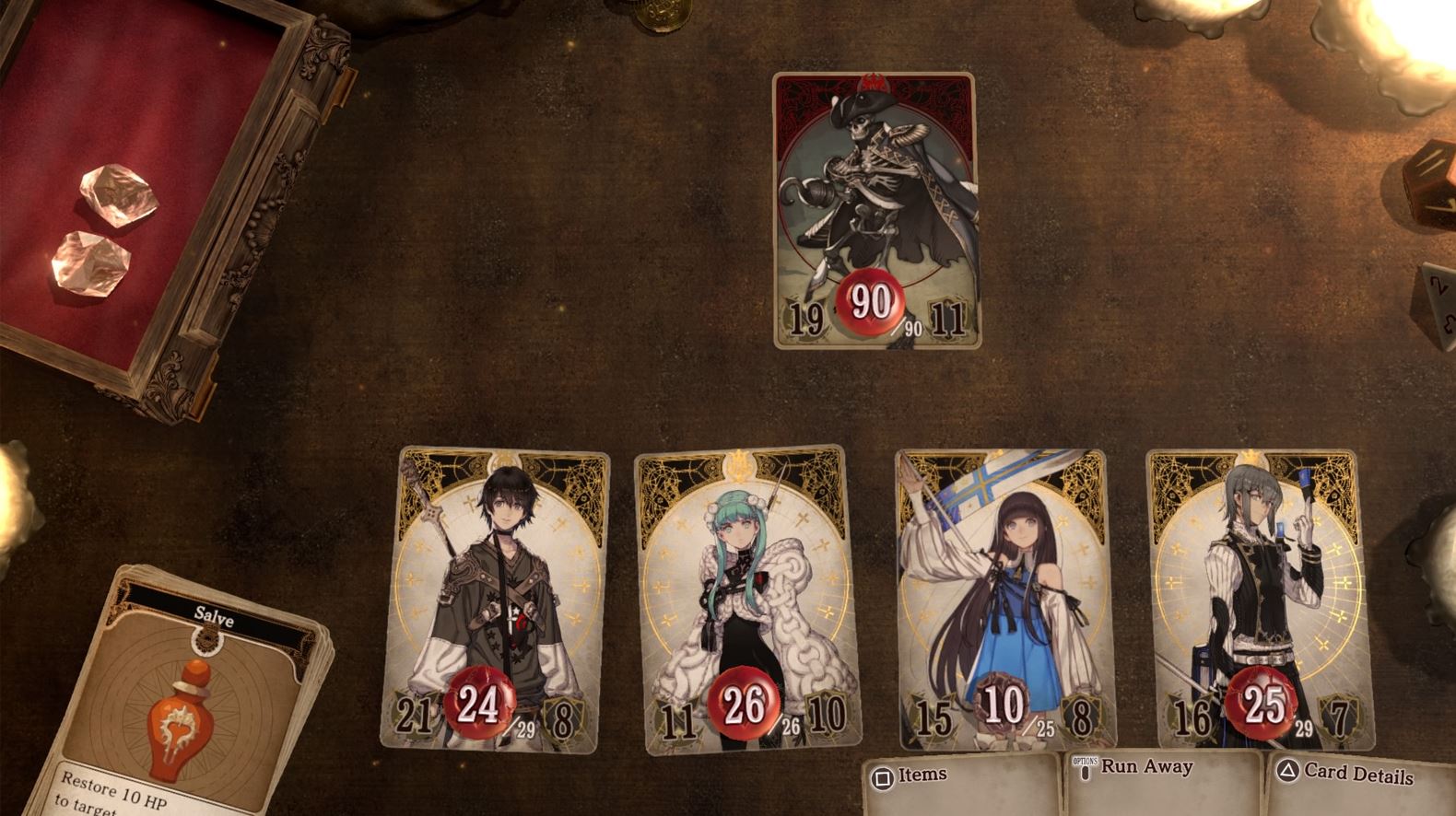 The word of The Forsaken Maiden seems more open than its predecessor, largely due to gaining access to a ship early on. The world is a series of downfacing cards that become uncovered as the player travels over them. The artistic style is reminiscent of old top down RPGs, where the landscape assets are obvious cut and paste them. This design choice recreates the charm of classic games though the graphic quality is higher. It’s recommended that the player explore the world until every card is turned up as there are plenty of hidden treasures and events to be uncovered. Some events include random encounters with merchants or crab fishers, though there are also some fixed locations with treasure boxes and shipwrecks to plunder.

The battle system is also more challenging than its predecessor. For those who are familiar this isn’t saying much as a common criticism of The Isle Dragon Roars was that it’s too easy. The Forsaken Maiden enemies do put up a bit more of a fight and while the challenge is greater the difficulty is still on the easier end of the spectrum. Battles are turn-based and the player generates one gem every turn. Aside from using items or just the basic attack, each action uses a certain number of gems. Knowing what every assigned skill is and the gem cost is an important part of strategy, especially in boss fights where group healing abilities are practically essential. The combat is a little more advanced this time around as depending on what section is being played there may be four party members instead of three. Characters that have strong bonds with each other have combo attacks that are very powerful but expensive in gem consumption. The recreate the feel of a table top game the gems are kept in a box and animated dice are rolled on screen for abilities that require a certain rolled number for success. It nicely recreates the atmosphere of playing Dungeons & Dragons with friends even if it is single player game with the CPU playing the role of dungeon master. 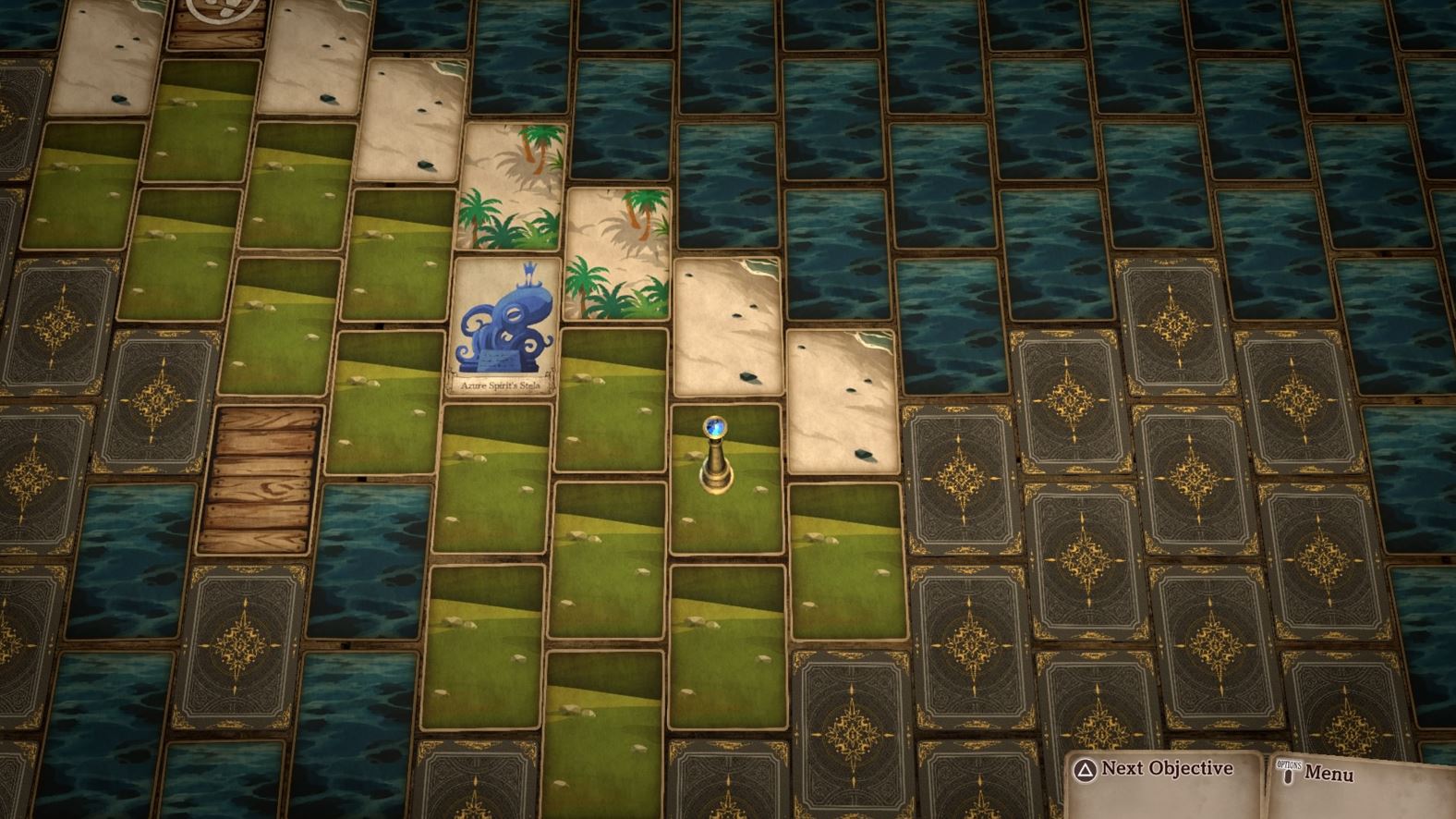 What seems to be a Voice of Cards tradition is the parlor where players can play a unique card game. It’s about matching two or three cards of the same value or collecting three cards of consecutive value. This is about 25 percent skill and 75 percent luck, and that luck number might feel even higher in some of the more complicated variations where add skills to the cards or random effects such as being able to move everyone’s hand one player to right or destroying another player’s hand. It can be rather fun for a game or two and this is the one activity that can be played with friends online.

Yoko Taro is the creative director, and chances are if that name means anything to you it conjures up an expectation that this is going to be filled with many moments of soul crushing depression. The Forsaken Maiden might not reach the level of bleakness of some of Taro’s other works but he is a master at making games that make the player feel something. Whether it is pertaining to the story of the maidens found on other islands or unraveling the mysteries of Laty’s broken hearted silence, there are plenty of instances where sorrow gets interjected into the player’s sense of enjoyment. 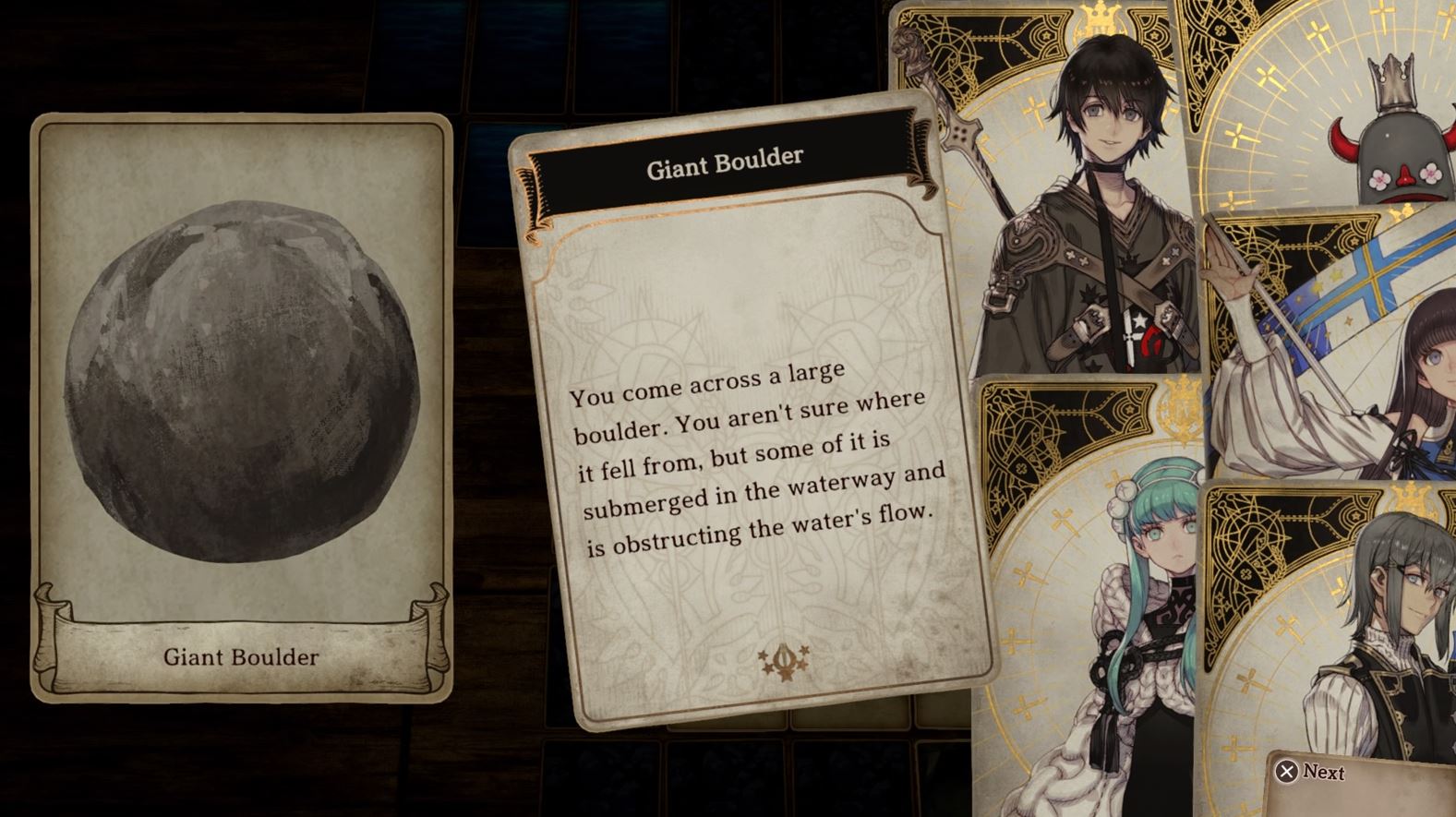 Voice of Cards: The Forsaken Maiden offers a rather straight forward RPG experience with a story that is more captivating than its predecessor. Throughout the story’s progression, the player will travel to other islands and meet the other maidens. Each of the areas has a culture that’s distinctly different from one other and each maiden has their own set of obstacles they need to overcome. Some of the circumstances are on the more predictable side while some other turn of events are unexpected and more disturbing. The Forsaken Maiden takes the player on a memorable journey. The mechanics may be on the simpler side compared to many other contemporary RPGs but they work on a level that is appropriate to the goal of recreating the feel of a table top. More importantly, the story is captivating enough to keep the player invested in seeing to the conclusion.

From a performance standpoint there isn’t much to complain about, but this also isn’t a game that is designed to push any processors to the limit. It does use a random encounter system for battles and other more random events, which can interrupt the pacing when trying to explore a large dungeon. There were a couple instances were a dramatic event was taking place and during the three-card distance to the climatic event of a scene a random battle happened that ruined any dramatic effect that was established just seconds prior. The encounter rate can seem a little too high with some attack animations and loading for battle screens taking what feels like a couple seconds too long. This is patterned after older games and sometimes it does feel like one. Another name that may ring a bell is music director Keiichi Okabe, who is establishing quite a name for himself as one of the great current video game composers. There is DLC that can be purchased separately that incorporates music the evokes a time when androids fought machines for the sake of humanity, and while that sounds intriguing the original music for The Forsaken Maiden is simply fantastic. There are parts that are evocative of Okabe’s previous compositions but the music written for this game complements its scenes perfectly. 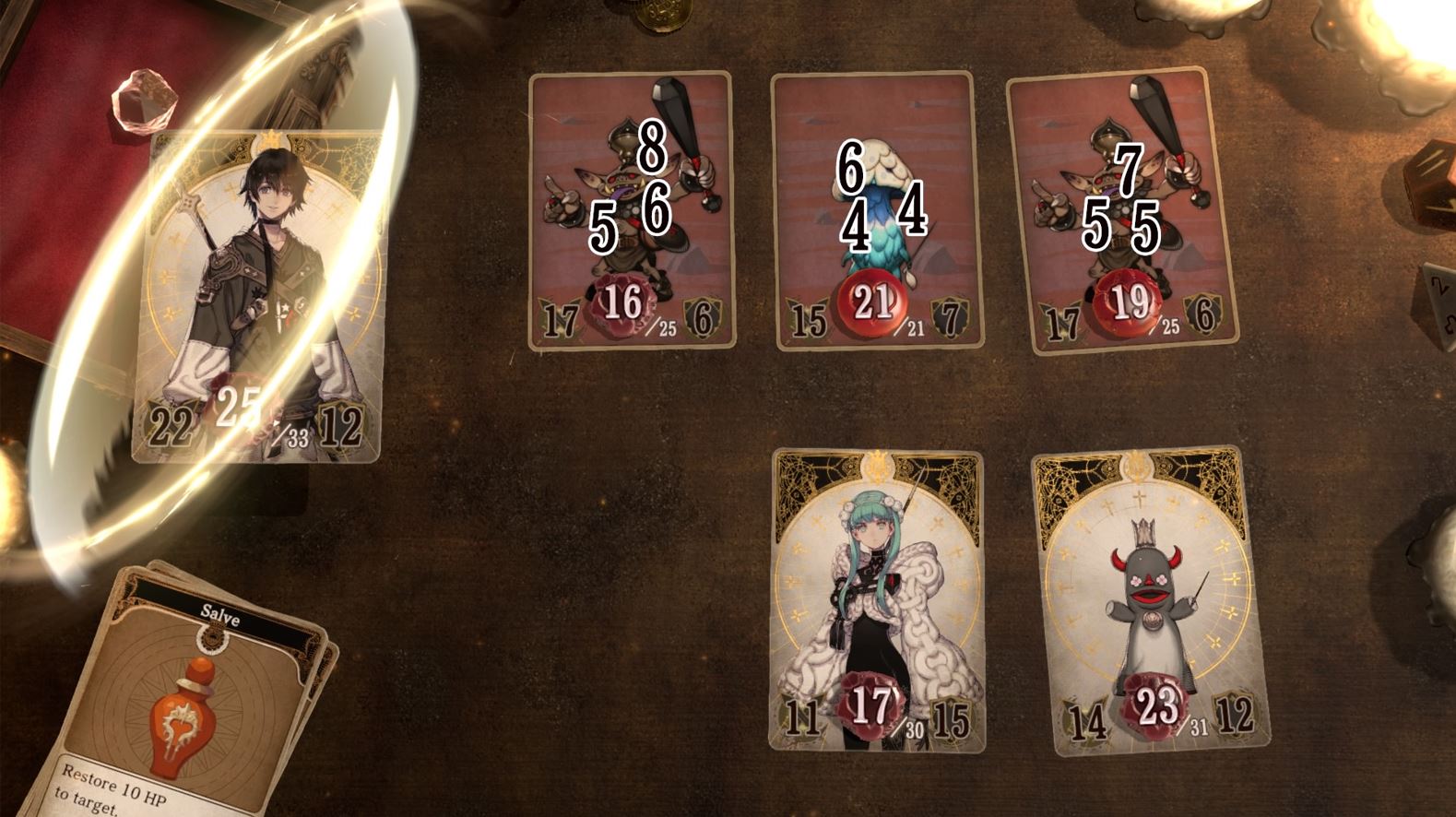 Voice of Cards: The Forsaken Maiden is a great follow up to the The Isle Dragon Roars. Many assets are reused and the core elements remain the same but the follow up makes some overall improvements. The difficulty has been increased a little but it’s still easy enough where this can be considered a relaxing game, which can actually be nice where the player can focus more on enjoying the story. The story may rely on some tropes and themes that have been used in other RPGs but manages to take some of these things and twists them into new directions. As the second game in what is now a series, The Forsaken Maiden maintains the core mechanics and overall feel of its predecessor while making some minor improvements and introducing a brand new story that can be enjoyed on its own. When the first Voice of Cards was announced, I was uncertain what to make of it, but after playing the second game, there’s hope that this won’t be the last one.