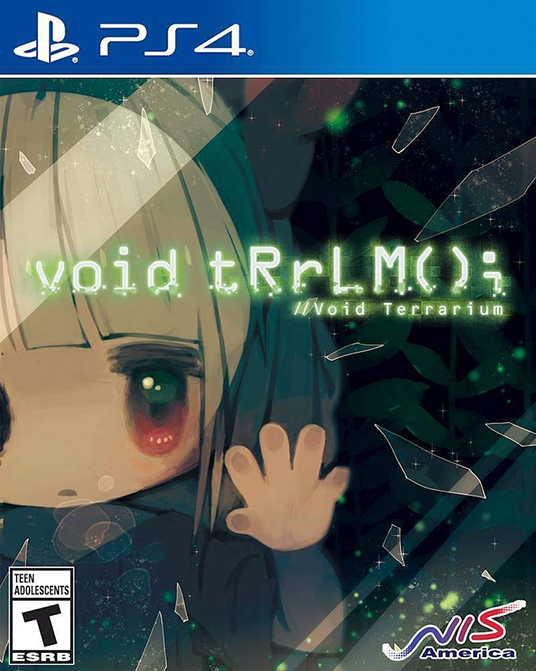 Complex life on land has existed on Earth for well over three hundred million years while humanity’s civilizations have only been around thirty thousand at most.  That’s 0.01% of land-bound Earth’s history, being generous with the numbers.  Multiple major extinctions have ravaged the planet and life keeps moving on, and there’s no reason to believe that won’t be true after humanity has disappeared.  The only difference is that we might, unlike the dinosaurs, be clever enough to create our successors.  Not smart, mind you, because otherwise there wouldn’t be a need for successors in the first place, but clever in a self-destructive way.  The world of Void Terrarium has been ravaged by a fungal apocalypse and life as we knew it is over, but while mushrooms aren’t known for doing much more than growing AI robots can think and take action.  Humanity is dead and gone but human-descended sentience still has a chance to move forward and maybe tie up a few loose ends along the way.

A little maintenance bot wakes up one day with no memory of what it had been before and sets out to explore wherever it is it found itself.  A little poking about reveals it’s basically in a trash heap and a little more exploration turns up the body of a human girl inside a huge cracked glass bottle.  Except it’s not a body, as it turns out, but just barely still alive.  Helping is far outside of anything a memory-wiped maintenance-bot can do, though, so it moves on and promptly stumbles on an AI that actually can be of use.  Together they decide to try and save the last human survivor, and after a little medical work and fixing the bottle so its interior can be free of the corruption that’s still ravaging the world, the situation stabilizes itself enough to start thinking beyond mere survival.

In classic dungeon-crawling RPG fashion, though, it’s going to take a lot of trips afield into new environments and dangers to get even that far.  Void Terrarium is cut from the same cloth as the Mystery Dungeon series, in which you take a character that starts at level one each time a new dungeon-run starts and try to clear as many floors as possible to win the next Widget of Survival, while also scavenging as much along the way as possible.  Void Terrarium‘s originality is in its setting and scenario, and that’s perfectly fine.  The dungeon crawl may be familiar but it’s also as enjoyable as ever and it has a good set of unique mechanics to play with in the endless quest to survive the next run. 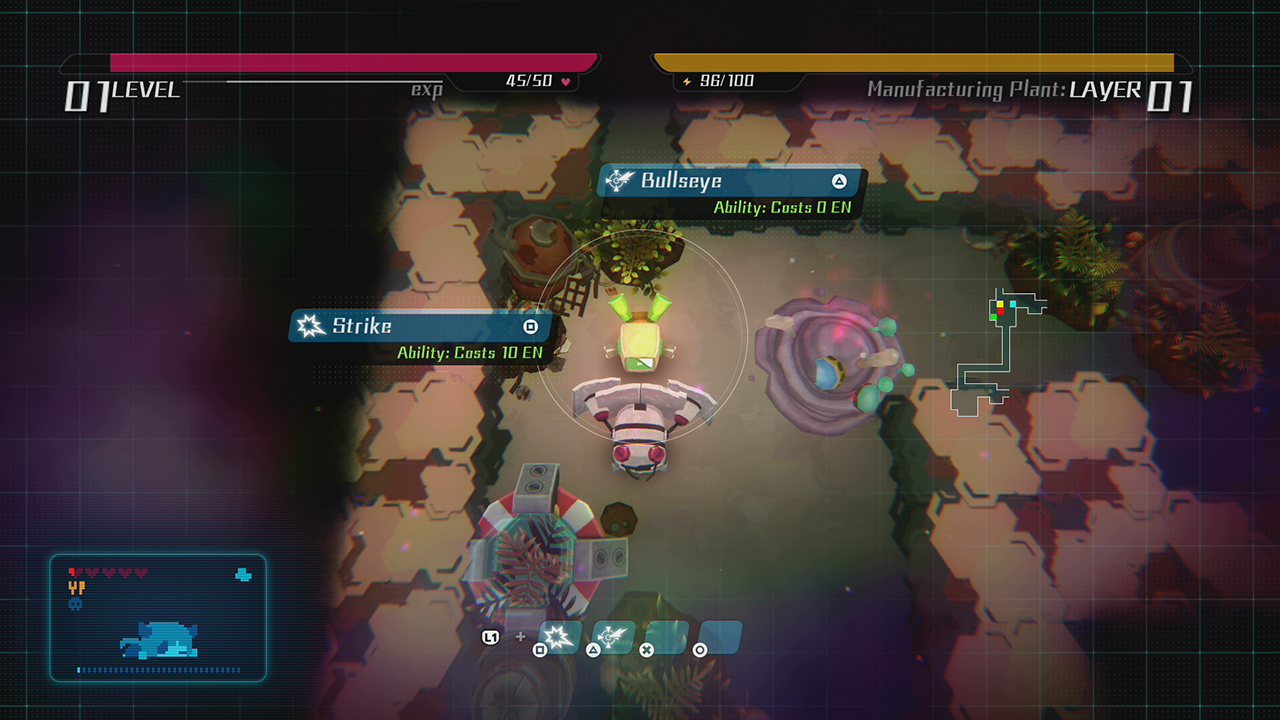 Each dungeon is randomly generated on a grid, with rooms connected by corridors or varying lengths.  In a room you can see everything, at least to the limits of the TV screen, and while in a corridor the view is shrunk to just a handful of squares there’s a mini-map of the whole floor that will always keep you oriented.  It doesn’t show the enemy robots and critters patrolling the dungeon, of course, but unless the robot is down to its last couple hitpoints that’s not really an issue.

Combat is simple, just hit a button for the regular attack.  The problem is that, being a robot, everything takes energy, and that includes moving.  The robot has two bars, one for health and the other for energy, and it’s necessary to keep an eye on both because when energy is at zero it starts drawing from health.  Repair kits keep health up, batteries are for energy and bio gel replenishes both.  And then there are weapons, armor, grenades that work against single enemies or gas an entire area, special items that do things like reveal all traps or generate a monster house and of course food items for the girl.  It’s a lot to keep track of in a limited inventory, but like all the robot’s stats there are various upgrade paths available. 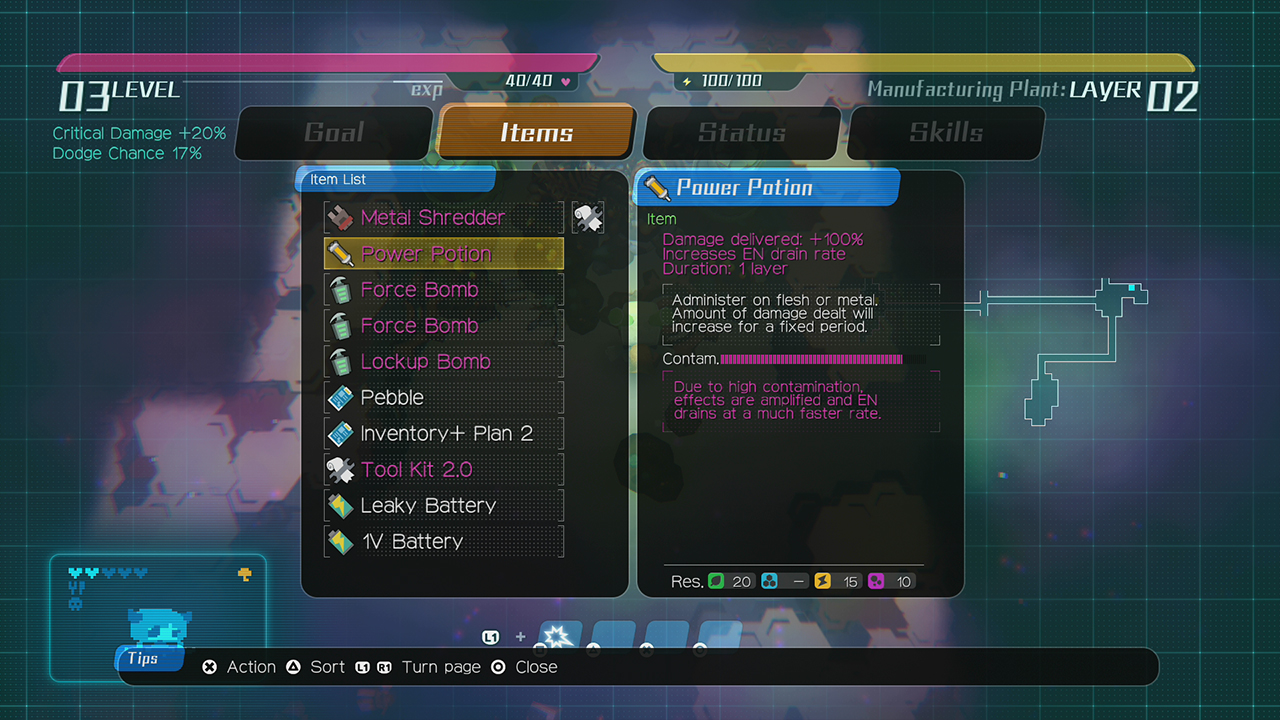 The easiest way is the temporary perks of a level-up.  While the robot starts off at level one it doesn’t take too many kills to earn the first level and that brings with it the first major choice of the run.  Rather than have a skill tree the game draws two skills at random, with a star ranking of one through five. A one-star skill might be something basic like +2 to attack or defense, while a two-star or better will give greater bonuses.  Five-star skills are fairly rare, and depending on your play style, may or may not be helpful.  Juggernaut, for example, is great for a robot that’s worked up its health-regen stat because it eliminates the standard attack and instead you charge through enemies to deal explosion damage.  Other five-star perks are more obviously useful, such as one that gives pluses to stats depending on what items you pick up.

As Void Terrarium goes on more and more ways to approach its dungeons become available.  One of the rarer drops is blueprints, which can provide new special skills or knacks, the latter of which is what other games would call classes or jobs.  Special skills are basically spells, with energy requirements ranging from cheap and easy to “maybe save it for a desperate occasion” expensive, while knacks don’t so much change the robot but rather the odds of drawing level-up perks.  The Carrier knack, for example, is much more likely to get inventory-expanding options, while Assassin can become a critical-hit machine.  A lot of it is down to luck of the draw, of course, but get enough levels and it all evens out.  The trick is to be able to stay away from home base long enough to earn them. 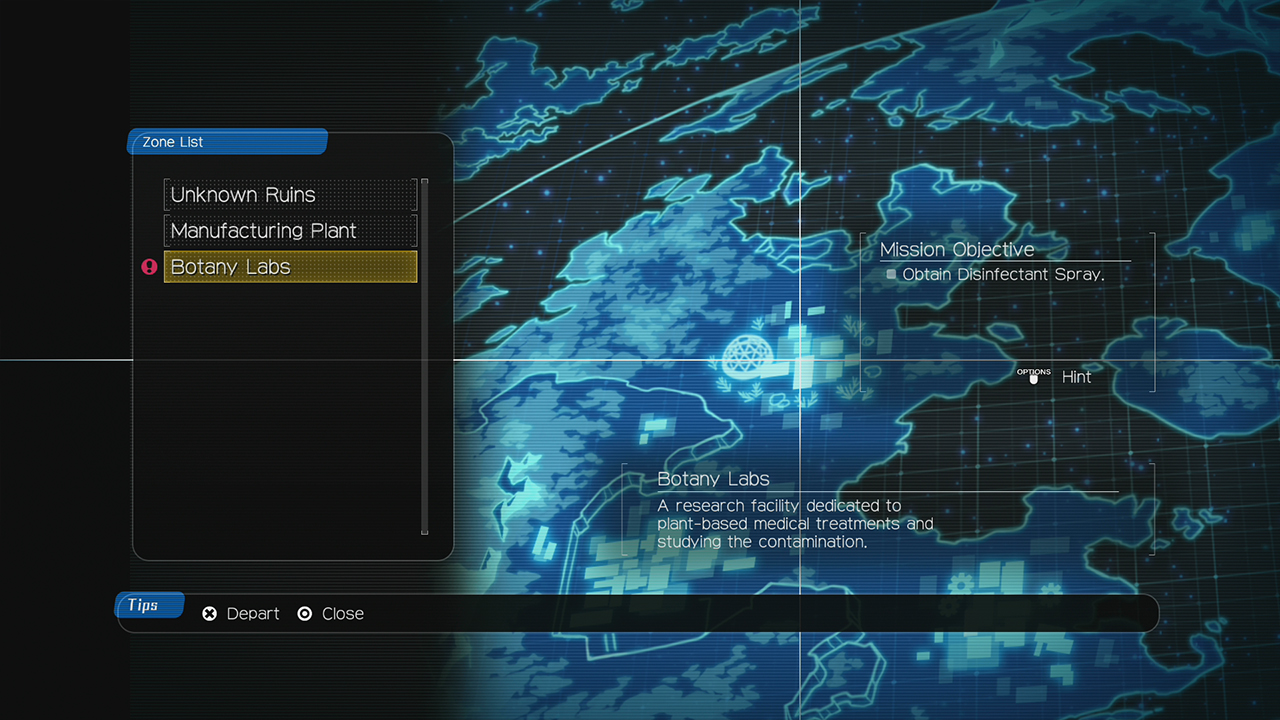 The girl, Toriko, simply isn’t designed for what the world has turned into and she needs regular attention to stay alive.  The primary reason to cut an expedition short is the hunger meter, which is draining at a slow but steady rate, but sometimes Toriko can get sick as well.  This is usually from either letting her hunger meter drop too far or feeding her contaminated food, but bad food is better than nothing when the stores are low.  Like everything in the game Toriko’s hunger meter can be leveled up and this is done by working on the terrarium part of Void Terrarium.

Every once in a while in the dungeon the robot will stumble across a strange part, like a steel rod or jellyfish cell.  At the end of each run all unused items are broken down to their component parts, like nature or energy, and stashed away to craft new items.  The blueprint items just need the plans for a one-time creation, but terrarium items can be made as many times as necessary so long as you’ve got the basic components and, for the more advance ones, the extra parts.  When crafting a terrarium item for the first time it not only gives a nice new decoration but also a one-time bonus, whether that be attack or defense, the ability to specify an unwanted skill not be drawn on level-up, or even improving Toriko’s hunger meter.  The items tell you what the bonus will be, so there’s no wasting crafting materials on getting a useless perk, and it also builds up a nice variety of decorations to create a cozy home for Toriko.

Which brings us to the only real issue I’ve got with Void Terrarium, which is basically that Toriko is a pet.  She’s helpless, doesn’t say a word, barely does much in her glass bottle home and has only the slightest trace of anything that might be considered a personality.  She likes some foods and hates others, and has unique interactions with certain decorations, but that’s not much to work with.  Even the Nurture action is just the robot patting Toriko on the head, although to be fair that’s also the only physical interaction it has with the other AI it works with.  Void Terrarium even drives the point home with Toriko’s monitor, which is a Tamagotchi-like interface called the Pet Nanny.  I get it, the last human is a helpless child in a world that it can’t survive in, but at some point this just becomes creepy. 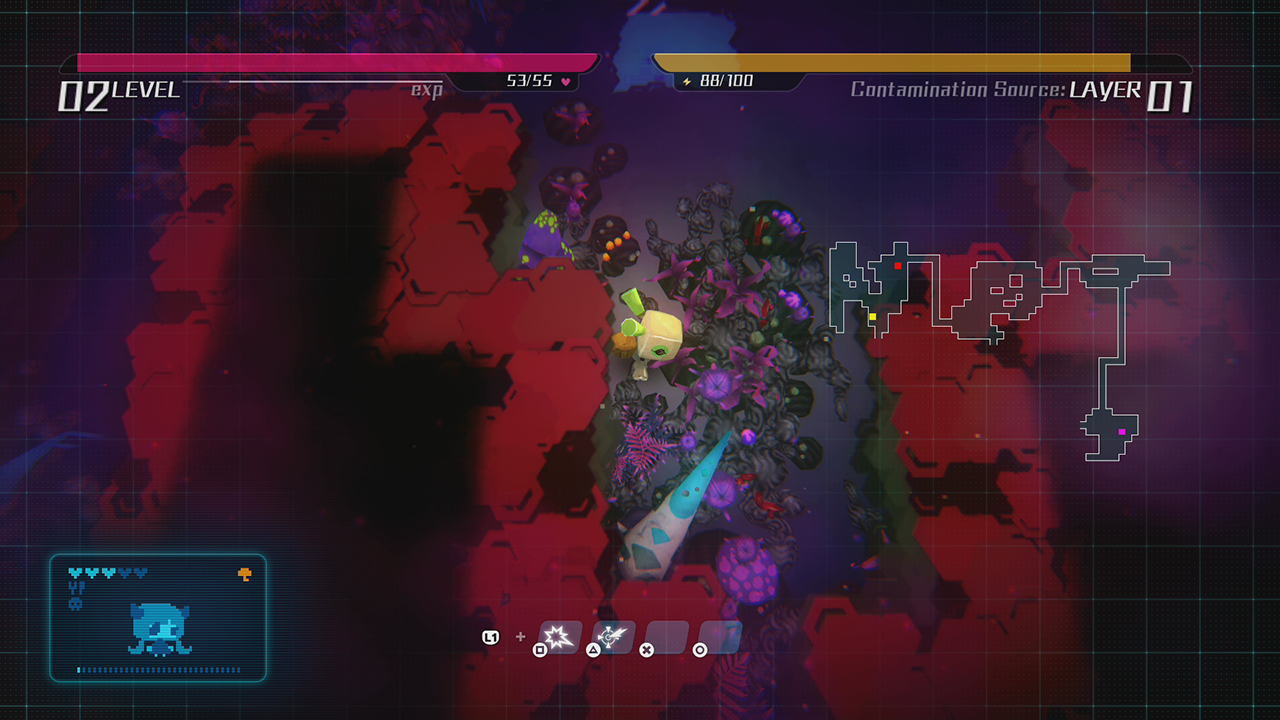 While it would be nice to see Toriko as more of a character, everything else in Void Terrarium is bursting with charm.  A dark charm in certain cases, such as the remorse felt by factoryAI for killing the humans (not a spoiler, this is revealed early) who built the underground world they’re all trapped in, but overall it’s a cute and likable apocalypse.  The pressure of taking care of Toriko is always there but never overwhelming and experimenting with builds to tackle the next dungeon run can yield impressive results once you’ve unlocked the ability to choose more than one Knack.  There are some difficulty spikes to deal with but nothing overwhelming, especially when you take a quick look through the robot’s inventory and consider how helpful a sleep grenade might be.  A particularly good run might even see you intentionally setting off Monster Houses just for the fun of knocking down a few dozen enemies and combing through the loot.  Void Terrarium is a strange and beautiful dungeon crawling RPG, and despite the familiar genre, manages to feel like there’s nothing else out there like it.