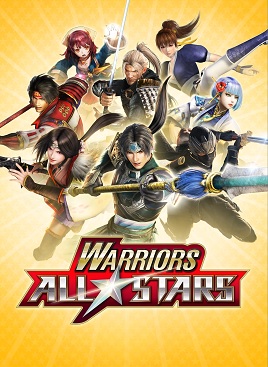 Another month, another Musou game. It’s a simple matter to dismiss Omega Force’s prolific Warriors series as one that’s simply milking the formula for all that it’s worth. Even dedicated fans can find themselves asking, to no one in particular, “really?” This year feels even more over the top than before, with anime adaptations, strategy games and spin-off series launching one after the other. Yet, the developers always make an effort to give each title its own flavor, its own feel. Each comes with a noticeable, but almost intangible, difference that takes the tried and true gameplay and tweaks it. Omega Force’s latest, Warriors All-Stars, is different. Pulling protagonists from all over Koei Tecmo’s stable of characters, this is a heavily anime-tinged, and almost self-consciously silly, take on the evolution of the beat ’em up. It’s something that the series needed.

No fan service inspired crossover project can get by without a convoluted plot to bring the heroes together and Omega Force didn’t disappoint. In a world populated by furry bait anime creatures, one fixture is more important than any other: the Spring. A small body of water from which all life springs forth, it has been the subject of numerous legends. It is also dying. Using the Spring’s last remaining magical power, three royal children perform a rite to summon heroes from realms near and far. Heroes that, according to legend, will rescue the world and resurrect the Spring via the healing arts of knocking innumerable heads together. Something goes wrong, though. Instead of the heroes arriving at a centralized location, they are scattered across the world, confused. Each of the three royal children look upon this situation and realize that world ending calamities and otherworldly screw ups are the perfect time to exercise their ambition. They each set forth to gather up heroes under their stable and convince them to not only rescue the Spring, but install their leader as the world’s ruler. Anime!

A game focusing on mashing franchises up needs to reach far and wide to create an enticing roster. Warriors All-Stars pulls this off. Expected battlefield specialists like Dynasty Warriors’ Lu Bu and Samurai Warriors’ Yukimura Sanada will face off against Ninja Gaiden’s Ryu and Dead or Alive’s Kasumi. As the Warriors Orochi series also exists, this is not too surprising. Then we have characters like Nobunyaga Oda, from Samurai Cats teaming up with Deception’s Laegrinna and things start to get weird. The developers made an intentional decision not to redraw the characters so that they have a unifying art style, giving conversations and battles a jarring lack of cohesion. As these are denizens of other worlds, each with existing fans, it makes sense to maintain the original look of each hero, and frankly, redrawing Sophie from the Atelier series so that she looks more in line with a Musou title would have robbed it of some of the charm. 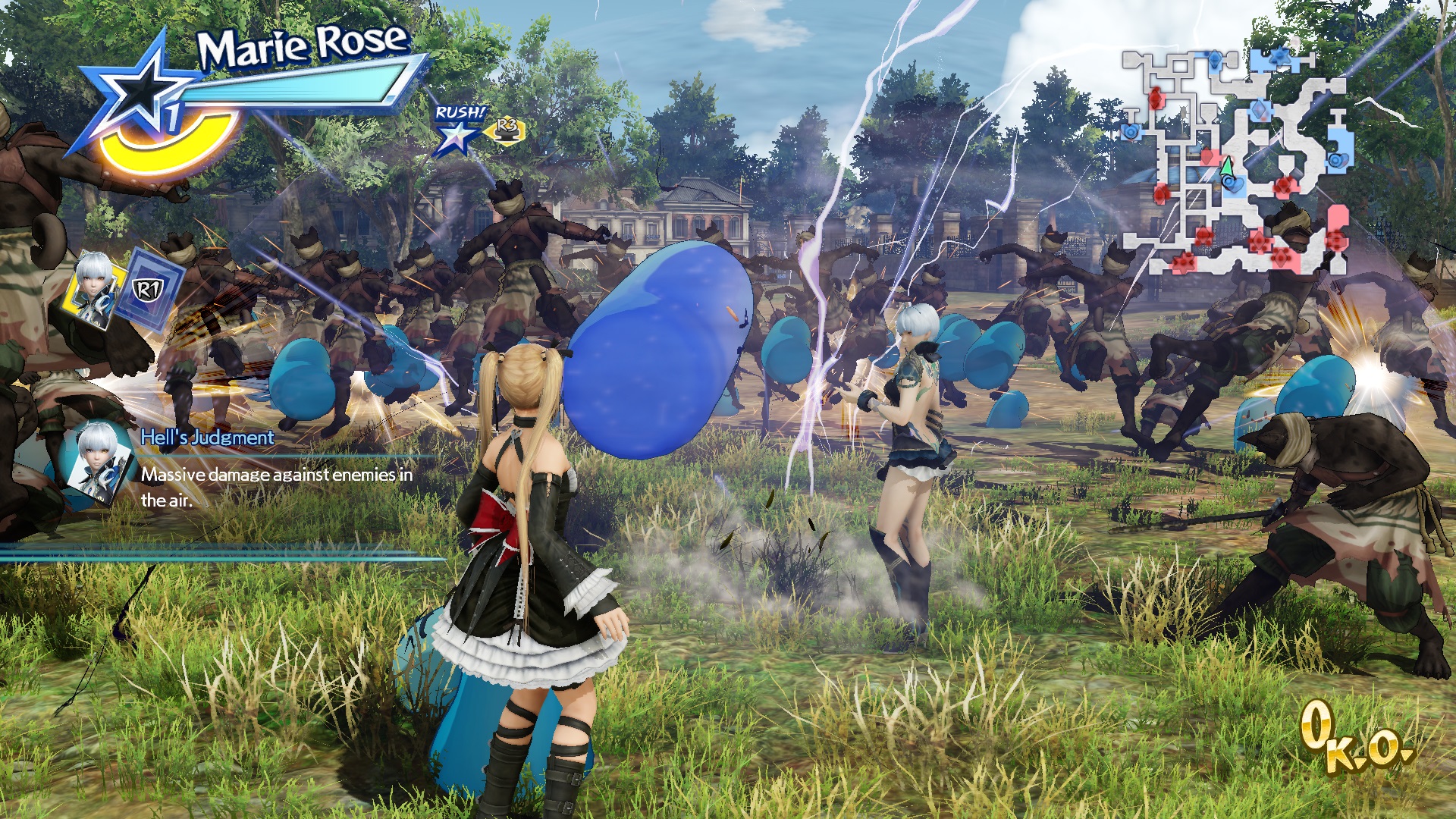 The developers did ensure that the heroes fight like they belong in the same game. My current favorite is Deception’s Laegrinna. For those unfamiliar with the Deception series, it centers around setting chains of traps to send encroaching heroes to embarrassing demises. The “protagonist” is weak in direct combat and must use a malevolent cleverness to punish the righteous.  Omega Force translated this into a Warriors character by giving her the ability to throw out a river of traps in front of her, giving her a range that expands the further along the combo string the player goes. Laegrinna can also lay stationary traps during her combo string that can be triggered by pressing the strong attack button. It really works, capturing the flavor of the reference source’s gameplay while still feeling like a straight up Musou title. This type of attention was paid to all of the oddball characters and the game is much more interesting because of it. The only potential complaint that can be leveled at the character selection is in the fact that it is much smaller than that last major cross over title in the series, Warriors Orochi 3.

The battles themselves will feel quite familiar to series veterans. Throughout the stages, players are given primary and secondary objectives to complete as they work their way across the field, conquering bases that give passive buffs and provide much needed health items. The wrinkle here is in the Bravery system. At the start of the stage, the player is at a level one Bravery and enemy officers will have their own Bravery level attached. Through accomplishing side missions and just plain knocking the crud out of the enemy, the player’s Bravery level will increase, bolstering their stats. This system is in addition to the already existing character level systems, weapons equipped and use of support characters that join the player in battle. The other fresh introduction comes in the form of the Musou rush. Clicking the right stick activates this mode, and the player has a limited time to cause as many enemy casualties as possible. The enemies don’t stop coming here. Time is added when the player does well enough to cause a supporting character to pop up on the side of the screen and start cheering. In short order, there will be four characters cheering, the player is knocking hundreds of enemies into the air, all to a rainbow colored overlay and peppy music, creating a moment that causes one to wonder what illicit substances the design team was enjoying. It’s bizarrely cool. 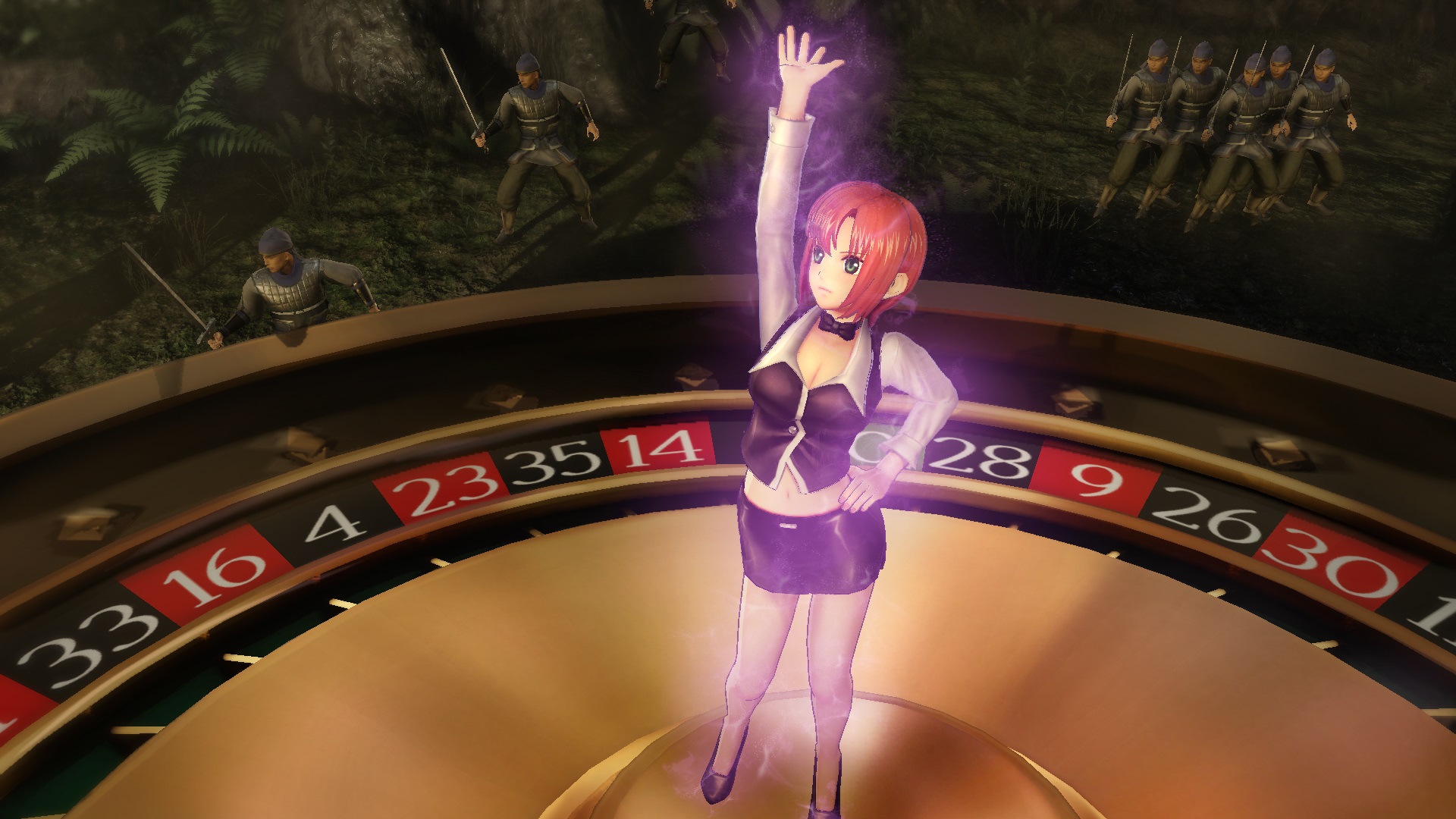 One new aspect to character improvement comes in the form of the equipable cards. This can be confounding initially as some cards can be fed to other cards, like a free-to-play mobile game. They can also be broken down, sold and enhanced. The easiest way to get around this is just to think of them as weapons. That’s all they are in the end. Once the player switches their internal understanding, the collection of these things makes perfect sense. It’s almost as though the developer realized that cards were popular right now and wanted to capitalize on the trend, but didn’t know how to do it.

The biggest issue here comes in the form of the lack of multiplayer. These games were made for the cooperative experience. Playing Final Fight solo is a decent time, but playing with a friend is so much better. As these games are the evolution of that style of play, it brings along the same needs. This is a drum that has been beaten before and it’s one that will continue to pop up as long as Omega Force ignores the best feature of the series since Dynasty Warriors 3. For the record, it doesn’t need to be online. We’re just looking for local co-op and are willing to except that the framerate and pop in will go pear shaped when rendering that stuff. We’re used to it and don’t mind.

Lack of local multiplayer notwithstanding, Warriors All-Stars is another worthy entry into the Musou series. This is one for fans who want to get a little silly with it and ones who have an affinity for other Koei Tecmo titles. It provides players with a respectable roster of heroes that don’t belong together to go to town, creating a unique experience under a well-known template. It also provides hours of gameplay, with branching paths and multiple heroes to use. Most importantly, it is rife with opportunities to inspire the Rule 34 crowd. They come aboard and the franchise is set for life.