As a Kickstarter game, Wasteland 2 was explicitly made for a reasonably small group of people. These individuals, including myself, will find a lot to love in the game. It delivers on what was promised: a top view post-apocalyptic RPG that harkens back to the days of Wasteland, Fallout and Fallout 2. With creator Brain Fargo, the humor and signature style that was one of the reasons for the success of the original games shines through, a style that has since evolved into the Bethesda era in different directions. Unfortunately, it won’t appeal to many beyond this group. The reason for this is that while you can grow to love the game, you’ll also have to be very forgiving of it. It has glitches, graphical issues, control issues and little problems with the inventory and character management screens; none of which are crippling, but many are illusion shattering or cause the player to scratch their heads wondering where their items went. Visual glitches are especially annoying because this isn’t a pretty game in the first place, so you already have to use your imagination. When you see the character animations for climbing down a ladder when your character is supposed to be ascending, you have to stop and figure out what just happened before continuing with whatever harrowing combat situation you’ve found yourself in.

Combat is good for the most part, an increasingly difficult series of turn-based tactical puzzle to solve or try to avoid on your way through the wasteland. Combat has real consequences, including character perma-death and ammunition scarcity, especially early on. You have to be careful and thoughtful with your choices, especially regarding which factions to pick a fight with. It’s also important to save often, unless you’re the sort of extremely hardcore player that doesn’t mind or even enjoys dealing with the potentially crippling consequences of your actions. Furthermore, the reliance on dice rolls means that two battles fought the same way twice might have wildly different outcomes. The variety of weapons makes for some interesting team management and strategizing between fights.

Speaking of which, Wasteland 2 differs from most post-apocalyptic RPGs (except the original Wasteland) in that rather than having to manage a single character’s skills and traits and create a balanced team of existing characters to support him, you are tasked at the outset with building four characters. You’ll intermediately realize that there’s no such thing as a “balanced build” as you’re not so much deciding what you’ll be particularly strong in, but rather what you are sacrificing entirely. Putting a few points here and there into this and that doesn’t have much utility. What you want is a set of characters who sacrifice the least in terms of speech checks (there are 3 separate kinds of speech checks), ability to unlock treasure chests and so on. At first it might seem sensible to make one character a pure non-combatant with lots of other skills, but having a “weapons expert” and a “tech expert” doesn’t make sense in the combat system where every character gets their turn and you’re going to want everyone to know at least one weapon, and weapons diversity is essential in your party mostly due to the limited ammo. It is also essential to focus on combat because there is no concept of stealth and you will eventually find yourself in combat.Periodically, other characters will ask to join your party. Early on in the game this is fun but after a while these individuals will become indispensable to your combat and item acquisition strategy and so swapping out a character rarely makes any sense. This is especially annoying because they don’t get added to your stable of potential teammates if not immediately swapped out. 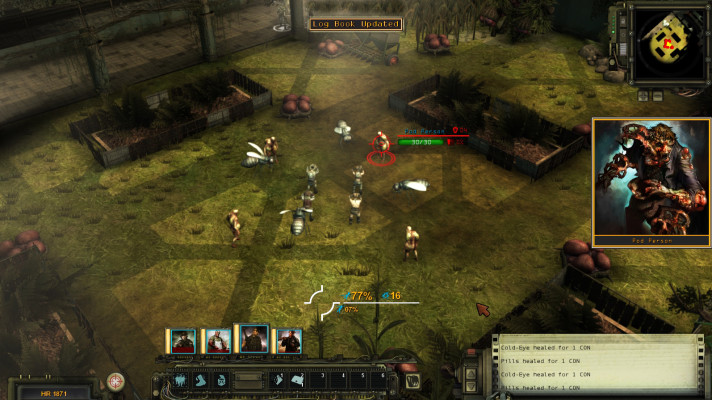 As previously mentioned, the graphics and control systems require a forgiving demeanor. The character art is strong in places in a way reminiscent of old Magic: the Gathering cards, however, the drawings often don’t match the rendered characters in a way that is distracting. The camera rotation also can make navigation confusing. In Fallout 2, where you’re not allowed to move the camera, all doors, characters and items have to be visible from your limited perspective. Since Wasteland 2 allows for camera rotation, it is very easy to miss doors and items and in a few instances I was unable to proceed until I’d explored the environment multiple times from all angles.

The dialog system is confusing. The idea is that instead of the “make sure you click everything or you’ll miss something” dialogue trees of the Fallout games, dialogue can be custom typed and the game will identify the keywords and pull up the appropriate response, but this system doesn’t work as intended. Nothing happens if I try to type in the sort of question that needs to be asked with the appropriate keyword. I’ve tested this system by typing in just the keyword or even the exact suggested sentence displayed for the keyword, but this only works rarely in a way that makes the system seem completely broken. It’s even difficult to select the text box; this means that you’re just parsing through dialogue trees except simpler because you’re just clicking every word on the list.

Wasteland 2 Kickstarter backers will get what they paid for plus a few glitches they didn’t. The game doesn’t live up to its ambitions in a number of places, most notably the dialogue system. Graphics and gameplay are outdated and the combat system makes for slow progression as it did in the entire genre before Fallout 3. A throwback game that a mass audience will enjoy needs to be smooth and pretty (i.e. Mario Bros or DKC for the Wii), but Wasteland 2 is too often crude. That being said, the intended audience — the ones who took the risk of financing it where the only return on their investment was being able to play it — have a whole new post-apocalyptic universe to explore, understand and bend to their will. Wasteland 2 belongs to its community who I’m sure will be discussing it, playing it, replaying it, searching out every last little secret and modding it for years to come.