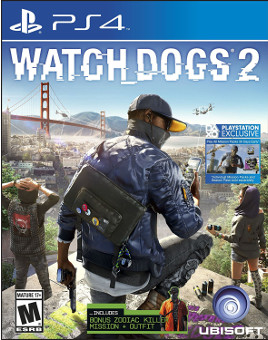 Being a sequel isn’t all it’s cracked up to be. More often than not they end up either being criticized for failing to live up to lofty expectations set by their predecessor, or because their predecessor failed to live up to its own expectations, and the sequel is dismissed as not being worth anyone’s time. Watch Dogs was a good game that was well received by critics, but did have some issues that made the popular opinion more of a mixed bag. When working on Watch Dogs 2, Ubisoft listened to their critics and tried to address some of the complaints, such as how abysmal the driving controls were. The question is, were they able to craft an overall better game with the sequel?

Watch Dogs 2 leaves behind Aiden Pearce and Chicago and puts the player in the shoes of brilliant hacker Marcus Holloway in San Francisco, which is the newest city to be outfitted with ctOS. On the surface, ctOS brings connectivity and convenience to everyone, such as having a smart fridge that lets you know you’re running out of milk. This convenience comes with a price, though, as the Blume corporation is using ctOS to collect personal details from all its users to sell to the highest bidder for whatever nefarious purpose the buyer wishes to use the information for.

The battle begins with Marcus finding out some less than truthful information about himself in Blume’s database during his initiation into DedSec, a hacker organization that somewhat fancies themselves as being vigilantes and hacktivists. DedSec operates outside of the constraints that come with being a law abiding organization, but their activities tend to be targeted against what we would consider to be the bad guys, whether they be crooked businesses, cyber bullies, or corrupt religious organizations. DedSec is comprised of fascinating characters whose own developed personalities make them come alive and give the player a reason to care about them. The group is generally likable, but personally I found Wrench to be the most interesting of the DedSec supporting cast. 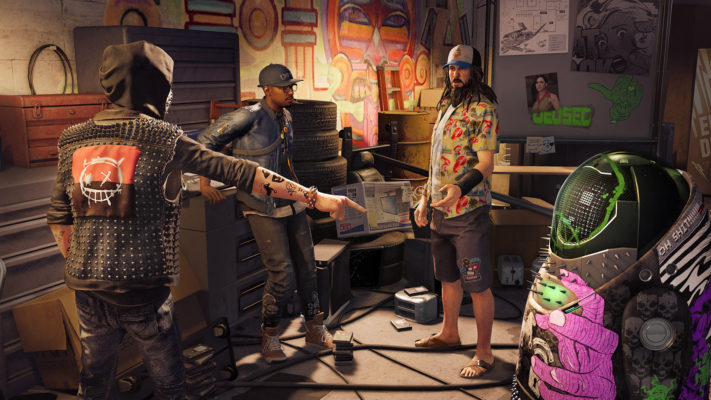 Watch Dogs 2 is an open world action game that begs to be compared to Grand Theft Auto, and these comparisons are not undeserved. GTA has always set the bar for this type of game, and Watch Dogs 2 strives to reach the level of quality we have come to expect from that franchise. The fictionalized version of San Francisco is huge and there’s no shortage of hidden secrets to uncover. There are side activities that have a GTA counterpart; for example, SF Driver is the Watch Dogs 2 version of Uber and it was obviously inspired from the GTA taxi side missions. Some of the SF Driver missions can be more interesting than simply taking the passenger from point A to point B; there was one daredevil customer in particular who paid Marcus to do a number of stunt jumps in the car.

The influence and similarities to Grand Theft Auto are undeniable, but Watch Dogs 2 should not be dismissed as a GTA clone but viewed more as an homage since there is plenty to distinguish it. For one, the tone is more light hearted in nature, and even though the hackivists have access to lethal weapons and their speech patterns have comparable dropping of F bombs, the underlying goal of trying to do what’s right through unlawful means is different than the overt criminal nature of many GTA missions. Plus, if one chooses to, it’s an entirely reasonable strategy to approach Watch Dogs 2 without killing anyone. I left dead bodies in my wake, but there are plenty of nonlethal combat options available. The choice of using hackers doesn’t just differentiate the two in theme but this also is a major element that adds to the uniqueness of Watch Dogs 2‘s gameplay. 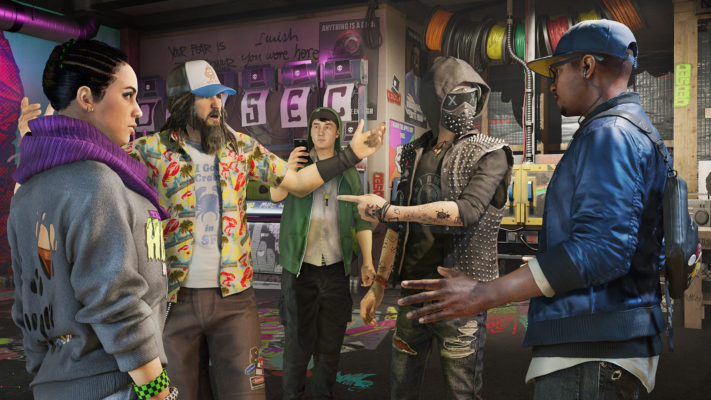 Hackin’ it in San Francisco does have some practical implications in progressing through the game, but it’s also a great way to just have some good old fashioned mayhem. In the hands of Marcus Holloway, a smartphone essentially becomes a source of super powers where he can bend the environment to his will. If those pesky cops won’t get off your tail, you can hack into the traffic lights and create a massive pile up in the intersection. Or if there is a gas line or water main under the road a quick swipe on the phone can cause it to blow, which always causes chaos in traffic. With the right allocation of research points, any vehicle can become your own personal remote control car, which can be used for practical purposes such as knocking down a wall, running someone over, or maybe you just are too lazy to walk over to steal a car the old fashioned way. Hacking a pursuer’s vehicle and throwing them in reverse is also good way to get rid of them. So much mayhem can be caused without actually putting Marcus in harm’s way.

There’s no shortage of objects to hack in San Francisco. Every person is fair game, and just targeting them will bring up their name, income, occupation, and some recent information as well as a few hacking options. You can read messages, eavesdrop on phone conversations, or even wire money from their bank account. It may paint DedSec in a hypocritical light since this is the type of thing they are going after Blume for, but DedSec is a group of vigilante antiheroes who operate in a moral grey area. Not all hackable items are visible to the naked eye, but Marcus can activate Nethack vision, which places an analog TV static filter on the world where all things hackable become apparent. This can be used to do things like rebuild network node connections or see far away cameras. Some items that need to be hacked might be out of range, but hijacking the right cameras can allow it to be hacked from the camera’s point of view. 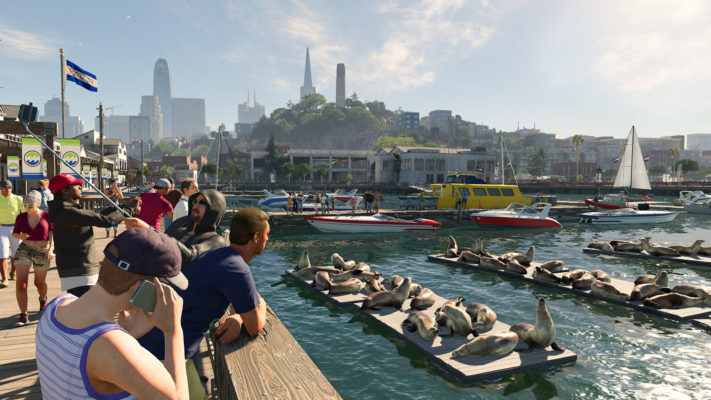 Watch Dogs 2 is full of missions that have a specific goal, but the player is not limited to achieving it one certain way. There are three main play styles recognized: Aggressor, Ghost, and Trickster. The player is encouraged to blend multiple styles together, but individual skill trees where research points can be spent fit certain styles better than others. Aggressor is for players who want to tackle their problems head on and shoot anyone giving them opposition. While there’s no shortage of firearms from the very high end 3D printer at the Hackerspace, this approach is not the most recommended specialty because if there’s a weak link in Watch Dogs 2, it’s in the gun combat mechanics. They are just serviceable, and while missions can be completed through gun battles, the mechanics feel very pedestrian compared to the other areas of the game. There were times where a shotgun blast to the face was the perfect solution to the current problem, but taking a gang head-on, gun blazing, didn’t generally end well.

Ghost is for stealth approaches, which is pretty self explanatory: sneak around, take care of the objective, and get out with no one knowing you were there. Trickster is about manipulating technology, both within the environment and Marcus’ two toys: the remote controlled jumper and his quadcopter drone. These devices can be used for hacking and scouting while Marcus hides back in safety, which can extend to triggering gasline explosions or nonlethal electric shocks to booby trap the environment. Improvising is also a key to success in Watch Dogs 2. For example, while progressing through a mission using primarily stealth, we were detected and a large group descended upon us. Knowing we were outgunned and would lose a fire fight, we used the hacking ability to call the cops on one enemy and a gang hit on another. Soon, there was a three way battle between the the original enemies, police, and the Sons of Ragnarok, and with Marcus now being the least of anyone’s problems, it was easy to slink away safely. 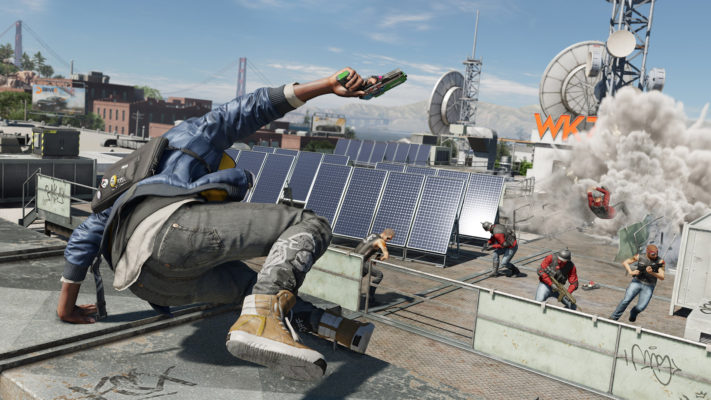 Seamless integration of multiplayer is one of the features that was touted for Watch Dogs 2, where the player can take a break from the single player campaign and engage with others. There are a few different things that can be done, one of them being Hacking Invasion, where you invade someone’s game and try to steal data from them while remaining undetected, or vice versa. Bounty Hunter is a PvP battle where one player is the hunted and has to elude capture from the police with up to three other players. This event is triggered by the player’s play style, so if they are constantly getting into it with the police they are more likely to be the one with the bounty on their head. There are cooperative, randomly generated events called DedSec Events where players can meet up with others and tackle an objective together, such as uploading a virus or hacking into a gang leader’s phone. The multiplayer functions are enjoyable, but they seem like a secondary activity that adds value to the game where the real focal point is the single player experience. Fortunately, online accessibility can be switched off if the player wants to make their session a solo experience.

Watch Dogs 2 has the presentation quality that one would expect from a AAA title as, whether we are talking about the detailed rendering of the city of San Francisco and the undeveloped countryside or the character models in the cutscenes, the visuals are spectacular. The dialog and voice acting is among the better performances seen in a video game, and they help maintain interest in the story. Marcus’s smartphone serves as a tool for selecting missions, accessing the map along with a number of other functions which has an intuitive user friendly interface, thematically fitting with the game. Changing weapons, gaining access to the remote controlled toys, and hacking everything around Marcus become second nature very quickly. Driving controls have been greatly improved over the predecessor, as well, as their handling is tighter, so weaving in and out traffic with minimal damage is easily accomplished. 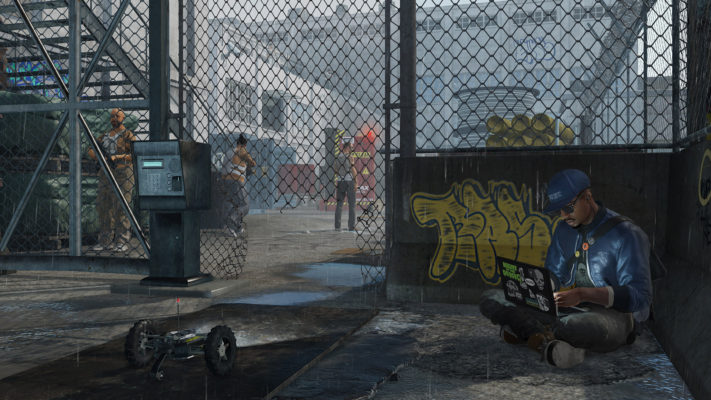 For the most part, Watch Dogs 2 does what sequels are supposed to do: keep what worked in its predecessor and address the issues that held it back. The main missions are amusing, but it’s easy to get side tracked by the large amount of side quests that are scattered throughout San Francisco. Ubisoft has successfully recreated what made Grand Theft Auto great, but incorporates enough original ideas to set Marcus’ journey apart and make it feel fresh. There’s plenty to do outside of the main campaign, and being able to hack the entire city adds a unique element of enjoyment, especially for those who have an inclination to cause mayhem. In the end, Watch Dogs 2 is simply one of the best games of 2016.