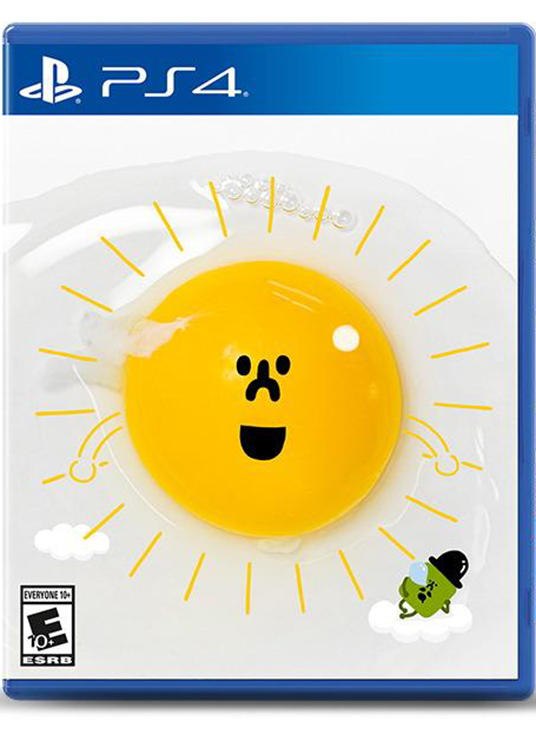 It’s hard to understate how important it is to just kick back and play.  Goofing around without a care is how creativity happens, not to mention the positive effects it has on what would otherwise be a daily grind of simple existence.  This whole giant hobby is designed around the idea of play, supporting endless studios creating the best they can while web sites like this one all try to find the best or most interesting way to have fun.  Sometimes games bind their actions with a tight set of rules while others throw open the doors and let you go nuts, but the goal is to give the player a moment of enjoyment while exploring the bounds of whatever they happen to be playing.  There have been plenty of games that look back at the history of the hobby, but not a whole lot that explore the underlying basis of why we’d want to do this in the first place.  Wattam is a joyfully upbeat game about the importance of play, with a major sub-theme about how much better it works with friends.

The Mayor is a green cube and he’s all alone in the darkness.  He doesn’t know how things got like this but the sadness has set in hard.  He lives on a good-sized grassy square adrift in emptiness, with the single feature being a large rock to sit on.  One day the Mayor wanders gloomily from the edge of the world back to the rock only to see something new — a small stone laying in the grass.  It says something about the Mayor’s mental state that this is worthy of investigation, but it’s for the best because on being picked up, the stone sprouts arms, legs and a face as it comes to life.  The stone is in a much cheerier mood than the Mayor so it doesn’t take long for it to start up a game of tag, but when it’s the stone’s turn to chase the Mayor it realized the large rock in the middle of the field is ready to wake up.  The population of the green plain is rising and each new addition brings along the chance to find even more friends.

While there’s an overarching story to follow, the real goal of Wattam is to make more friends.  Initially there’s just the Mayor so he’s the only one to play, but the right stick has been diverted from its usual role as a camera control and instead can be used to change the red arrow that indicates who you control.  Everyone is a different object and playable character, some of which have unique abilities and others are just fun to see.  One of the earliest new characters is an acorn that, once planted, grows into a sprout.  The way to grow a sprout is for everyone to join hands and circle-dance around it, at which point it rockets up into a huge tree that’s just begging to be climbed.  Whether you climb the tree or have everyone clamber over each other is up to you, but if you want a stack of characters five high then there’s no reason not to see if they can hold their balance.  The tree has a unique ability as well, though, and that’s to eat anyone and pop them out as fruit or at least some type of food item.  There’s even a mouth character who turns anyone it eats into a candy-colored swirly poop.  Which instantly leads to the question — can I build a giant stack of rainbow-poop characters and the answer of course is Yes. 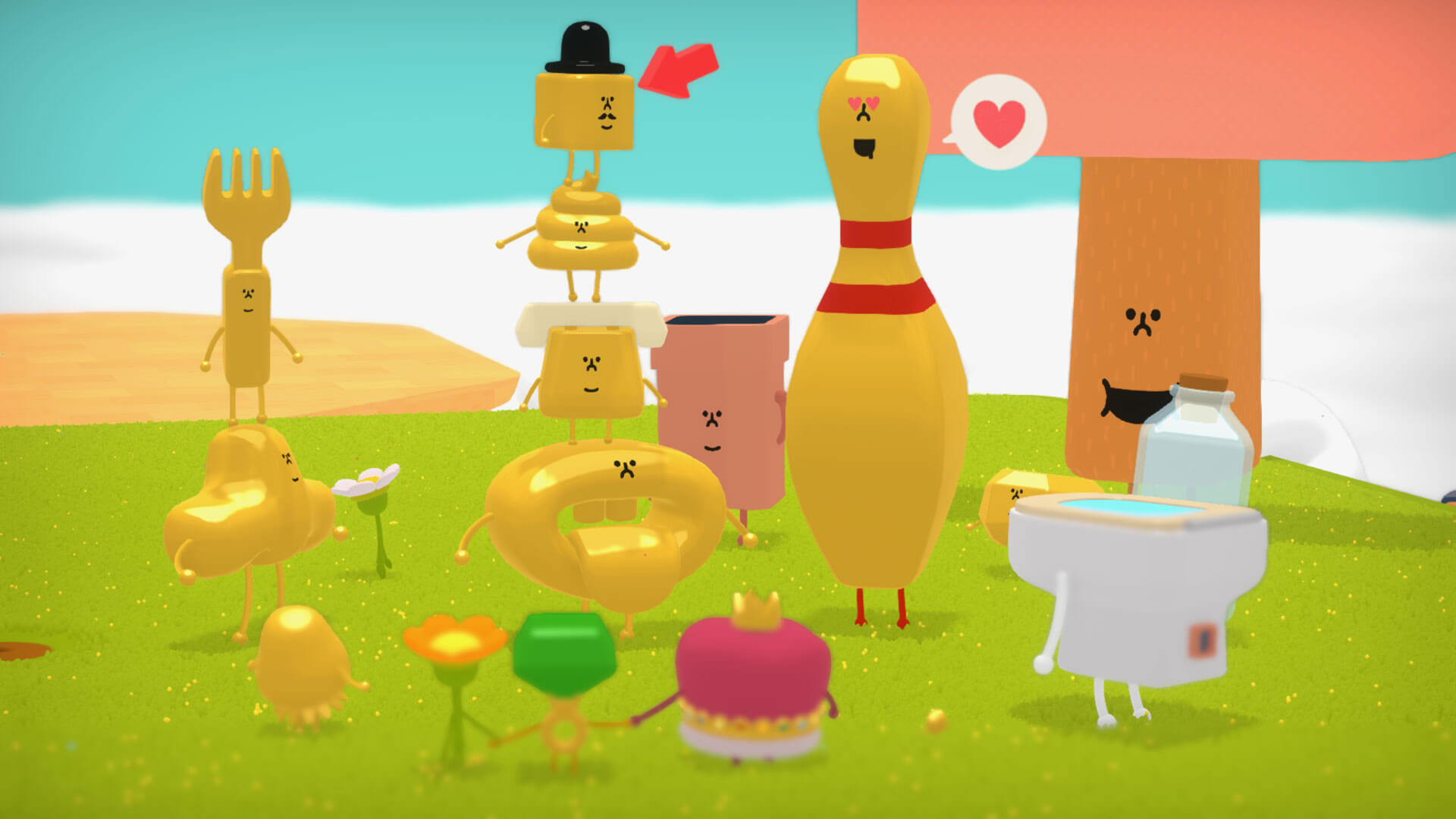 The Mayor has a unique ability as well, and it’s a pure crowd-pleaser.  Under his hat is an exploding present, sending everyone flying on plumes of brightly-colored smoke.  This is quite possibly the single most fun thing the inhabitants of Wattam have ever experienced and a perfect way to turn a new arrival into a friend and have them join the roster.  Most characters bring with them a simple puzzle of some sort, such as circle-dance needed to turn the sprout into a tree and each new activity leads to even more friends.  Some of the new characters are standard-sized while others are huge platforms that latch onto the sides of the plain, and after a fair amount of play, a second little island opens up.

By this point it’s easy to not think about the world starting off dark and lonely, but each of the eventual four islands brings with it a new memory clarifying what went wrong.  Each little moment of story is fairly short, only a minute or so with the longest clocking in at maybe three minutes tops, but together they paint a dark story that focuses on the harm caused by a single angry outburst.  Despite how small a part of Wattam the story is, it ends up being surprisingly effective because of the contrast with the bright, sunny nature of the rest of the game. 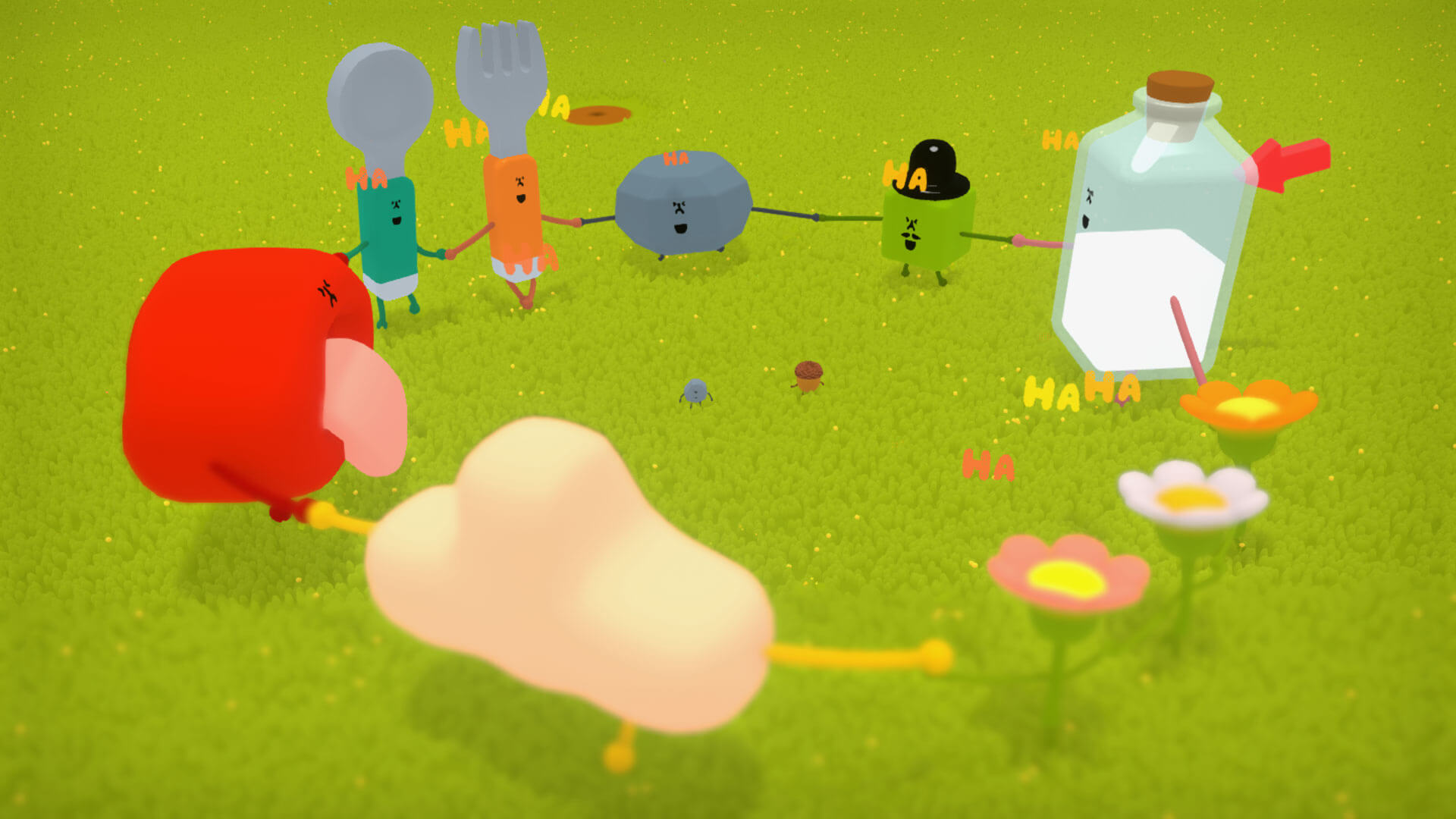 While Wattam can be a little awkward, thanks to replacing its camera stick with the simple rotation controls on the shoulder buttons, and easily beaten in three hours, it’s a game that makes a strong statement that sticks in the mind.  It’s easy to go from one task to another, quickly repopulating the world, but while this is happening the various restored objects are all running around in the background, playing together, having fun and inviting you to hold up a minute and join in.  Being able to switch from one character to another at any moment means there’s always something to experiment with, whether that be washing everything to a shiny gold in the toilet, blowing things around with the fan or mowing pictures in the grass.  It would be nice if the AI was smart enough to do multiplayer, engaging in a nice game of frisbee with a flung flower-hat, though.  What Wattam does successfully is reinforce the idea of play, that doing silly things is fun and doing them with friends is even better.  Wattam remembers that child-like is very different from childish, and that carefree play should be as important to a grown-up adult as it was back before we all began taking things so seriously.