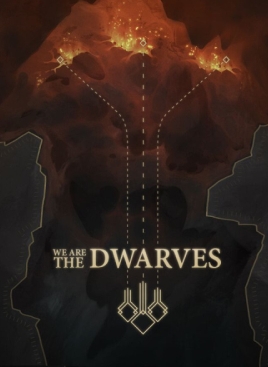 We Are The Dwarves

Ever since becoming a gaming journalist, I’ve felt like I should use this opportunity to branch out into exposing myself a bit to the types of games I don’t casually play often, but have still shown an interest in. Case in point, a real-time tactical strategy/action game hybrid such as We Are The Dwarves. After all, what kind of game would be a better entry point to the genre than one featuring dwarven astronauts, of all things? As I began the game, marched on ahead, and then died in the first two minutes after a mere two hits from the very first enemy, I realized the answer: lots of games.

The setup is particularly simple, as three dwarves by the name of Forcer, Smashfist and Shadow set out on a journey to find a new star in the stone universe in order to save their race. As expected, though, things go south rather quickly, and the three have to reassemble their group in order to advance and hopefully avoid extinction. We Are The Dwarves starts out on the right foot, quickly immersing you in some amazing visuals and scenery that feel like a perfect blend of both fantasy and science fiction. Otherworldly vegetation and creatures lurk around every corner, being not necessarily the most creative lot, but all well-designed and impressive. The sound is also quite nice as well, perfectly fitting the atmosphere of being marooned in a strange new world, but the voice acting of the dwarves…um, not so much. They do get across their story quite nicely with little details throughout, but they always a bit awkward and stilted. Thankfully, they only pipe up mostly during major events. The game also controls fine as well, mixing simple point-and-click movement with an easy-to-use keyboard layout for actions, although having to use the right mouse button to rotate the camera gets slightly awkward during some moments.

Getting back to the scenery, though, the game uses it really well when it comes to strategic maneuvers. Giant sandworms, acid-shooting plants, and more are laid about each stage, and while you have to be careful in avoiding them, they can also be used against enemies as well. In addition, each of the three dwarves has their own unique set of skills that are related to their fortes (gunner, brawler, and assassin), which provides you with several means of taking out enemies, allowing for a nice variety of combat options…which the game will almost discourage, oddly enough. 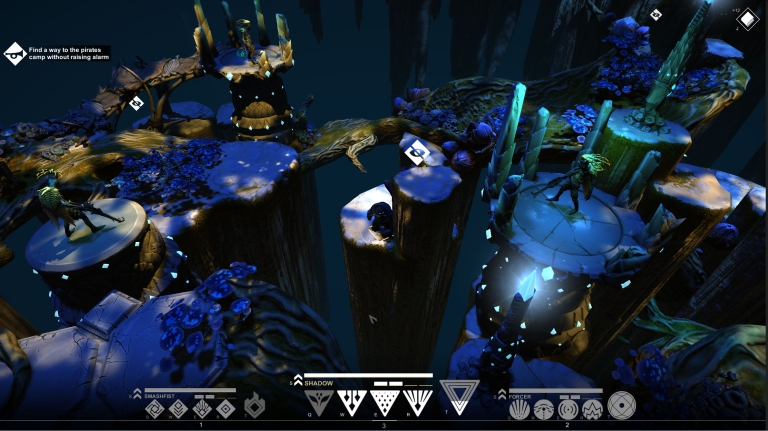 See, while We Are The Dwarves is a strategy game, it seems to at least be partially under the illusion that it’s a stealth game, as it keeps encouraging you to try and sneak around enemies as much as possible. Which seems odd, seeing as how the majority of the skills you’re given and can unlock are mainly for combat purposes. The second an enemy notices you, however, you’ll realize why emphasis is made on not going in guns a-blazing: Because enemies will rip you to shreds almost instantly. And it doesn’t help that this is a game seemingly subscribing to the ever-increasingly annoying theory of “Huge hordes of enemies = Substitute for a balanced yet fair challenge.” Pretty much every enemy you encounter in this game either comes in groups of at least four enemies, or immediately alerts a group on enemies when you encounter them, making for an absolute chore. Heck, at one point single shot summoned at least a dozen giant insects, and when that happened I basically just considered giving up and reloading my last saved game due to how much they overwhelmed me.

This could be remedied if the stealth elements were better implemented, but they almost come across as a token addition to the gameplay at best. The twist is that each enemy has three different sensors – sight, smell, and hearing – but in end, it basically just comes down to “try not to get close to them.” And you will get close to them, because several areas seem to be purposely designed around having to run into enemies along the way, thanks to the stages having some questionable level design. Even the moments that explicitly state stealth as a potential goal feel like a chore, because they tend to require either incredibly precise timing, or luck if the enemy doesn’t appear to have a pattern.

But most of the time, you will indeed find yourself being swarmed by too many enemies. Two options either come to mind: either hightail it to a healing point and keep using it over and over, defeating the occasional enemy in between, or make good use of the space bar, which triggers an ability that allows you slow time to a crawl in order to accurately predict your next move. It is a handy feature indeed, but the fact that you’re constantly reliant on it and have to spam it over and over honestly made me question why this even bothered to be a real-time strategy game at points. 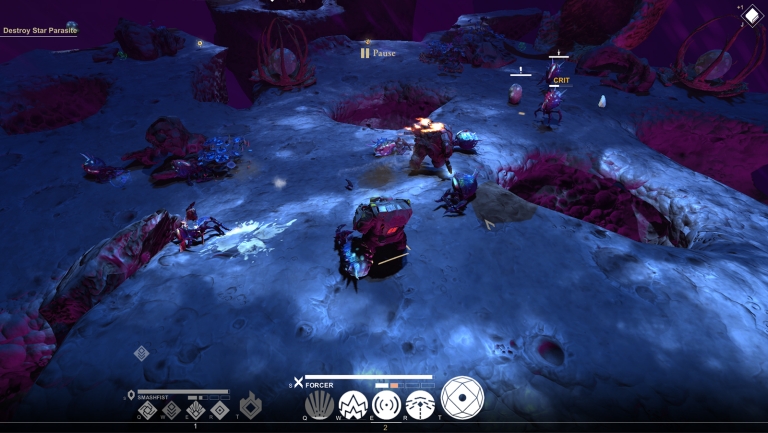 We Are The Dwarves shouldn’t be completely dismissed, as it still at least has some neat ideas, controls nicely and looks pretty, but it comes across being so viciously unfair that it can only be recommended to the most hardcore fans of this genre. I was constantly finding myself too frustrated at the game to enjoy it, but to those willing to invest hours upon hours of seeing dwarves die over and over, knock yourself out.