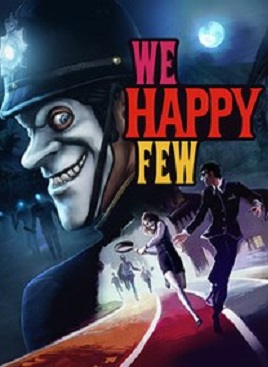 Three years ago, Contrast developer Compulsion Games ran a successful Kickstarter for their follow-up title, which was originally set to be a roguelike survival title set in a dystopic version of 1960s Britain. After a memorable appearance at Microsoft’s E3 2016 press conference, Compulsion launched an early access version, and while the unique world drew in plenty of players, the primary focus on survival over storytelling created an unintentional distinction between the game’s marketing and the playable content. As a result, the British developer listened to the fans and worked on building a compelling narrative to compliment the survival and procedural generation elements, transforming the final product from a short replayable experience to a longer title with added layers of depth and intrigue. To add to this unusual development cycle, Microsoft revealed at their most recent E3 press conference that they would be adding Compulsion Games to their lineup of ever-growing first party studios, so their upcoming titles are now guaranteed to have a lot more eyes looking their way, for better or worse. With all of this added pressure, there’s a lot riding on the reception of We Happy Few as it makes its re-debut on Xbox One and PC, and its first launch on PS4. While the world of We Happy Few has become more engaging with this renewed focus on story, the inconsistent writing, formulaic missions and lack of polish holds back this procedurally-generated immersive sim from reaching its full potential.

We Happy Few takes place in an alternate version of 1960s Britain, wherein Germany takes over the country shortly after World War II, leading to the downfall of the fictional island city of Wellington Wells. The inhabitants of Wellington Wells have now become overly reliant on the effects of a drug named Joy, which helps them repress the past and see the world in a more positive light, altering their desolate surroundings into a fully functional world devoid of children or the problematic “Downers” who refuse to take this substance. These illusions are made justifiable thanks to curfews, strict policeman and masks that hide the true feelings of the civilians, but sometimes the memories can overcome these influences, including those of Arthur Hastings, who is jolted back to reality when he remembers what happened to his brother. Now, Arthur must make his way through Wellington Wells by blending in with both the downers and the Joy-addicted, with the help of Sally Boyle, a doctor who maintains an uneasy alliance between the all-powerful General and the Wellies, and Ollie Starkey, a troubled soldier who is conflicted by the actions that led to this current society.

The player will gain the opportunity to play as each of these three characters, with Arthur representing a balance between Sally’s focus on stealth and chemicals, and Ollie’s focus on fighting and explosives. Sally and Ollie’s tales happen concurrently with the primary events caused by Arthur, which makes Compulsion’s decision to tell each of their stories individually a perplexing one, as frequently switching between the characters at key intervals in their tales could have led to more variety within the gameplay, and a more consistently gripping story. As is, while there are intriguing cinematics with mostly solid voice acting, the dialogue ranges from original and enticing to disjointed and nonsensical, which lowers the sense of immersion in a universe that begs to be explored. The world-building is easily the game’s greatest strength, as everything from simple item descriptions to hundreds of lore-filled journal entries building a creepy, shockingly human, humorous and memorable in-game world. 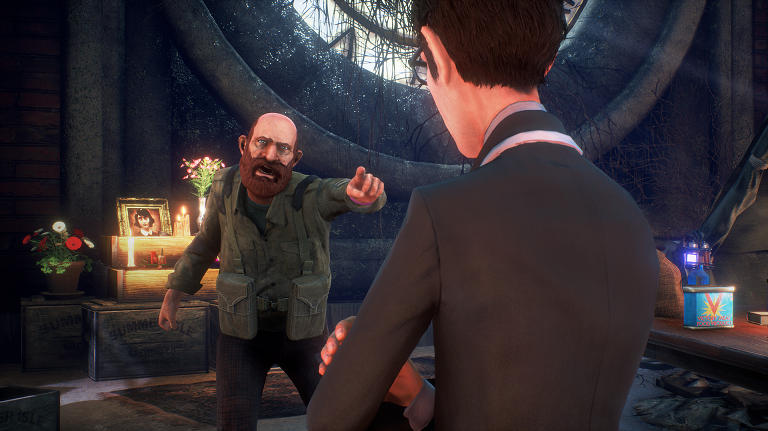 For all the creativity that is shown off within the story and setting, it’s ultimately disappointing that little of that is shown off in the gameplay. Many of the survival elements of the early access version are still present, as factors such as hunger and thirst remain, but cannot result in a player’s death, instead hampering other attributes such as stamina. With the exception of outfits, which can drastically alter how different inhabitants react to your appearance, these meters only serve as a minor distraction to the core immersive sim gameplay, as players scour through trash cans and cupboards to gather every piece of loot imaginable, ranging from health items and weapons to drugs and crafting materials. Despite several instances where the players lose and regain access to their stuff, inventory management is rarely too much of an issue if the player doesn’t hoard anything and everything.

While stealth is always a viable option, and often times a necessary one, the procedurally-generated open stretches of land and designed interiors for the main and side quests both fare poorly, with little room for improvisation when something goes awry, and the equal parts oblivious and overly aggressive AI makes it unpredictable in all the wrong ways. The lack of an ability to re-load within the menus when something does go astray creates some fully avoidable moments of frustration and impatience, as players await and recover from their inevitable deaths. Meanwhile, the combat is all too simplistic, with only one or two additional moves that allow for any sort of strategy or depth beyond attacking and blocking, making the forced sequences of combat during the main story create an instant sense of dread, especially as larger groups are dropped in during later stages of the game. 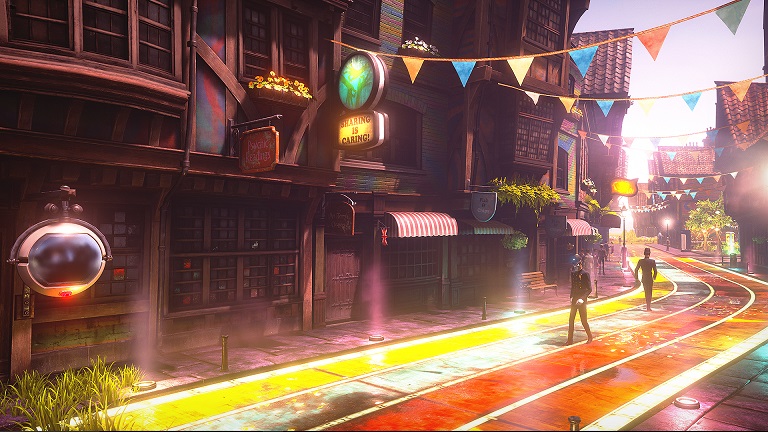 The most upsetting gameplay element is brought about by the procedural generation and how it drastically decreases the sense of stakes and motivation that the story attempts to put forth. We Happy Few is not lacking in content, thanks to a decently-sized campaign, a plethora of mostly simple side quests, memories to rediscover and plenty of buildings to loot. This content, however, is all separated by large stretches of open land and aesthetically similar villages, save for a few highly-populated cities. The random nature of the locations of these side quests and mission objectives certainly adds some replayability, but it also all-too-frequently leads to players being forced to walk across empty stretches of land, with little or no incentive to deviate from the main path if a set piece is not easily spottable along the way. Any sense of pacing created by the story is forced to a screeching halt when a simple fetch quest is dragged out thanks to lengthy and unnecessary stretches of straightforward traversal. There are opportunities for fast travel, but that doesn’t help the environments from feeling drawn out and barren in ways that only serve to ruin all the hard work that the story and lore puts in.

The presentation of We Happy Few is never impressive, but does an adequate job at displaying the eccentricities of Wellington Wells and its inhabitants. While some up-close looks at the NPCs can be rough around the edges, the larger cities and many of the interiors offer a great level of detail that helps amplify Compulsion’s unique vision. The soundtrack does an equally solid job of creating uneasy feelings and tense atmospheres, particularly when the player partakes in Joy and sees the altered reality that impairs those that rely upon it. Unfortunately, some of the shortcuts made to make such an engrossing world can be a little too visible, including the player teleporting to climb barriers and open chests, or NPCs disappearing mid-fight or simply while strolling by. While there were no instances of game-breaking glitches, the near-launch version of the game could still stand to use some additional polish, although it’s nothing that would not be able to be fixed as the game adds additional content in the upcoming months, including a sandbox mode reminiscent of the early access state. 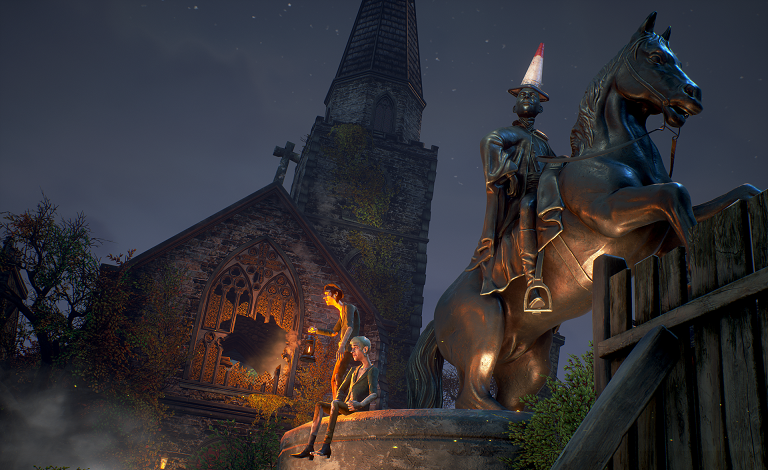 Much like Contrast before it, We Happy Few shows off plenty of potential with its original and engaging world from a team whose passion and heart clearly shines through. Unfortunately, the random nature of the world ultimately hampers this ambition, and is held back further by lackluster stealth and inconsistent dialogue. Compulsion Games’ future is bright, with their acquisition by Microsoft signaling potentially great things for this small but clearly motivated team. As for now, immersive sim fans and players who can look past these issues will find a world worth getting wrapped up in, but you might need to take a Joy pill of your own in order to want to see Arthur’s journey to its conclusion.