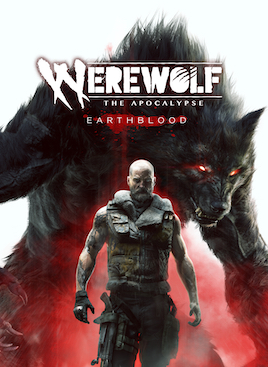 There’s a reason that a sufficient real-time combat system and stealth seldom go hand-in-hand. Or at least come across that they’ve been built up and fleshed out enough that a video game has found the right balance to appease both sides of this particular aisle. There are exceptions to this; games that do just enough to incorporate both styles of play, even if the end result often closes on a one-on-one duel. The point is, it’s hard to argue the case that a game that incorporates stealth, but also has its moments of brutality and confrontation, can so easily be kept apart from one another. It’s so often when they bleed together — when one takes clear precedent over the other — where the problems start to arise. Or worse, when both play-styles feel neither fun nor interesting to dive deeper into. It’s an issue that plagues a far chunk of Werewolf: The Apocalypse – Earthblood‘s run-time and to say that’s just the beginning of its woes should tell you just how disappointingly misguided this latest installment in the Werewolf franchise really is.

Having to usher such a mouthful of a name is a tad off-putting, if not entirely damaging, in its own right. But to see the kind of game a branch of the World of Darkness series (the same series that Vampire: The Masquerade stems from) has been stapled to here is more than confusing and can often egregiously feel like little more than a veil to what is an otherwise mindlessly bog-standard, third-person attempt at combat that may have felt right at home during the days of the PS2. The quality of some of Earthblood‘s cinematics and CGI doesn’t help with such a comparison; it’s not quite last year’s XIII remake levels of bad, but the compressed look, lack of post-production polish and at points awkward snap-back cuts to gameplay is hard to ignore.

It might’ve been bearable had Earthblood‘s tale been anymore interesting than it actually is. Alas, not only does the well of potential go to waste here, but as the introductory cutscenes portray, Earthblood veers in a more (dare I say) politically-environmental direction. And not one that at least comes across as willingly self-contained or nuanced in its portrayal of what are clearly the objectively “good” and “bad” sides in this tale. Which here amounts to little more than: humans are polluting the world, evil company — in this case, the Endron Corporation — is being evil doing evil things and you, the player-character Cahal, are an eco-terrorist Garou. The mythical and supernatural implications just sort of worm their way in somehow. This set-up might not be as eye-rolling as it sounds had the game fleshed its themes out or done anything beyond one-dimensional villainy and cliched personal struggles alike. 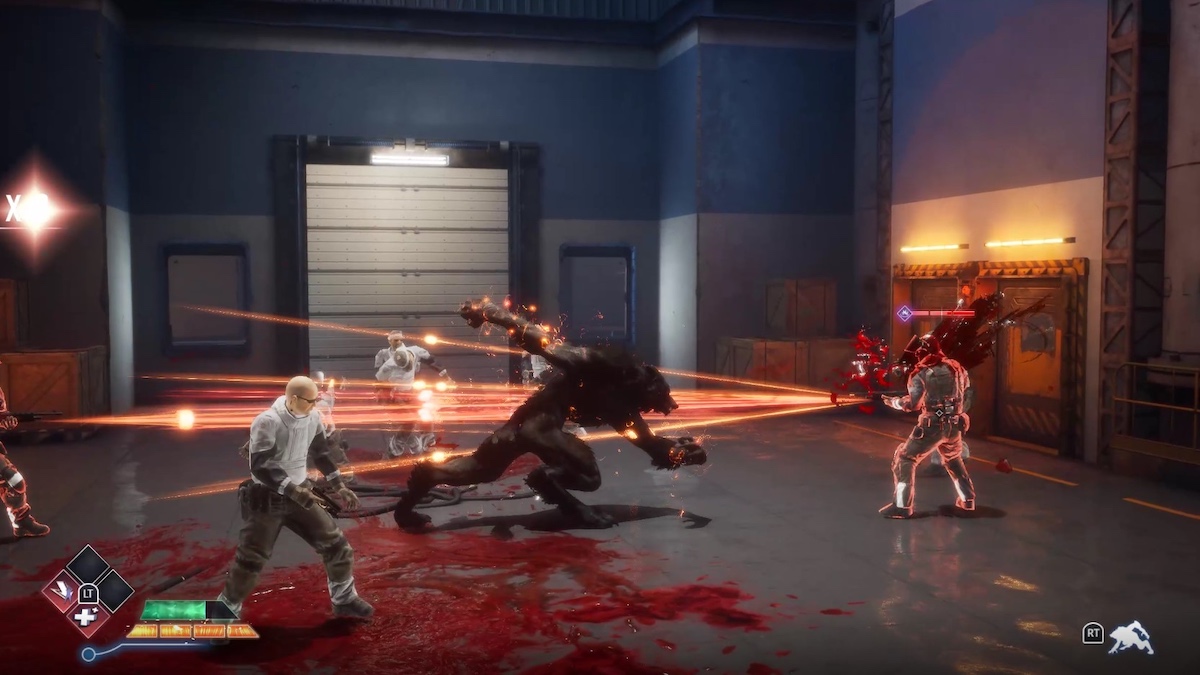 Instead, just as the game begins with evidently on-the-nose exposition, the very brand of Werewolf feels increasingly more like a placeholder. A placeholder to something that, even on its own, can’t stand on its own two (or even four) legs. The good news is that a lot of Earthblood‘s preaching is unloaded on the player in the first few hours. Had this been the end of it, one could’ve perhaps come away from the game frustrated with such an introduction, but satisfied more over with what succeeded it. The bad news is that the feeling of a placeholder — that Werewolf: The Apocalypse is but a name to market, as opposed to one utilized with a unique gameplay loop — extends beyond just the woeful narrative. The main problem with Earthblood‘s set-up is its requirement to appease both sides at once. Those who may want to stealth their way through each of the industrial-styled environments, but also those who just want to get things over and done with by hitting the Enrage prompt and triggering combat.

Again, this might not be that big an issue had either of these play-styles felt in anyway fleshed out or enjoyable to use. Though the game’s interpretation of stealth is your standard affair of crouching, hiding behind chest-level cover and taking enemies out from behind — with a wolf transformation gimmick that, bizarrely enough, doesn’t add anything to the formula — combat is another story entirely. It’s not enough that camera work is erratic and hard to fathom whether it’s working with or intentionally against you. Nor is it enough that attacks lack any semblance of weight or impact against what are damage-sponge enemies of varying sizes and health-bar widths. But the fact Earthblood is not even that satisfying to control or even attempt to master. Sure there are moves to unlock and work towards through the acquisition of upgrade points. Glimpses too with that same mindless depth of simply painting a room in many a foe’s blood. Yet a glimpse is all it ever is, as combat rarely, if ever, feels fluid, responsive or tactical. Simply mashing attack buttons and sprinting about a space is often sufficient enough an effort. 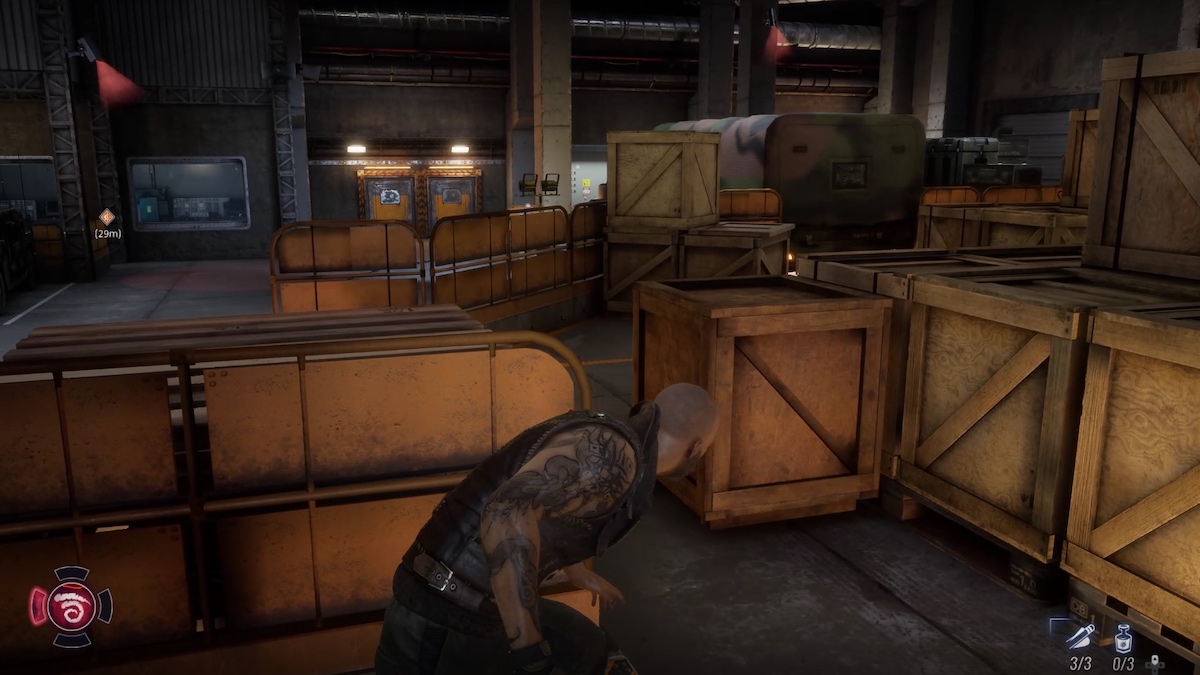 The mechanics of combat are all over the place — moves take too long to charge up, evasion often fails to register. And given the franticness of most encounters, even something as simple as dodging projectiles or area-of-effect strikes are more cumbersome than they have any right to be. What’s worse is that the game at points even seems to drop the pretense entirely. That this is in anyway an experience where players can choose if they want to sneak or let loose. Some segments forcing you into fights despite your best attempts to remain hidden. Not least when you go out of your way to disable a many number of doors that provide enemy reinforcements…and the doors somehow still work. A player going along with the rule-set only for the game to throw those same conventions right out the window. That’s excluding the mandatory “clear area of enemies” missions often duplicated across a greater breadth of a given map. Had said maps and the very level design been as dire an output, Earthblood‘s failings might’ve wound up universal across the board.

Admittedly though, some credit must be shown for the way particular missions require you weaving in, out, back and forth throughout a given location. It’s not particularly complex or brimming with visual storytelling that may spark added investment. It doesn’t hold a candle to anything remotely resembling a studio like From Software or Arkane Studios on that front. But like its combat, there’s a morsel of good favor to share here. It would’ve been much easier for the game to just have its players escorted from one set level to the next; instead the game does at least attempt to wrap this all around a connected world. A main hub of sorts with which required missions and story settings are nestled in the far corners of the game world. Hard to believe it may be that all of the vital locations are just so conveniently dotted near one another, to suspend one’s disbelief for a moment, there’s consolation to remark that Earthblood does make traversing these spots of open space a touch enjoyable. A significant step-up when compared to a game like Disintegration for example. A game whose own moments to explore an environment felt like nothing more than a blatant attempt at padding for padding’s sake. 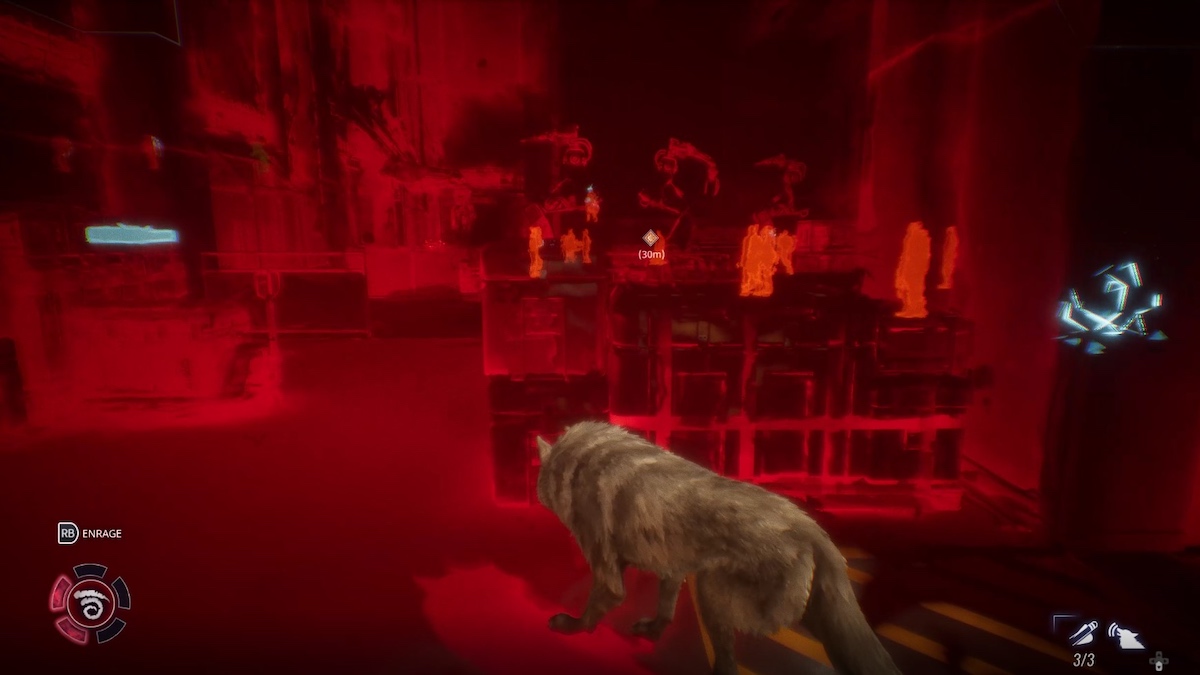 It’s just a shame that, as noted, a vast portion of Earthblood‘s layout and structure feels shackled to that same mandatory quota of combat. What you end up with are a series of rigid, right-angled rooms with objects arranged in such a way that even stealth feels like an after-thought. Blatant points where chest-high cover meets at a conveniently-poised right-angle, or an enemy’s patrol route stops at just the right angle. The obviousness of such a set-up then takes a lot away from the satisfaction of working it out for one’s self and it can often feel a little too sterilized and safe an approach. That’s not to say that the old-fashioned approach to stealth can’t be handled better. Not least when we’re talking about a character that can transform into a wolf. Think back to a game like Aragami, the 2016 call-back to stealth of yonder by developer Lince Works. With its shadow-manipulation mechanics and risk of an instant-death if discovered.

There are ways and means you can make the most of such limitations yet Earthblood does little, if anything, with its source material. Each square room or over-sized area that’s so clearly set up for a fight plays out in pretty much the same way. It matters not if you’re an expert at stealth, get accidentally spotted at every turn or simply don’t care. At one point or another, Earthblood simply funnels each kind of player into the exact same bottleneck. There’s no cost or consequence to failure on top. Trigger an alarm and all that does is prolong things, rather than add even more challenge on top. In hindsight, even the general inclusion of stealth feels like a pointless exercise in prolonging. Why wouldn’t you just run head-first into a new room, transform into a wolf and kill everyone in sight? As opposed to taking the longer route and hopefully knocking the required number out. The fact some objective markers at times are, again, oh so conveniently placed on enemy types that can’t simply be knocked out, but must be fought. 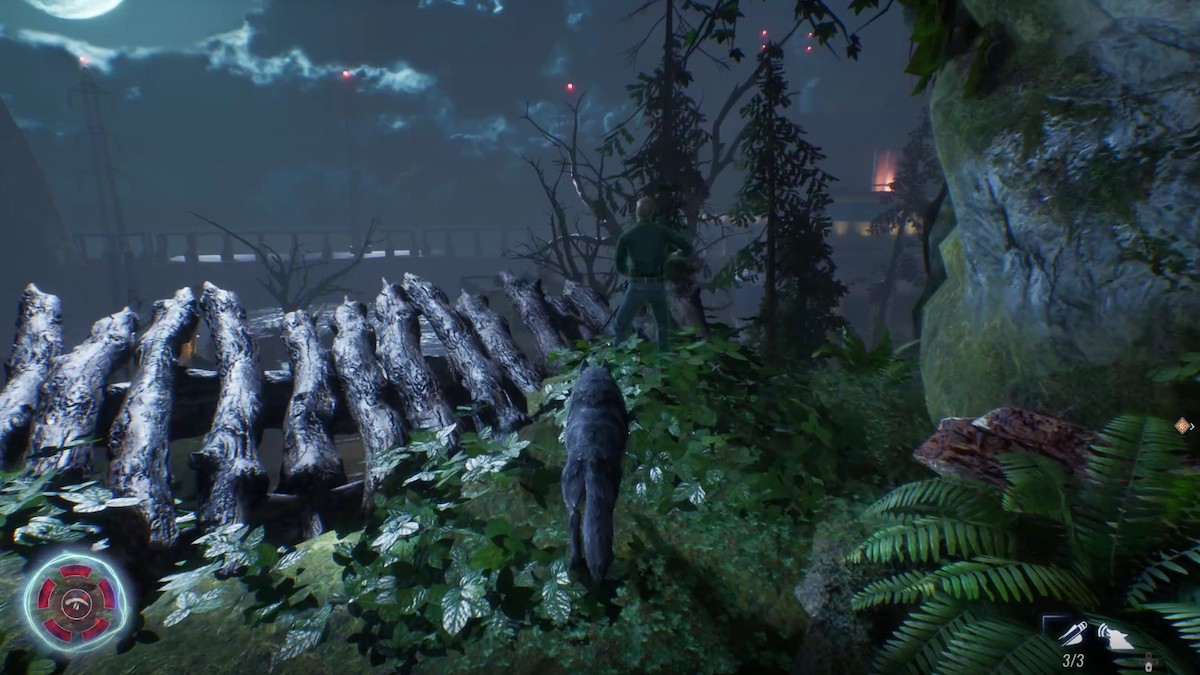 In a game that bills itself as a choice between stealth and combat, it doesn’t take long for the deceit to reveal itself and you realize this is ill-suited and insufficiently-handled for either one of the two gameplay styles. Gameplay styles it’s hoping to fill the void left by an amateurish narrative with just-as-amateurish an attempt to inject unnecessary subject matter. If the opening sections rambling about human ways don’t annoy, the over-abundance of chopped-down trees — and lest we forget, a seeming avoidance of anything more fittingly resembling Werewolf fantasy — littering the environment will. There’s commendation to show with its brief spells of level design, not least an attempt at setting the game predominantly around a connected hub. A fleeting handful of positives to share, for Werewolf: The Apocalypse – Earthblood is a predominantly dull and tonally-misguided addition to the World of Darkness property.