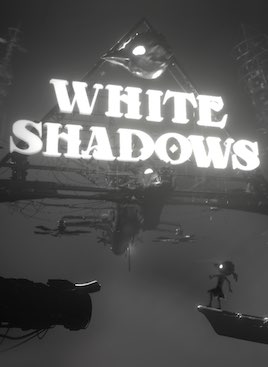 In a way, you’ve got to give it to developer Monkel in being immediately upfront with their inspirations behind their debut game, White Shadows. It doesn’t take a literary bookworm to see the words “All animals are equal” in the opening passages and know exactly which specific tale — and further to that, which specific writer — the game is leaning heavily on for its premise. But for anyone who has dabbled in these kinds of 2.5D platformers in recent past — especially those aiming to evoke and potentially provoke with such “oppressive” settings — it’s not exactly a new sensation. Much like the even more niche “child lost in a bleak world” microgenre we have Playdead to thank for sparking, it’s a template we’ve gotten used to. One that in the past decade hasn’t evolved beyond stark imagery and vague implications of what exactly is going on in these environmentally-focused tales. There have been outliers in the wake of both Limbo and Inside‘s monumental success, but seldom has that acclaim been matched by studios that have aimed to do what Playdead managed not once, but twice to create.

Because for all the restricted colors and feeling of unease, those games’ resonance was about more than just visualizing a devoid world. It was that uncertainty, that suggestion towards something far stranger and bleaker than you’d thus far learned (or assumed you’d learned). But those games never spelt it out to the player (for better or worse); their narrative truths are still debated to this day. Call it whatever manner of word you want, derogatory or not, but Playdead’s modus operandi was about more than just “bleak world is bleak.” One can’t look at the physics-heavy feel of controls, the block-pushing or the perilous set-pieces and not think of these games. White Shadows has done its homework — reminding us of past and in some cases better works on a near minute-by-minute basis. But while imitation may be the sincerest form of flattery, what good does that do if you have nothing original — or at least as involved with its world-building — to say on top? It’s for this reason, on top of a few others, why White Shadows doesn’t so much stumble as it essentially fizzles out on a whimper.

Throughout the four to five run-time — of which includes a fair few moments of wrestling all pacing away from the player in favor of some thematic presentation — you play as a character referred to as Beakgirl. A bird-like humanoid whom we first see escaping from the confines of, like the world around it, something that would fit right at home in most retro-futurist/dieselpunk aesthetics of pulp sci-fi. The click-clock-clunk rotary of machinery and age-old technology is the order of play here, complimented by an overseer of grainy, black-and-white color that also pays homage to early 20th century motion pictures. On paper it’s an enticing if not entirely unique balancing act to see unravel — not least one that wants to retain the familiarity of a platformer with simplified, easy-to-grasp controls. Controls that at their most complex have you escaping tense stealth segments all while timing one’s movement correctly so as to get past the next obstacle and “escape” said precarious moments. In execution though, this mix of a [at this point in time] decade-old puzzle-platforming template and exerted sampling of all-too-familiar classical suites doesn’t quite work. 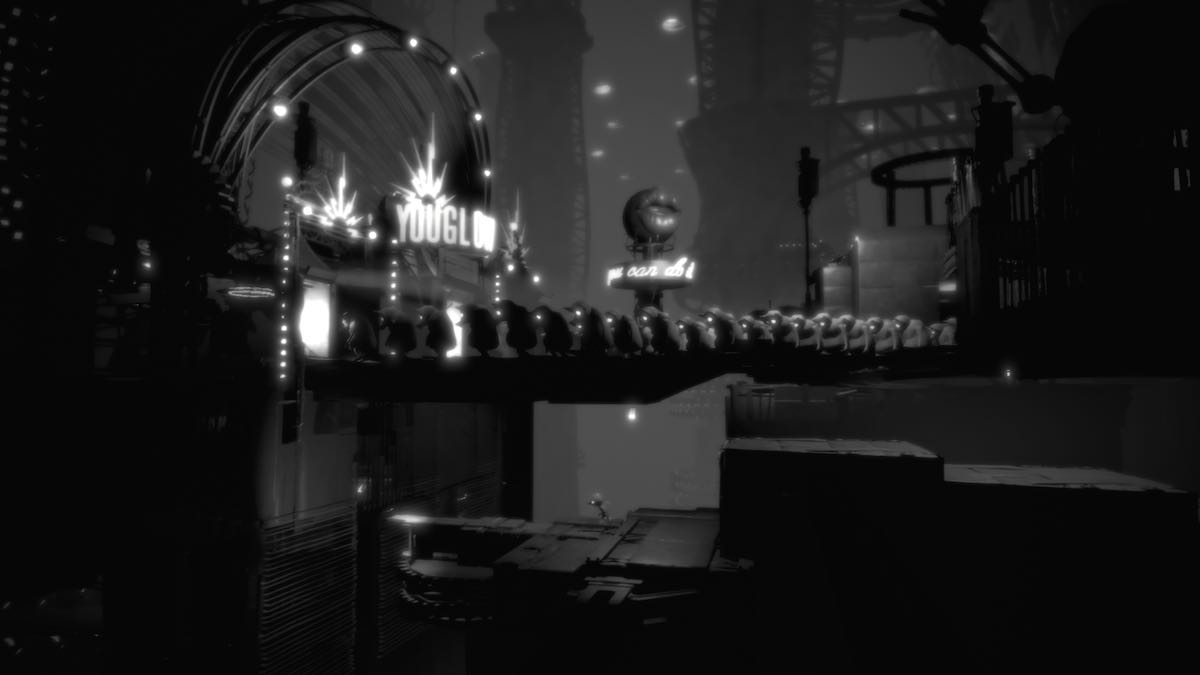 In fact, the music choice in White Shadows is a highlight, but perhaps not in the way the developers were intending. It’s one thing to have that piece we’ve heard a million times in media show up again here, it’s another to make it work in a way that doesn’t feel tonally disjointed or at the very least, abrupt. Worse, the looping nature of some tracks (similarly recognizable with their go-to popularity) in tandem with the awkward cycling of animations can at times work against the mood the game is aiming to set during these wide-angle stretches where backdrop and environmental storytelling is so clearly the focus. To reiterate: the issue isn’t that this choice of music and scene-setting is being utilized, it’s that White Shadows‘ implementation is too wonky and tonally uneven in this regard. It’s never clear if the intended delivery is satirical, humorous (even if in the blackest of sense) or trying as hard as it can to drill home the oppressive nature of its setting it unravels through foreground and background detail alike. It also doesn’t help that some of these left-field interjections happen mid-way during gameplay — a couple of instances where the game will smash-cut to an animation. An implied piece of propaganda by this game world’s authoritative group; aiding in fleshing out the world, but not all that meaningful in the long-term.

That failure is as prominent because as noted, White Shadows‘ gameplay and sequencing of events is cookie-cutter by comparison. Puzzles that require you pushing boxes to particular points. Using said objects to stay out of the light and away from detection from cone-visioned threats. Segments that have you carefully weaving in and out of would-be safe zones to avoid an incoming obstacle that can instantly kill you. It’s bad enough that the game remains vague on how high you can be before a fall triggers another death, but if you’ve played any one of these similar types of games, the sequences will quickly feel all too familiar. That’s not to say they’re bad by any stretch, but aside from your standard lever-pulling and working out the required order to activate certain devices, little you could consider unique stands out here. There’s simply not enough ideas in general in the puzzle department — let alone stand-out ones — and that’s even for a game as short as White Shadows is. 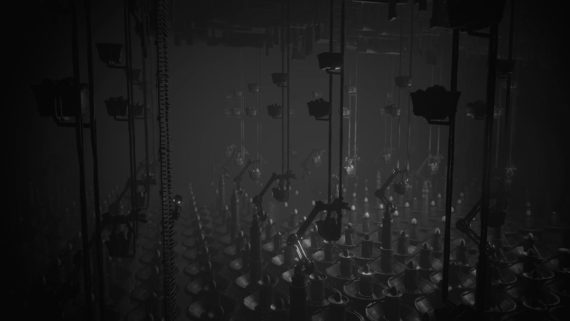 The only real saving grace potentially present in White Shadows is its story and what kind of end point its short run-time is heading towards. An optimistic conclusion, an even bleaker one or perhaps something more bittersweet. To the game’s credit, it’s hard to tell how the end point will manifest during its climax. For all its long-winded stretches of wrestling away player control, White Shadows does keep things tucked away until its final quarter. But as noted, for everything else the game isn’t the most subtle when it comes to the tone it’s wanting to paint, with one too many on-the-nose visuals and references that make you feel like the setting is nothing more than the latest of many pieces of media with a rather shallow and uninspired interpretation of a “dystopian” premise. It says something when the use of glare and bloom for lighting may end up being one of the notable aesthetic touches, and while that in another instance may seem like a detriment, for a game as devoid as this, you can’t help but look for something substantial to cling onto.

Because even at its most supposedly emotional moments so far as turning points in the narrative, the technical side of White Shadows sadly pulls you out from what tiny amount of engagement there is to begin with. Characters in the foreground/background flickering in and out as you progress; there’s even one scene — the game would likely argue is the turning point — where another character’s arm clips through your own. Bad enough that what the game is trying to express isn’t all that special, but it becomes a more frustrating when follies such as this spring up from time to time. I suppose it might’ve been even more damaging had the ending thereafter not been as vague or as anti-climactic as it was. A sequence that feels like it’s attempting some sort of subversion or twist to the narrative, but ends up delivering something that’s both confusing and wholly unsatisfying. A pay-off the game barely feels like it’s put sufficient effort towards building. So convinced that I’d triggered some poorly-explained “bad” ending, I went back and repeated the final segments to find that no, that was the ending. An abrupt finale to a presentation veering too dangerously close to feeling pompous. 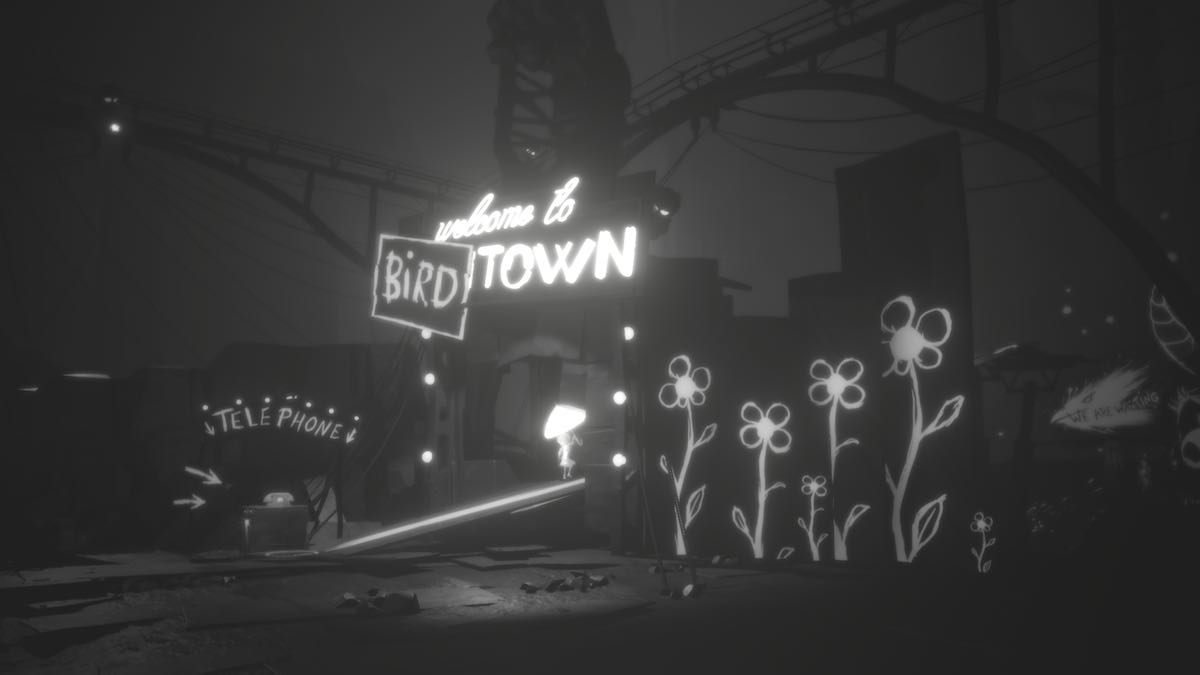 The amount of criticism dished out here may paint a negative picture, but White Shadows is by no means a terrible product and so evidently houses a clear visual style and competent-enough execution of puzzle-platforming. Yet for how little it attempts to break from tired conventions or do anything that doesn’t border on aggravating with its pacing, it’s what the game doesn’t do where most of one’s response will likely linger. Maybe the conclusion that it’s all too ordinary and forgettable is bizarrely what is most poignant. That little is offered in the other direction that’s in anyway damaging to the experience or worthy of ridicule, yet neither does anything warrant an expression any better than a figurative shrugging of the shoulders. In the end White Shadows, in all its many off-kilter interspersing of music pieces, plays things safe. A fine, if by-the-numbers entrant whose uninspired delivery we’ve all found ourselves tiredly accustomed to.