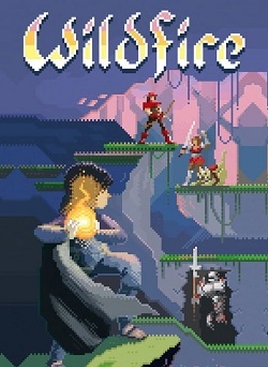 Fire isn’t exactly something that springs to mind when you think of stealth games. After all, it’s blazing bright, which enemies tend to notice, and it’s more of a loud destructive force, while this is a genre that demands quiet. But the minds at Sneaky Bastards have been working on a way to create fire-based stealth gameplay and the result of that is Wildfire. A retro-styled platforming adventure about channeling fire and other elements, it stands out upon first glance, seemingly offering something different. But is this a blazing inferno of passion or merely a weak match that gets snuffed out and forgotten instantly?

Set in a world where magic is outlawed, the game sees you as a simple villager in a happy, peaceful town that surely won’t be ruined soon. But then a rare meteor strikes, and while investigating it, you suddenly gain the power to channel fire and other elements, gathering it into a ball that can be thrown around. Unfortunately, the moment you get these skills is the moment the army of the evil Arch Duchess decides to burn your village down looking for it, branding you as a witch in the process. After escaping a stake-burning, it’s now up to you to traverse the various lands, rescue the villagers, learn more about these new powers and get revenge on the Arch Duchess.

The first thing that will likely leap out when it comes to Wildfire is that the fires look gorgeous. That shouldn’t be surprising for a game built around controlling fire, but it still needs to be stated. The way they wave around fluidly, the pillars of smoke, the heat radiating from them, distorting the air…gorgeous. It does look odd with the more NES-era sprites wandering alongside them and the more detailed backgrounds, but it still shows that there are truly stunning sights here that push things to the limit. Maybe they push it to the limit a little too much, though. 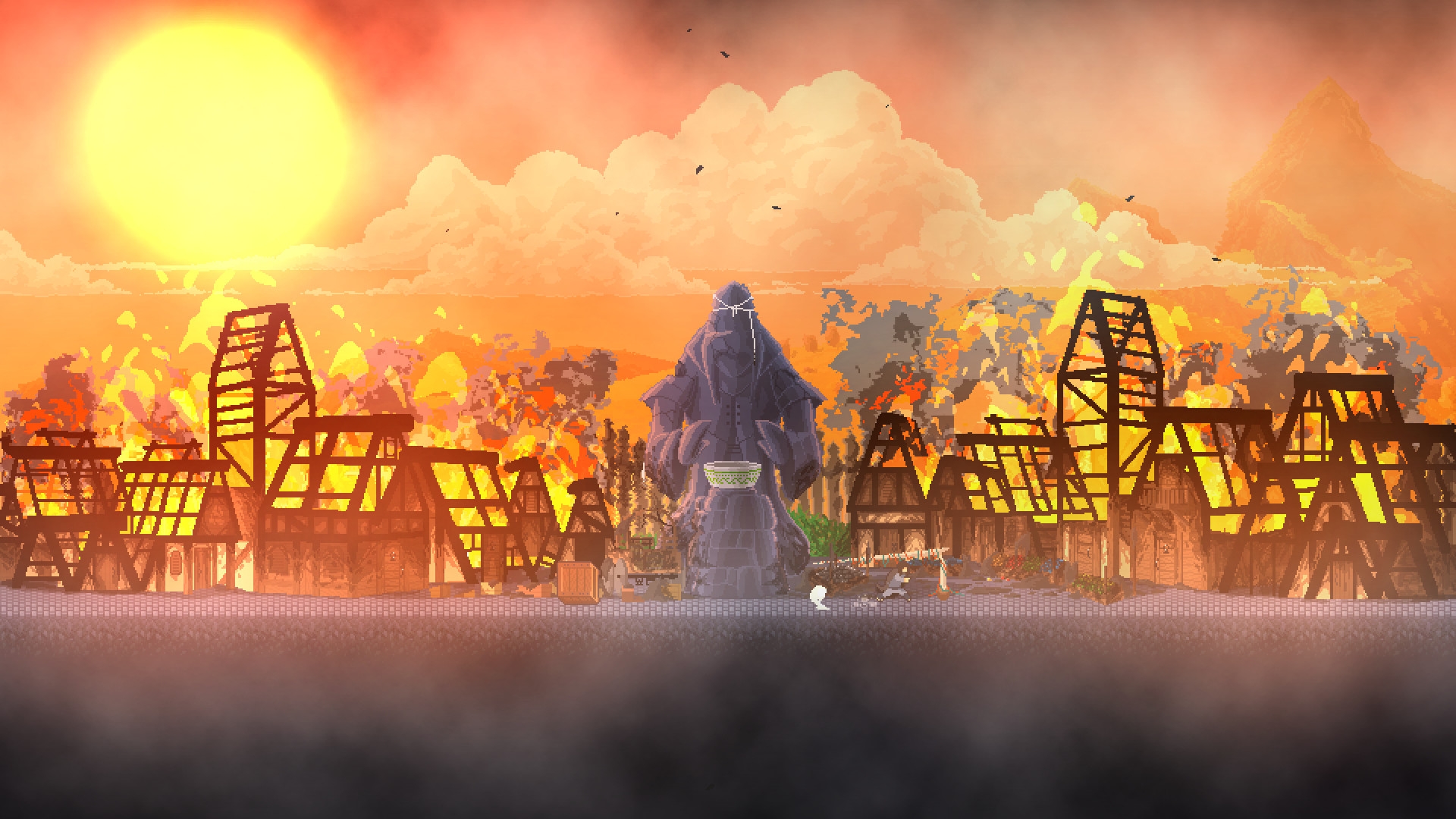 Unfortunately, my first few moments with Wildfire were plagued by horrible lag, and it wasn’t until I had disabled a few graphical settings that I was able to get the game into a (mostly) proper state. And apparently, going by various discussions, others have this issue as well, even those with top-of-the-line computers. You honestly wouldn’t believe that this is the game that gives your graphics card a workout just by looking at it, but apparently all the little details demand a lot. I’m not certain if the Switch version of the game runs better, but it feels like it might be the better option for those unsure of their computer’s settings.

But of course, graphical prowess isn’t necessarily that important for a game such as this. Wildfire is primarily a stealth game, after all, so what matters is if it can pull off successful stealth. And as it turns out, it can indeed pull off stealth extremely well. Typically, each level has the simple goal of either reaching the exit or rescuing villagers by bringing them to checkpoints, though you are given more unique, meatier challenges, like having to return skeletal remains to coffins or race a fuse to a demolition. Of course, how you accomplish these goals is largely up to the player. Levels are nice and open, typically with a lot of different routes to take overall. So whether you try to scorch enemies to death or slip by them unnoticed, there’s a nice amount of options and a variety of gameplay.

It also helps that you’re given a ton of skills to unlock and work with. You start out being able to harness fire, before moving on to water and earth as well (no air, though). This creates tons of tactical maneuvers to try out, such as flinging earth to create cover, creating water bubbles to jump in and use to float up to new levels, crafting smoke bombs from flames to stun enemies and many more. You also get to upgrade them for even more boosts or collect hidden meteor fragments in each level to grant passive abilities, of which you have three slots for. This allows for an extra bit of strategy as well as you try and figure out the best loadout between levels or at checkpoints. 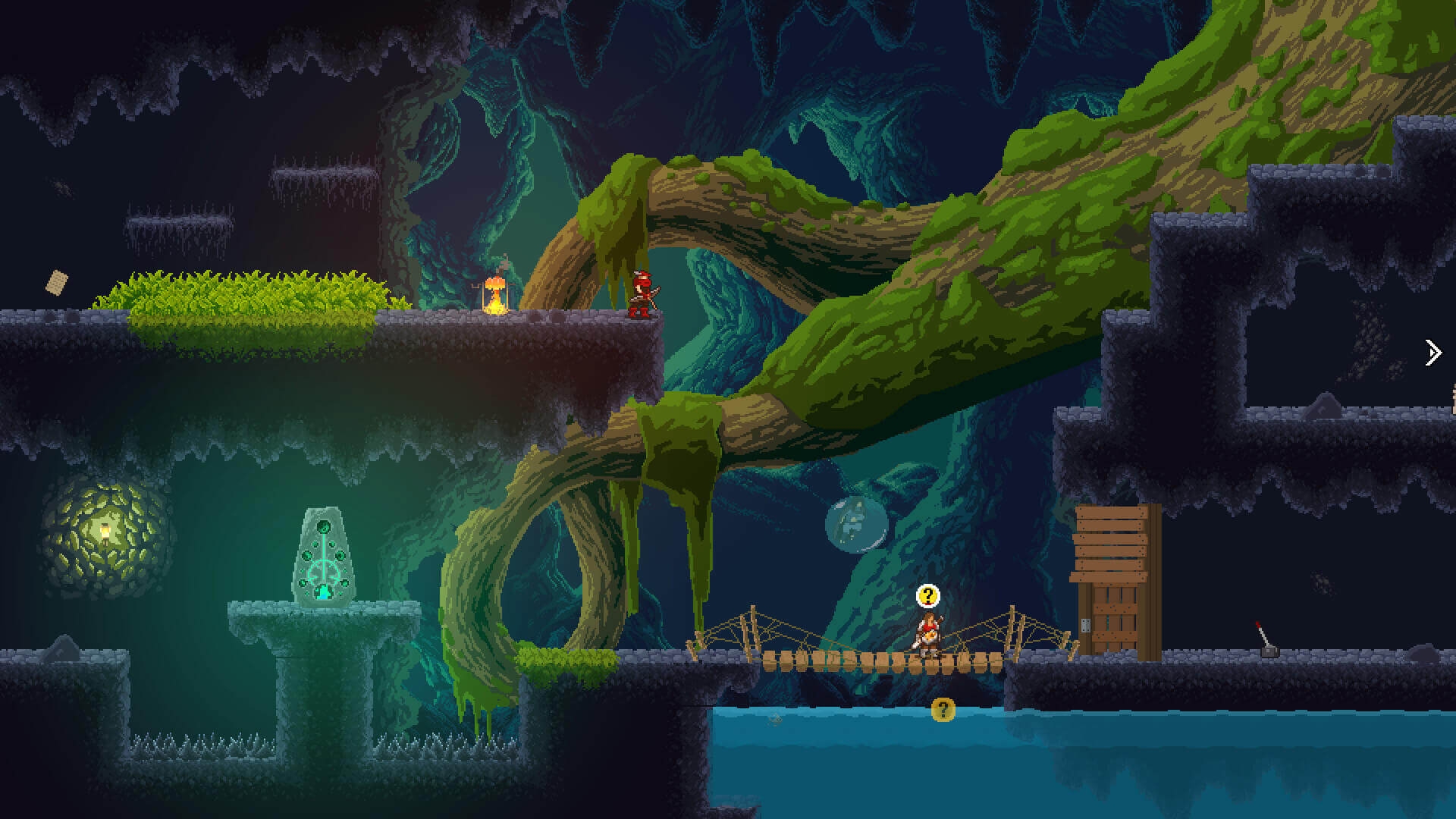 Said upgrades don’t come cheap, though. You have skill points in general that you can earn, through traditional routes such as completing a level undetected, not killing any guards, rescuing villagers or completing optional objectives that range from simple (eavesdrop on conversations) to hard (burn all the vegetation in a single level). The elemental skill points, though, are trickier. You have to take one of the three elements and throw it into an offering at a shrine, which may sound simple at first, but carrying an elemental ball means that you can’t hide or sprint (which goes for carrying any object, like a fellow villager), raising the challenge.

Raising things even further is that fire, your strongest weapon and the one used to achieve several goals, tends to be a finite resource outside of any checkpoints you activate. So puzzle elements come into play as you’re often faced with the challenge of trying to figure out the best route needed when carrying point A to point B. It’ll be douse if you go through the waterfall, but maybe if you throw the fire above and set the grass on fire, you can run through the falls, up and around and reach the burning grass in time to get some fire again. After all, you’ll need it to free restraints on villagers to get them to the exit (and whom control nicely, easily following commands). It’s clever little bit of resource management that that another unique touch to Wildfire.

Ironically, the more traditional stealth elements found in Wildfire are rather basic. You have tall grass and similar areas to hide in as enemies pass by, you can whistle to lure enemies over, running creates sound they’ll notice, don’t get in their sight, confusion meters above heads, etc. It’s all still executed well, but it says a lot that you need things to go off the rails at times in order to get the most enjoyment of the game. Not helped by the AI that doesn’t put up a hefty search, or even if you’re caught, won’t make a massive effort to try and catch you early on, with a lot of them having limitations (armor just make for good jumping, of course). So you can get a really good and unique stealth game here, but you’ll have to be a bit unorthodox in order to do so. 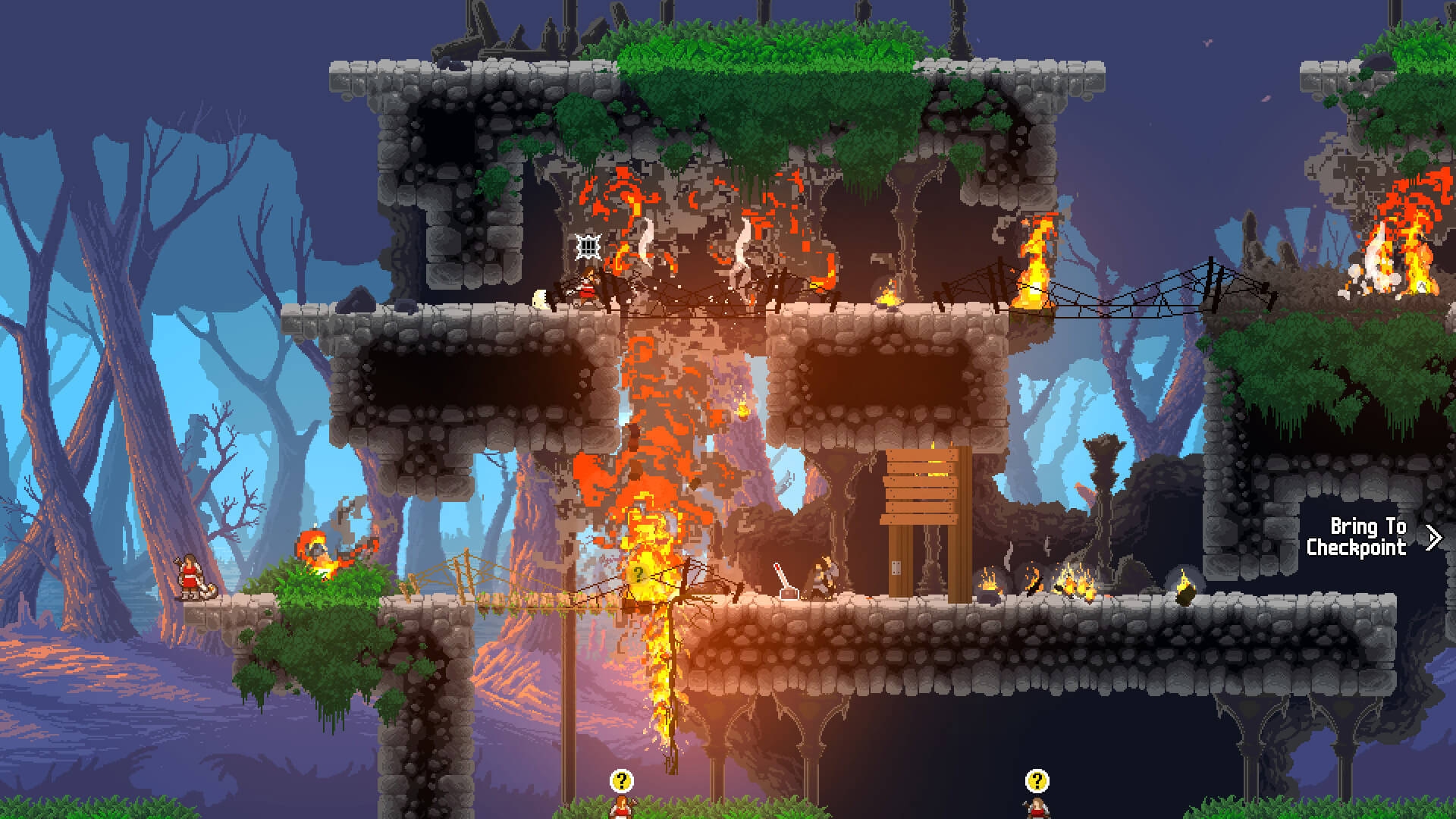 Thanks to impressive level design, a nice range of cool abilities to try out and a spark of something truly unique (pun semi-intended), Wildfire succeeds at delivering a great stealth experience, even if it can be demanding at times. The controls are top-notch, the gameplay is simple to learn yet nicely tricky to master, and the numerous optional objectives provide a decent dose of replayability (definitely one for speedrunners). For those wanting something new in the genre, Wildfire has nice and crispy tricks up its sleeve.