Just by taking a glance at Wolfstride, various bits of popular anime likely spring to mind, be it the style and characters one might find in Cowboy Bebop, or the giant mech action one might find in a Gundam series. It just goes to show how devoted developers OTA IMON Studios are when it comes to capturing that kind of feel in every aspect of their new mech combat RPG. In this critic’s case, however, they weren’t reminded just of the various anime that Wolfstride draws influences from, being also reminded of another indie title released this year, The Wild at Heart. Both of them are gorgeous games dripping with style, have great stories and interesting worlds filled with lovable characters, and a fun, enjoyable, clever gameplay mechanic at the center of things, but unfortunately they have trouble finding the pacing and mechanics needed to properly string all of those positives together.

Wolfstride centers around the motley crew of ex-Yakuza member Shade, excited mech pilot Knife, grizzled dog-person and mechanic Duque, a teenager and past friend of Shade known as Neb, and Peepoo, the robot coach with quite the mouth on them…well, if they weren’t forced to be censored. After the death of their friend G.W., the group inherits the giant mech they had known as COWBOY, and needing to pay off some debts, decide to get into the world of professional mech fighting. What follows is a story that unfolds day by day over two months, with our protagonists trying to climb the rankings as fast as they can and dealing with their own personal issues in between.

While the overall story in Wolfstride is well-told, being revealed to us piece by piece over time through casual conversations and narrations past and present and containing a lot of good dramatic bits and nice dialogue, it succeeds largely thanks to its stellar cast. Be it Shade’s seemingly laid-back and confident attitude, Knife’s eagerness and excitement to get right back into the ring even after massive explosions, or any of the supporting cast that range from a boisterous pig-man who runs the junkyard to the various cocky attitudes of your opponents, a ton of personality is given to all of the inhabitants of Rain City, helped out further by stellar voice acting as well. 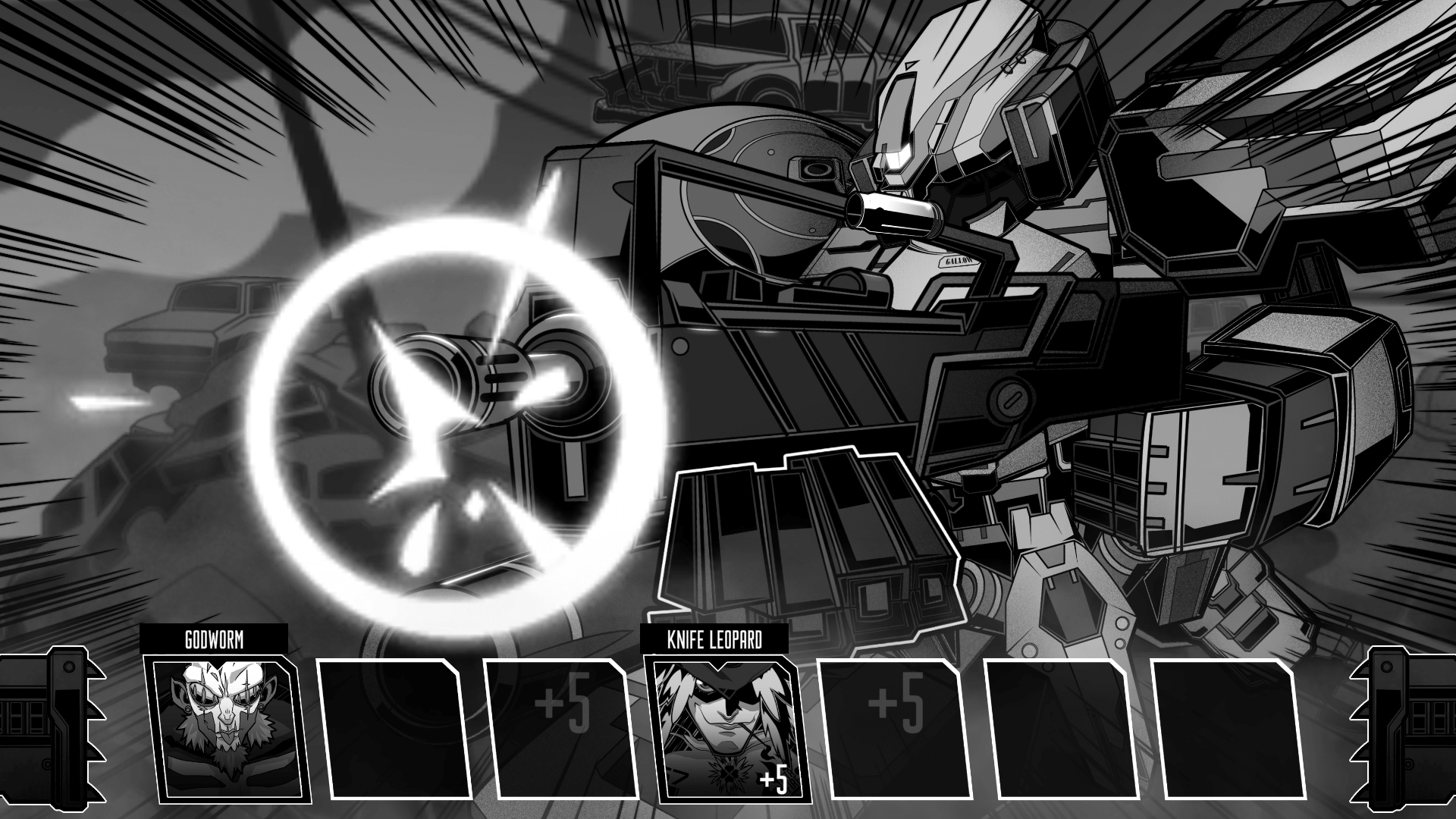 For that matter, some of the best moments in Wolfstride have less to do with the deeper story bits involving mech fighting and instead excel when they see our heroes engaging in more casual actions and side stories. Shade and Fancy Jack bonding over discussions of Korean dramas. Neb discovering Shade’s hidden talents at making omelets and wanting to go into business. A surprise party where everyone gets to play a social deduction game revolving around a piece of Japanese folklore. They’re creative, funny and show the more relatable and human sides of this city’s odd inhabitants (even when some aren’t human).

But for those of you who came here for the actual giant mech combat alongside the story, Wolfstride delivers satisfying gameplay mechanics as well. How it works is that you and your opponent essentially face off in turn-based combat on a horizontal set of tiles, and each of you has your own amount of action points, movement points and (if desired) ammo, and your own attacks and skills. Each attack can cover different tiles, and they can deal more damage not only based on your gear, but if you attack from specific tiles or pin your opponent in a corner. And if desired, you can push your opponent back a space by moving onto theirs for the cost of two movement points instead of one. The goal is to deal enough damage to your opponent’s chest (where the core is located), but destroying their arms can deprive them of attacks and skills until they’re repaired and destroying their head means they can only attack random areas. 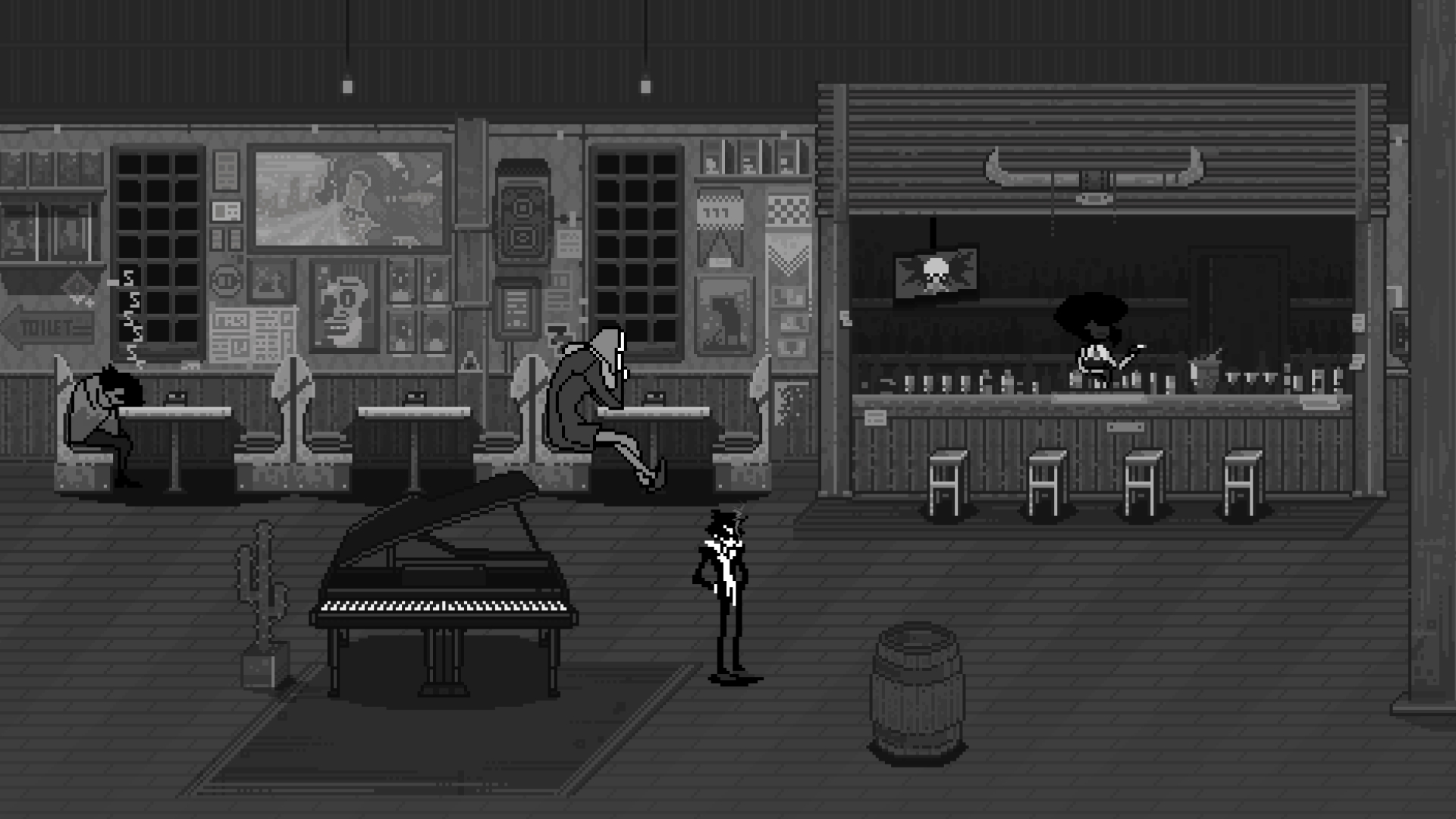 Basically, Wolfstride’s combat hits that sweet spot of being deceptively simple yet a lot of fun to figure out, going over each move and figuring out if the range combined with the amount of action points needed and the limb required works best, analyzing opponents each match and trying to figure out where their key attacks come from, knowing when to deploy proper defenses, getting a good balance of stat-boosting gear going, etc. And the combat is boosted with the help of some pulse-pounding music and attacks that leave an impact, with each attack and skill having its own odd flavor, ranging from the likes of shotgun blasts to breast implants, of all things.

It helps that Wolfstride is dripping with style as well, perfectly nailing the mech designs and giving them their own unique designs that fits their pilots and cultures in this bizarre universe. Not to mention the glorious anime-style portraits of the cast that show up during discussions, which gift them with some gleefully over-the-top expressions that let their personalities shine through and look cool in general. The kicker is the deliberate use of low-tech pixel art for the actual character sprites and background, creating an impressive contrast that leaves its mark, plus the deliberately monochrome colors that grab your attention as well. So the story and cast are amazing, and the fights they get into lead to some great combat, but then there’s everything in between during each day…

Some days you’ll have objectives to accomplish, which typically just involves going to a certain area or areas and interacting with something, but a lot of the time it’s “Free Roam,” where you can just wander around Rain City until you decide to call it a day. And sadly, there isn’t a whole lot to do, with only the occasional conversation to eavesdrop on or extra line of dialogue being added. Heck, before you can visit each area, you have to trek through an oddly barren street for almost no real reason, and even then some areas don’t have anything to do, like the convenience store that seemed to be out of everything unless that plot requires it. 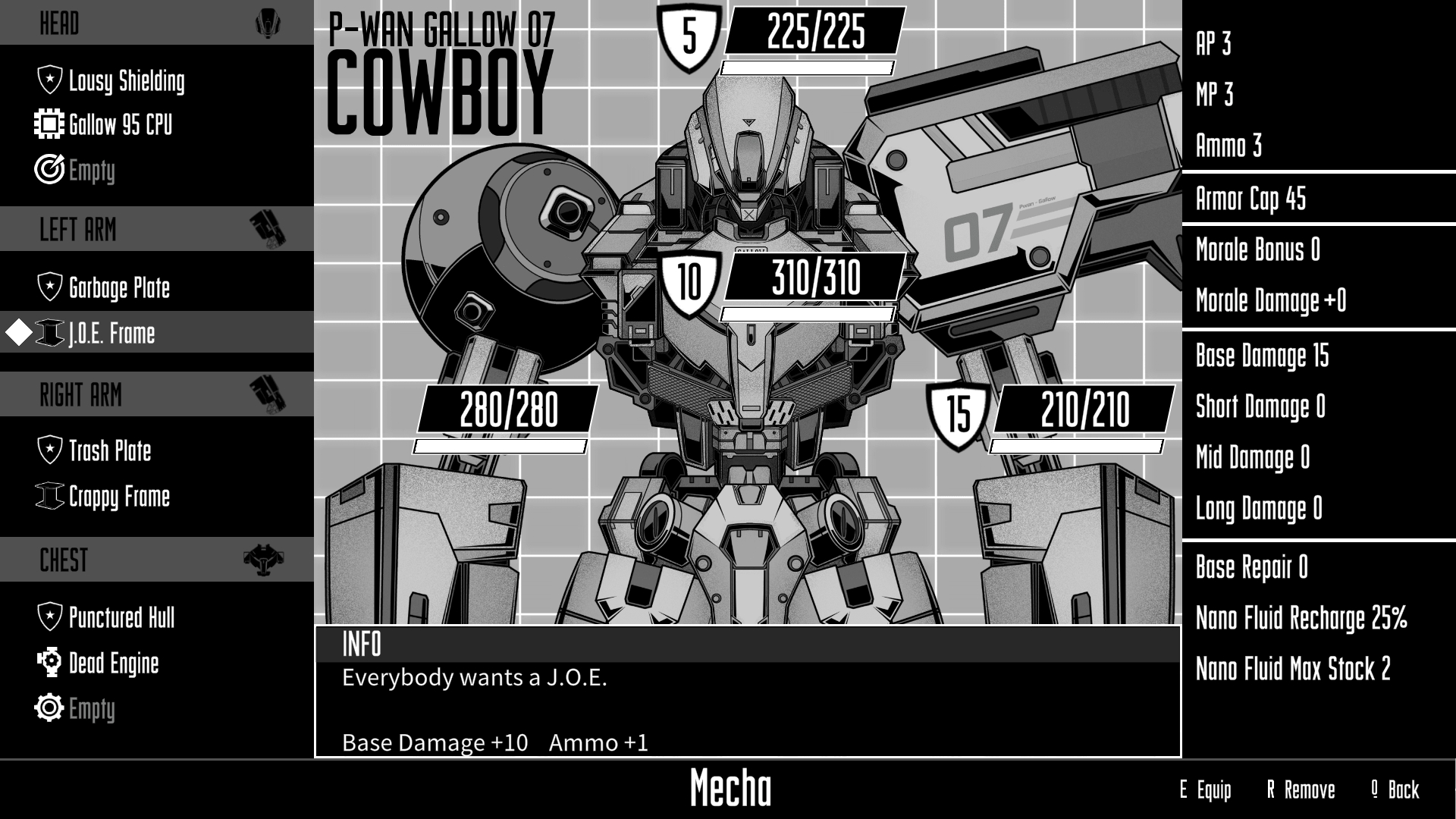 Then again, I get the feeling that either I was able to find a way to succeed way to early on in Wolfstride or the game had made things too easy. Which is bizarre, because it felt like the game was actually indulging in early game hell until the mini-games were unlocked. As you progress, you unlock a batch of odd jobs you can repeat over and over for cash and random items. These range from a so-so bike delivery game to QTE cat-bathing or timing-based junk salvage, which were rather fun. Okay, picture gotten, I would have to grind in these areas in order to earn money and goods in order to prepare for upcoming battles (there’s also a way to grind with virtual mech battles by interacting with a game console, but your opponents will either be the same two random mechs over and over or a series of special battles you won’t be able to handle until later chapters). I can work with that.

Because of the mini-games’ brevity and the fact that you can do as many per day as you want, however, it’s easy to earn several thousand dollars a day, at which point you can unlock all the current top-tier parts and moves, and that suddenly made things into a cake walk. I would head into our team’s latest highly-anticipated mech fight hearing about how much of a challenge it’s going to be, only to immediately destroy the arm needed for their most powerful attacks by the second turn, and then used a defensive move that allowed me to sap their nanofluids to make sure that they didn’t have enough time to recover before destroying the other arm, then going straight for their chest to finish them off. COWBOY walked away with barely any scratches at all and this occurred for a long string of matches. 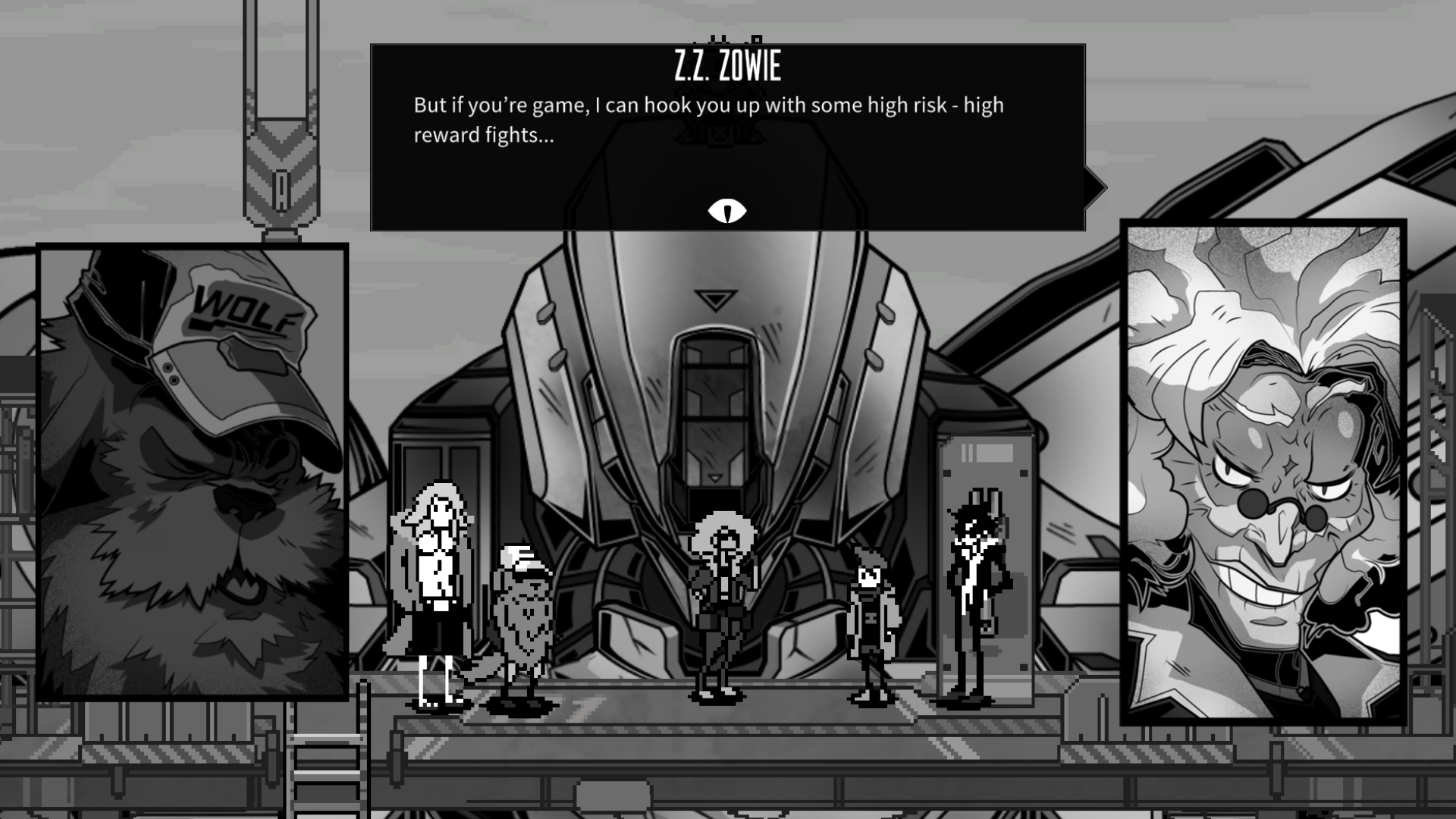 Maybe it was just a winning strategy and/or set of moves that I had stumbled into, but overall, it just felt like the pacing in Wolfstride kind of takes hit once you discover any path to financial success. For another example, a side quest involved investing in and restoring an old arcade to create another source of revenue, and I had enough money to purchase all available upgrades to the place in a single day. But after just a few visits, the upgrade options just stopped appearing. In hindsight, it seems like the intent was to make small investments over time and have this part of the story last for a while in the process, but you can easily knock it out ASAP.

Now, you might think “Well, why didn’t you just stop playing the mini-games after things were getting too easy?” For one, if you have to apply any sort of artificial challenge with any game just to improve its overall difficulty, then the challenge level is still flawed. And second, one of the items you can earn from mini-games are pineapples (it makes sense in context, kind of), which are used to give to other characters and improve your friendship levels with them, earning unique skills, boosts, mech parts and more only obtained via this process. It’s a nice touch that gives Wolfstride this additional flavor, but as mentioned earlier with the mini-games, whether or not you even get pineapples from them is entirely random, and you need more than a few of them. I was actually sitting on fifty thousand dollars and a surplus of spare parts, and practically begging the game to not give me any more, just let me have the pineapples I wanted.

The sad part is that while the last several paragraphs have been spent criticizing the game-breaking elements, awkward pacing and impacted difficulty, there’s still this charm to Wolfstride that kept me coming back. Much like its scrappy protagonists, there’s just this way how it kind of just rigs everything together with what awkward blend of parts it can, and creates this sort of underdog that’s clearly not a high-quality machine, yet can still win major battles with enough effort. Wolfstride’s greatest strength is its charm, and because of that, it still manages to create a memorable experience. 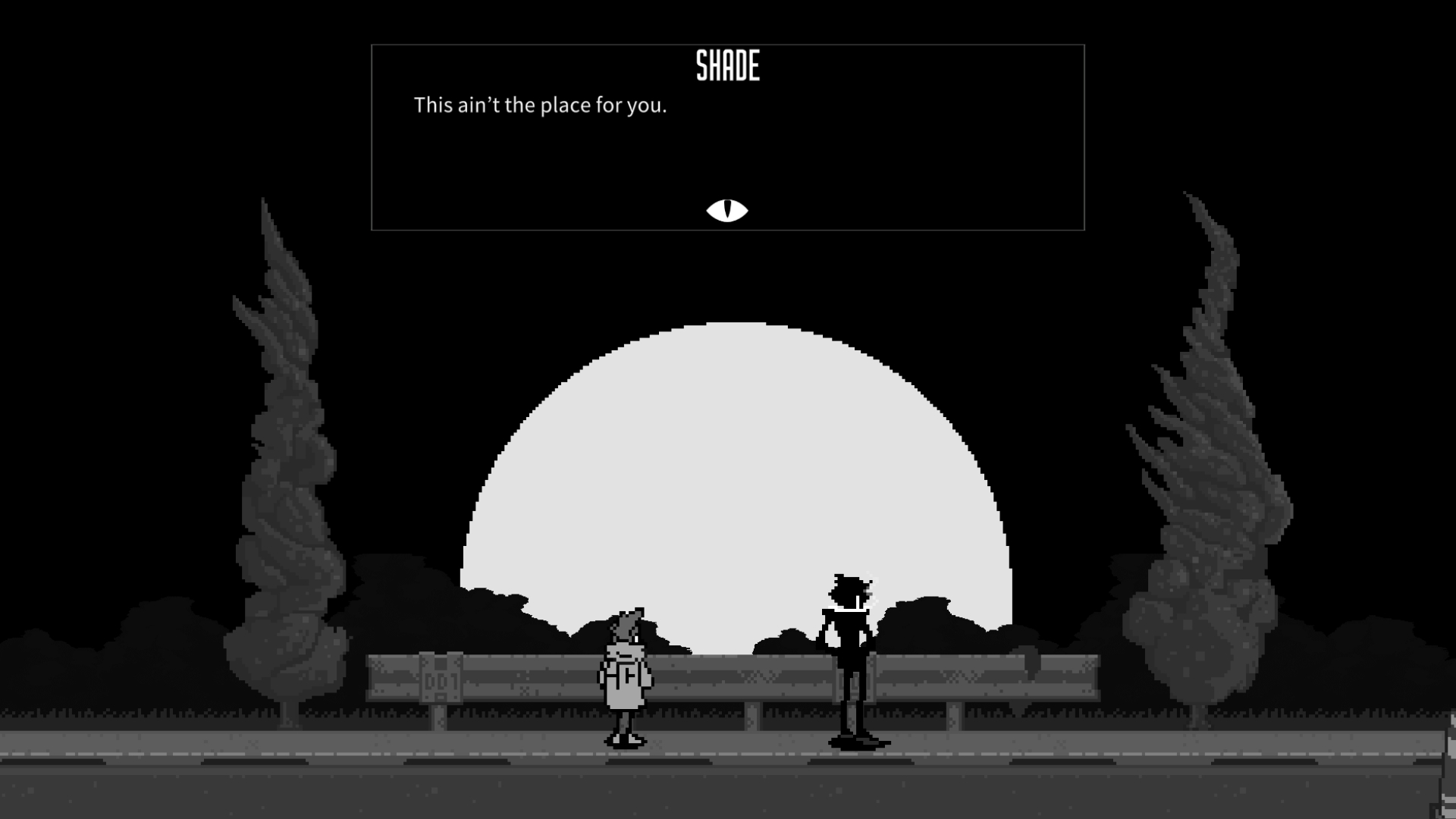 Wolfstride has its flaws, but if you’re willing to get past them, it ends up having a unique charm in its story, characters and combat that’s worth checking out. Sure, the giant anime mech battles may be a main draw, but you’ll stay for the clever bits of character development and glimpses into the history and personalities of these rascals as you get to know them. Wolfstride doesn’t always land with a huge mechanical blow, but it can still deliver a decent hit overall.