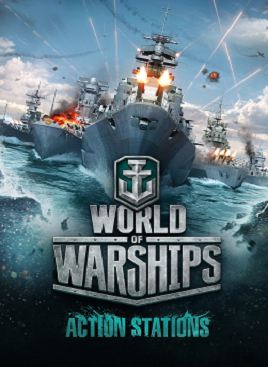 With a cacophony of splashes and the piercing sound of shredded steel, the unfortunately named Captain Goattongue realized that he had blundered in a major way. He had caught sight of an enemy cruiser just pulling around a distant island and heedlessly pulled away from his group to give chase. Pouring down shells from his torpedo boat’s deck cannons, he eked out as much speed as possible, hoping to get the perfect angle to lay waste to the now fleeing ship with torpedoes. That was when he overcame the island and discovered what lay beyond: a destroyer and a battleship, just praying for someone as stupid as Goattongue.

Thinking as quick as he could while cursing his stupidity, he turned into the line of oncoming torpedoes, just narrowly weaving through the gap. The closest one came within bare meters of his port side aft. Targeting the battleship, he let loose a volley of high explosive shells. With a series of hits, the deck of the goliath caught fire, tendrils of flame licking the sky. That is when he realized that the enemy destroyer would still need more time to load the torpedo tubes. Bringing his cruiser back broadside to the enemy ship, he let loose all available underwater ammunition and completed the turnaround to retreat back behind the island. It was at this point that he crashed stern first directly into the friendly battleship that was coming to save his bacon. As the destroyer slowly sunk on its journey to meet Poseidon, one clear fact was apparent. I…that is to say Captain Goattongue, truly suck.

To say that there is a bit of a learning curve to Wargaming’s World of Warships is somewhat of an understatement. Much like World of Tanks and World of Planes, World of Warships knows how to craft an experience that perfectly blends arcade action with just enough simulation aspects to feel substantial. Obviously, this is not a straight simulation, as each person takes complete control of enormous ships that would require a large amount of man power in real life. But other aspects, from how the ships turn and accelerate, to the need for compensation of aiming based on a deck cannon’s location on the ship, lends a feeling of depth. 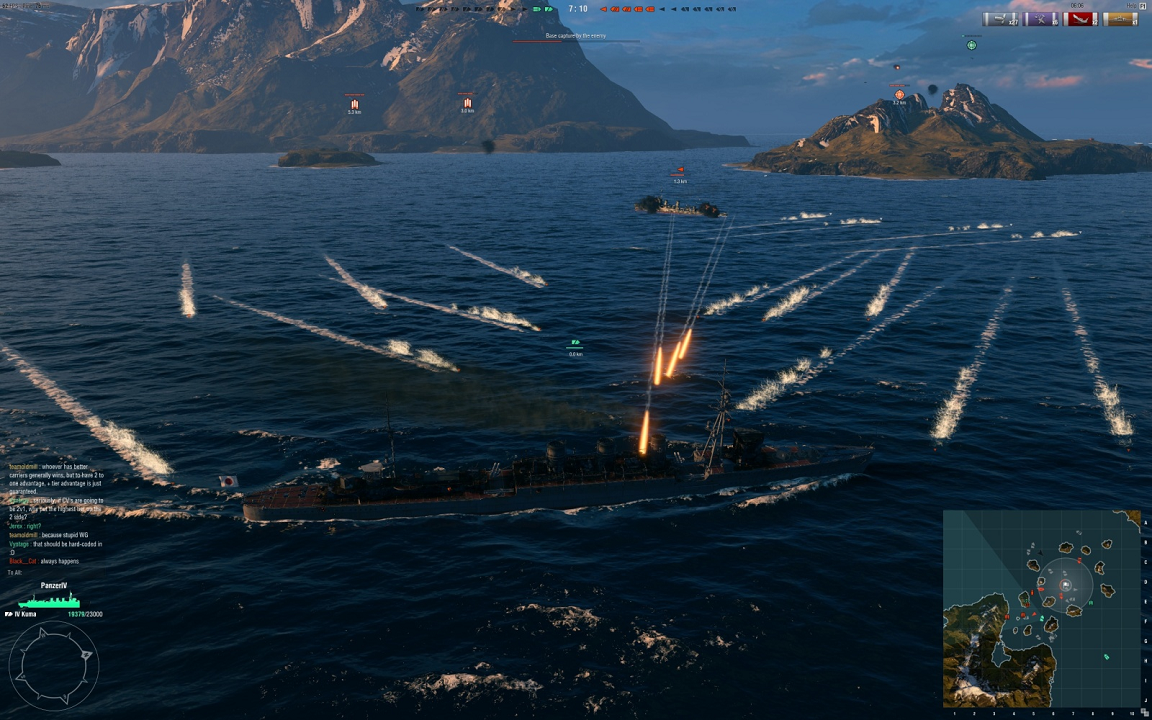 This is not to say that it is unfairly difficult to start fresh in this game. The controls are quite simple. WASD controls acceleration and deceleration, and turning and the mouse aims the weapons. It is the intricacy of the various ships’ behavior that gives this title a feeling of something entirely unique. While this is a game focused on literally blowing the enemy out of the water, the metagame of learning the strengths and weaknesses of the currently chosen ship adds some long legs to this title that makes the free-to-play grinding close to a non-issue.

There are four different classes of ships to choose. All players start off with a cruiser, which is a lighter ship whose purpose is destroyer hunting. After an hour or two of play, the first destroyer class becomes available. These are the fastest ships in the game with a focus on hit and run techniques via torpedo strikes. Battleships are the lumbering behemoths of this title. Able to soak up and dish an astounding amount of damage, these tend to be magnets for enemy shells due to their slow speed, ponderous turning rates, and the achingly lengthy time it takes to bring cannons to bear. Finally, there is the aircraft carriers. These play more like a real time strategy game, with an overhead view and an impetus to deploy fighters for anti-aircraft coverage and bombers to, well, bomb stuff. 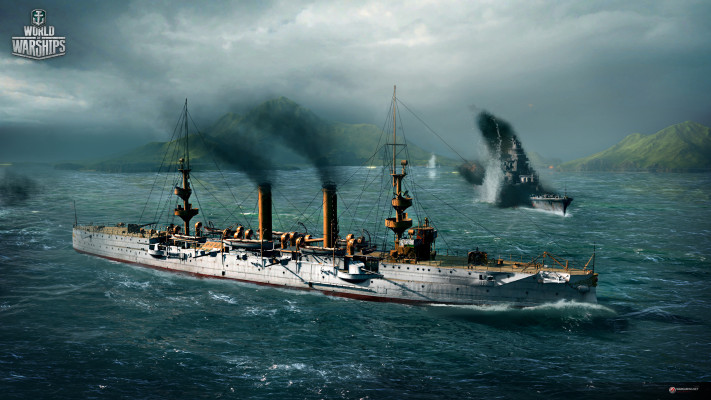 This rock, paper, scissors dynamic creates a demand for smart play. Teams that win are the teams that deploy properly, with each player using their strengths to shore up their teammates’ weaknesses. Unlike fast-paced shooters, this means more than coming up with fake out plays and focusing fire. Subterfuge wins more often than firepower.

This is not to say that things don’t get heated. Once both teams start battling in earnest, the feeling is one of barely contained chaos. With the flying ordinance, crashing of waves and the desire to get that XP boost from the kill, it becomes easy for a less disciplined mind to go the way of Captain Goattongue. The minimap in the lower right corner does help keep track, but forgetting to check it while zeroing in on an enemy with freshly loaded battery of armor piercing shells is an understandable mistake. This is not a criticism. 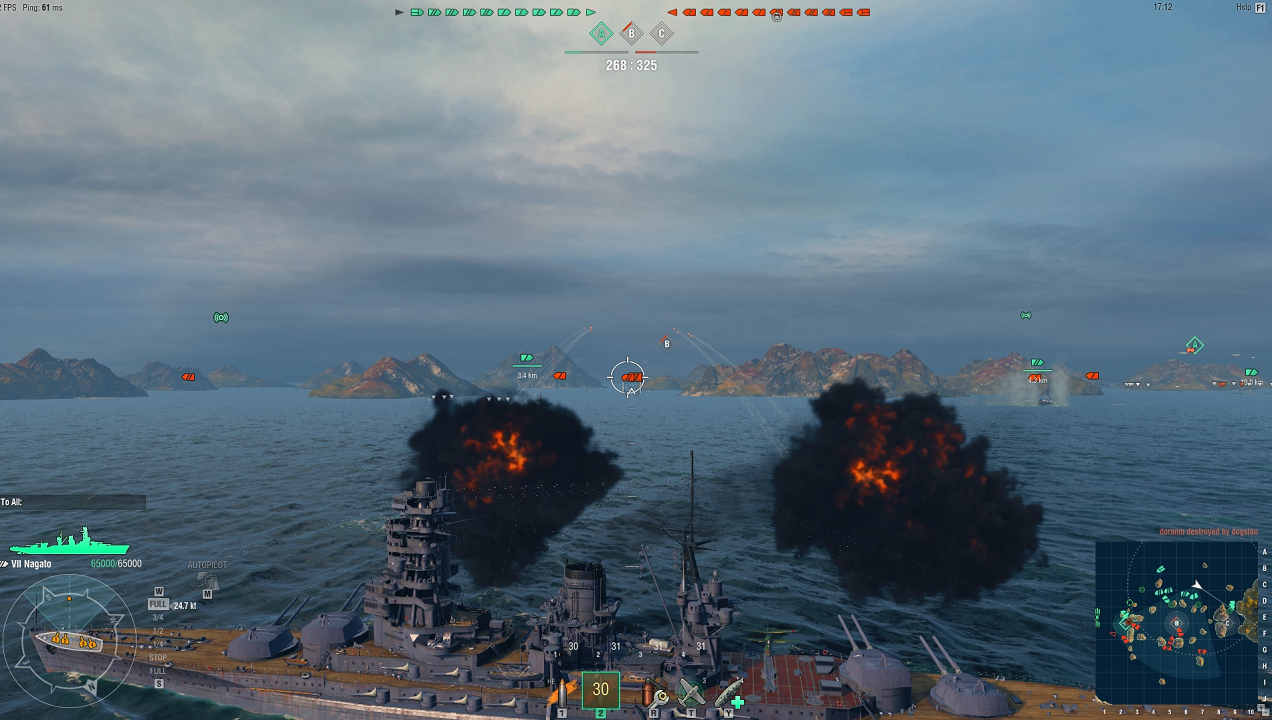 World of Warships also offers a variety of modes. In addition to teaming up with humans to fight AI and straight team vs. team, there are changing goals. These usually involve capturing and holding a certain amount of control points on the map. Anecdotally, the variety in these modes do not seem to make a difference. I did not experience one sortie that wasn’t won or lost by the sinking of every ship on one side or another. Since the actual battles are great, this is not too big of an issue, but having seeing more random elements, such as respawns, occasionally showing up in the general random queues would add some legs to this one.

Also, as this is a free to play game, be prepared to grind. Quite a bit. While the amount feels somewhat toned down when compared to Tanks, there is always XP and coins that need to be earned. The XP is spent researching items, such as part upgrades and new ships, while the coins are used to actually purchase them. This means that players will get plenty of time to learn the ships they have, and the new unlocks feel more rewarding. Money can be spent to speed the process along, but those who keep their wallets closed will not be a a disadvantage. They just need to play more for the goodies. 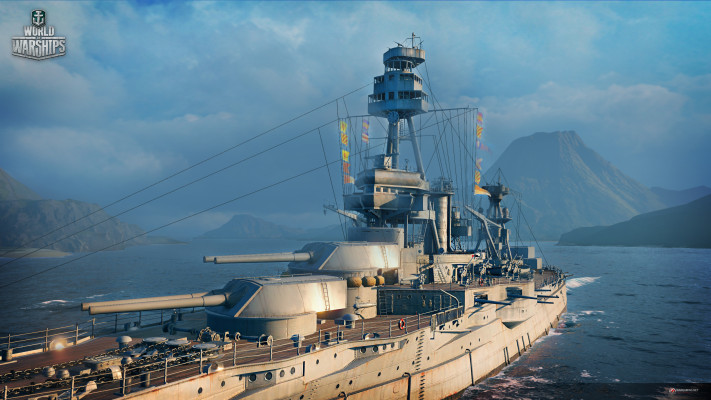 It might not have the unbridled thrills of World of Warplanes nor does it possess the immediacy of World of Tanks, but World of Warships manages to fill a special spot for action gamers. The deft fusion of strategy and explosives baits the trap for a “just one more game” cycle that can ruin work days. Its version of high seas mayhem absolutely should be experienced by anyone with a desire for sending thousands of man hours and millions of dollars bubbling to the bottom of the drink. Plus, all the foul language that it creates can be excused as “roleplaying.” Little tip: be smarter than Goattongue.