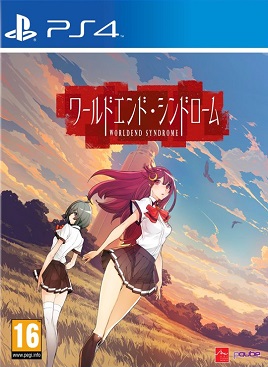 For better or worse, Japanese visual novel games have had quite a boom in the west in these past few years. Previously, English-speaking audiences were only getting a handful of titles that had some other gameplay hook to justify taking the time to localize them. Phoenix Wright would be a prime example of this. Recently, though, we’ve been graced with a much broader range of titles, like Muv Luv all the way to the excellent Danganronpa series. It’s been a golden age for those who enjoy quirky stories and low impact gameplay. Arc System Works has contributed to this trend with titles like the Xblaze series, so they aren’t exactly neophytes to the genre. Still, their publishing of Toybox Inc’s Worldend Syndrome in the west is a bit of an oddball if, for no other reason, than there isn’t a tie in to an already popular fighting game like Blazblue to pad out the potential audience. Whether or not the gamble will see success for them in the long run remains unknown, but it must be said that, while interesting, Worldend Syndrome is exactly what the visual novel naysayers accuse the genre of being, seeing as it has little interactivity and a long playtime.

That isn’t to imply that Worldend Syndrome is a bad time. Far from it, in fact. The issue is that this is a title that’s more about reading and enjoying the story than it is about making copious decisions that affect the outcome of the tale. There are choices to be made in the course of the story that affects romantic relationships with one of the many available ladies in the game. There’s also a mystery that unfolds, bearing supernatural elements and assorted Japanese folktale influenced weirdness to unravel. This is a game that is perfect for solo late night sessions, for relaxing after a late shift or a bit too much fun. Something that insists on being enjoyed in the hours just before dawn as the tendrils of night give way to the singing of birds. It’s a bit creepy and plenty lighthearted, simultaneously relaxing and disconcerting.

The story takes place in Mihate Town, a small Japanese village out in the boonies. People in this town take their legends seriously and it shows. Pinwheels decorate homes and reporters come to report on the oddities of the local beliefs. This unique culture also inspires the nationwide phenomena that is the young adult novel, Worldend, written by a local teacher. Much like The Hunger Games or Harry Potter, this book has captured the imagination of millions across the country, inspiring a wispy voiced popular radio show, Worldend Syndrome, and a major motion picture starring a pop idol. The player takes the role of a transfer student that pretty much falls into the middle of all of this. He essentially gets gang pressed into joining a club focused on researching the local legends and finds that there may be more to the stories than mere superstition. 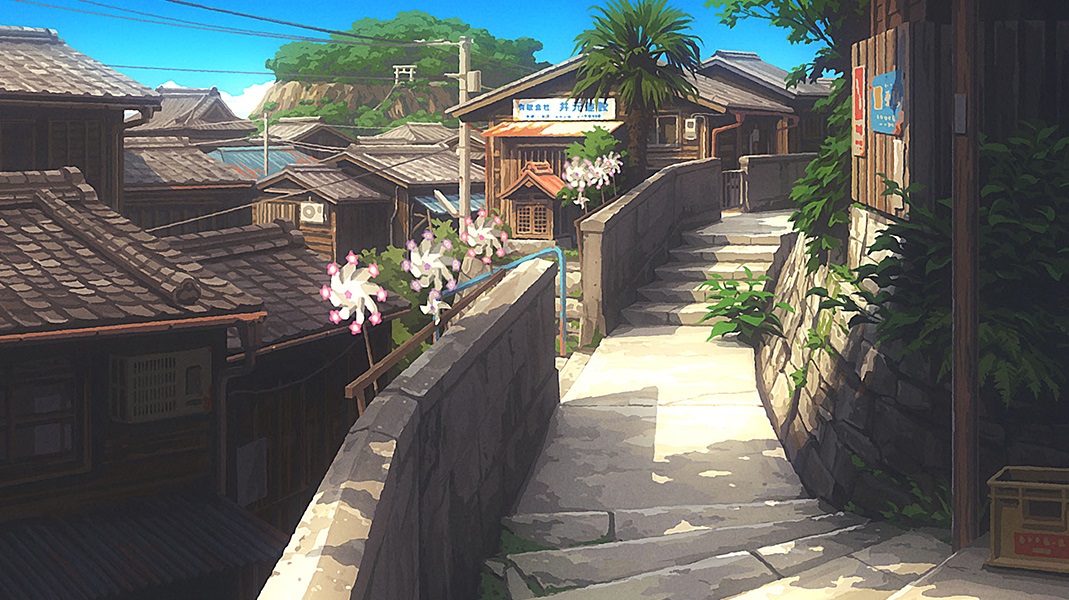 The most prevalent of the legends is that of the Yomibito. Every one hundred years, the dead come back to life. Those with close ties and feelings towards the deceased are more likely to see them returned, which ought to be cause for celebration. The problem is that the Yomibito have a certain lack of sanity and common manners and have a tendency to eat the living in hope of returning their lost minds. This serves as the crux of the tale, starting with the disappearance of a local high school student and leading down some strange twists and turns. It might help to point out that this game features scenario designs by Tomio Kanazawa, a producer of the cult favorite Deadly Premonition.

Worldend Syndrome isn’t a base level creepypasta title, though. It feels more like a slice-of-life high school comedy for vast swaths of the narrative. As mentioned previously, the protagonist will have a chance to woo and impress different ladies and make friends with a large variety of colorful characters. Some of it can be a bit heavy on the tropes. One cannot count the amount of times the “accidentally woke up in bed with a member of the opposite sex” situation has happened across anime and games, but now there’s one more. On the other hand, so much of it is legitimately funny. One particular long-running bit is one of Miu, a soft spoken and seemingly shy character only speaking up to insult the protagonist’s friend, Kensuke, with monosyllabic names. It manages to land more often than not. 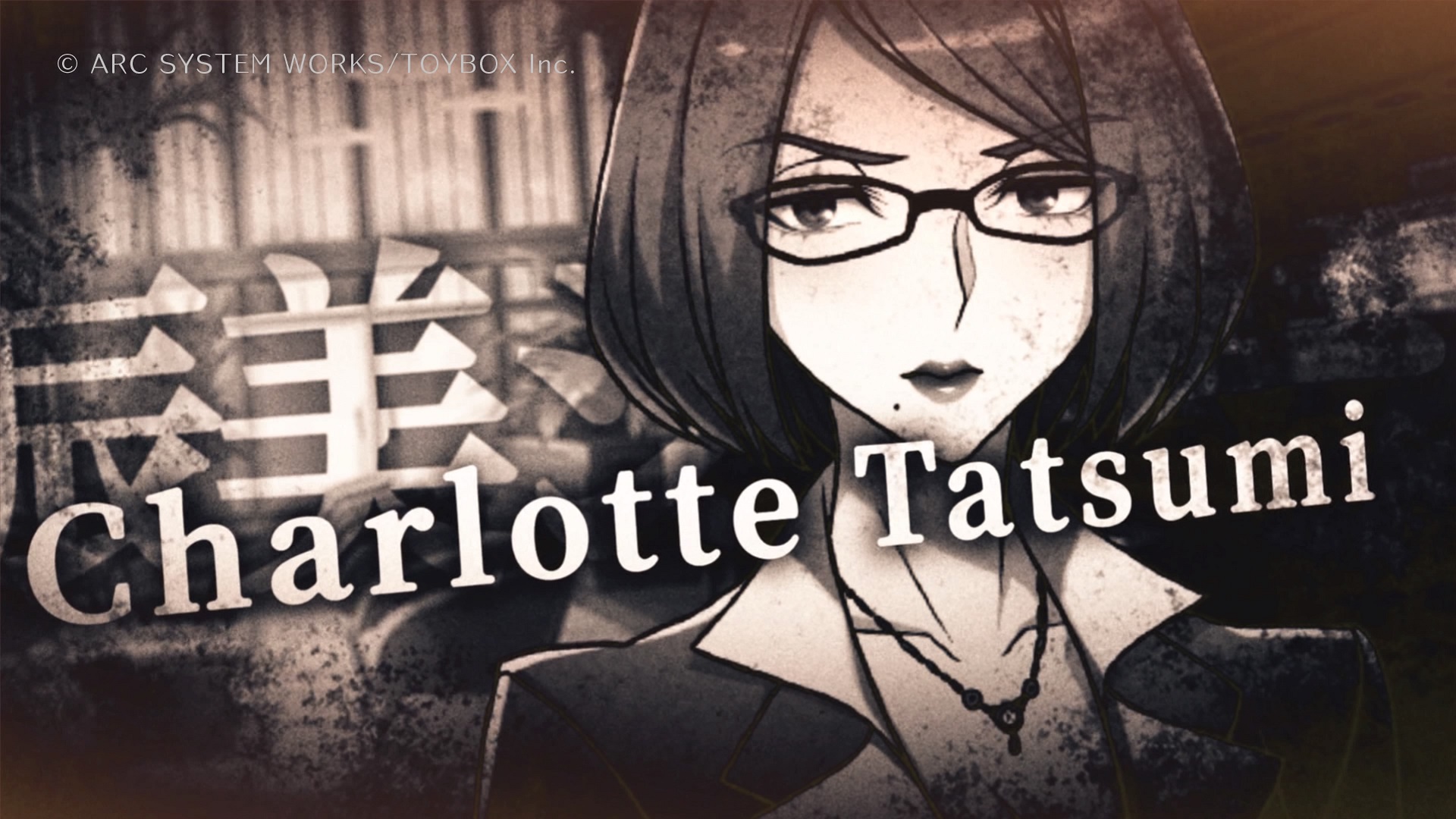 It helps that the characters have a bit more depth than it would appear at first blush. One of the first characters the player meets is Maimi. At the beginning, it seems that she is going to be the resident tsundere, but quickly grows into a more complex and interesting personality. Almost every person that the player meets falls along these lines, with the person being an obvious archetype but soon evolving into something much more interesting. This seems like an intentional decision on Toybox Inc’s part, a way for them to play with expectations. A moment near the very beginning encapsulates this ethos: the typical anime opening complete with a J-pop song begins to play. Right when the drums start to get into the song proper, the image burns and drops off the screen.

The biggest problem with Worldend Syndrome is that, for the subversion and tricks the developer wants to play to work, the player has to already be very well versed in its anime style, be it through other visual novels or TV shows. Basically, anyone who doesn’t have a Crunchyroll subscription or already have a library full of visual novel titles won’t be able to appreciate what the developer and scenario writers are doing here. An audience without an already existing appreciation for such inside references might be more likely to find themselves a bit bored, which will then lead them to playing a game of “Find the Typo.”

Boy, are there typos. Right from the jump, players are informed that “This Title Support Yada Yada” instead of “Supports” and “Once all this rain has past” instead of passed. It smells of a bit of a lack of attention to detail in the work that went into the English translation. It really needed a second or third pass of proofreading before being let out into the wild. Not to say that I’m not guilty of some heinous typos and murdering of the English language myself, but what hits the screen still passes through two editors first and we’re not charging an entrance fee. 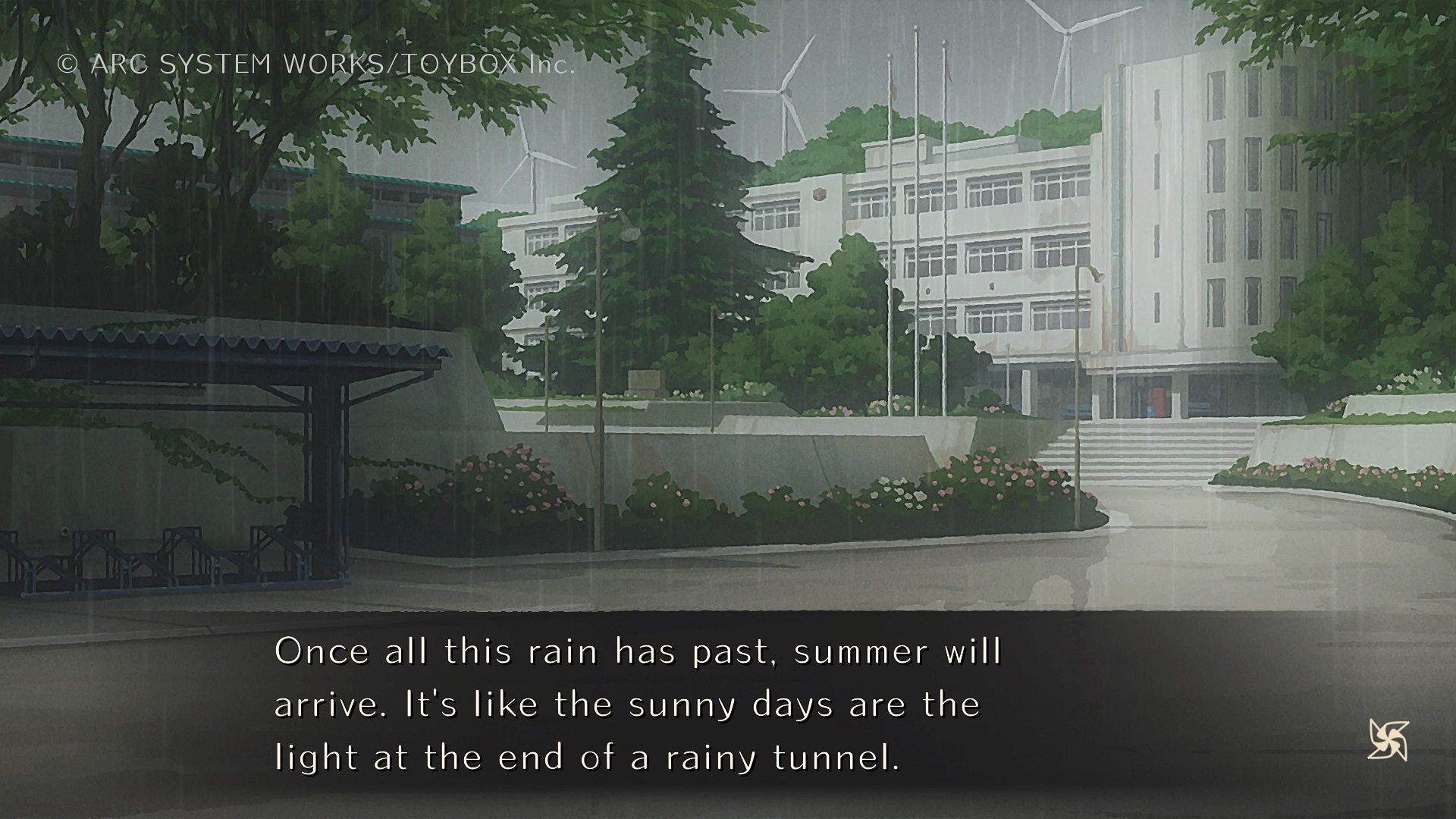 Worldend Syndrome isn’t going to change anyone’s minds about visual novels. That’s not the developer’s goals. This is a title aimed squarely at existing fans of the genre. For the forgiving segment of that audience, this is a must play. Worldend Syndrome is a highly-enjoyable read and the story goes places, but it feels like the uninitiated would need to do some homework before jumping in to get the most out of it. Those without a familiarity of the genre can still get some enjoyment out of it, but they would be better served waiting for a sale price. Those that don’t like the genre in general will simply use this as another example of how these games aren’t really “games.” That’s not the point, but there it is.