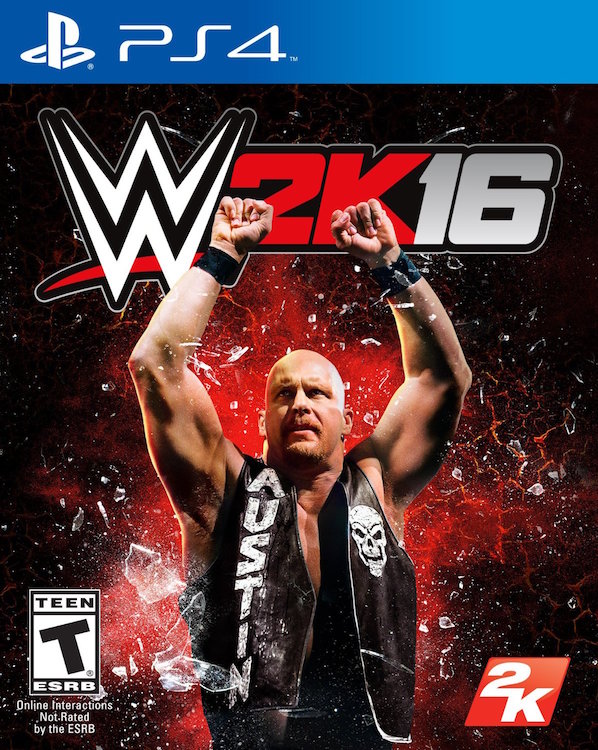 Last year’s WWE 2K entry was divisive at best. While we saw the potential in it, it still had a long way to go in order to ascertain the level of panache typically associated with most 2K sports titles. In many ways, WWE 2K16 intelligently builds on the foundation that was laid in last year’s installment, trying to tweak that which gave many folks pause while also creating a game with more content. In some ways, 2K has managed to do just that: provide us with quite possibly the most comprehensive pro wrestling game to date. And yet, it still struggles to nail what should be givens at this point in the proverbial game.

2K16 continues the trend established in last year’s game in being a wrestling simulator. Gone are the days of arcade-y mechanics and lightning fast movement. Now we are given an experience that tries to mimic the real-life square-circle with a cadence only rivaled by the actual sport. While 2K15 slowed the action to practically a crawl, providing to take things in a completely opposite direction of the faster titles in the series, 2K16 has managed to quicken the pace a bit while still keeping the in-ring combat methodical and never silly. Some people will undoubtedly still find the rhythm too slow, wanting something more akin to the older titles, but 2K16 is better because of this tailored flow that strikes a balance between a game and the real deal. This ultimately lends itself well to capturing the psychology behind pro wrestling that was all but nonexistent in the wrestling games of yesteryear, where mashing on buttons in rapid succession was what defined a quality rasslin’ experience.

Now, matches have that back-and-forth storytelling that we all love about the medium. In fact, outside of containing the largest roster to date, 2K16‘s strongest aspect is its ability to depict wrestling in all its calculated glory. Because things are a bit slower, it allows for a great deal of strategy. This means matches are typically the length of their real-world counterparts. By doing this, the experience overall feels authentic, but not at the cost of actual fun like last year’s endeavor. 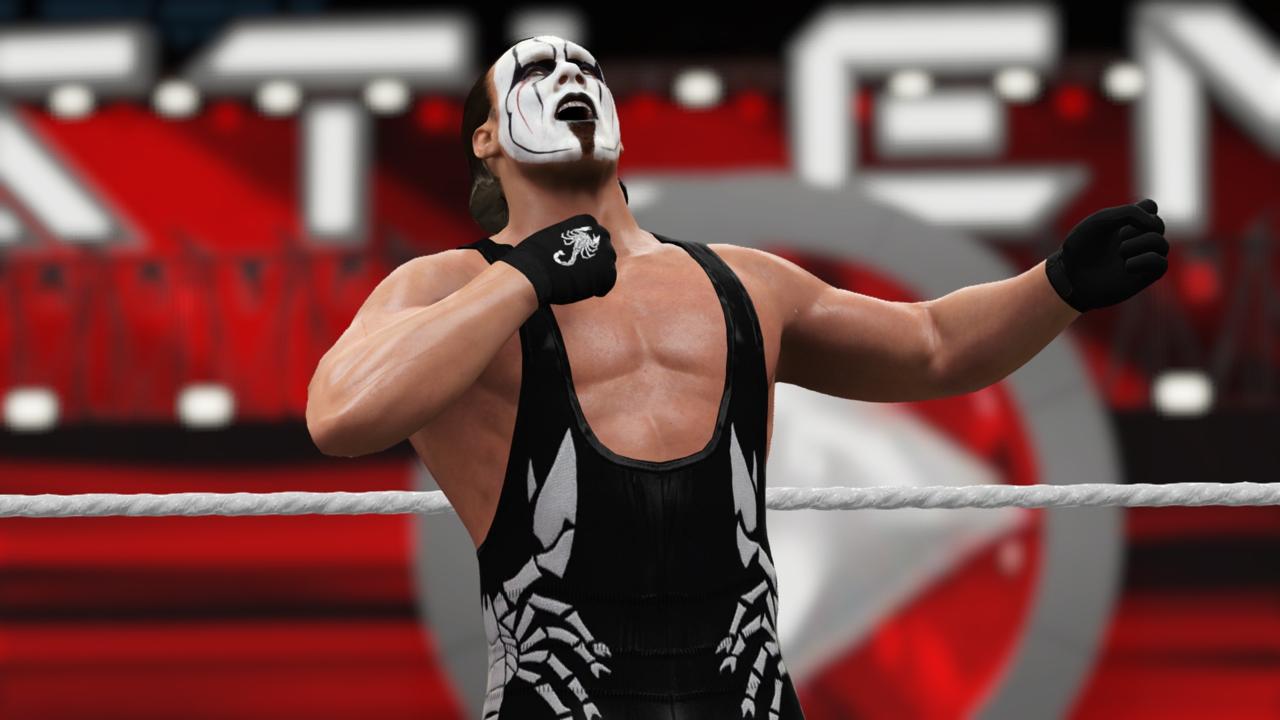 Much of this said fun is derived from the game’s many new systems and the dropping of certain antiquated ones of last year’s game. For starters, the reversal system has been given parameters. Gone is the ability to reverse any and every move. Sure, every move has a reversal, but the amount of times one can engage this mechanic has been contained via the limited reversal system. Now players have to build up the ability to engage reversal via dishing out damage and also taking it. At any one time, however, players can only have a handful of these reversals. Burning through them will leave folks needing to build them back up one by one. It’s a brilliant system that will be most noticeable in online play, which were little more than reversal spam-fests in 2K15.

But it also means that even in single player, the AI won’t be able to reverse everything folks throw at them. It’s an all-around smart system that should have been implemented a long time ago. Also new are the rest holds that players can make use of. These are transition maneuvers that lets folks catch their breath and plan their next move. They don’t make a huge difference in terms of how the match plays, but they do slow things down a bit and recover stamina. Consequently some will welcome them, while others will feel that they merely bog down the experience. We found them nice in that it was another way to bring the pain to our foes. They do play into the chain-grappling system though, which we think everyone can agree is awful. The mini-game like mechanic that made an appearance last year is back and remains mostly unchanged. Perhaps its initiated less than in 2K15, but it’s still there, and still awful. Fortunately, the feature can be turned off; so we’d imagine that very few people will play with it on.

Another new system is a far more in-depth submission system. The developers were clearly influenced by the UFC Undisputed games, and how that series approaches ground-based combat, as this time around players have to engage in another mini-game of sorts to either lock on a hold, or break free. Those attacking have a red bar that traces around the outer-edge of a circle must essentially give pursuit to the defender, who is represented by a blue bar on the circle. If the red and blue bars both overlap, the attacker locks and cinches on their hold; if not, the defender takes advantage. 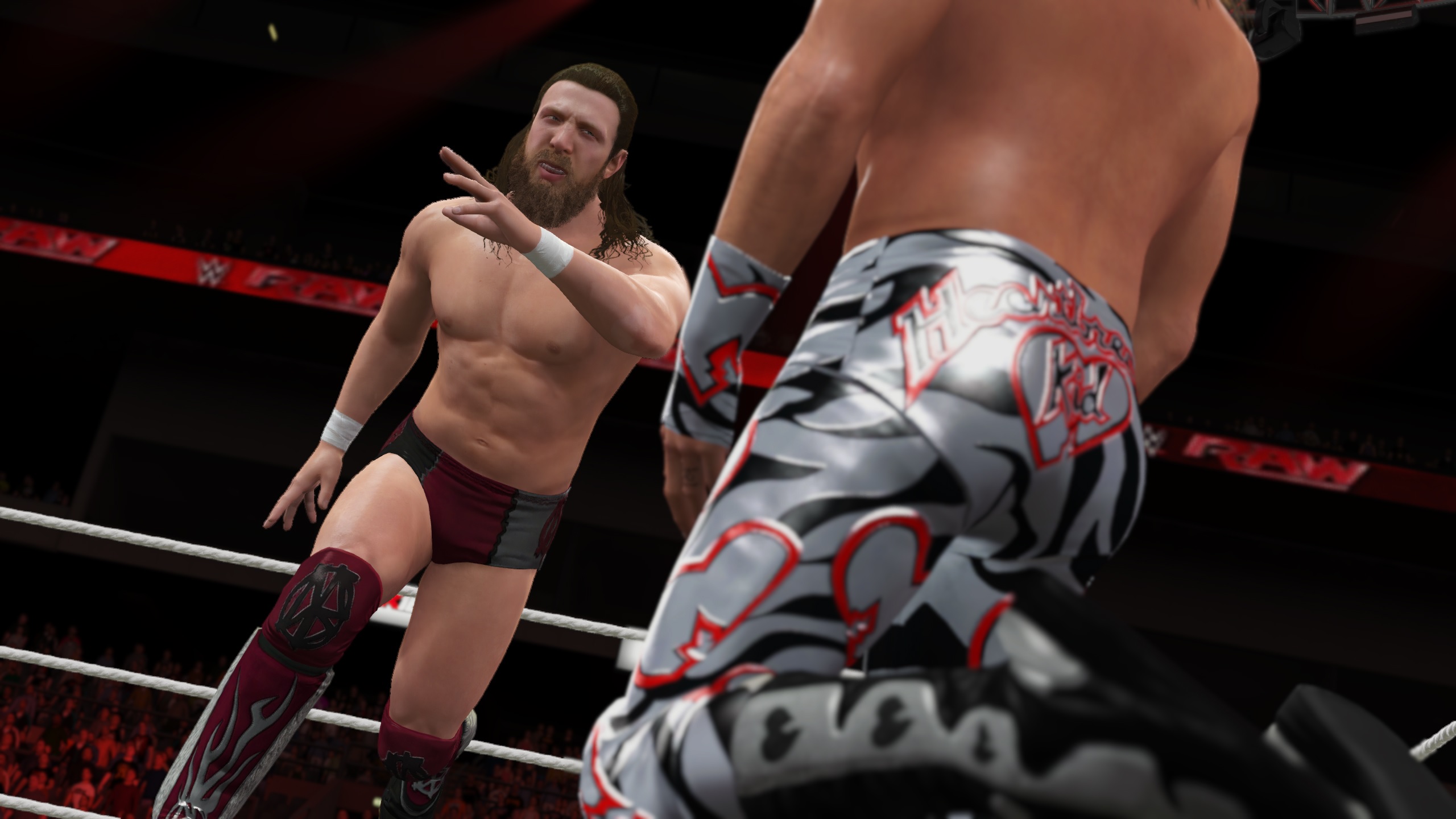 The problem with this is that playing against the AI, it’s nearly impossible to either get out of a hold or manage to put one on because, even on the easiest of difficulties, computer-controlled opponents seemingly know exactly what players are going to do. While playing against another player makes for a truer test of skill, even then we felt like the system was sloppy and not super resposive to our joystick presses. Sometimes when you want to run your tracer upward, and therefore press up, the system won’t respond. It just doesn’t seem readily obvious at which placement on the circle the corresponding directional press on the joystick will align. Which led to more than a few times of us submitting to a hold only because we couldn’t figure out how to effectively get out of it.

The pinning system has been modified slightly as well. Although the change is minor, it makes so much more sense and is better because of it. Players no longer have to hold down a button and then release it at the appropriate time to kick out of a pin. Instead, they only have to press a button when a ticker on the pin meter aligns with the kickout window. Again, it’s not a big change, but it enhances gameplay just the same.

Of course, going for a pin seems somewhat useless unless players have hit their signature move and finisher, because AI combatants practically kick out of everything. Beating them down with special moves means that surprise victories rarely occur unless of course the player is on the losing side of a pin–because that happened more than a few times thanks to the new pin kickout timing. By effectively having to land a finishing maneuver in order to win removed some of the drama of matches due to the ruling out of upset victories. 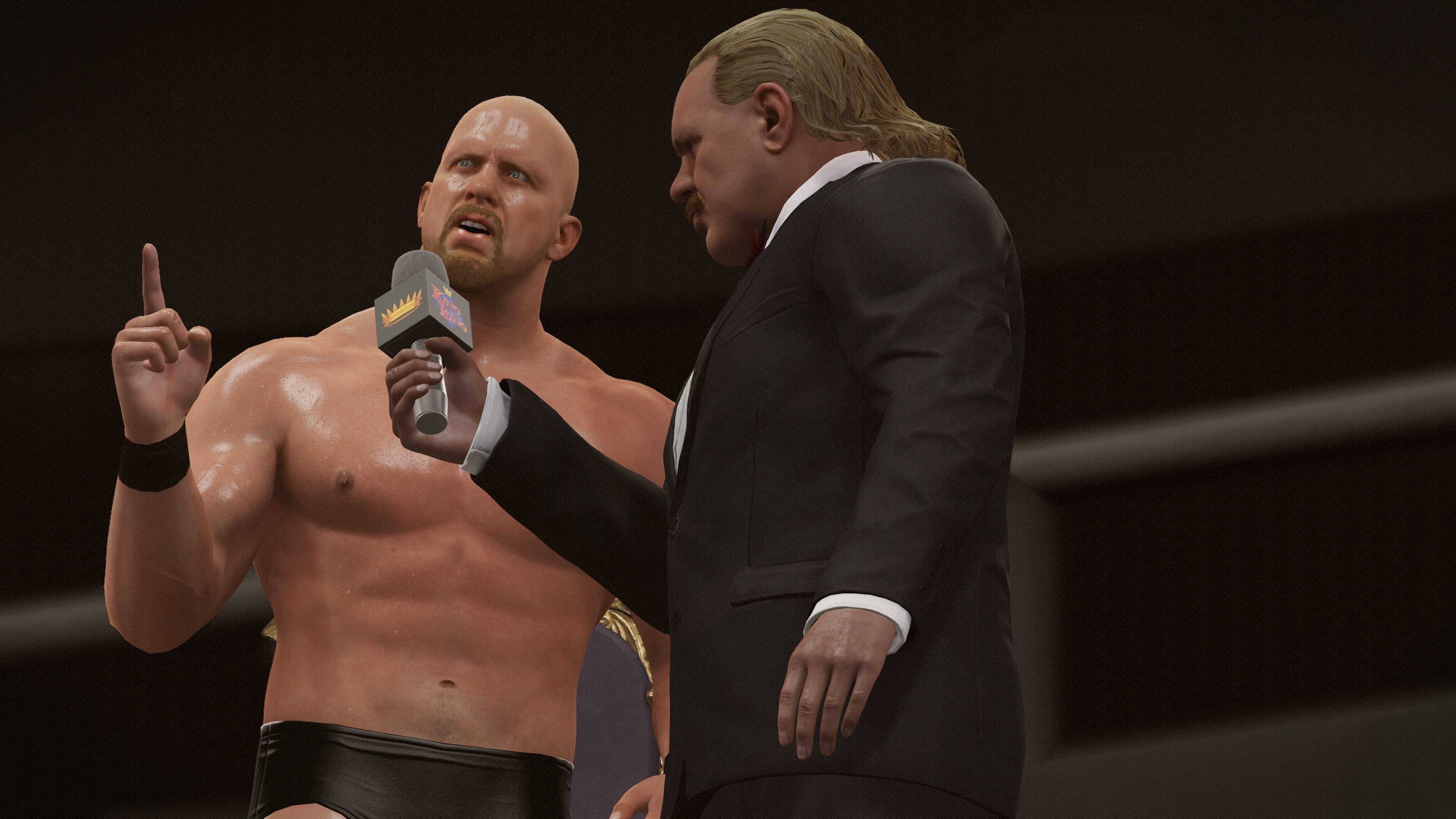 Perhaps the newest facet that folks will immediately notice is the massive roster update. With over 120 Superstars from the past and present, there really is something for everyone. And those included are worthwhile characters and some surprising favorites like Bobby Heenan, Rick Rude, a few variations of Sting, along with all the important current wrestlers and NXT guys and girls. Better still is the individualized and sharply crafted ring entrances for each of them. Details all the way down to the Ultimate Warrior’s tassles and Rick Rude cutting a promo before the match calling the audience members a bunch of “sweat hogs,” the presentation component of WWE 2K16 has never been better and more in sync with its real-life counterpart.

The aesthetic quality of 2K16 is just all around superb. Whereas last year’s installment only had a handful of finely detailed models, with others looking rushed, this time around everyone has been given the proper graphical treatment. Sweat glistens, individual strands of hair flow over shoulders, physical nuances like the way one wrestler shifts their weight while walking and how they throw punches are all represented in beautiful visual fidelity. Animations can get a bit stiff at times, but on the whole they look quite fluid. Move transitions look especially smooth and give that WWE-style presentation to the whole ordeal. The audio department spared no expense here either. Be it the thud of a well-placed kick, the slam of a superplex, the crash of a chair against one’s skull, or the driving percussion that opens up Seth Rollins’ delightful theme song, 2K16 sounds top notch. 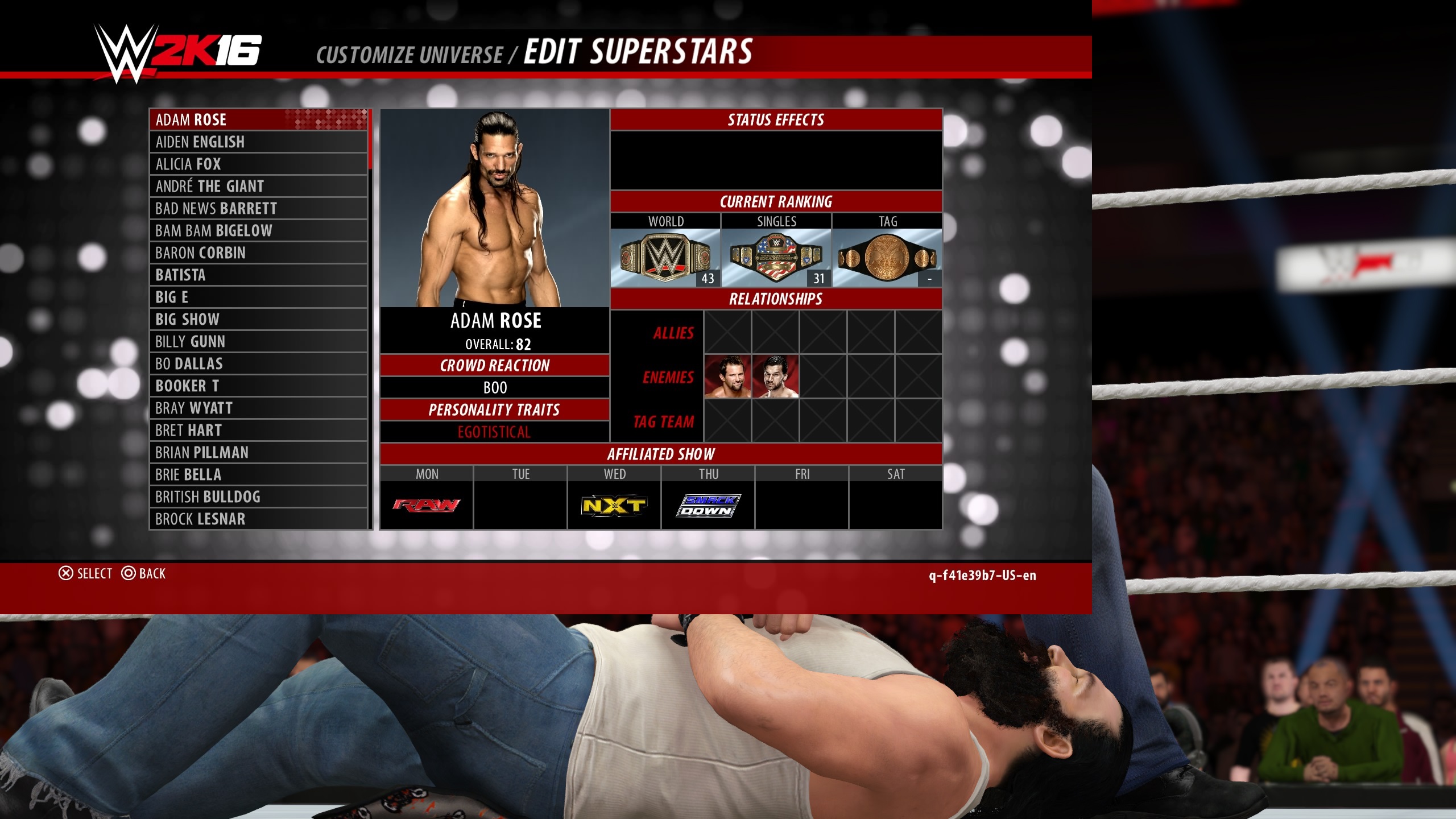 In addition the smorgasbord of modes, the Online play has been greatly improved. The netcode was pretty stable in our time with it and its overall not as restrictive as it has been in the past games. Though the two modes that the game focuses on the most is MyCareer and the 2K Showcase, which focuses on Stone Cold Steve Austin himself. The latter bit is especially sleek in its presentation as the developer’s attention to splicing together vignettes that chronicle Stone Cold’s biggest matches are just as good as they have been in the past few years. Seeing the storyline build-up and fallout for some of Austin’s biggest angles has that sheen and presentation panache that we’ve come to expect from WWE itself. Though, we do have to say that only being able to play through Stone Cold’s career feels oddly limiting in contrast to some of the past Showcase modes that had players jumping back and forth between various wrestlers, giving them some much needed character and gameplay variety. Even still, Stone Cold is one of the most iconic personalities pro wrestling has ever produced, so being able to play through those significant, medium-defining moments is great fun.

MyCareer is also exponentially better than last year’s iteration, which felt like a rushed, sloppy mess. It feels comprehensive this year, letting players better personalize their created Superstars through the inclusion of backstage interviews that play out like a Bioware branching-narrative game. Being backstage after a match with Renee Young and talking about the match you just had, only to then flip from face to heel simply by responding to her questions in a villainous fashion is wholly gratifying and more in line with what we expected from the same mode in 2K15. Players can also bring home tag team gold in MyCareer this time around, which again makes the experience feel much more individualized since not every player will want to be a top singles star — they may want to become the second coming of the Road Warriors. All in all, there are just so many more options in this year’s career mode and the game is so much better because of it.

Universe mode also returns and is mostly what folks would expect from it. It’s a fan’s ultimate fantasy mode in which they take control of being the booker of all WWE shows, deciding who is involved in which storylines and who the champions are. It’s really more of the same here, which is a good thing as the Universe mode has been the most consistently good feature in the series for some time now. 2K clearly took the “if it’s not broke, don’t fix it” route and were smart to do so. 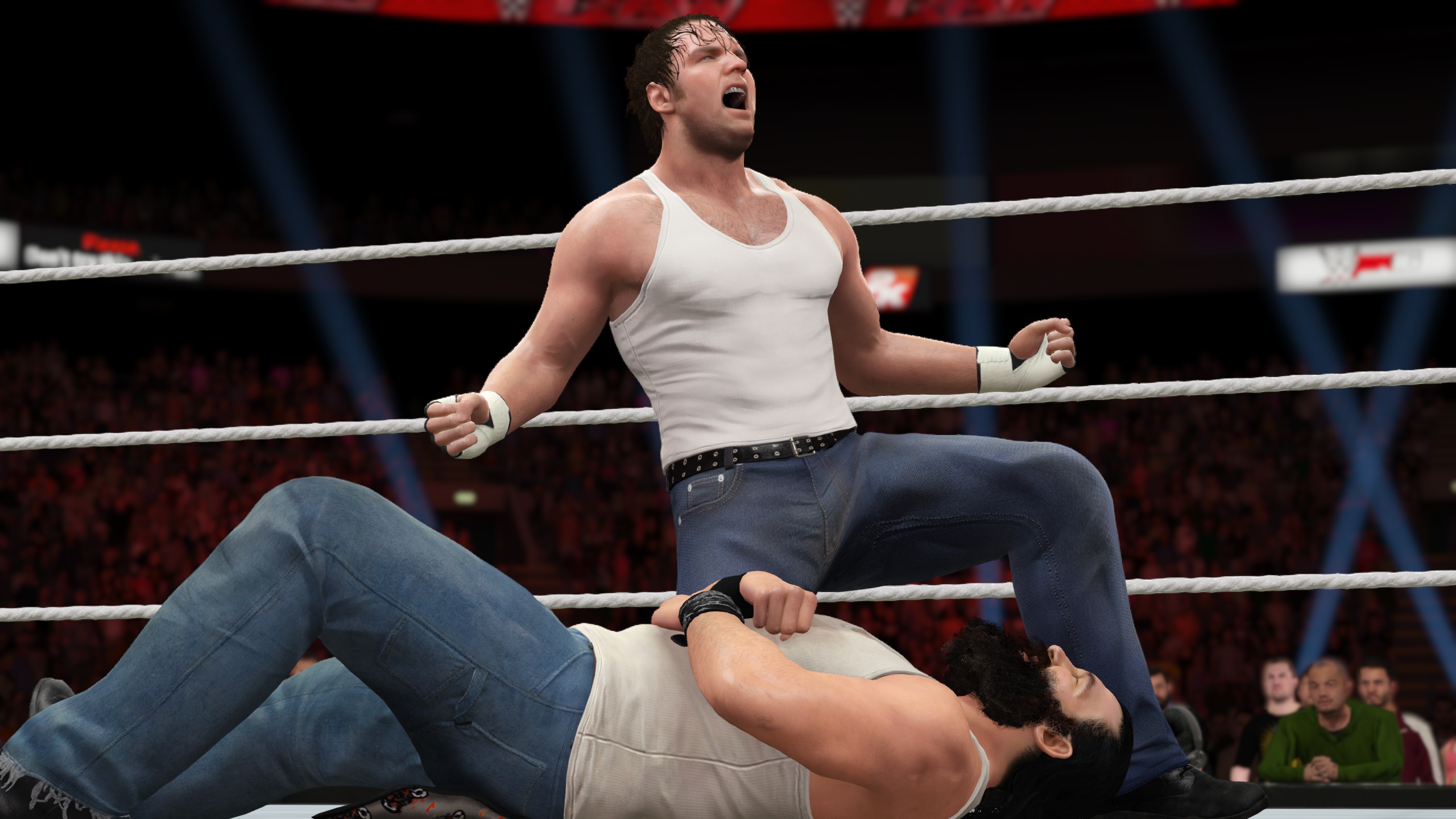 Wrestling fans have been waiting for a truly great game for their sport of choice for years, if not decades. All that waiting has mostly paid off as WWE 2K16 is a strong game that can stand well with the genre’s heavy-hitters without looking too out of place. WWE 2K16 isn’t without its flaws, but it’s the most feature-rich wrestling game to come along in a while, with a right massive roster, a good deal of likable modes and well-fleshed out main attractions in the domains of 2K Showcase and MyCareer.