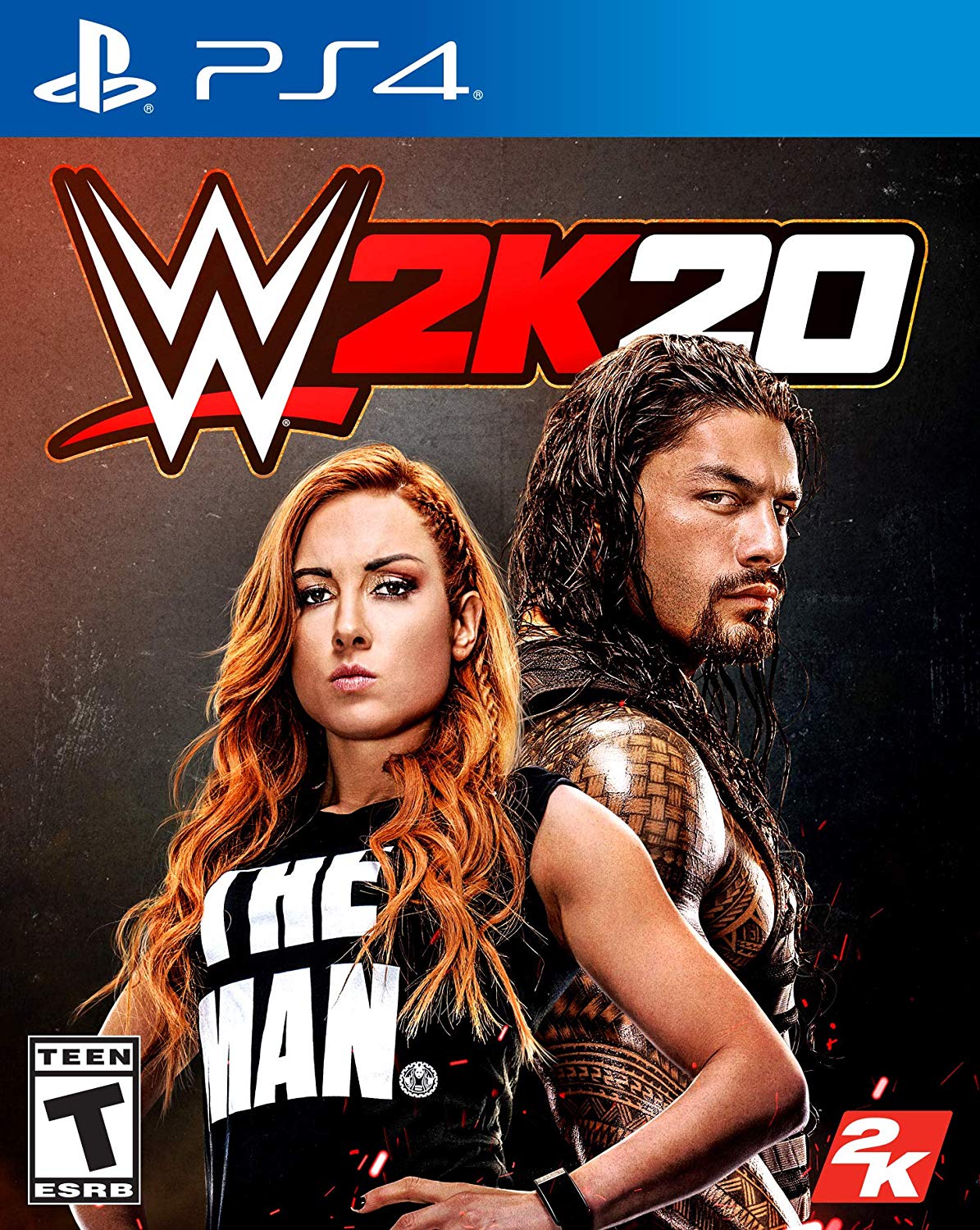 Visual Concepts has been at the forefront of some great sports franchises such as NFL 2K and NBA 2K and recently hopped on board with the WWE. 2K picked up the asset from THQ back in 2014 and eventually ushered out developer Yukes in favor of Visual Concepts. WWE 2K20 is the first release to fully feature Visual Concepts and the results are abysmal. The game still includes the fan-favorite modes that the series has come to expect, but it’s clear that the team should have taken a year off to fully develop something or even re-invent the gameplay. Instead, consumers receive a unplayable mess that can’t rest on its laurels.

On the surface, there’s still a lot here to offer players and most of these options have been featured in the past. MyCareer returns with a new story-driven game mode this year as you will create both a male and female MyPlayer to embark on both of their journeys together. The two are inducted into the WWE Hall of Fame and a lot of the story is recollection of what got them to this point. Red and Tre can be easily created much like last year and deeper customization can eventually be done. The MyPlayer Tree feels much more streamlined this year and easily accessible to level up each character. Players can also compete in Road to Glory and some 2K Towers to help gain more XP. The story itself deserves credit for feeling outside of the box as it clearly focuses more on Red and makes Tre mostly an accessory. There are still some good bonding moments and overall the story is fairly solid. It doesn’t beat the experience from last year, but it does a good job on paper. One of the more aggravating issues with the story mode are the amount of loading screens. It’s hard to get encompassed into the story when a minute-long loading screen pops up after a thirty second clip. There’s also the specific visual issues within the cutscenes but we will dive into the visuals soon enough.

Visual Concepts decided to focus on the Women’s Revolution this year which might be part of the reason Red gets more of the focus in the story mode. For the past few years, Visual Concepts has included a documentary-like mode focuses on the career of some superstars that includes videos much like something you would see on the WWE Network. You will play some matches and have to complete certain tasks within the match that mirror what happened in the actual match. It’s actually a great concept and the WWE Showcase this year features the Women’s Revolution and focuses on the rise to power of the Four Horsewomen from NXT: Sasha Banks, Bayley, Charlotte Flair and Becky Lynch. The mode starts off great but is basically left unplayable due to the nature of the issues in the game. The inability to pull off certain moves to advance the match, even if you pin for the win, doesn’t allow you to move forward with the story. The lack of a moves list for the individual Superstars is aggravating and even attempting to do what button setup the objective tells you to doesn’t work. 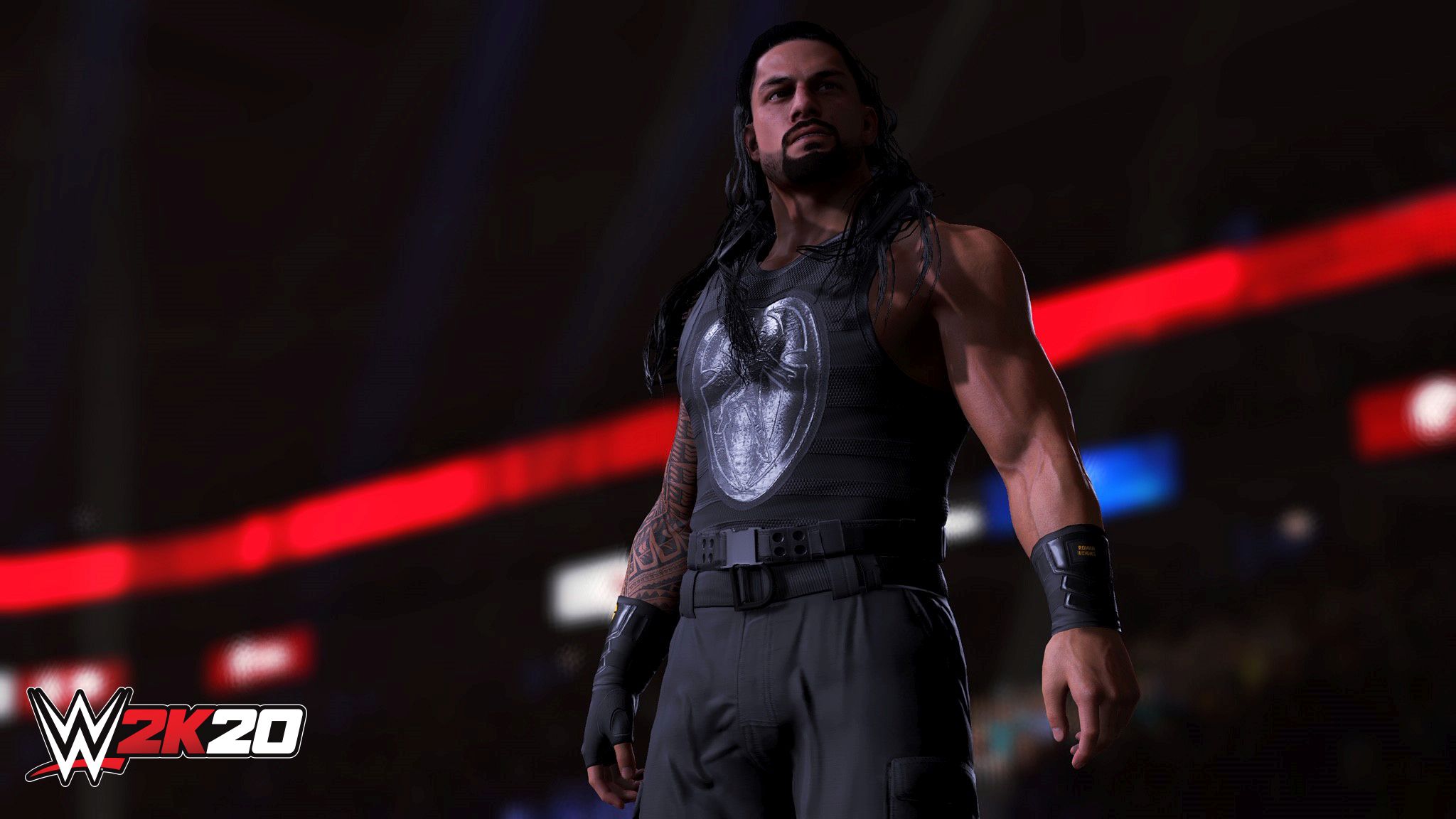 The mode that I enjoyed the most was the Universe Mode where shows are crafted from the ground up. Visual Concepts made this feel a bit more simpler to use this year and raised the cap on a lot of match variations and stipulations. The mode as a whole, however, needs to evolve. In the real WWE, squash matches exist as a way to try and get WWE Superstars over with the crowd. These matches shouldn’t all be five star matches that last an hour and if you have a Superstar that’s rated high taking on someone that’s rated low, that lower rated should not be reversing every single move. The flow of playing in the Universe Mode is off and this needs an overhaul. If you’re simply simulating through Universe, it’s actually one of the few bright spots in WWE 2K20.

2K Towers returns with a focus on the rise of Roman Reigns. These include videos much like the Showcase mode does and are a nice touch. There are varying towers but strangely, all of the male WWE Superstar towers have high difficulty levels whereas the females have the easier ones. These can’t be altered, either. This is the type of game where getting good isn’t necessarily an option this year as bugs will hold this back. Players can also do mixed gender tag matches this year, but cannot do a male versus female one-on-one. The towers do provide a different way to play and these will again be updated at some point.

What was announced to be brand new this year was using 2K Originals. This mode is supposed to bring a lot of horror-themed matches in varying locations to mix things up, which would have been perfect for Halloween, but is nowhere to be found. We were able to play this at a preview event a few weeks ago, but even days after release it’s still not available. What’s even more sad is that the most over Superstar in WWE right now, The Fiend, who is also showcased in the trailer on the main roster, isn’t available to choose as a playable character. We were told this at the event that he would need to be unlocked via one of the 2K Towers in this mode and at that point we were rubbed the wrong way. To make it worse, that mode can’t even be played and we don’t know when this will actually come out. It will probably be when no one is left playing the game. 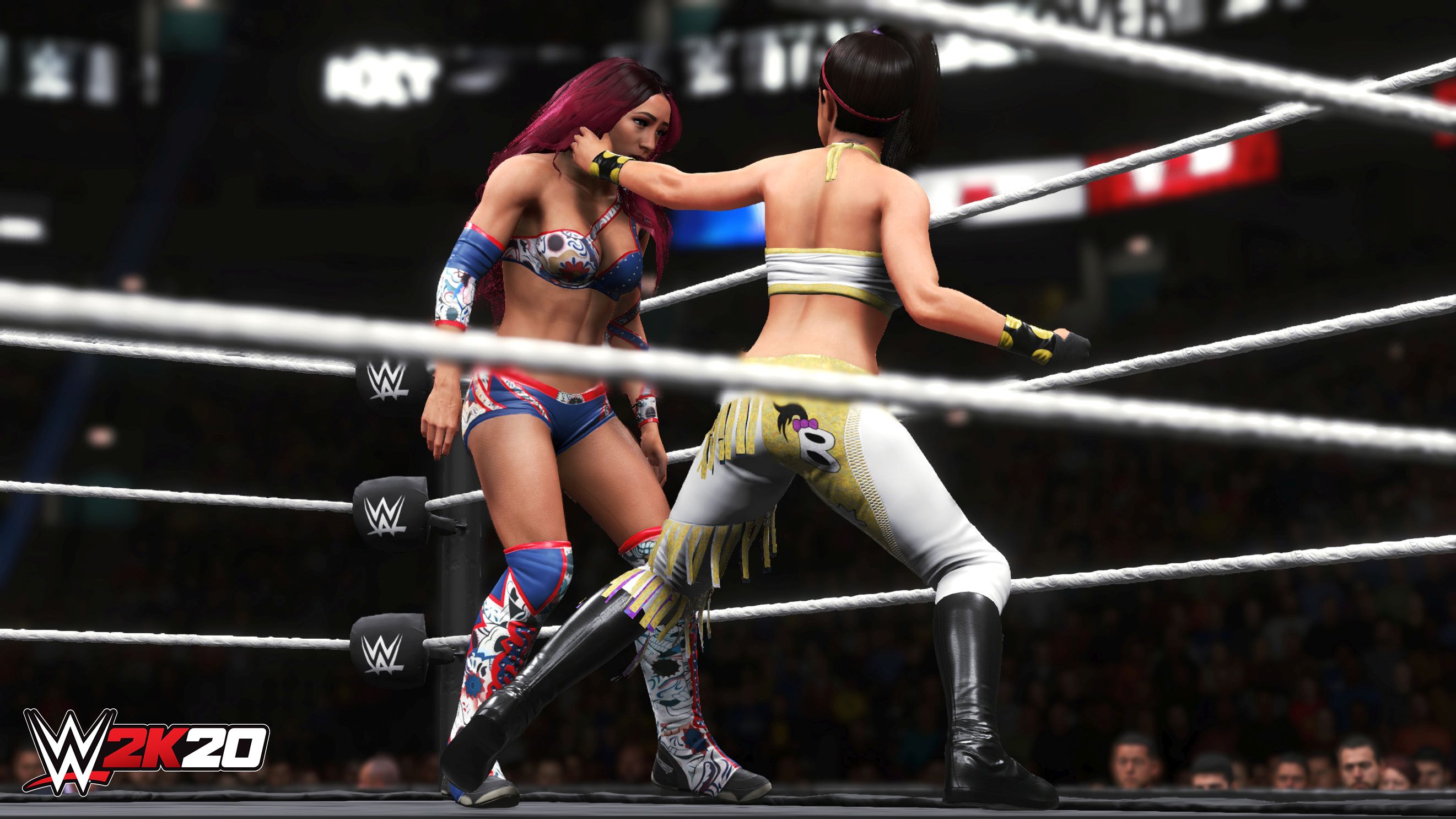 There are a few things at play that are swirling for why the gameplay and visuals are the way they are. Due to Yukes leaving, it seems that Visual Concepts didn’t have access to those assets and they had to cramp a lot of content in with a short staff, which is why taking a year off would have been preferred. The gameplay seems to be built off of PS2 architecture and at times feels like the wonky Smackdown games from the early aughts. Player collision is hit or miss in combat and you basically have to be lined up perfect to land a strike or hit a move. Visual Concepts remapped the buttons this year and it’s worth noting that reversals are easier to pull off. Signatures and Finishers now use two buttons and allow for some variations with the RT or R2 buttons on the controller. The submission system remains the same although a button system can replace the stick system and it is still frustrating.

There are too many complex control schemes to do advanced moves in this game. If I want to put someone through a table, I shouldn’t have to go through a maze of button configurations to do this. This has been a legacy issue, however. The AI is just in another world. The AI, no matter the difficulty level and player rating, reverses everything and doesn’t feel the punishment. There are times where the AI just stands there, gets stuck behind objects or goes flying off somewhere. Outside of the ring in Hell in a Cell is a no-go. Players do not easily face each other and do not react the say they should. If you attempt a match with more than two people in the ring, it’s just a complete mess as players get hung up on the simplest things. When you do manage to get a match to flow well with no issues, it’s almost as enjoyable as last year. There are some glimpses.

The visuals do have a handful of bright spots. The arenas look amazing along with the pyros. The player models, however, do not. Some top stars like Roman and Randy Orton look okay, but the rest are atrocious. The player models in the character select screen looks like police sketches by a rookie cop. It seems like most of the Superstars may have been created through the create-a-player and had assets added on that they could use. Batista and The Rock really look nothing like their counterparts. This is a stacked roster but it may have been worth toning the Superstar count back this year to have time to deliver a more relative appearance. Lastly, the visuals in MyCareer are some of the ugliest things this generation and that also goes for created wrestlers in general. Backlighting flickers in the cutscenes during the story and it just takes away from everything.

One good thing that WWE 2K20 has going for it is the sound. There have been many more added Superstar voices this year and you can hear certain voices during taunts. MyCareer will have new dialogue in it as well. The announce team is still much better than it used to be and it mimics a broadcast for better or worse. Every match opens up with a cringe Michael Cole quote just like you hear on television. There are about a few different announcers here and Graves and surprisingly Saxton shine pretty well. There’s new dynamic dialogue I hadn’t heard before and overall it does a good job of capturing what you see on television. Some of the timing is off and there’s some redundancy, but go back five years and fans would have killed for a deeper change like this. Lastly, playing online provides mostly a bad experience. It seems 2K always has trouble with online play but WWE 2K20 came off as mostly unplayable. If you have more than two people in a match, it will either run extremely slow or consistently hiccup. I had one good match going one-on-one with someone and it almost seemed too fast. There’s no entrances online, either, so if a created wrestler has something cool you won’t be able to witness it. There’s at least a lobby system but getting six people to sit around for more than thirty seconds to join a match rarely happens. 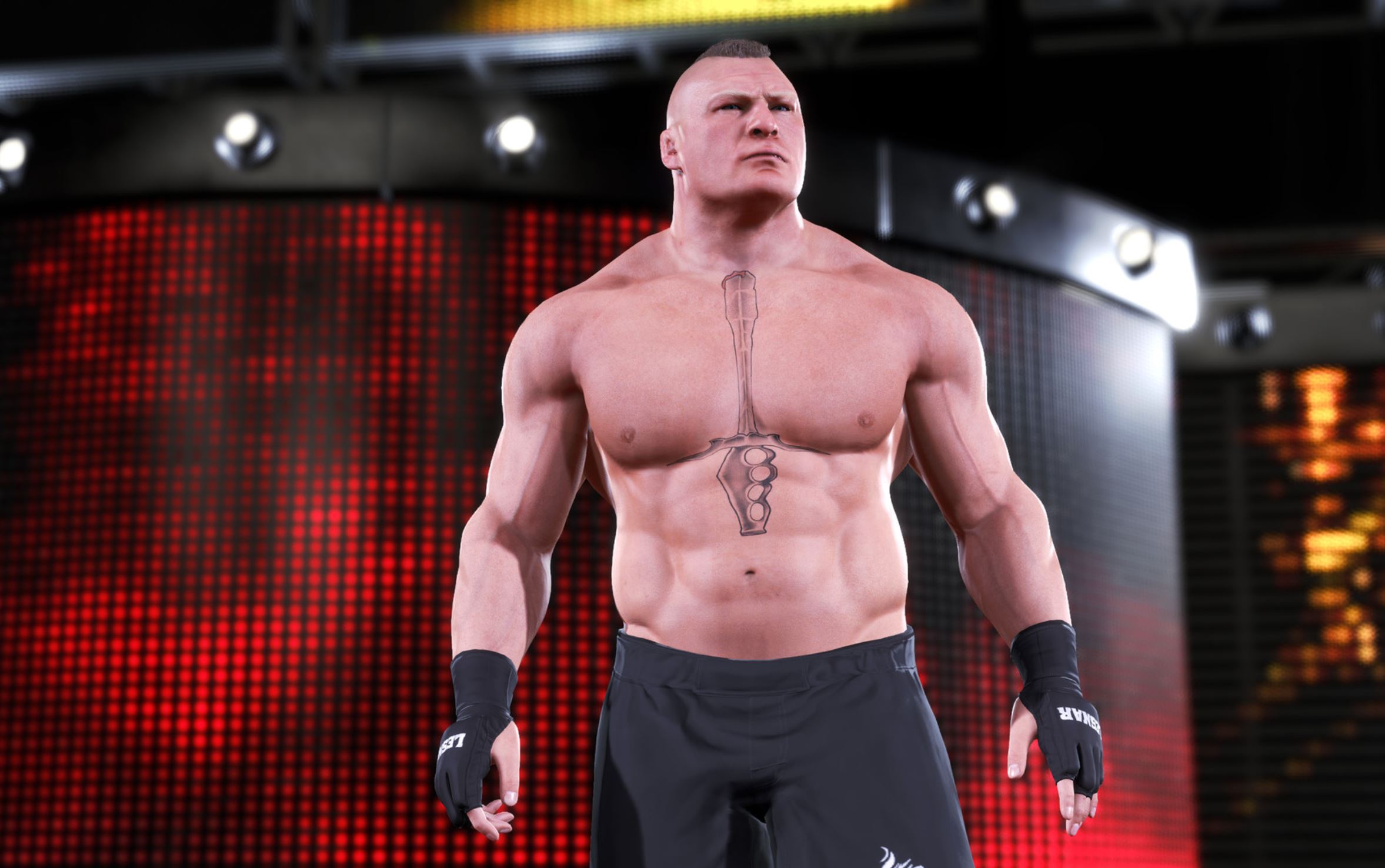 WWE 2K20 can’t be recommended in its current state and something like this should have never been released. There are less than a handful of bright spots and if they had just launched with 2K Originals and more importantly The Fiend, the most over WWE Superstar right now, it would have helped. What you get is a buggy experience and one glaring issue hampering an enjoyable experience in each of its different modes. MyCareer would be worth progressing through if you can stomach the awful loading times and Showcase would be great if the gameplay didn’t hinder actual advancement through the mode. In the end, it’s still a WWE game and Visual Concepts is promising patches. What really needs to happen is Visual Concepts needs to start building a new way to play with a fresh game to launch next generation. Something that has its own touch rather than a hand-me-down of Yukes. Visual Concepts needs to do some soul searching here and there is an opportunity to snap its fingers and start fresh.