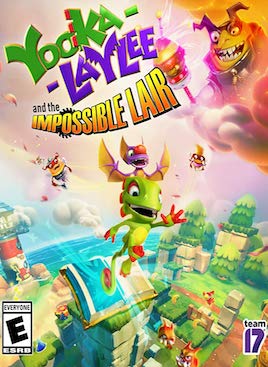 Yooka-Laylee and the Impossible Lair

As was touched upon at the start of our E3 hands-on with the game, to say one was unsure on a detour into 2.5D-platforming for Yooka-Laylee would be an understatement if there ever was one. Some brutal honesty: the announcement that Playtonic’s follow-up starring the anthropomorphized chameleon and bat duo in Yooka-Laylee and the Impossible Lair would be moving away from that 3D rekindling of past joys left something of a bitter disappointment. The 2017 original wasn’t exactly met with universal acclaim despite the scale of its anticipation prior to release, but Playtonic undoubtedly got many key areas to that beloved formula right. To see that not built upon — the focus this time on subtracting half a dimension and all-but-restricting the game’s intentions to a more linear assembly of levels to conquer — was a tad worrying for someone who could see more good than bad in the studio’s end result. Concern that, competently-made the twenty levels (or chapters as the game refers to them as) may be this time round, for all its structural design, it would work against the charm, wit and more importantly, recurring enjoyment the original sparked.

Fortunately that concern has been unwarranted. The 3D worlds may be gone, as are the duel dialogue boxes whenever two characters converse in that signatory jumble of gobbledygook, but Playtonic have delivered in translating their craft into the realm of 2.5D precision-platforming. The focus may be heavily shifted toward the levels as a result — elements such as dialogue, puzzle-solving and the simple innocence of exploring an environment, lesser in substance — that doesn’t mean that traces of the original’s best moments don’t find time in The Impossible Lair to pop up where it matters most. Barriers, referred to as “paywalls” that can only be disabled by way of collecting enough T.W.I.T. coins scattered about the game’s levels; self-deprecating jokes on not making the same mistakes as the first game; lines from certain NPCs that reference WhatsApp of all things; the all-too-aware and cheekily-acknowledged reliance on puns. The tongue-in-cheek writing is still here (as is the aforementioned gobbledygook of many a returning character throughout your adventures) but that isn’t the appeal this time round and on the whole, Playtonic’s end product this time round pays off to superb effect.

But it’s only when you finally jump into one of the levels — excluding the introductory/climactic titular Impossible Lair that players can access right from the word go should they so desire — do you appreciate the studio’s intention to narrow in on the joy of platforming and the satisfaction of reaching the end goal. While exploration of themain overworld does come into play at a frequent interval — some light puzzle-solving, shortcut-unlocking and general moseying-on from one overhead region of the map to the next, rarely absent from a player’s natural progression — The Impossible Lair‘s centerpiece is of course its 2.5D gameplay. Just like Donkey Kong: Tropical Freeze or the Donkey Kong Country trilogy for that matter (and honestly, there’s no shame in making that comparison, low-hanging fruit it may be), Yooka-Laylee and the Impossible Lair‘s tight level design, devilishly-placed enemies/pitfalls and suggestive alluring to secrets and collectibles alike is the main star here — proof enough that Playtonic haven’t simply reused assets or hastily retreated into a sequel of this ilk. 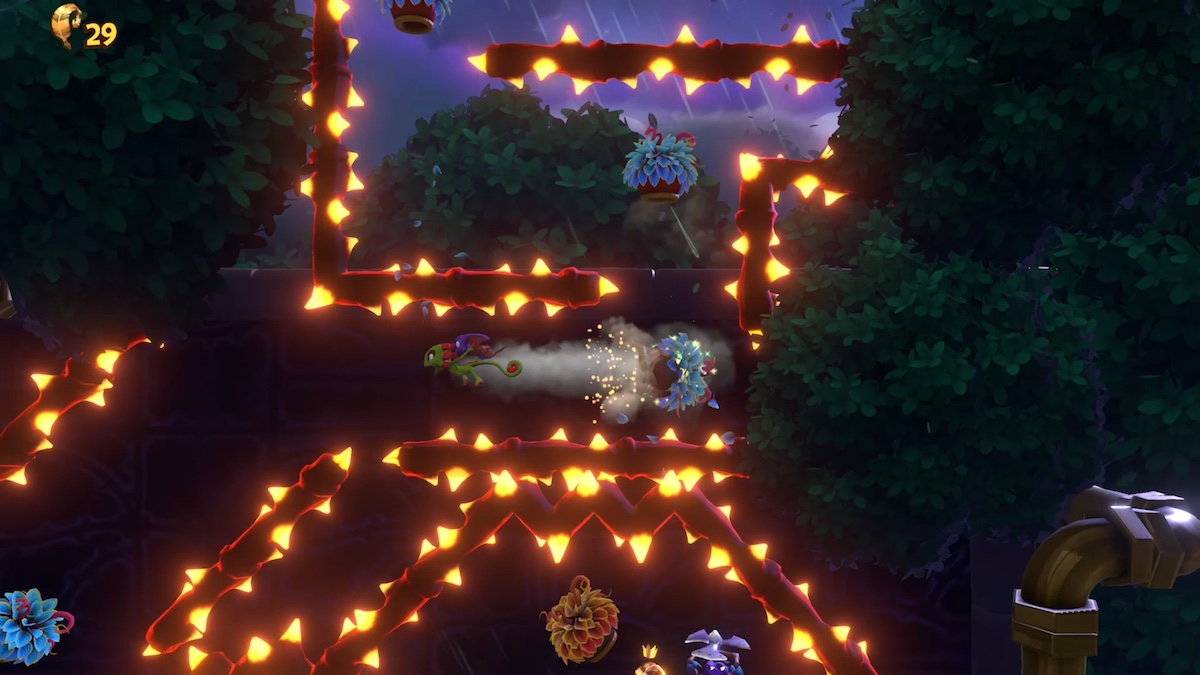 Perhaps the most surprising thing about playing through the multitude of levels — revisited once you uncover the means to alter their state — is how well Yooka and Laylee’s abilities not only fit, but serve the 2.5D approach. Even if the controls themselves may initially feel a tad stiff or simply not as fluid as you would have wanted or hoped for, The Impossible Lair offers enough of a conundrum in working out how best to move and out-maneuver the many traps lying in wait for these design decisions to make sense. One of the quill challenges — a series of five temporary challenges that pop up in each level — even tests its player’s knowledge of how physics and momentum play into proceedings, so as to follow a pre-determined sequence of collectible quills in the fastest possible time. In-level challenges and temporary opportunities that offer but a split-second to react are of course nothing new — and Playtonic are clearly taking many a page from what past Donkey Kong titles have mastered — but there’s still a decent chunk of potential replayability for levels to avoid becoming one-off segments.

Playtonic may not offer much substantially new to the template with The Impossible Lair, but that doesn’t mean there aren’t some neat additions that will garner a brief bit of strategic thinking above all else. Namely the introduction of collectible tonics that are scattered about the overworld, of which incorporate both gameplay-altering and merely cosmetic changes upon booting up a level. The catch, however, is that in selecting a tonic that, for example, allows you to glide for a longer duration or prevents you from having to acquire lost T.W.I.T. coins upon death, your end-of-level quill count will take a slight knock based on the overall multiplier. Certain tonics having certain multiplier levels that can mean your quill count reduced by half in some cases; the inverse of this being that if you can enable tonics that make levels a bit more challenging (enemies needing two hits to be taken down, for example), you get more quills as a result. Though minor, it’s a nice and surprisingly varied area of experimentation. 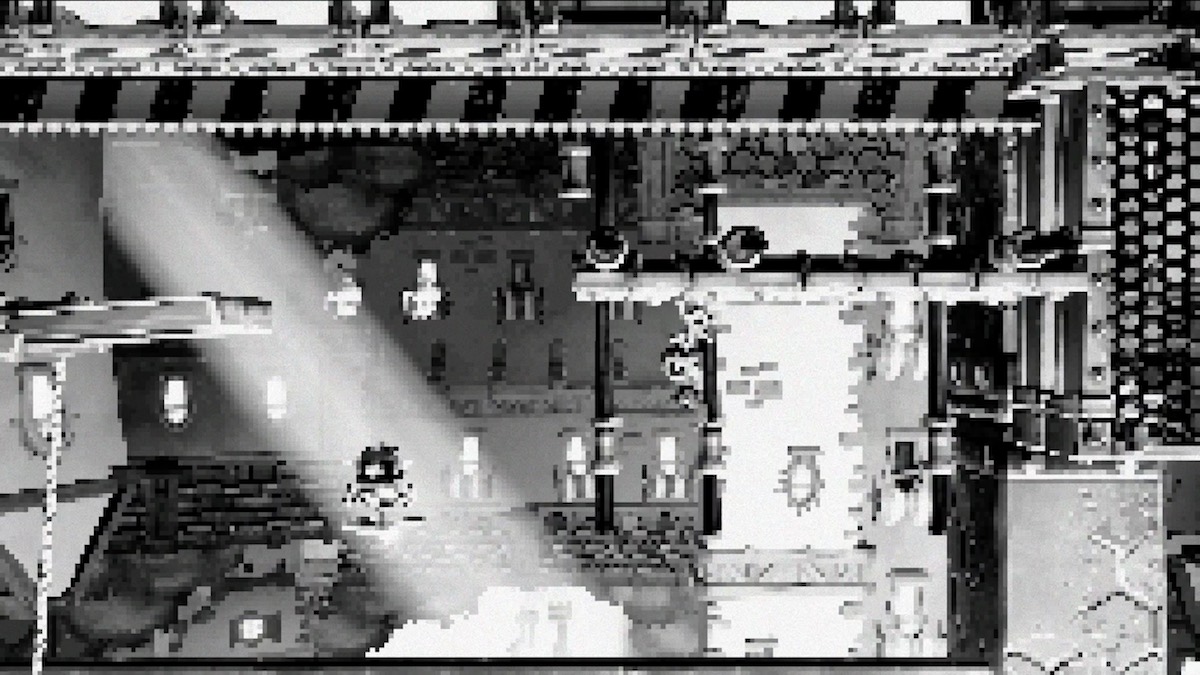 And that’s before taking into account the aesthetic-changing tonics which in all honesty have no right to be as fun and as time-consuming to dabble in as they end up being. Yet the fact is, Playtonic’s multitude of cosmetic alterations may well be one of the best things about this game, weirdly enough. There’s something so ludicrous, so “why is this even a thing?” and yet so delightful in seeing how far you can take things in stacking visual effects on top of one another. Particularly when, later on in your adventures, you unlock a fourth tonic slot (beyond the starting/standard three slots) and find yourself voluntarily not just revisiting a level, but revisiting a level except only now it’s black-and-white, has the resolution of a Game Boy screen, is upside down, finds your character with a big head, and to cap off the aesthetic runs at half the intended frame-rate of 30FPS. It’s dumb fun to mess about with and it just might be one of the best things about The Impossible Lair.

Crucially of all though, Playtonic take full advantage of both platforming’s collectible addictiveness and a player’s incessant need to get things perfect and it’s a mentality that runs through the entire ten-or-so hour run-time. Right down to the way certain platform types and environmental gimmicks come into play, a means to trip the player up if they’re not paying attention. Yooka-Laylee and the Impossible Lair won’t win any awards on its genre originality, but whether it’s the way stage variants wind in, out and back around to their original forms, how deliberately precise particular segments are orchestrated and of course taking that brief moment to spot something in the corner or the foreground that inevitably leads to a secret path. The game is chock full of these miniature, bite-sized moments of gleeful zeal and for fans of this brand of platformer, The Impossible Lair scratches that itch. The formula isn’t flawless by any means. Level difficulty fluctuating may be read as an entirely subjective perception, but Playtonic do unfortunately allow the occasional design decision to come off as misplaced.

For one, there seems to be an inconsistent approach to how the supposed “regular” route is presented to the player. For a game, like so many before it, that locks its players out of secret routes should they proceed through one door/corridor/drop over the other, it can get annoying when you realize that that previously-alluded branching path or hidden route was in fact the intended route all along. That the game is punishing you for both experimenting and taking the time to appreciate/question the level’s layout and intended sequencing of events. Certainly there are moments where Playtonic clearly do the opposite and actively encourage players to revel in Yooka and Laylee’s combined abilities to get to seemingly-impossible heights/areas — even if it is for a mere ten quills — but that philosophy, at its worst, feels inconsistent. Other slightly less-detrimental gripes come in the form of some occasional lack of detail in the levels themselves. An area The Impossible Lair is well-accomplished in for the most part, hence when backgrounds come off a little sparse or simply lacking the love and care so wonderfully demonstrated not a few minutes ago, the juxtapose can be jarring, if briefly. 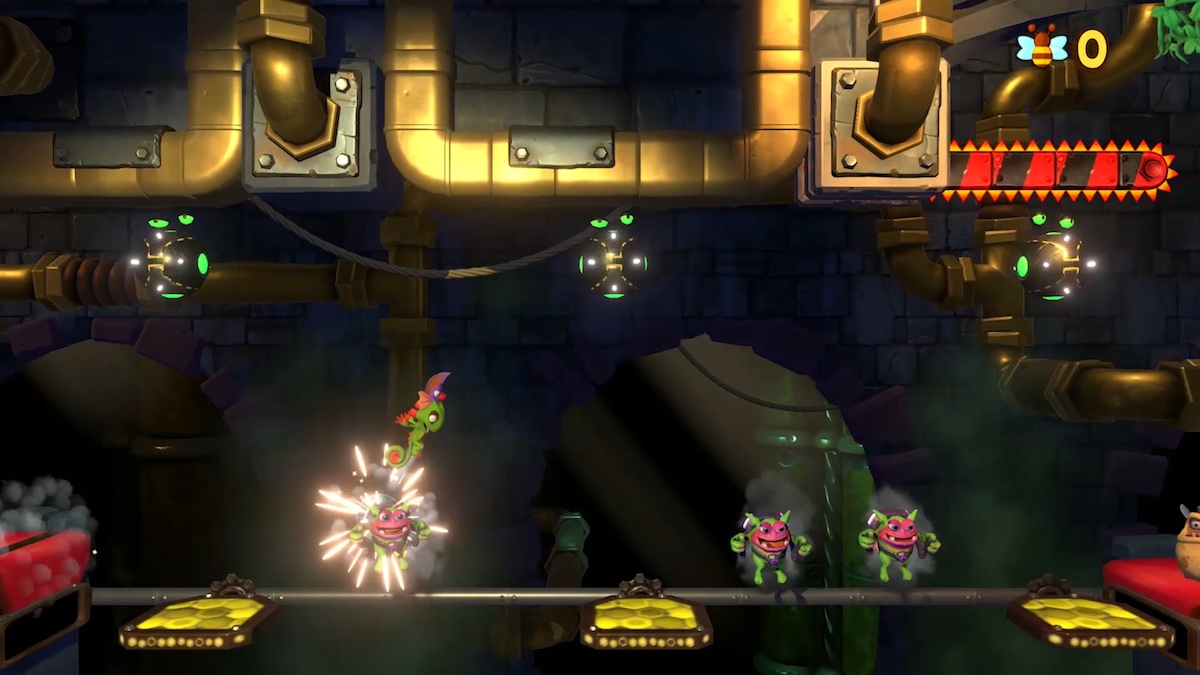 Delightful a package this ends up being — with a surprising glee to be had when it comes to fiddling about with the many game-altering tonics on show — it’s by no means an argument for Playtonic to ditch altogether the idea of revisiting traditional 3D for a hypothetical “Twooka-Laylee” follow-up. Regardless of how you define this game in relation to the original, Yooka-Laylee and the Impossible Lair may not be revolutionary through-and-through when it comes to its own rendition of 2.5D platforming, but the concise use of the original’s foundation prove Playtonic’s chameleon and bat duo can work just as well in the realm of side-scrolling as they do in their more explorative leanings prior. Arguably better. Above all else, that frequent encouraging its players to master the mechanics on offer, not to mention a welcome (if not focal) smidgen of that usual wit and charm in its writing to accompany, means Yooka-Laylee and the The Impossible Lair comes across as a well-tailored follow-up and enjoyable addition to the platforming genre.