Follow me for a moment: Ys I & II Chronicles+ is essentially the same game originally released on the PSP back in 2009, which was an enhanced re-release of the Windows Ys I & II Complete from 2001, which was a remake of the 1988 Japanese classics Ys I and II on TurboGrafx-CD, which were then released in 1990 in North America as Ys Book I & II, which was later re-released in 1992 as a pack-in title for the TurboDuo. Did I mention the games also appeared for the DS and PlayStation 2 in the 2000s? Because they did. Thus, If you were able to follow all that without your head exploding, well, good for you — that’ll provide some basis for the rest of this review — because essentially Chronicles+ is the same game fans have been playing for over two decades. That is both a great and awful thing — mostly the latter.

Ys I & II Chronicles+ is the epitome of a JRPG: there are clichéd characters, environments and plot points, dungeons to delve and that very familiar visit-a-town-learn-about-the-story-get-asked-to-clear-a-lair-of-monsters-bear-witness-to-a-story-segment-rinse-repeat feel to it. In truth, the Ys series is in part responsible for this formula, a formula that was probably very inventive in the late ’80s. By today’s standards, however, most gamers have been there, done that, and are looking for variety. As such, the person that will get the most from Chronicles+ is someone wanting a relatively untouched, throwback experience.

Chronicles+ follows the tale of Adol Christin, a young adventurer who one day washes up on the beach of a small harbor town on a small island. When he comes to, he is in the care of the town’s resident doctor, and eventually is nursed back to health. After learning of some weird happenings in and around the town, Adol makes off to figure out what’s going on. From there, it’s a traditional tale of a young boy taking on large evils and even larger obstacles. While this is how Ys I: Ancient Ys Vanished begins, both I and II are mostly connected to one another, with the second game continuing the story of the first’s hero. The stories in both games are well-told, and have a distinct level of intrigue, especially at the beginning when Adol and the player are oblivious to the real threat emerging. In this regard, Chronicles+ is something of a solid storyteller. Regardless of how well-paced the games are in terms of narration, however, there are points in the plot when events simply fall flat. I can only imagine this is because the twists and turns of the story have all been done a hundred times over since the games’ original releases. Hence, what was once probably extremely creative, ultimately feel eye-rollingly predictable and trite.

But RPGs aren’t all about the tale being told, they’re just as much about the combat. Unfortunately, this is where the game feels extremely unfulfilling. While later Ys games would employ a very hack ‘n slash combat experience that was frenetic and button mash-y, Chronicles+ uses a “Bump” battling system. Like a typical action-RPG, players do battles with enemies in real-time, no combat screen or segment to be transported to like in many turn-based JRPGs. In this way, when an enemy is spotted, players can bum-rush them with Adol and start attacking. There’s a caveat to this, though: players don’t actually input any commands to wage their assault — they just simply run into their opponent, and Adol auto-attacks.

While this doesn’t sound so bad, it’s made horrible by the lack of attack animation, and the fact that, to not take damage when doing this, players have to line up Adol so that he runs into the enemy at a perfect angle as to not get hit himself. As a result, running into an enemy’s back or side are viable options, except they’re not because monster’s usually quickly turn to face Adol when he approaches. This leaves the other means of attack: run at the enemy and hit them just left or right of center. In doing this, players will deal damage, but avoid taking any themselves. From there, it’s just a matter of continuing to press whichever directional key is needed to continue running into the foe until they explode into pieces (yep, that happens too). This would probably be somewhat bearable if the controls were precise, but they’re not. So while the developer calls this a “Bump” system, I can think of a much better four-letter word that accurately describes it, but I digress. That aside, and in case it went unnoticed, this system is terrible, not fun in the slightest and simply antiquated. The fact that there isn’t much in the area of character growth and customization does nothing to help matters either. Fortunately, a magic system is introduced in Ys II that remedies some, but not all or even most, of the first’s combat woes. In fact, Ys II is the all around better game in the pairing.

So, make no mistake, this is a game that has been mostly untouched and unaltered since the 2001 PC remake. Unfortunately, that iteration did nothing for the awful combat, but it did ratchet up the game’s presentation. Though the title’s core design is very 1980s with character and monster designs likely to not impress, the redrawn sprites most certainly will. Character models are big and vibrant and animate extremely well, even if said animation is limited. Nevertheless, the game can be played with a few different viewing and resolution options which further enhance how great the sprite work looks. The character portraits look especially clean, regardless of the resolution. Too bad the same can’t be said for the first game’s text which can look a bit blurry at times.

Perhaps, Chronicles+ most brilliant aspect, though, is its wonderful soundtrack. Not only does it incorporate some of the series’ most breath-taking, moving pieces, it is a top candidate in the entire JRPG genre for similar accolades. Catchy, heart-touching melodies will brings gamers to their knees during the story’s emotional highs and lows, while the driving, guitar-laden rock anthems will keep feet tapping during tense segments and combat situations. In truth, I can’t speak highly enough of the soundtrack, it’s just beautiful. Unfortunately, not all the audio is so fantastic. Players will constantly run into sound dropout, especially during talking scenes, and looping tracks will be sure to annoy some of those out there who are attuned to such minor matters.

Aside from the core elements of Chronicles+, there’s a number of small additions that are admirable and appreciated. For starters, the game supports Cloud syncing, leaderboards and Steam achievements. A selectable soundtrack option exists as well, allowing players to rep the original 80s FM-synth OST, the early 2000s MIDI-style remix or the more modern studio performance by developer Falcom’s in-house rock band. There’s also the ability to use the ’90s-style character portraits or the more modern anime designs. On top of that, there’s four difficulty levels to choose from, and an optional boss rush mode to keep players coming back long after they’ve finished up story mode. There’s even an opportunity to use the decorative screen frames seen in the earlier Japan-only Ys I & II Complete Windows release, in addition to the more contemporary full-screen viewport seen in the PSP port. In this regard, publisher XSEED has really gone to great lengths to enhance the player’s experience where they can. 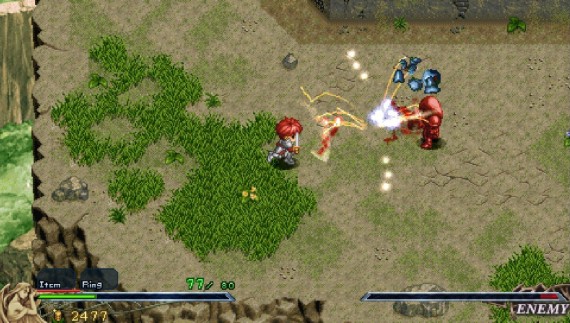 When all is said and done, though, the most critical mechanics of Ys I & II Chronicles+ feel antiquated and hardly enjoyable. There’s a solid, albeit clichéd, story to be told, gorgeous music to hear and a whole host of options to fiddle around with, but that’s where Chronicles+ stops impressing. Therefore, the game can only be recommend to two groups of people: diehard fans of its series and genre and folks who want to see how far video games really have come in the past 25 years. Everyone else should probably steer clear. The simple truth is there are better Ys games out there, ones that are already on Steam even. So check those out long before Chronicles+.