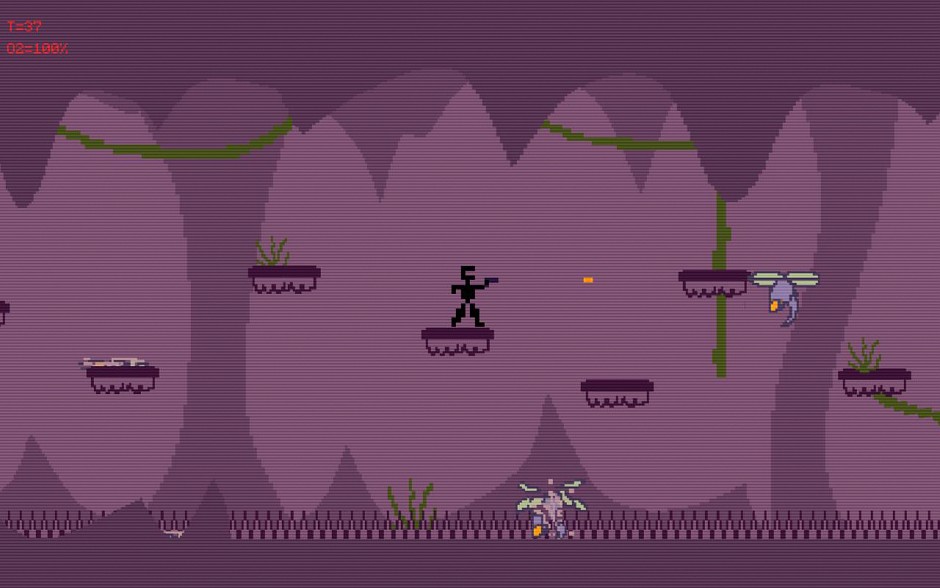 Did you just play 1001 Spikes and find that it wasn’t hard enough for you? Are you in the mood for another pixelated platformer that seeks to frustrate? If so, then it might be worth taking a look at Yury. This indie title pits players against copious amounts of spikes, snake enemies, and their own persistence to make it through. Of course, it takes a lot to make platformers addictively fun versus purely frustrating. Yury seems to fall somewhere in the middle.

Players are granted only the slightest storyline upon launching the game. An introductory cutscene shows you as an astronaut who races toward a red planet. Once there, they drop out of their ship and begin exploration of the alien landscape. Unfortunately, the world is entirely inhospitable. There are lava flows that burn you to a crisp and strange aliens that kill you upon touch. Then there are spikes the line many walls and floors for no other reason than to poke holes in your spacesuit.

Touching spikes won’t immediately kill you, but it does cause (almost always) fatal harm. Once you’ve been pierced, your internal supply of oxygen rapidly decreases. This grants players around ten seconds to rush around in hopes of finding a save spot. These are denoted by rotating cubes and are a huge relief to activate. Of course, most of the time when you see your air racing toward 0% it becomes hard to think with a clear head. Usually I ended up running about in a panic instead of doing anything useful before my astronaut’s umpeenth asphyxiation death.

As far as platformers go, it might seem like Yury isn’t too different from the rest beyond this air meter feature. Even the artwork is pixelated like so many games of the genre are. However, this one doesn’t seek to replicate NES-style graphics. Instead it pushes further back to Atari and Commodore era visuals. This is really fun to see since most games opt for 16 or 32 bit art when trying to be “nostalgic”. There are some flourishes which seem a bit too modern for the timeframe, but otherwise, it looks just like it came out of the 80s or early 90s.

Where Yury starts to exhibit some issues is in the one place you would most hope is unblemished – controls. Your astronaut doesn’t move with tight precision. Instead, they move with incredibly floaty style. This leads to things like landing on a platform and sliding off it immediately after. Even though you can stop pressing the left/right keys prior to landing they still have some propulsion and will screw up landings. With jumping on small platforms being such a huge part of the experience, you’ll experience many failed jumps before finally coming to grips with the imprecise controls.

Some players may like the added challenge of battling with a control scheme, but most incredibly tough platformers are at least fair in this regard. If it weren’t for the controls though, Yury would be a much easier game. But since your astronaut goes slipping around everywhere you end up spending many more attempts to make it through average platforming sections. Thankfully there is a reset button to quickly restart after realizing you’re going to die. Sometimes you might need to reset due to glitches, which occur from time to time and can severely mess up an otherwise good run.

Although the gameplay and level design leaves something to be desired, it must also be recognized that the game is an incredibly cheap buy at $2. By tempering expectations somewhat, Yury provides what you expect from a difficult platformer. It will make you die a lot and curse at the screen. Just note that if you’re looking for a ridiculous platformer with long-term appeal that there’s already a very large, more worthwhile selection of titles available.