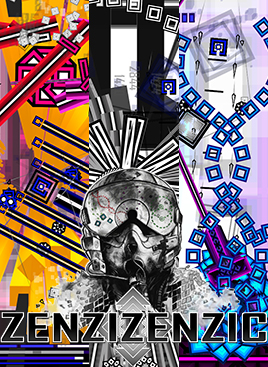 Squares are jerks. Four perfect ninety degree angles, each side exactly as long as the other, sitting there all superior on the screen just because they’ve got one more side than a triangle. How do you fight back against that kind of geometric arrogance? With the most heavily-armed counter-square available, of course. Zenzizenzic is a mathematical word meaning to square a square, obsolete because you don’t need fancy words to say “to the fourth power”, making it perfect for a game about a square shooting square enemies in worlds and levels blanketed by square bullets, powerups, obstacles and just about anything else that can crowd a screen with colorful, intricate death and opportunity.

Zenzizenzic is a twin-stick shooter that’s two games in one.  Classic mode is a combination arena/vertical scrolling shooter, each level and enemy hand-built, complete with bonus area and a boss at the end.  Macro, on the other hand, is more of a free-roaming roguelike affair with RPG elements.  They’re very different games that use the same mechanics, and together they’re a giant meaty package of twin-stick goodness.

Classic is the place you’ll want to start, because the score you earn in it is used to buy new game modes and special weapons that are permanently available in either mode. The game starts with, predictably, level 1 being the only one available, although all difficulty ranks for level 1 are open.  The secondary weapons of lasers and missiles are also unlocked, but everything else you’ve got to pay for.  New levels, weapons, modes, and boss and bonus level practice all cost your cumulated score, but nothing is overwhelmingly pricey once you start learning the systems and racking up the points.

Your little square ship is loaded with firepower in a variety of forms.  You don’t need to learn all its systems to survive but if you want to pull in the respectable scores there’s a lot to take advantage of.  The starting gun fires at a brisk pace and powerups come quick.  It doesn’t take long to add spikes, homing missiles, and a powerful orb shot to the main gun, all firing at once in a focused barrage.  The ship moves at a comfortable pace but also can speed up for zippy maneuvering or slow down for precision dodging, and the change in speed also effects aspects of the main gun.  Speed up and the spikes focus to a pinpoint while the orbs zip across the screen, slow down and so do the orbs.  That feature becomes a major advantage for the tougher enemies, because orbs keep on moving at a steady pace doing constant damage to anything they touch rather than dissipate on contact.  It can be just as useful to put a few orbs inside a big miniboss as it is to pelt them with secondary weapons. 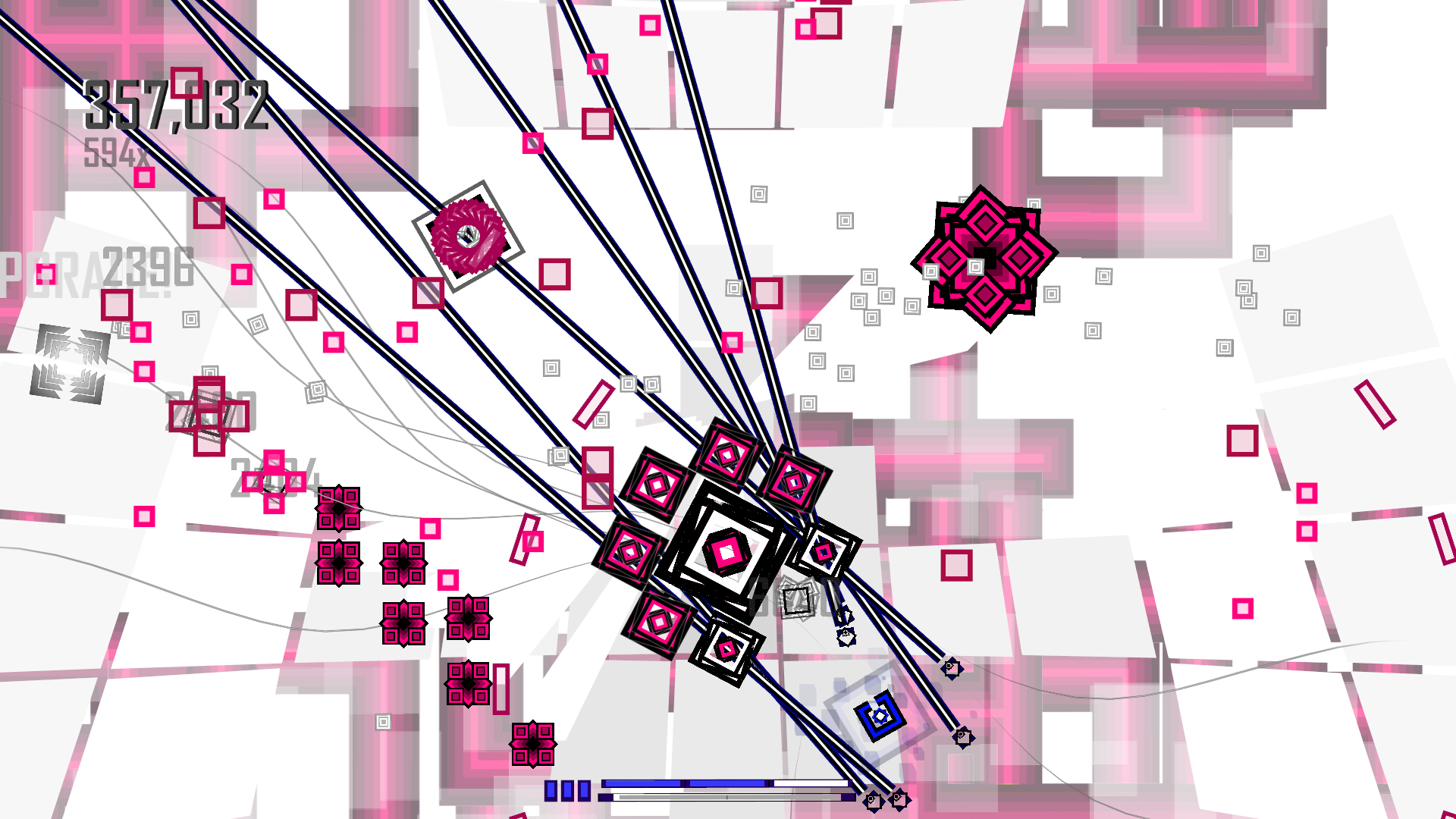 You can carry two additional weapons into the level, chosen from a selection of six, and they range from very simple to fairly complex.  Homing missiles take care of themselves, lasers go where you point them, but Time Jump slows down the action while you move a target to a safe point, letting you teleport there and releasing a small bullet-clearing explosion on arrival.  Charge shot sounds simple enough but is actually a two-stage attack.  Hold down to build up the shot size, let go to send it flying, and then either leave it alone to move across the screen damaging anything it touches or shoot it to cause a bullet-canceling explosion.  Black hole is a variation of the charge shot that’s even trickier to use but with massive scoring potential as it sucks in all bullets and uses them to power a massive shockwave.

There’s no question that, with all those options, Zenzizenzic can be a beast to learn, and that’s not even taking into account the choice between keeping a shield or blowing it up to clear the immediate area of surrounding bullets, plus taking advantage of the split-second overlap in the timing between the shield dissipating on taking a hit and still being able to use its explosive capabilities.  There are endless little strategies built into what’s normally a simpler type of game more reliant on fast reflexes than deep mechanics.  The standard arcade twin-stick tends to rely heavily on enemy behaviors to complicate life for the player, rather than a deep control system, but Zenzizenzic loads on the tools and lets the player learn how to use them.  You can get by just shooting, at least on Normal difficulty, but once you start exploring the options you can get to work taming the harder difficulties.  Also, thankfully, you can let practice enemies loose on the weapon select screen to test things out and practice technique in a far less threatening environment. 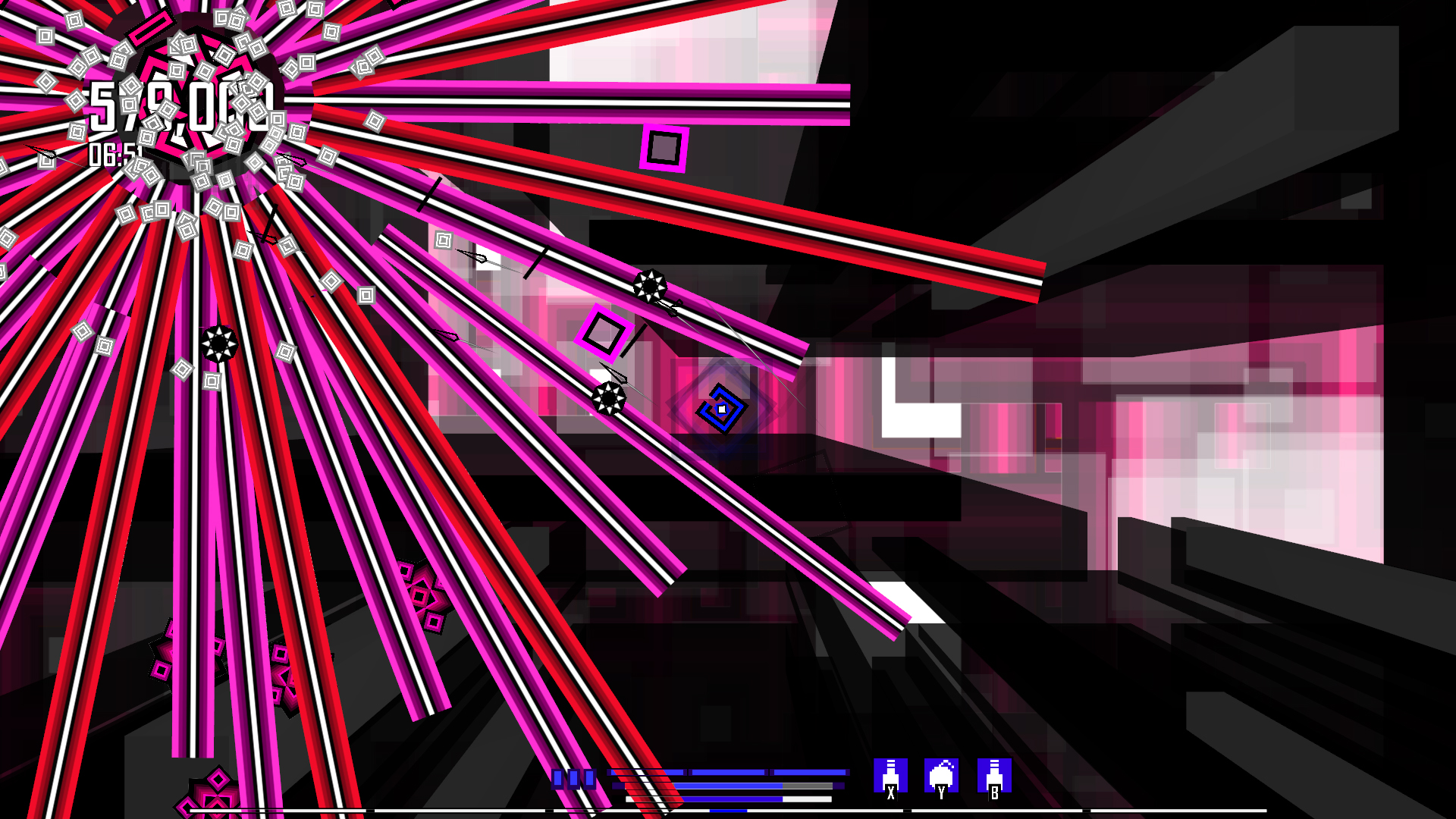 Once you’ve gotten a feel for the controls it’s time to tackle the levels, and they fill up with enemies and firepower fairly quickly.  Each of the levels in Classic mode is hand-crafted, no randomization, and the five levels come in Normal, Hard, and Very Hard difficulties.  The ratings aren’t kidding, either.  Normal is a nice challenge, Hard gets tricky fast, and Very Hard isn’t shy about cramming the screen with as many enemies and bullets as possible.  Each of the levels has a theme color and enemy type, with level 1’s simple bullets getting joined by lasers, homing missiles, and enemies that drop deadly movement-limiting walls.  There’s a strategy for every situation, though, and no hit is unavoidable.

Once you’ve gotten some practice in on Classic, using the points to unlock a few new weapons, Macro mode is ready to provide a different kind of challenge.  Macro is set up in the style of a rogue-like, with the ship spawning in a safe room near a few powerups and a procedurally-generated world waiting outside.  Powering up the ship involves taking out waves of enemies, spawning a chest which drops weapon and stat powerups when opened, and also spending the score at shops scattered throughout the world.  Every possible stat is upgradeable, from individual weapon components to the percentage of critical hits.  The shop only lets you upgrade so far while dropped stat boosts stack forever, but the game is tuned so that you’ll never be an overwhelming force.  Each stage of Macro is set to a timer, counting down to a giant boss encounter, and the stages are themed to the style of the Classic levels.  Stage one is enemies and bullets, stage two has lots of lasers, etc.  Each section also has a recognizable feel, with stage two’s cramped corridors being very different to stage four’s open layout or stage three’s treasure chest chambers.  Each run is randomly generated on the fly, but there are recognizable patterns in the randomization to take advantage of.  Macro makes an excellent counterpoint to the rigidly structured Classic, and I’ve played both modes an equal amount just for the fun of variety. 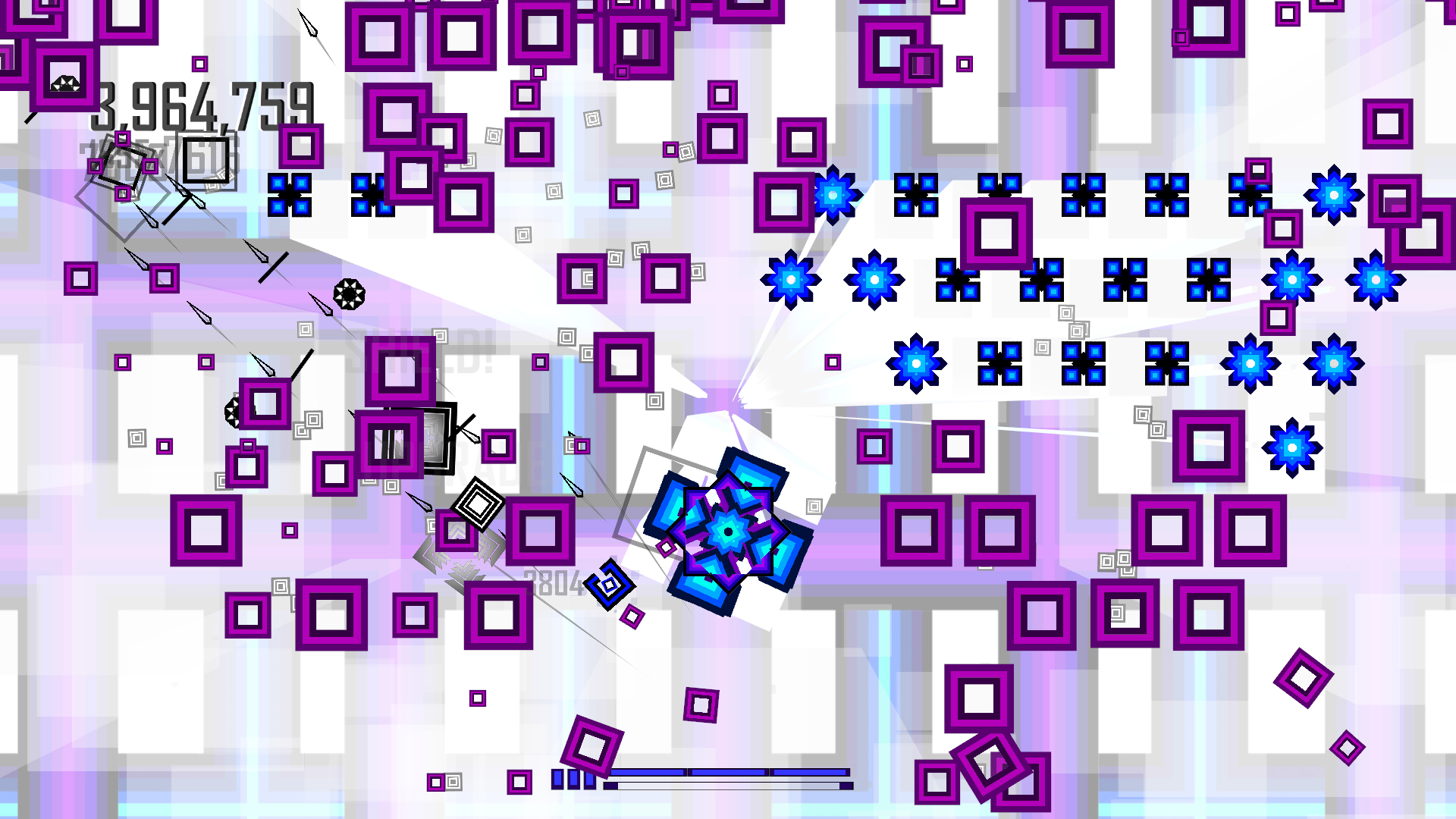 Zenzizenzic is a massive dose of twin-stick action, demanding a learning period to master its systems, but rewarding players with a finely tuned machine of destruction for their effort.  The various weapons and tools fit together perfectly, but the game never becomes a pushover even with the knowledge of how to use all that power, or even anything less than major challenge on the higher difficulty levels.  The two main modes complement each other nicely, making it easy to keep on playing when one mode needs a break.  Zenzizenzic is a beautiful, fun and deadly shot of abstract twin-stick bullet hell madness, but with a little experience and a lot of technique, the massive firepower coming your way turns into a bullet-filled playground of fantastic precision gaming.