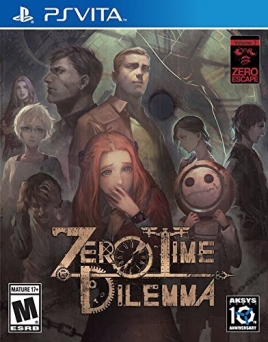 Fan-demanded sequels and spiritual successors are a tricky business. Sure, enough passion from the people who loved previous games helps new installments and continuations get made, but it also ensures that expectations are incredibly high from the second the new game actually begins production. Now, obviously we currently have a two-ton elephant in the room falling under this category going by Mighty No. 9 that everyone can’t stop staring at, but this means that less attention is being given to the smaller, one-ton elephant also in the same room (which is apparently a rather large room) going by Zero Time Dilemma. The third entry in the beloved cult franchise that is Zero Escape was made almost largely thanks through the support of fans through the “Operation Bluebird” social media campaign and various other means of encouragement, meaning excitement levels have been high for quite a while now ever since the game’s official announcement. So now that the day of judgement is here, does Zero Time Dilemma live up to the legacy of its predecessors?

Zero Time Dilemma opens with nine characters in three groups of three people each in jail cells, being addressed by a man in a plague doctor getup simply known as Zero, per tradition (Zero II, in this case). The first thing he does before announcing that he’s forcing these people to play a game is have them bet on a coin toss. If they guess right, they all go free. If they guess wrong, they’re thrown into a bomb shelter below a research facility in the desert and forced to have a little murder party. This is where the first actual gameplay comes in, where you have to guess what part of the coin will land right side up. Bracing myself for whatever happens next, I made my choice, and…the side I picked was correct. And after one dose of knockout gas and memory-erasing drugs, the cast was released from the facility, free to leave, and the credits rolled.

Huh. Well, that was easy! 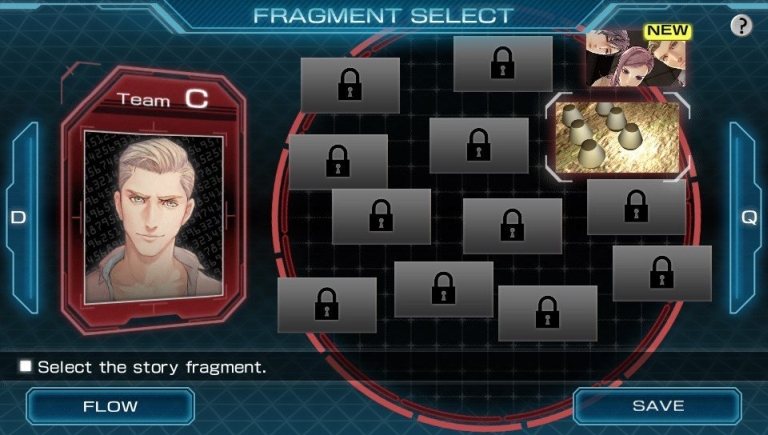 Despite Zero Time Dilemma’s rather surprising short length, the glimpses of story we do get are quite intriguing, and the interface is easy to maneuver, so in conclu…hmm? I can just jump back to the coin flip now and choose that to get the other parts of the game? Oh, well, I beat it already, but okay.

Yes, where previous games Nine Hours, Nine Persons, Nine Doors had the Nonary Game and Virtue’s Last Reward had the Ambidex Game, Zero Time Dilemma has the Decision Game. You control the game through the viewpoints of three different characters designated the leaders of each three-person team – Carlos of the C-Team, Q of the Q-Team, and Diana of the D-Team – are trapped in three different areas of the shelter, and your first major decision after the coin toss is having each player vote for which of the other teams should be executed. After that, the game takes place in ninety-minute segments, each ending with the teams getting knocked out with an injection of memory-erasing drugs via their bracelets, assuming they haven’t perished yet.

And perish they shall! Much like Virtue’s Last Reward, you end up having to explore multiple timelines in search of a way to escape, as well as ways to find answers for exactly what the heck is going on and information to use elsewhere. The story plays out over a set of the aforementioned ninety-minute fragments, several of which are available at the beginning and the rest you have to unlock by playing through the others. You can skip to any unlocked fragment at any time, which makes for some intriguing gameplay as you attempt to understand how everything connects together and what moment belongs in what timeline, piece by piece, until you can find a way to reach the best ending possible. 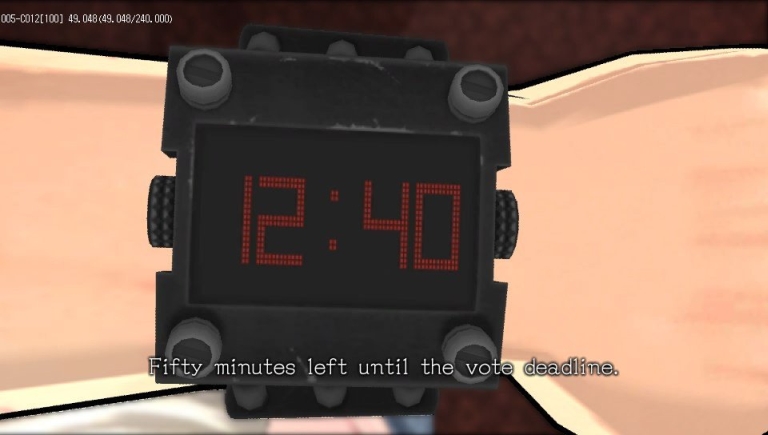 While it is a slight twist on the formula and a novel idea, and a highly enjoyable one at that, I can’t help but feel like the ability to skip around whenever you what undermines Zero Time Dilemma’s whole “Choice” angle a bit. The Walking Dead has been mentioned as a major inspiration for this particular installment, but whereas in that game you traveled along a single path and had to gradually learn what the impacts of your choices were (the choice where you have to decide whether or not to steal from a seemingly abandoned car and what results from it being a particular highlight), it’s kind of hard to keep the same impact with your choices going when you can just immediately rewind afterwards and pick the other option (such as not pressing a button that previously killed the entire team), or try out a different timeline entirely. Also, I can’t help but feel like some these “Choice” sections feel forced, in particular one where you have to type in an answer to a question that serves as the game’s most annoying puzzle, and actually had me cursing at it.

That being said, the first-person puzzle rooms are back in force, as our doomed contestants have to escape another variety of them, and they are quite well-crafted as usual. Each one has a wide variety of different types of puzzles to test your mental might, and each are particularly tough but fair for the most part. The developers clearly had a lot of fun here, going into secret codes sent via dolls, ancient calculating systems, forced perspective bits, Monty Hall dilemmas, and more. The feeling when you successfully escape each room is highly satisfying, and hey, any game such as this that requires me to start taking down actual physical notes gets a check mark for a sign of a good challenge.

So the puzzle rooms are just as enjoyable as they were in the previous games, and look particularly nice, if not outstanding, with some good 3D graphics that get the job done. Too bad the same can’t be said about the characters actually inhabiting these rooms. Spike Chunsoft, you should be sending a thank-you note to Comcept for drawing attention away from you, because this is some weak work here in the character design area. The Walking Dead’s cel-shaded style was an inspiration towards the graphics in Zero Time Dilemma as well, but compared to the vibrant 2D portraits of the last game, it clearly was not the way to go here. Character animation looks incredibly stiff and awkward, and each member of the cast has about two expressions at best, leading to moments where they react to one of their friends being brutally hacked to bits seemingly with the same face they’d use to express disappointment with a fly in their soup. And while the soundtrack is enjoyable as always, maybe giving characters like Zero a full-on deep Jigsaw voice this time around wasn’t a smart move, since they actually get drowned out a bit at times (subtitles are a must). 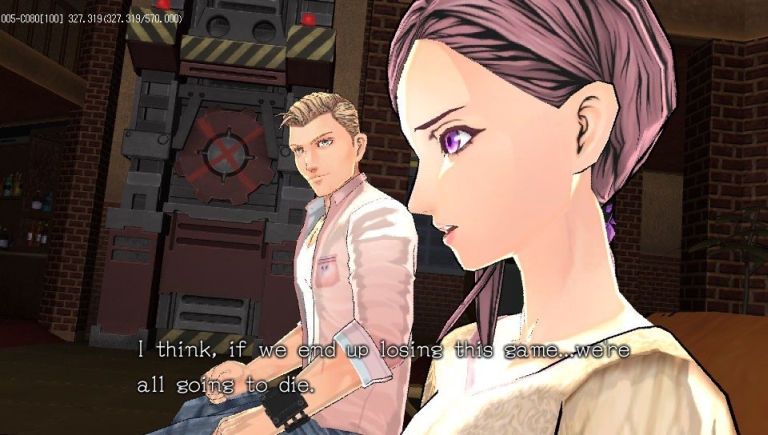 But only a fool judges a game merely by its aesthetics, and aside from the general puzzle-based gameplay being as solid as always, the story in Zero Time Dilemma is captivating as ever…and also makes for a really, really difficult review again, since much like the previous games, you can’t discuss too much of it without venturing into spoiler territory. Heck, thanks to the inclusion of four characters from previous games (Akane, Junpei, Sigma, and Phi), it’s hard to even do so without spoiling the other Zero Escape games as well. The developers have nicely set things up so that the story is accessible to both newcomers and veterans alike, albeit not without a few iffy moments for either, but the thought alone is appreciated.

Much like its cousin series, the Danganronpa games, what initially starts off as a locked room mystery eventually goes off the rails big time, but the those games, it still does so while managing to be fun and insane while still coherent and surprising (that said, a particular twist involving Zero will either come off as a stroke of genius or an absolute “WTF” ass pull for some). Zero Time Dilemma explores various scientific theories, cases of probability, various experiments, quantum mechanics, and more, and again clearly enjoys itself while doing so. Although like the two games that came before it, apparently the words “layman’s terms” do not exist in the Zero Escape universe, as characters can go on for minutes all of a sudden about their theories concerning Back to the Future or the odds in a game of Russian Roulette that were just told to you seconds ago anyway.

But again, the story as a whole is the meat of the game, and some rather tasty meat at that. It helps that the nine main characters are again an enjoyable lot, each with their own backstories and motivations that you gradually learn, nicely told with decent voice acting, that help them grow on you even further. None of them struck me as being as memorable as the likes of Snake or Clover (save maybe for the kid in the helmet), but they fit into the series perfectly, and are fun to either play as or play with.

However, while Zero Time Dilemma’s story captivated me for well over twenty hours, I walked away with a slight bit of disappointment regarding its conclusion. Without trying to give anything away, it is easy to wrap up all of the puzzle rooms early and leave mostly just a batch of cinematics remaining, there’s no real “final” puzzle to serve as the climax like in the other titles, the epilogues are told entirely through text files you unlock after the credits roll instead of actually seeing them, and the game still leaves openings for sequels, in spite of those who wanted this game to exist as a proper conclusion to the story so far, instead leaving us with a touch of ambiguity. In other words, it doesn’t end on as big of a bang as you hoped for, but the fireworks prior were still damn good as well, so you can’t complain too much. 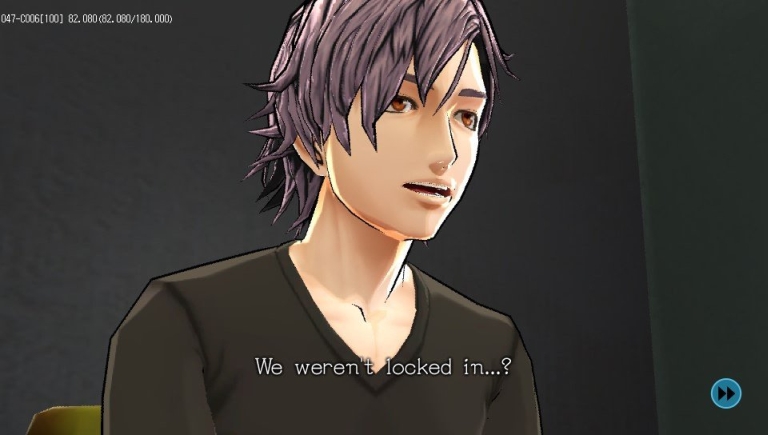 While it ends up feeling a bit like the weakest game in the series so far, even a weak Zero Escape game is still an absolute delight, and Zero Time Dilemma is no exception. Between the magnificent and bizarre mystery that keeps you captivated, the colorful cast of characters and the nicely perplexing puzzles, this is one for visual novel, puzzle and adventure game fans alike. Heck, it’s a darn good game for anyone in general and one that can easily get newcomers hooked enough to try the earlier games as well (which you absolutely should, of course). Some parts could use a bit more polish (maybe tone down The Walking Dead influences next time), but in the end, it’s safe to say that Operation Bluebird was a success.