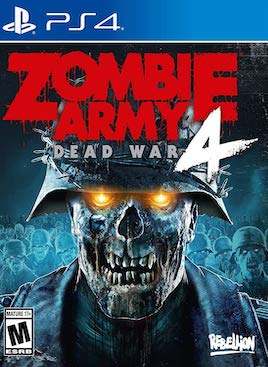 How far are you willing to forgive a game’s shortcomings no matter how persistent (texture quality, gameplay design) or briefly minor (variance in perks/abilities/add-ons) so long as the overall loop is one you take modest — if not immense — pleasure from? Does the lack of a complex system or splendor of visuals to gaze at deter you from something that is, in your opinion, enjoyable to return to? No matter the repetition or suggestion that the game’s well of content really isn’t that deep. It’s an interesting and murky field for debate in the realm of [written] reviews: what constitutes, to the player at that very moment, the notion of something being “good.” It’s an argument that’s not exclusive to the medium of video games of course, but in a form where objective and subjective feelings are equally relevant, Zombie Army 4: Dead War is the kind of game that proves that, much like beauty, playability is very much in the eye of the beholder.

Rebellion’s return to an IP that initially started as a spin-off of the studio’s much-respected Sniper Elite series is never too far away from a slow-loading texture here, an occasionally odd-looking enemy animation there or a general control scheme that doesn’t always gel with the frantic and desperate nature its gameplay so vehemently promotes and encourages. But just as Sniper Elite has proven so many a time, sometimes that crucial, clinical gameplay loop can carry an entire game through. Not to say that Dead War‘s flaws lie in some over-reliance and/or distraction. That it desperately wants (hopes, maybe) its players to not focus too much — if at all — on the technical side of things. Or that, like Sniper Elite 4 faltered in at parts, it’s unnecessarily difficult to get a proper button prompt to show and function fluidly upon first use. It’s important to touch upon these frustrations and to highlight where some should be cautious, if this is to be your first venture into a Zombie Army set-up. Let alone the kind of AA release Rebellion have proven themselves to be well-apt in, particularly from a gameplay front.

But the fact of the matter is that Zombie Army 4: Dead War still manages to toss these brief frustrations aside — embracing (to a point) its ridiculousness and arcade-like tempting a high (and even higher) score on repeated visits. It’s a shame that Rebellion don’t go all-in on the corny premise, instead trying to find this needless middle-ground between self-aware, just-roll-with-it nonsense and a campaign with straight-faced story beats. Limited instead to some comical usage of pinball machine sound effects at the results screen, ’80s synth chords interwoven during play and the regular tropes-at-the-ready slew of pulp horror that 2018’s Strange Brigade welcomed with open arms. And herein lies the question going into Dead War, now that that game is a part of the studio’s portfolio. How far will Dead War — a co-op favored, wave-after-wave, third-person shooter — go so as to differentiate it from Rebellion’s other co-op favored, wave-after-wave, third-person shooter? Are there valid concerns of repetition and a touch of the similarity here now that a new IP has, maybe, taken the reigns in this department? 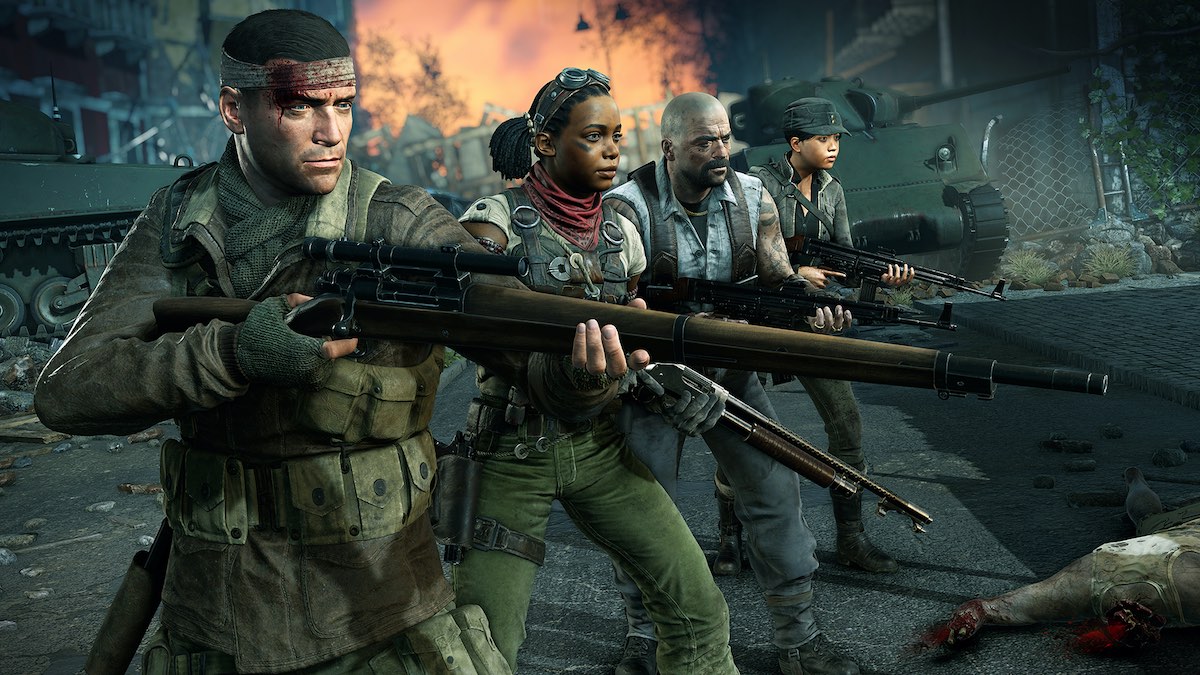 Perhaps the most notable difference this time round is the fact Zombie Army 4: Dead War seems equally tailored to those who want to go it alone rather than as a party. Unlike Strange Brigade, Dead War tends to better balance its level design and trajectory of progression, between tighter corridor-like settings and open surroundings. Surroundings that, thankfully, make good use of their space in providing a sand-box for players to improvise. Gone are the light puzzle-solving elements from Strange Brigade though, as is the general bright and lively environment design sadly. In its place, what seems like more a push for players to make use of the combo system. To master (exploit perhaps) the geometry of environments and maybe risk the overwhelming volume of zombies so as to have a better chance of a higher streak. A means at which players are graded by the end of each stage and a means which most of the time seems to force (rather than subtly encourage) players to repeat past ventures given how high of a demand it can be to attain the gold medal rank. How the only way to even get remotely close to gold rank — other than exploiting objectives so that zombies infinitely respawn in select moments of the campaign — is to sprint from one set-piece to the next. Knowing full well what “defend this spot” objective markers are the ones to activate the next incoming wave. Providing, of course, the combo meter does its part and doesn’t serve to make things harder than they should be (and we’ll get to that).

Progression on the other-hand is executed better if still tainted by a few unnecessary pieces of “filler” that serve to simply give the impression of a well of tactics on offer. Namely the three-grade perks you unlock the more levels you rank up to (and can upgrade upon fulfilling certain criteria) of which around only a quarter, if that, have any game-changing properties to recall. Why, for example, would I want to increase the length of time I can hold my breath whilst focusing down a telescopic sight in a game that seldom seems suited to that approach? While stuff like cosmetics and emotes are dispensable, it’s harder to ignore the many traits to unlock whose values and potential gains don’t do much outside of maybe giving every other bullet a chance to do double damage. When bullets, in their “base” state, work just as well. It’s still tempting to revisit, though. To retread past encounters in the pursuit of mastering all weapons, unlocking all upgrades and generally feeding on a completionist’s urges, and fortunately the questions on content itself, are balanced out with a sense one is still getting a steady stream of rewards and upgrade kits without going overboard. 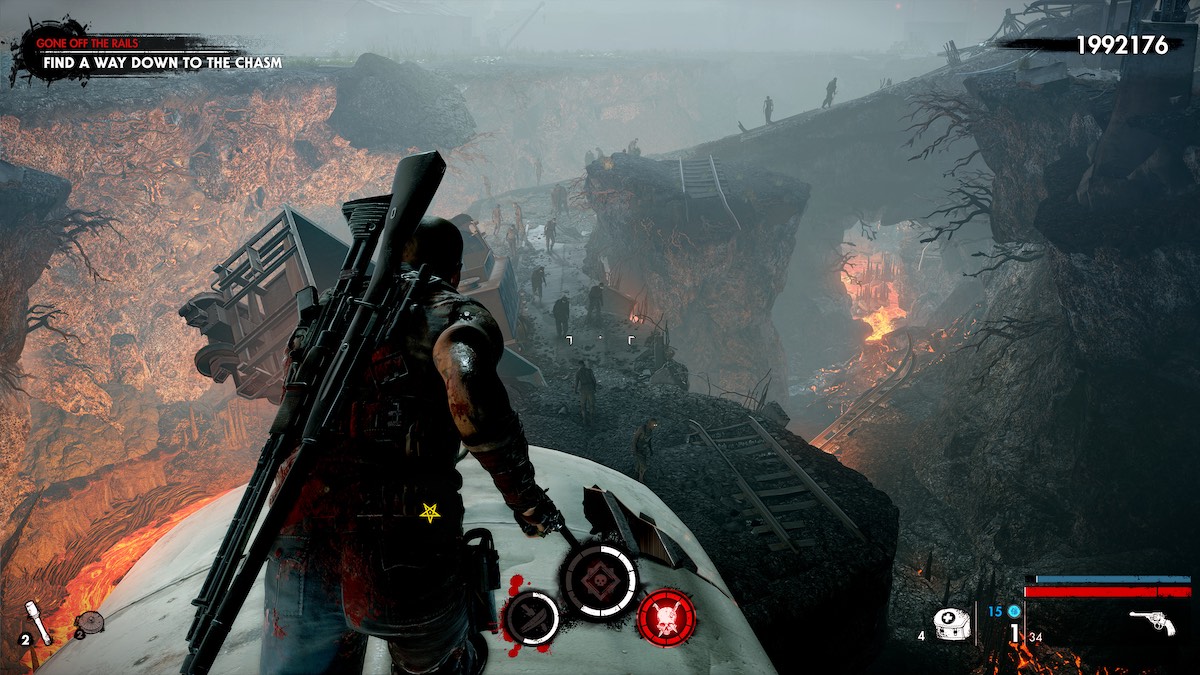 Like the Sniper Elite series, it’s still tempting to play around with the variety of weapons on show — figuring out if you’re the kind of person who works best with powerful-if-slow rifles or may prefer a secondary with slightly higher damage if a touch lengthier on the reload period. It’s nice too that each of the safe areas you visit (the in-between points amidst chapters) allow you to fully swap out your load-out if need be. There’s even a nice, welcome ability to carry over any heavy/powerful weapons you uncover on your travels — providing you still have ammunition left — over to the next section if still in your possession. Odd as it may be, especially for a game that may find all its focus on the relentless chaos on show, it’s nice to see Rebellion dedicate sufficient attention and care into making the smaller moments worth it. Sound design especially giving weapons an immensely satisfying impact and presence — the metallic clunk of a rifle as you land a head-shot or the booming roar of a handgun. Fueling the need to survive sure, but to do so in that kind of voluntary lunacy that Strange Brigade captured and at points flourished on.

It shouldn’t be overlooked just how Dead War manages to pit the nature of the high score as a fundamental part of the experience. If only the mechanics underscoring it didn’t feel like Rebellion slamming their thumb down on the scales to, at times, unfairly pit things a little too much against the player. The way you’ll get a “miss” indicator on your combo meter (given hitting an enemy is enough to keep the combo going); how the meter may even disappear altogether at seemingly random, inexplainable points. A pain when you’re past the x50 stage and have a steady stream of zombies heading your way. Of all the design choices in Dead War, the nature of the combo meter — and how it seems to play by its own rules, even rewriting the rules on a whim — comes across a tad like Rebellion’s aversion to players making their own risk and potential reward. 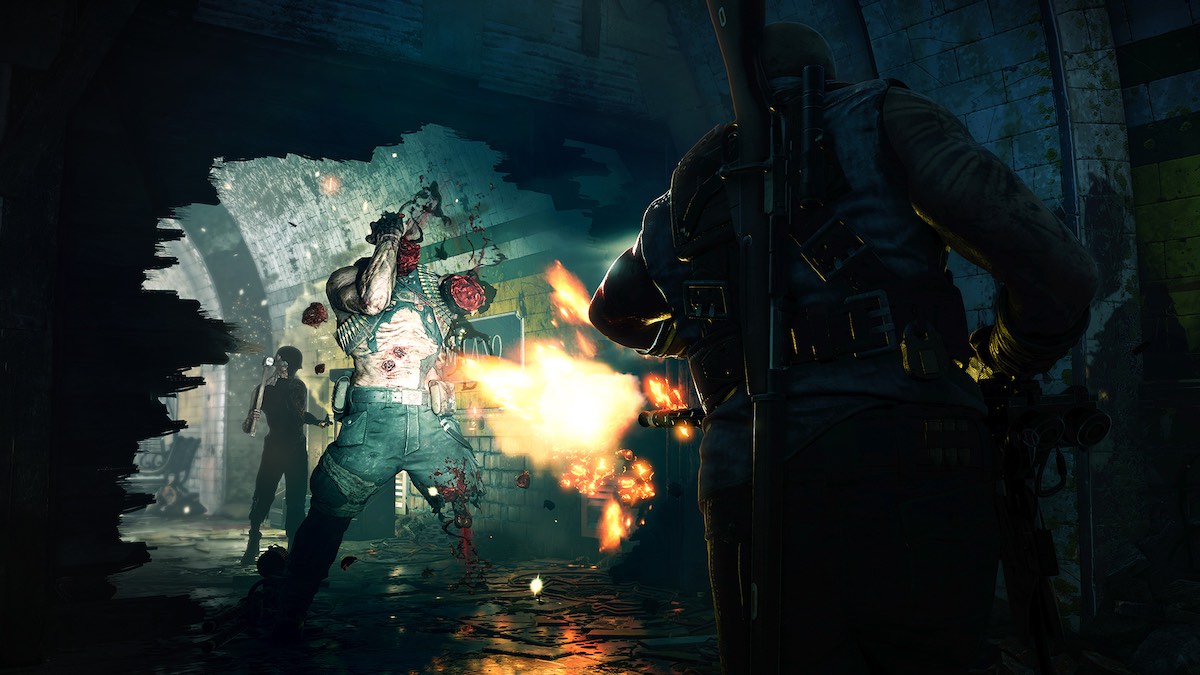 There are some other design choices that, while not as damaging or annoying to the moment-to-moment proceedings, do make the experience more frustrating than it should be. The lack of an in-game map — despite the game’s effort to pick out objectives or indicate the direction of off-screen zombies near your position — can mean some foes like the exploding kamikaze-style zombies slip through unnoticed. Incurring an unforeseen death or two, despite your best efforts to begrudgingly keep focus on a swivel. Item boxes too — more crucial given how quickly you are to run out of all types of ammo in this game — could have also done with an icon or indicator. Hard as it is to spot the plain-looking boxes in some environments that paint the aesthetic in those same drab grey-brown color palettes. Moments where even zombies are hard to spot, when the game isn’t intentionally veering into faux-horror, darkened corridors or the like.

And as noted, rather than sticking to a tap or hold function for all commands, Dead War sees the necessity to have some items require one and others the latter. Again, in the heat of the moment — especially when you’re sprinting back and forth, keeping both ammo pool and combo streak in check — it’s frustrating having to wrestle with character controls (which aren’t the most responsive) and shifting command prompts. That involuntary slowing down of pace extends to such things like items indicated by text (always in that same tiny red font) as opposed to icons. For all the game’s encouraging players to push through in anything other than a steady pace, it’s odd that such things were either overlooked (item text) or unconvincingly forced (multiple button prompts). 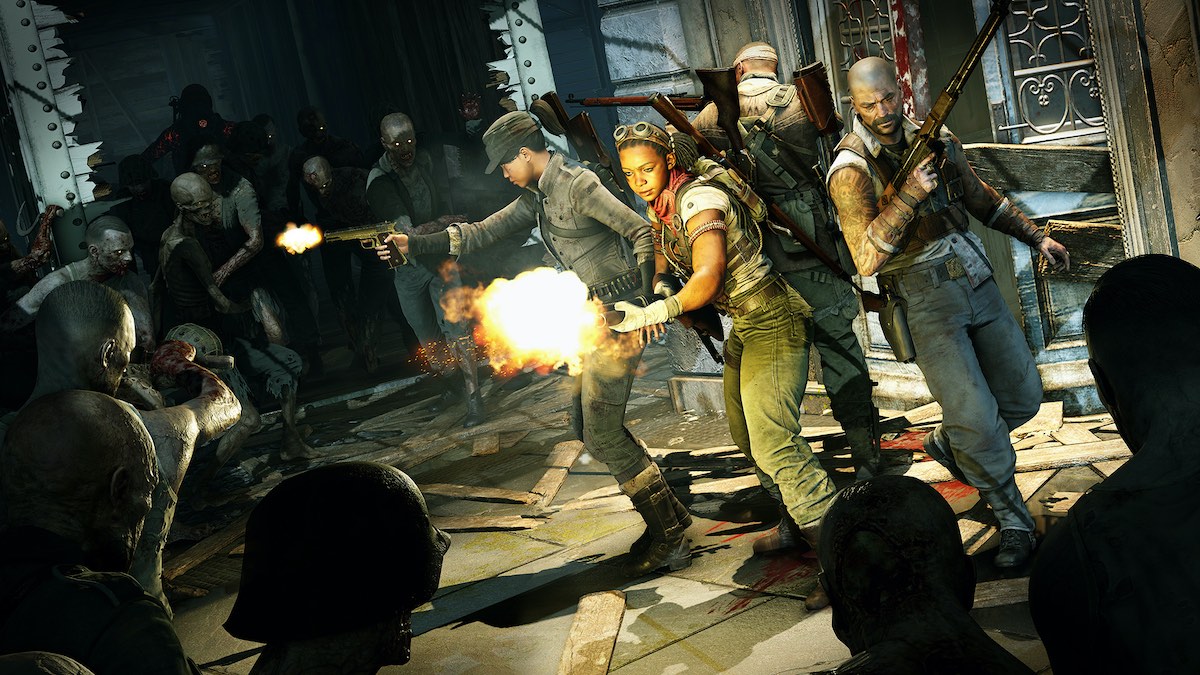 You could very well copy-paste the conclusion to our Strange Brigade review when summing up the up-and-down nature of Zombie Army 4: Dead War and in one respect that does draw attention as well to this game’s general relevancy. Even so, the short, and many, bursts of fighting back the hundreds-upon-hundreds of the undead remain a simple but satisfying loop that doesn’t tire. With what appears to be a clearer focus on maintaining combos, the game does just enough to avoid the repetition — though present — turning stale. Instead, to a point, embracing the ridiculousness of its set-up if not fully committing to it. But for every opportunity to let players loose — to additionally experience that additional touch of detail that makes it all the more sweeter to jump head-first into — Rebellion do shoe-horn in a mechanic or design choice that doesn’t always work in the player’s, or indeed the game’s, long-term interests. While cumbersome controls and an oddly-behaving combo meter can betray the underlining intention of pace and of orderly chaos ruling over, Zombie Army 4: Dead War does just enough to shun these unfortunate moments. Players voluntarily, not forcibly, involving themselves with such madness with sufficiently-positive results.