It turns out that giant insect alien invasions are like buses — you wait years for a new Earth Defense Force then get two in three months.  While EDF5 was exactly what one would hope for in a sequel, EDF: Iron Rain was looking like a bit of an oddball for a couple of reasons.  First, it’s the second EDF not created by the original series’ developer Sandlot, and there’s no question that Insect Armageddon was more than a little disappointing.  The other aspect that raised eyebrows is Iron Rain being developed with western audiences in mind, which looked by the screenshots as meaning more militaristic and less colorful.  Last month’s trailer helped put a few uneasy feelings to rest, showing the new entry not losing a bit of the insanity that makes the series so much fun, and a new character class replacing the Air Raider looked to fit in nicely with the rest of the cast.  I recently was able to play Earth Defense Force: Iron Rain and came away impressed and optimistic, so with the video below as your guide here’s a walkthrough of everything I got to see.

The first part of the video is actually the second level I played, but it’s the earlier of the two so the first one I’m showing off.  If I die a few times it’s because I didn’t realize until later I was playing on Hard, which as any EDF veteran knows is best saved until you’ve built up a few decent weapons and buffed your health a bit.  Based on starting with 1600 health (and a nice arsenal to choose from before starting the level) it seems likely the preview build was designed to make it hard for writers of unknown skill levels to die if they played on Normal, but Hard is never going to be particularly forgiving.

The level starts with your custom-designed character swooping in and for this level I chose the all-new character class of Prowl Rider, who has a zip-line to shoot quickly across the map, Just Cause-style, plus a special ability to call in a giant insect mount.  The character classes in Iron Rain are actually different types of armor you can swap out between missions, rather than individual characters who level up independently of each other like the main series.  You’re playing as Closer, an elite EDF soldier who got knocked into a coma at the start of the conflict and was out for seven years.  Awake and ready for battle at last, Closer is reintroduced to a world that’s very different from the one they left behind.  Not only have the invaders done a number on the planet, a splinter group of former EDF soldiers has lost confidence in the military command and broken away to fight the aliens on their own terms, and possibly cause trouble for the EDF too.  Iron Rain promises more of a focus on story than the main series, with a more diverse cast of characters giving multiple viewpoints on the fight to save the Earth.  In the missions I got to experience, however, the story still runs like a radio play without getting in the way of the action for even a second.

Which is probably for the best, seeing as the bugs don’t wait for the dialogue to stop before attacking.  In my first crack at the level I chose a homing laser which couldn’t be reloaded if it ran out of ammo but offset that potential issue by having a couple hundred rounds charged and ready, which in theory should be more than enough.  I also couldn’t resist going for the sword, which projects a low-range slashing wave if you don’t want to get within touching distance of hideous insect monsters.  Many of the creatures have a revenge attack when defeated, such as the stink bugs generating a massive explosion or, as I found out by being taken down by one, the giant robots who’ll crush you as they fall. 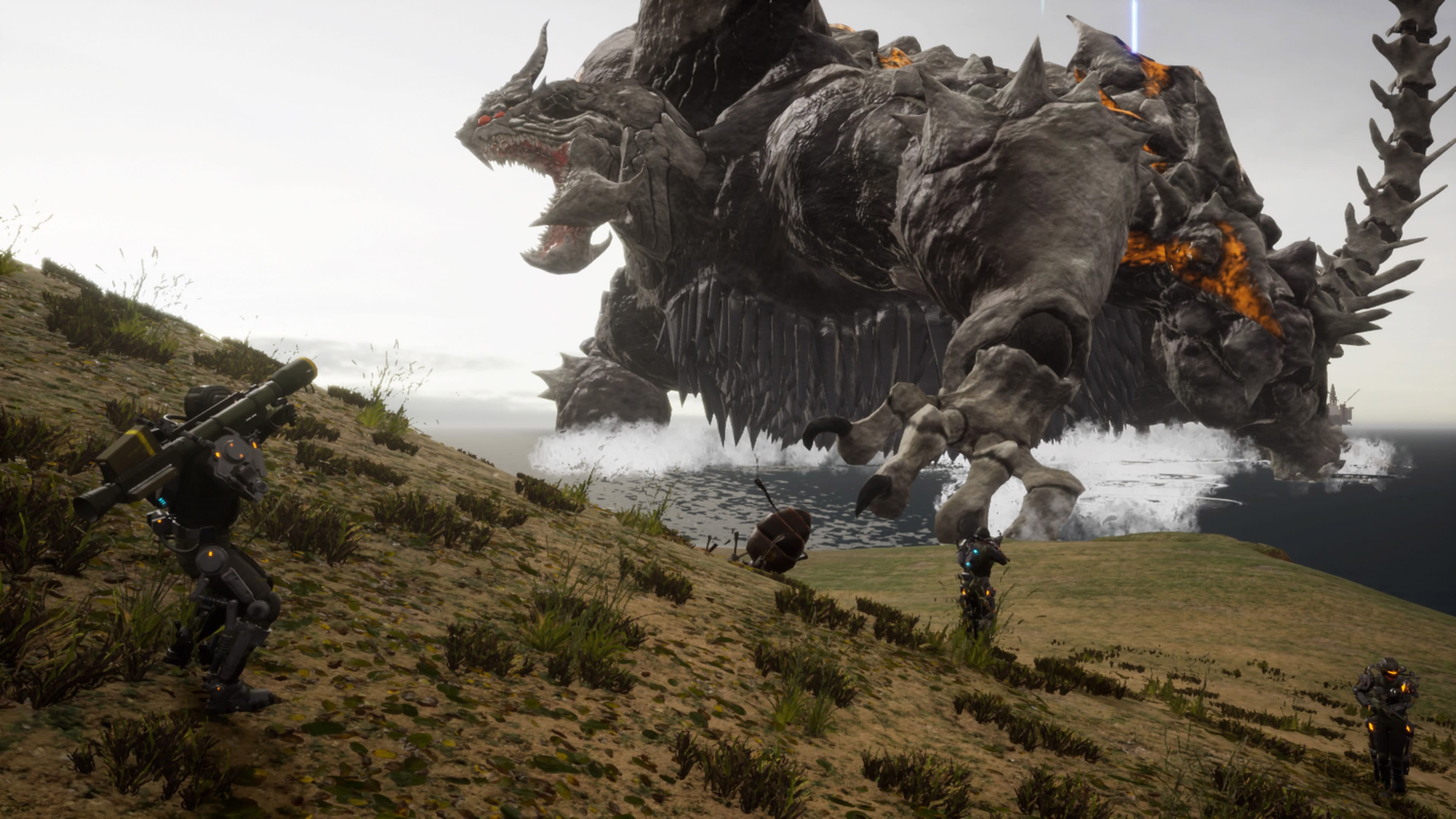 While the aliens attack in large numbers, the new EDF has more battle options than ever.  Each of the four character classes has an Overdrive ability, its own unique mobility skill (flight, zip-line, etc.), plus a good number of items to use in battle aside from the standard two-weapon loadout.  Items are helpful but also expensive, eating away at the mission reward on the end-of-level screen.  Even health packs and grenades can chip away at the reward if you’re not careful.  Basic ammo may be free but everything else costs, so you’d better be sure the value of saving the world is worth the expense before calling in that tank.

Once you beat a level the next new feature kicks in, which is the rank-based reward.  The payout is based on level completion speed, how much damage you took, Technical Score (which I’ll admit to not having a clear definition of) and percentage of gems collected.  Gems replace item boxes from the main series as the enemy drop, and they come in blue, red, yellow and green.  The green ones are health, used instantly on collection, but the rest get banked to buy new weapons back at the loadout screen.  Weapons cost both money and a pile of the right color gems, and while I didn’t get to sample the heavy-arms economy, it doesn’t seem like it should be too hard to build up a nice, varied collection.  It’s also worth noting that any weapon you buy is usable by each of the four character classes, so you don’t need to worry about going broke picking up a whole new arsenal if you decide you want to experiment a bit. 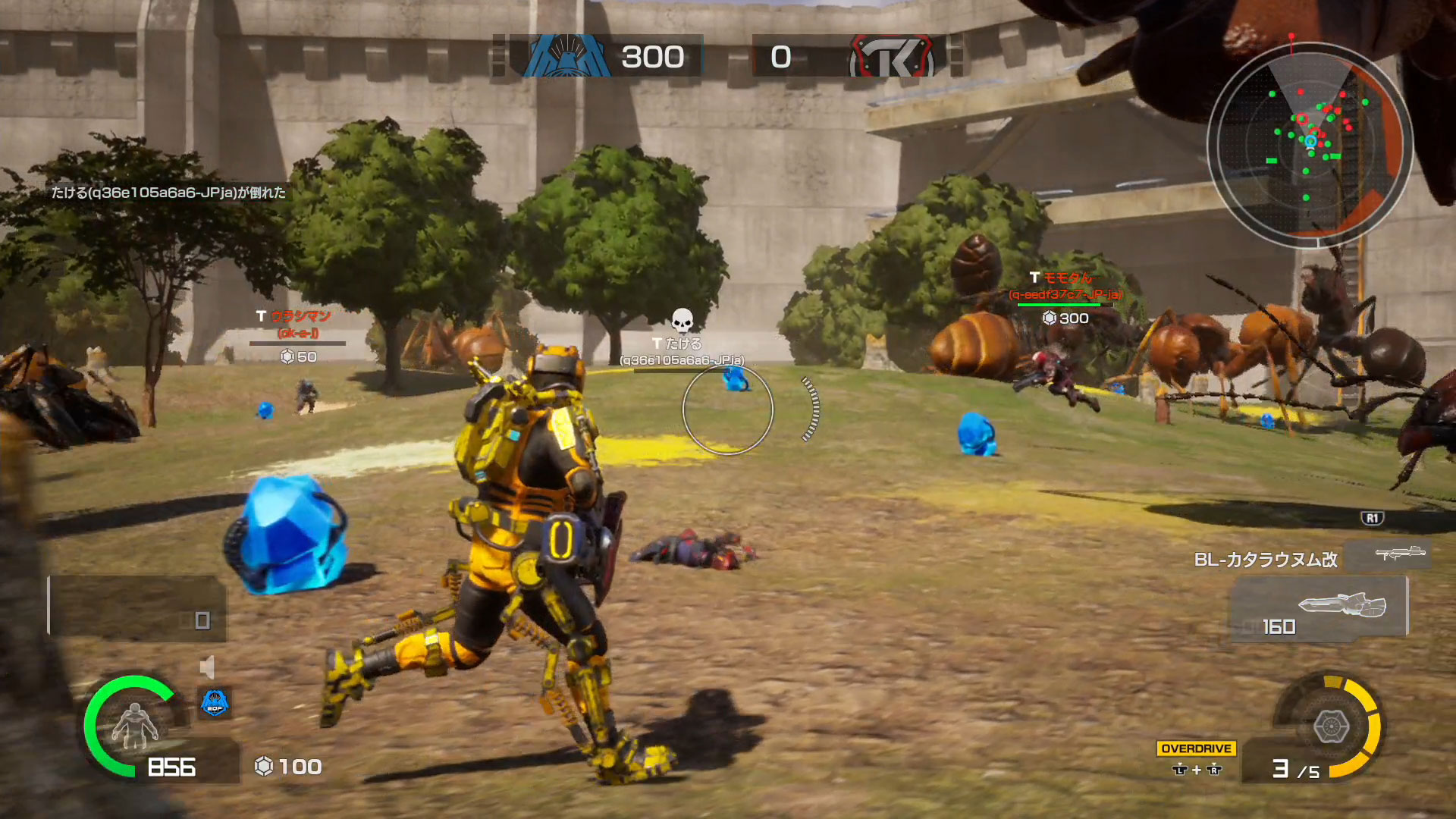 The gems also play a major part in Iron Rain‘s competitive multiplayer mode.  While the standard co-op campaign is of course available, for the first time in the series you can compete against other players.  The mode I sampled was set in an arena that started out filled with buildings, but seeing as they’re as destructible as you’d expect that doesn’t last much beyond the middle of the second round.  Enemies teleport into the arena and two teams of two players each work together to take them down, then fight over the gems the monsters drop to deliver them to a helpful (but slow) robot.  The robots come in several different types, useful for healing, scoring or weapon upgrades, and they don’t care which team uses them.  Get shot down in the middle of a gem deposit?  That’s a great way to leave a nice pile of loot right near the banking-bot, simplifying the opposing team’s life immensely.  Through each round enemies keep on appearing, though, so there’s a good chance of retrieving the gems if your opponent gets greedy.  There’s nothing like waiting for the bank’s deposit gauge to fill up while a battalion of giant robots plus a handful of not-Godzillas start firing on you to make every tenth of a second feel like a generous slice of forever, and it would be even more tense while your teammate tries to hold off both monsters and a pair of human opponents.  We were all seeing this for the first time, though, so teamwork and strategy didn’t get a chance to kick in.

Earth Defense Force: Iron Rain is a different flavor of EDF but still retains the feel of the core series, even if its insanity is lightly covered by a more serious art style.  The difference between the main series and Iron Rain is the latter being a push towards appealing to a more mainstream non-Japanese audience, and the parts I played seem like they can pull this off.  The character customization options, multiplayer modes and unified progression system that doesn’t make you basically start over if you want to experiment with a new character class are all features that help with accessibility, and the bigger push on a story should give the action more weight.  Earth Defense Force has been building fans and momentum since its debut as a budget third-person shooter back in the PS2 days, and with any luck Iron Rain can push the over-the-top action to a new and receptive audience.