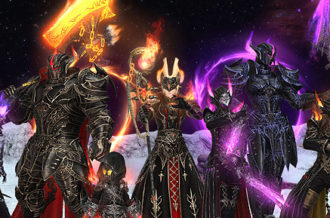 The PS4 launches in Japan on February 22.  It is an exciting time to be a PS4 owner in Japan as Sony has some awesome games planned for release in the territory.  In fact, it has so many games that it took not one, not two, but three trailers to fit everything in.

The trailer highlights some pretty obvious titles like Killzone: Shadow Fall, Knack, Battlefield 4, FIFA 14, NBA 2K14 and Call of Duty: Ghosts among others.  However, the line up isn’t just limited to games releasing on February 22.  Sony has also thrown in upcoming titles that are sure to please the Japanese audience.  Final Fantasy XV, Kingdom Hearts III and Final Fantasy XIV: A Realm Reborn (whose beta will be available at launch on PS4) are all given screen time.

Pretty much all of these titles will also release in the West.  Japan has been waiting eagerly for its chance to get their hands on the PS4.  Sony opted to release in the West first to better compete with Microsoft’s Xbox One, which caused the Japanese release date to be pushed back into 2014.

Check out the PS4 Japanese line up below: